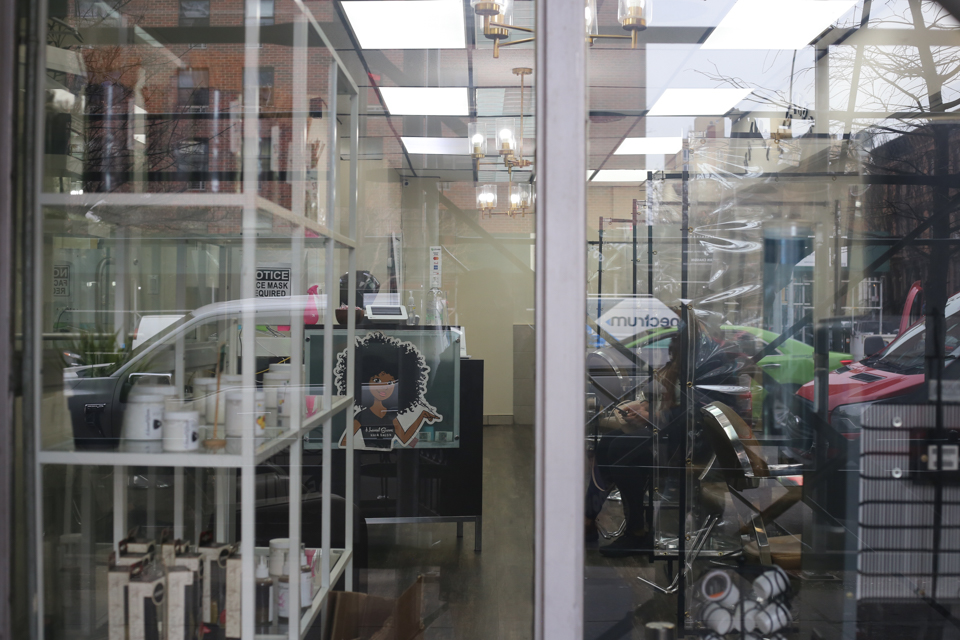 It is no secret that beauty, skin care, and hair care play a large role in making women feel confident and empowered. In a society where beauty has long been correlated with Eurocentric features and whiteness, the media often does not represent women of color as traditionally “beautiful.” Makeup advertisements, magazine covers, and Barbie dolls disproportionately feature straight hair and white skin, which sets a standard of beauty that excludes Black women with dark skin and natural afro-textured hair.

In Harlem, however, salons owned and managed by women are working to make Black women feel empowered by—and not ashamed of—their natural hair and dark skin. These establishments—from African braiding salons to skin care companies designed for women of color—fill a gap in the beauty industry and empower historically underrepresented women.

At 148th Street and St. Nicholas Avenue is Harlem Natural Hair Salon, owned and managed by Paula Broadwater. Broadwater established her salon because she had trouble finding salons that would take braiding appointments for her two daughters and that could treat her husband’s locs. She opened Harlem Natural Hair in January 2016 to fill this niche for her community.

Broadwater recalls that natural, textured hair has not always been seen as beautiful in American culture.

“The unfortunate thing is that, through time, we have been conditioned to believe that our own natural hair is not a thing of beauty, that it is something that we need to manipulate to look like somebody else’s standard of beauty,” she said.

Even though natural hair was not celebrated in mainstream media when Broadwater was younger, she is excited about its future. She believes people have moved past the “Madam C.J. Walker days,” during which Black women were encouraged to straighten their hair to look “neat.” Madam C.J. Walker was the first Black female millionaire in America, known for her cosmetics and hair care products, and she operated a beauty salon in Harlem in the early 1900s. Broadwater believes society is transitioning from this era into a moment when women with textured hair are taught to embrace it.

“Now we can wear our hair in curly afros, in the way our hair naturally looks, and just embrace it and look beautiful and feel confident about who we are,” Broadwater said.

Fola Sade, who owns Omo Sade Skincare, also felt discounted by Eurocentric beauty standards when she moved from Nigeria to the United States. Sade’s skin care company, located on 126th Street and Madison Avenue, aims to educate women of color about makeup techniques and encourages them to embrace their natural beauty.

“I was born in the early ’60s, where ‘Black is beautiful’ was starting to become something, but being an African, it had never been a question. … Coming here [from Nigeria], I realized that there was no avenue or media that reflected back to you your own innate natural beauty. I felt the need to fill that in,” Sade said.

American media representations of beauty looked nothing like her, and Sade wanted to redefine what beauty meant on her terms. Sade recalled how even the naming of certain shades was steeped in Eurocentrism.

“In my generation, anything called ‘flesh-toned’ was literally white people’s flesh, as if no other flesh existed,” Sade said.

At Omo Sade Skincare, customers will find makeup in a variety of shades for dark skin and organic traditional skin care products from Nigeria. According to the website, products like the traditional oil and natural soap use the “power of traditional Yoruba skincare remedies to make them relevant and useful to women of color in the African Diaspora.”

A 12-minute walk west of Omo Sade leads to Natural Sisters Hair Salon on 123rd Street and Adam Clayton Powell Jr. Boulevard. At Natural Sisters, Kendra Watson helps manage the salon that her father, Kenroy Watson, owns. She, her three sisters, and her brother have natural hair, so the family established a natural hair salon in Harlem that focused on healthy hair growth.

“We thought, ‘Why not bring something new to the community [to give] them the best hair growth regimen?’ So when we established the business, that’s when it kind of blew more than what we anticipated because not a lot of salons offered the same service,” Watson said.

“Once we practice having healthy hair, we feel good about it,” Watson said. “A lot of people do anything to their hair to make them feel good, but it damages their hair.”

North of Natural Sisters Hair Salon on 147th Street and Adam Clayton Powell Jr. Boulevard is Curl and Co Hair Studio. Curl and Co’s mission is similar to Natural Sisters, as both place a strong emphasis on hair health. Curl and Co offers a variety of services from wig creation to weave installation and loc maintenance. According to its website, “clients leave feeling gorgeous and confident about maintaining their beautiful, healthy hair.”

Head south again along Adam Clayton Powell Jr Blvd, and you will encounter Felicia Michelle Hair on 127th Street, where Michelle, a freelance hairstylist, has been styling hair since she was 15. She works as a “textured specific” stylist who can style all textures of hair and educate women on how to care for and embrace their locks.

A seven-minute walk southeast of Aminata leads to Honey Salon on 119th Street and St. Nicholas Avenue, specializing in precision cuts, hair extensions, natural hair and styles, and silk presses, according to its Instagram.

Broadwater noted that she used to feel that Harlem did not have enough natural hair salons, but all of the new salons within Harlem indicate a shift in attitude. “Everybody’s now seeing the beauty in what different textures look like,” she said.

Women in Harlem are responding strongly to the 21st-century iteration of the natural hair movement, as more natural hair salons and treatments appear, makeup companies increase their shade options, and women everywhere are left feeling more empowered and confident in their skin.

“Thirty years ago, there was nothing representing even a dark-skinned Black woman, let alone to say that she’s beautiful,” Sade said. “So we needed to start that story, we needed to get the next generation to realize their skin that they’re in is beautiful.”