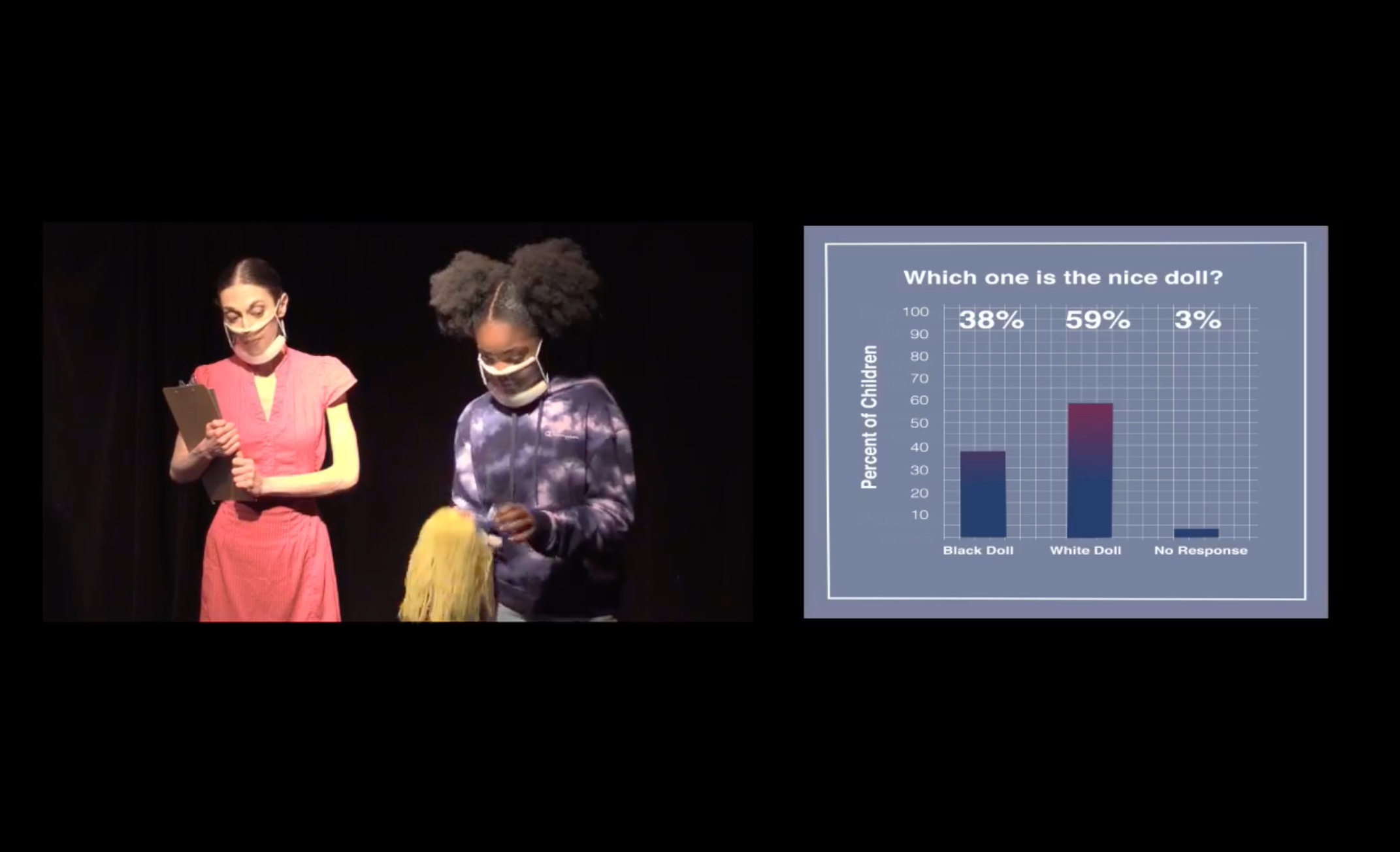 On Sunday, the Center for Science and Society premiered “Happy Tuesday,” an interactive new play by Juan Guerrero, GS ’19, that uses psychological research to analyze the divided local response to a newly opened homeless shelter in Hell’s Kitchen.

The cast members freeze mid-sentence, their concern and anticipation visible through clear plastic masks. Suddenly, the screen lights up with a multiple-choice question: “What would you do?”

On Sunday evening, the Center for Science and Society live-streamed  “Happy Tuesday” on Facebook: an interactive play written by Juan Guerrero, GS ’19, and co-directed by Guerrero and Ashley Calderón. Set in the gentrified neighborhood of Hell’s Kitchen, the play dissects a divided response to the opening of a homeless shelter. By displaying study statistics on a split-screen and opening up the characters’ moral decisions to the audience through Facebook polls, Guerrero stages psychological research as an accessible new genre—one unimaginable in the days of pre-digital theater.

The play follows the lives of two families over the course of one week: Lemarcus and his eight-year-old daughter, Aniyah, who have just moved into the shelter; and psychology professor Alistair and his fiancé, Charlie, who owns the struggling restaurant next door. Happy Tuesday refers to an upcoming state senatorial election that will determine whether the district reroutes the budget away from the shelter and toward an increased police presence. Every statistic leads up to the Tuesday election, informing both characters and viewers that the anxiety they feel around their homeless neighbors is a learned response.

Far from feeling stilted or dry, Guerrero seamlessly incorporates research findings into his characters’ dialogue. “Happy Tuesday” is just as much about the beauty of names as it is about name-based hiring bias, as much about love and faith as it is about conditioned fear-responses.

Guerrero’s portrait of Lemarcus is particularly moving. He illustrates the constant, painstaking care required to protect his small daughter from internalizing racial bias. We watch as Lemarcus rushes to switch off the news, shielding her from endless warnings of suspects falsely identified as “dark-skinned,” and from a local segment on an elementary-school girl’s “rebellious and distracting” hair. While explaining to Aniyah that her grandmother has passed on, Lemarcus provides her with an invisible kind of love and support:

“She’ll live inside of your heart forever,” he says. “And if you listen closely, you’ll be able to hear her in difficult times.”

Lemarcus’ storyline also demonstrates the near-impossible challenge of climbing out of homelessness. Unable to afford formal clothing for a job interview, he reluctantly shoplifts a white button-down shirt. Later, the shirt’s security tag pops while Lemarcus dresses inside of a cramped public restroom, drenching both the shirt and his stack of resumes in black ink.

When he manages to reprint them, Lemarcus switches his first name to Mark—a decision that gets him hired at Charlie’s restaurant. We watch Charlie eliminate résumés purely based on how “white” or “Black” the name sounds, sharing the screen with data from a labor market discrimination report.

Yet “Charlie” is not his real name either. Upon moving from Venezuela to New York, his drama teacher told him he would get more auditions with a less “in-your-face” Spanish name. He and Lemarcus trade stories, bonding over how they gave up “Carlos” and “Lemarcus” for better chances of employment. Here, Guerrero deconstructs Charlie’s implicit biases: The honesty and vulnerability created in that moment finally makes him reconsider his position on the homeless shelter.

The audience never hears the results of the state senatorial election. Instead, Guerrero situates the play as an ongoing decision-making process that will not end with any one vote. “Happy Tuesday” challenges the audience to probe the uncomfortable difference between their behavior and their ideals. Guerrero guides the viewer through stacks of research, carefully identifying moments of cognitive dissonance. Crucially, he renders this research not only accessible but actionable: The play pulls important concepts out of abstraction until they are on our doorstep—and then he leaves us standing in the voting lines.