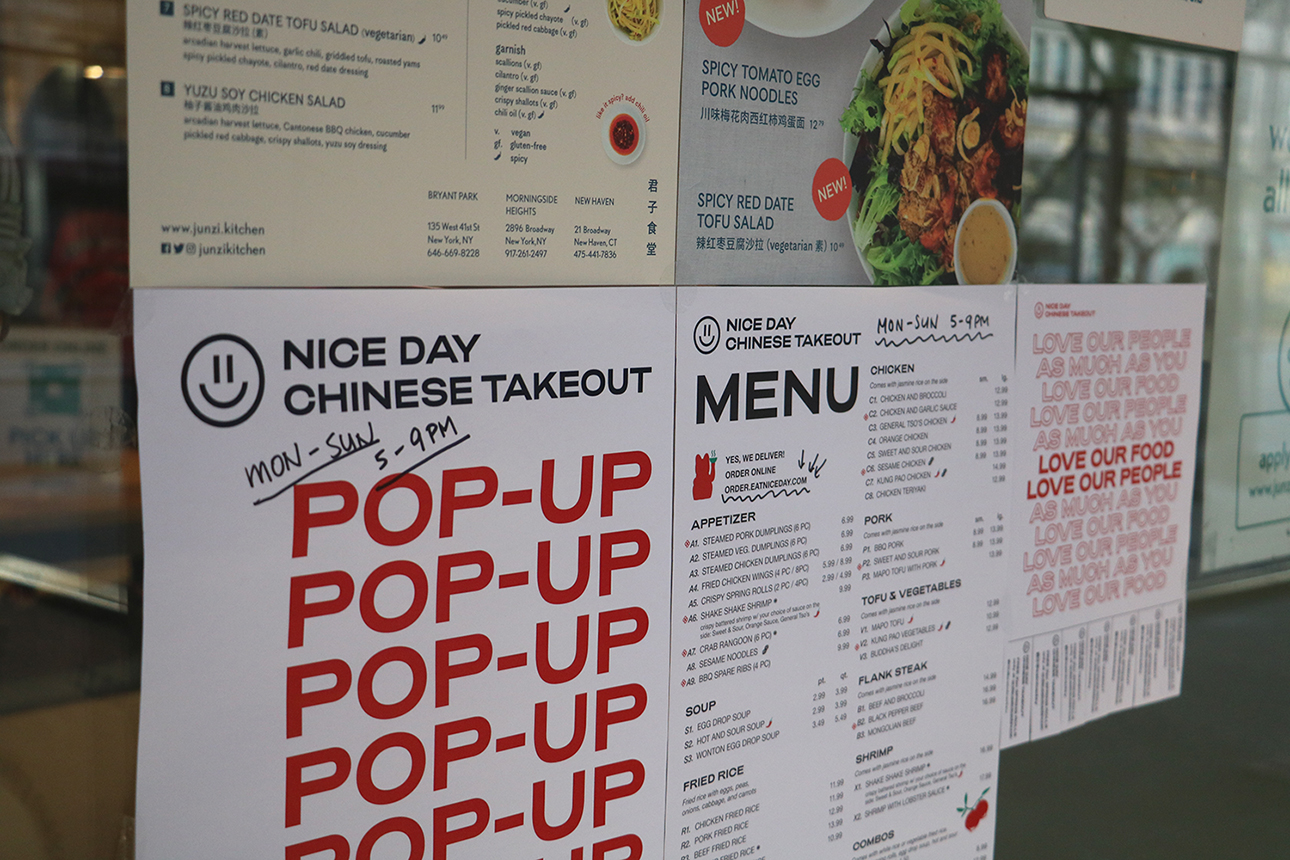 Images of Chinese takeout are ingrained in the memories of Americans. White takeout boxes have been turned into purses. Fortune cookies are craved for both their sweet vanilla flavor and foreboding messages, but one of the most prevalent images associated with Chinese takeout is plastic takeout bags that read, “Thank you” and “Have a nice day.”

Nice Day Chinese Takeout is run by the same team as homestyle Chinese restaurant Junzi Kitchen, which opened near Columbia in 2017. As a result, Nice Day will share a kitchen space with Junzi, and customers can choose which menu they would prefer.

“During the day, the kitchen is going to be open, and in the evenings now, both Junzi and Nice Day are both going to be open,” Lucas Sin, chef and vice president of Culinary at Nice Day Chinese Takeout, said. “Basically, we’re going to be running a shadow or secret or side restaurant inside of the restaurant that is also operating and cooking its own menu.”

One of the challenges of having a restaurant with multiple locations is that the food must be consistent in quality and taste. This is made easier by the fact that most of the chefs working for Nice Day are familiar with the flavors of classic Chinese American food. These chefs have grown up cooking and eating sesame chicken, General Tso’s chicken, and crispy spring rolls, so they know the basic flavors.

“Lots of our staff members, they are the consumers who grew up with American Chinese [cuisine], and they’re not Chinese,” Yong Zhao, CEO and co-founder of Nice Day Chinese Takeout, said. “They never think one day that they could cook this kind of food because usually it’s all the same family doing so.”

This conversation is particularly relevant when thinking about the rise of anti-Asian violence throughout the country. Chang felt that Nice Day needed to give customers and fans words of comfort in a time of distress.

After seeing one of its usual Junzi customers holding a sign that read “Love our people like you love our food” at a protest, the Nice Day team decided that those words would be the perfect message for its company to release.

On March 22, Nice Day posted a photo on Instagram with those exact words. In the future, it plans on selling merch with the design. In addition to this initiative, Nice Day currently supports Heart of Dinner, which offers meals to elderly Asian Americans; Send Chinatown Love, an initiative to support Chinatown small businesses; Center for Urban Community Services, a non-profit combating poverty and homelessness; and the Bowery Mission, dedicated to serving homeless people.

Until the merch is released, customers can support Nice Day by buying its food. One of the most popular dishes at Nice Day is its General Tso’s Chicken, which had 15 different versions before it was perfected. This dish has unclear origins and seems to have an almost “mythical” taste, according to Sin, but remains a staple of Chinese American food. Other fan favorites include chicken dumplings and Mongolian beef flank steak.

“You hear often, disappointingly, that people call [Chinese American food] not real Chinese food, but I think the first step comes from understanding that Chinese American food is real Chinese food,” Sin said. “That it is delicious, and the history behind it means that it was developed specifically for the context of the United States. They were putting together this cuisine that can only exist in the U.S., and I think that’s worth celebrating.”