Chef Adriana Urbina: A tale of perseverance and triumph in the food industry

Chef Adriana Urbina: A tale of perseverance and triumph in the food industry 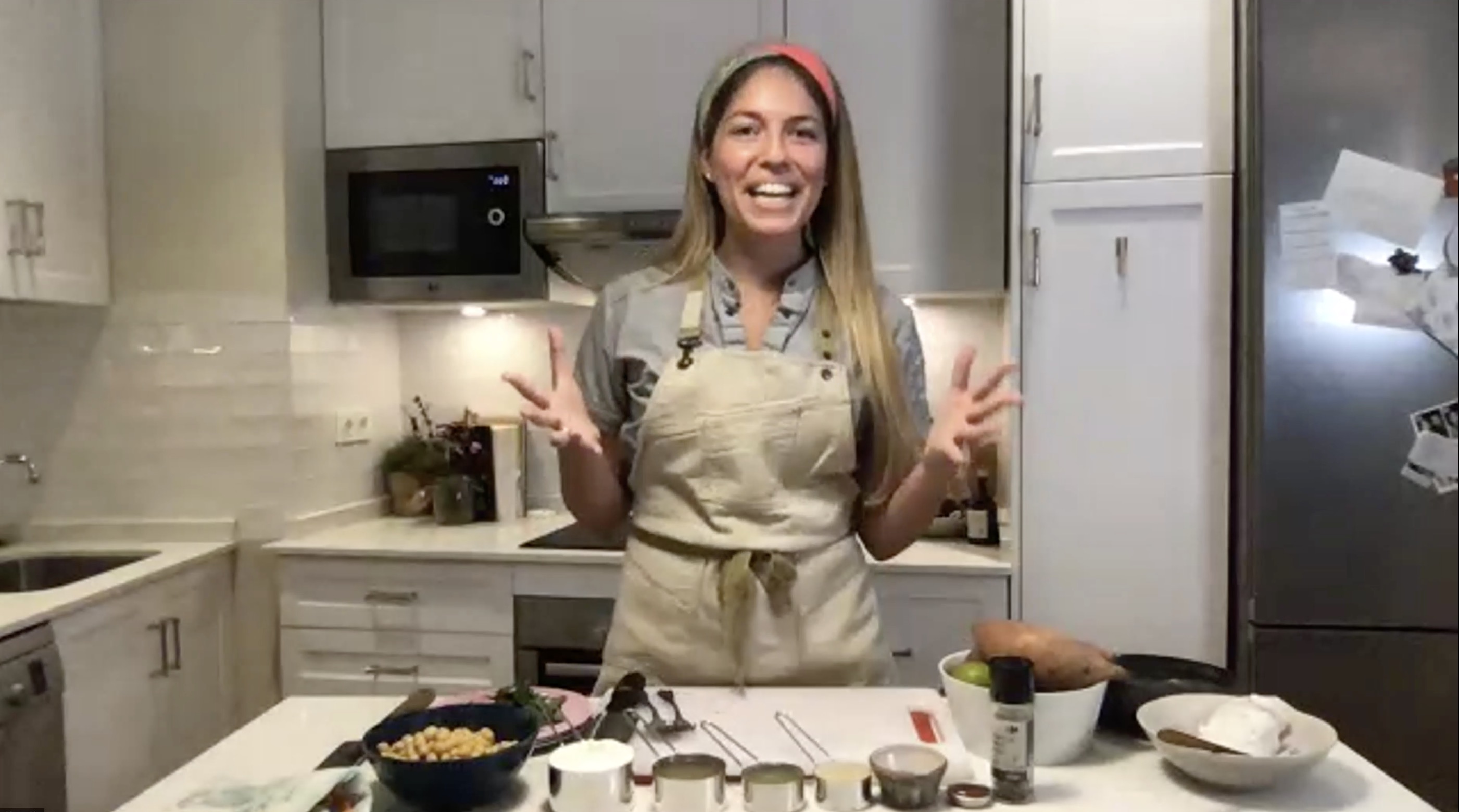 With a smile and infectious enthusiasm, chef Adriana Urbina spoke with the Barnard community about her experiences within the food industry.

With a bright smile and infectious enthusiasm, chef Adriana Urbina cuts slits in a sweet potato before placing it into the microwave. In a bowl, she mixes chickpeas, yogurt, and lemon juice together. To finish off, she breaks mint leaves into tiny pieces for a garnish on the top. The end product is a nutritious dish she makes multiple times a week: chickpea-loaded sweet potatoes with lemon tahini.

“I have a huge passion for food,” Urbina said at the start of the session. “First of all, because I love to eat, that was the reason why I started my career in the food industry.”

Over the years, Urbina has had an eclectic variety of experiences in the food industry. Hailing from Caracas, Venezuela, Urbina studied and refined her skills at top international culinary schools such as L’Ecole de Cuisine Alain Ducasse and Sumito Estévez’s Instituto Culinario Caracas. She went on to serve as an apprentice at Michelin three-star restaurant Martín Berasategui in Spain. In 2011, she moved to New York City, where she began Tepuy Dining, her private, pop-up dining company. Over the past 10 years, she has served as executive chef at the Nolita eatery De Maria and won the critically acclaimed Food Network series “Chopped” three times—the only Latin American female chef to do so.

In order for viewers to engage with Urbina’s class, meal kits with the necessary ingredients were provided for purchase via the Boost mobile app. This allowed students to prepare the recipe in their dorms while watching the demonstration. A central element of Urbina’s cooking style is her emphasis on maintaining sustainable practices and prioritizing seasonal and local produce. With ingredients such as sweet potatoes and mint, Urbina’s recipe produces a quick, flavorful, and nutritious dish that can easily be prepared in advance.

“What I love about this recipe is that it has a little bit of sweetness [and] acidity. You feel stuffed like you had a full plate of pasta, which is great because you feel full, and it has that touch of herbs, which is very nice and balances out all the flavors,” she said.

Once the cooking portion of the event concluded, Urbina proceeded to answer audience questions about her personal experiences as a female Latin American chef. Growing up, Urbina never expected to become a chef because the position was rarely sought after at the time in Latin America. Nevertheless, cooking became one of her greatest passions. With an architect for a mother and an artist for a father, Urbina found her own creative space within the kitchen.

“I loved the way that I connected with myself and with the world through food,” Urbina said. “I love making people happy through something that I made with my hands.”

When reflecting on her early career, Urbina spoke of her doubts surrounding making it in the industry as a chef. She knew little English upon first arriving in New York, which inhibited her ability to effectively communicate in the workspace and speak up for herself. She also found it difficult to work her way up in the restaurant industry and actively sought to change this reality.

“I figured that the most important things in life to succeed is working on yourself, working on your self-esteem, working [on] feeling confident,” Urbina said. “When I discovered that and I started working on that I was free.”

Urbina also remarked on how building a community of support was what helped her the most over the years. She draws inspiration from the women in her life who she considers to be her mentors, such as her mother, grandmother, and sister.

Another central element to Chef Urbina’s journey is perseverance. After beginning her pop-up dining experiences about nine years ago, Urbina began to write to a number of food magazines asking for her work to be featured. For a while, nothing came from these inquiries. After two years, Eater wrote an article on Urbina’s restaurant, giving her the exposure necessary to be noticed by Food Network. Subsequently, the channel approached Urbina and asked her to participate in a special Latin American-themed episode of the show “Chopped.”

Though Urbina was nervous about competing, she eventually went in with the mindset that she would give it her all even if she lost in the end. Urbina went on to win Chopped three times and was also called back by the network to compete in other shows such as Fire Masters Canada. Her television appearances effectively cemented Urbina as an imminent culinary star.

After discussing her food competition experiences, Urbina reflected more broadly on the state of the restaurant industry and her own experiences in the wake of the COVID-19 pandemic. Though Urbina originally planned to travel to Korea, she soon found herself focusing instead on her work at home. She initially began creating meal boxes to go as a substitute for indoor dining. Afterward, Urbina rebuilt her company within social distancing confines by hosting online classes for customers.

Toward the end of the event, Urbina also spoke on the personal significance of the philanthropic and humanitarian work she participates in. From fighting for immigration reform and women’s rights to providing aid to Venezuelans by raising money alongside nonprofit organizations, Urbina continues to bring awareness to important issues affecting her home community and the world at large, even during a time where individuals remain more separated than ever before.

“For me, it’s more about putting away your ego in this case and saying, ‘I have to do what I have to do.’ If it’s online, it’s online, but I’m still going to be touching other people,” Urbina said. “I feel like, for me, it was very important to show positivity so that people felt like, ‘Let’s do it.’”