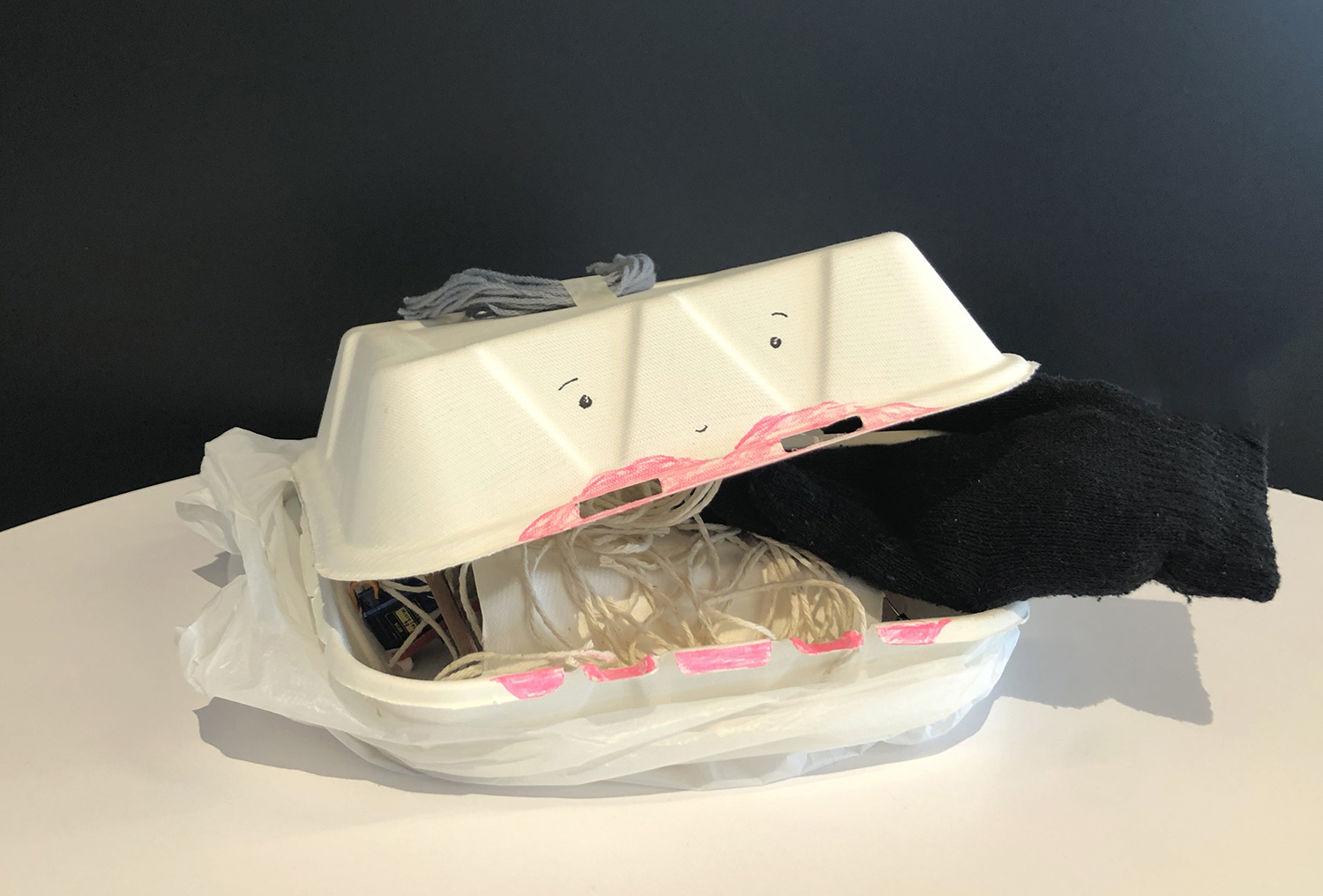 For the exhibition aspect of the Creative Embedded Systems course, students built sculptures like moving takeout boxes that had chopsticks pick up noodles and a model jellyfish that appeared to be swimming through water.

The seemingly opposite worlds of art and computer science collide as bright LEDs, microcontrollers, and other art structures culminate in a final creative project. In movements guided by creative expression, artists and scientists alike build moving kinetic sculptures in a bridge of technical and nontechnical languages. Through a mixture of lab and lecture, students explore how embedded systems can be reimagined into a new creative route in computation.

Mark Santolucito, assistant professor of computer science at Barnard, is teaching a new course called Creative Embedded Systems, which offers students the opportunity to build their creative visions. Students in Santolucito’s course work through six modules that include building a fully-functioning kinetic sculpture. Inspired by the Kinetic Rain installation by the Art+Com group—which uses technology as an artistic medium to create interactive moving pieces—and by the synchronized drone swarms seen at the Beijing Olympics, the course instructs students about how to operate system configurations to create original moving pieces.

Santolucito’s course, alongside Seth Cluett’s course titled Instrument, Interface, Installation: Building Sound, is sponsored by a grant from The Collaboratory at Columbia, jointly founded by the Columbia Data Science Institute and Columbia Entrepreneurship, that gives communities accessible tools and highlights visual and tactical media opportunities. Santolucito’s course aims to popularize a new type of lecture that focuses on cross-community engagement by using visual mediums to close the technology-accessibility gap that prevents communities from adopting new technologies.

The course requires students to document their work through posts on GitHub and a class course blog. The posts mirror the two types of communication that students develop in the course. By using GitHub, students create posts that give a technical view of the work they create while the class blog allows them to have a nontechnical space where they can share visual updates of their work.

“This class kind of gives students an opportunity to practice both of these skills in tandem and realize there are different ways of talking to different sorts of people,” Santolucito said. “That’s a huge part of life outside of the computer science major and undergraduate world. You’ve done some cool work. Now, you need to convince everybody else that it’s cool and they should be excited about it.”

The class recently wrapped up its kinetic sculptures project with a final installation where several students displayed their pieces at Barnard’s Vagelos Computational Science Center. Those not based in New York displayed their sculptures during a class-wide Zoom where the pieces were connected through an application programming interface that allowed them to connect to a common code where their movement could begin at the same time with the press of a button.

For the exhibition, students built sculptures like moving takeout boxes that had chopsticks pick up noodles and a model jellyfish that appeared to be swimming through water.

“It was such a cool experience to see all of these sculptures distributed all over the world, with students in China, in the U.K., Virginia, California, all over the place,” Santolucito said. “All of the sculptures were connected through space to this one button, and at the same time, they were all working.”

Santolucito points to the way students have grown as a result of the class. Many of them began the semester unfamiliar with the hardware used during the course, but now know how to work with the hardware and power needed for their devices. With the class communicating through Discord, students familiarize themselves with one another as well as the hardware needed for creative projects.

“As a computer scientist, you’re writing code, which is a creative act in and of itself, and there’s an artistic component that’s not always recognized,” Santolucito said. “This class is just getting computer science students to tap into that artistry that’s already there.”