Sitting inside the dark black box theater is a simple wooden structure—the bones of the house. Over the course of one weekend, this house will hold religious icons, a moonlit window, and the ghosts of women sacrificed in Greek mythology as three different stories come to life.

On Thursday, April 8, the Barnard theater department kicked off its annual senior thesis festival, streaming live from the Glicker-Milstein Theatre. The first weekend of the festival showcased student directors while this coming weekend will be devoted to a research presentation, solo performances, and playwriting theses. As the second in-person department show, the festival marks a dazzling debut for scenic designer Anna Pettit, CC ’21, who transformed a plain wooden frame into an austere Catholic reformatory; a cozy, wallpapered cabin; and the bleak underworld of Hades, stripped of every set piece but the rigging ropes.

Aside from streamlining set transitions, the wooden beams trick the audience: They promise to contain the action, such that when the characters eventually step out into the empty black foreground, it feels like they are breaking an unspoken rule. At key moments such as an execution or a violent religious frenzy, the actors breach the fourth wall and invade the audience’s imagined space.

Perry Parsons, BC ’21, opened Thursday evening’s performances with Monica Byrne’s play, “What Every Girl Should Know.” Set in 1914, the play takes place in a Catholic reformatory on the Lower East Side, where four teenage girls secretly discover the birth control advocacy of Margaret Sanger and promptly canonize her. The youngest of the group, Lucy, hangs Sanger’s portrait above the girls’ dresser to watch over them.

The saints begin to glow bright blue as the tone of the performance shifts from a slumber party to a seance. The stories that the girls would tell each other at bedtime—once outlandish, pulp crime dramas—suddenly morph into their own devastating backstories.

As they recount stories of trauma and abuse, the girls fall through the set’s wooden frame and enter into a kind of spiritual possession. They limp and writhe, keeling over with the kind of pent-up anguish one might expect from Pina Bausch’s “The Rite of Spring.” Lighting designer Jordan Gidaly, BC ’21, builds on the anxiety of this ritual: Flashes of color strike the dark stage like a psychedelic lightning storm.

“Theater can be a way to raise the dead and give them the last word, to exorcise demons from history, and imagine futures for those who never had them,” Parsons wrote. 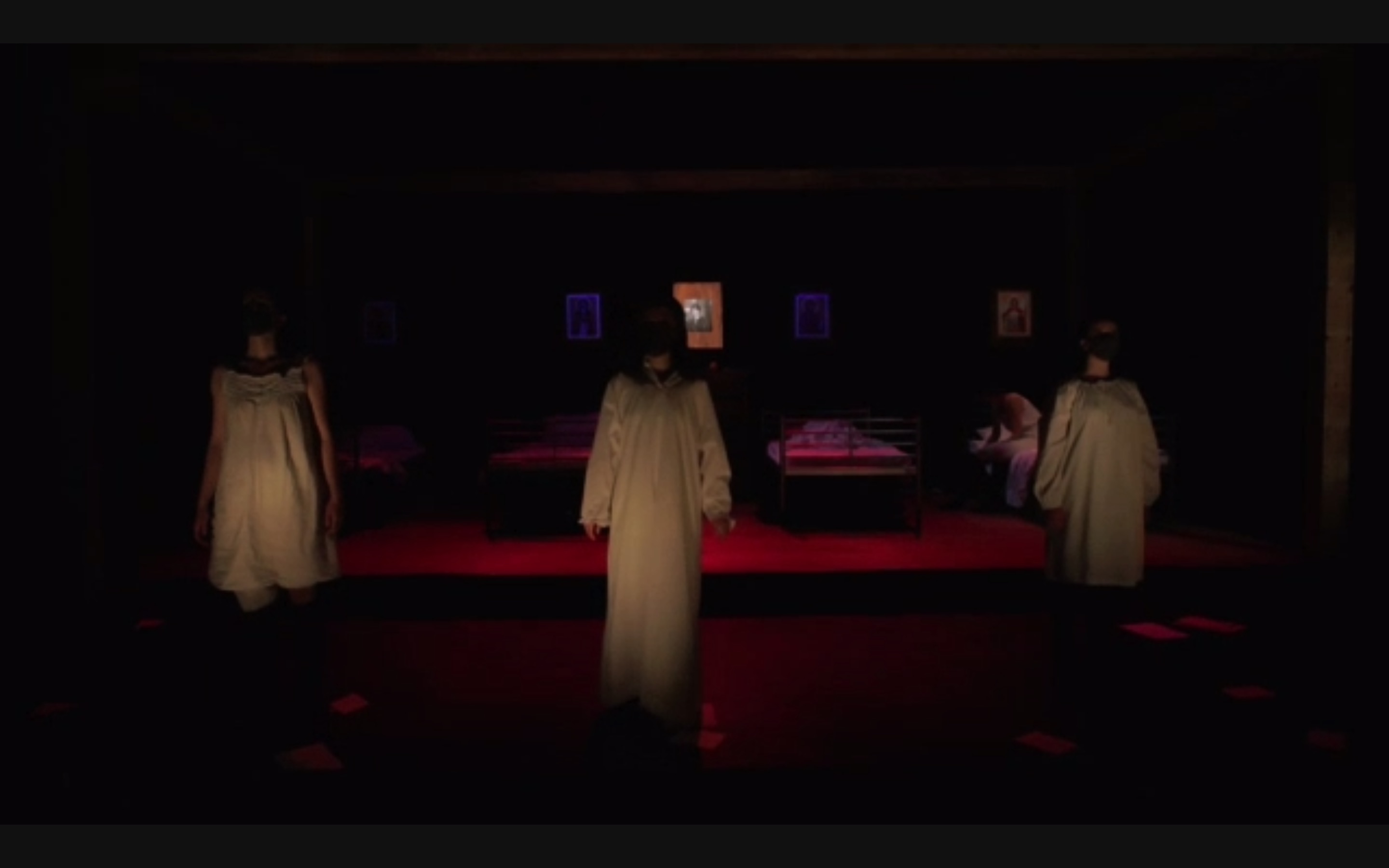 Emily Liberatore, BC ’21, followed with the very first staged production of Heidi Kraay’s new play “CloudMelt.” Blue light shines from outside the cabin window as an elderly, turtlenecked woman pushes open the front door, her arms full of groceries. Agnes, portrayed by Eleanor Babwin, BC ’24, proceeds to putter around the kitchen, unpacking bottle after bottle of Drano with the cheerful restlessness of someone waiting for their banana bread to bake.

“Oh, moon! There you are,” she says. “When I lost sight of you on the road, I wondered if I lost you—lost your approval.”

Today is the anniversary of both her wedding and her husband’s death. She has returned to the spot where they once honeymooned, ignoring her daughter’s calls and anxieties about her mother’s dementia diagnosis. There, Agnes plans to commit suicide to join her husband on the moon, where they had always imagined spending the afterlife together.

Wren, an intuitive 16-year-old runaway portrayed by Daniela Mays-Sanchez, BC ’24, seeks refuge from the storm in Agnes’ cabin and immediately apprehends the Drano-stacked counter. In an act of extreme empathy, she talks Agnes off the ledge by persuading her that she is, in fact, her reincarnated husband.

As Liberatore reminds viewers in her director’s statement, “CloudMelt” is “not actually a story of the occult,” but a kind of exposure therapy for a woman who refuses to listen to anyone but her late husband. The play is a slow-burning exploration of the loneliness and disorientation caused by dementia and the death of a loved one who was once synonymous with home.

Despite their half-century age difference, Wren and Agnes find refuge with one another. The play’s abstract title refers to the rainstorm of that night and to a kind of clarity. By morning, both the storm clouds and the mental cloudiness caused by Agnes’ dementia have cleared, and she realizes that her home is on earth with her daughter. 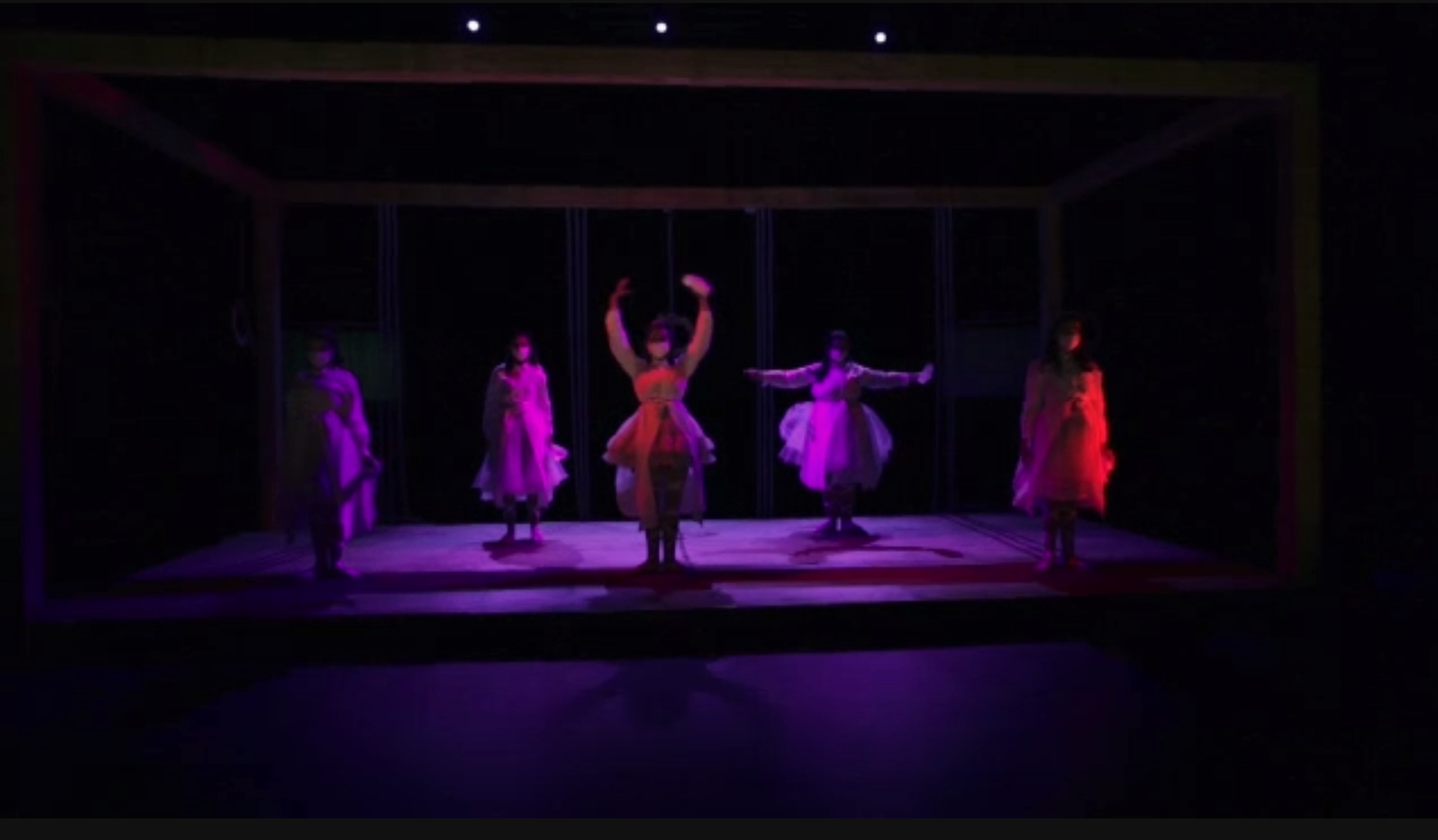 The third production was Margaret Atwood’s “The Penelopiad,” directed by Alexandra Haddad, BC ’21. At the play’s opening, viewers see the purple silhouettes of seven women dressed in tulle—looking more like a “Swan Lake” corps de ballet than Atwood’s handmaids—adorn the screen. But instead of Tchaikovsky, we hear the haunting music-box chime of FKA Twigs’ “Mary Magdalene.”

“What have I amounted to now that the official version has gained ground?” Penelope asks. “An edifying legend. A stick used to beat other women with. Why can’t they be as considerate, as trustworthy, as all-suffering as I was?”

The maids—each portraying Penelope—shed their tulle as the play goes on, revealing another costume of red tatters. They restage their abuses and humiliations at the hands of Penelope’s suitors, passing around a cutout of the letter “P” to hang loosely from their necks.

Practically speaking, the prop serves to identify which ensemble member is playing Penelope at that moment. But it also fits ironically into a tradition of scarlet letters, branding Penelope not for adultery but for her character-defining fidelity. The letter is startlingly playful and reminds the audience again and again that Penelope’s maids are children. 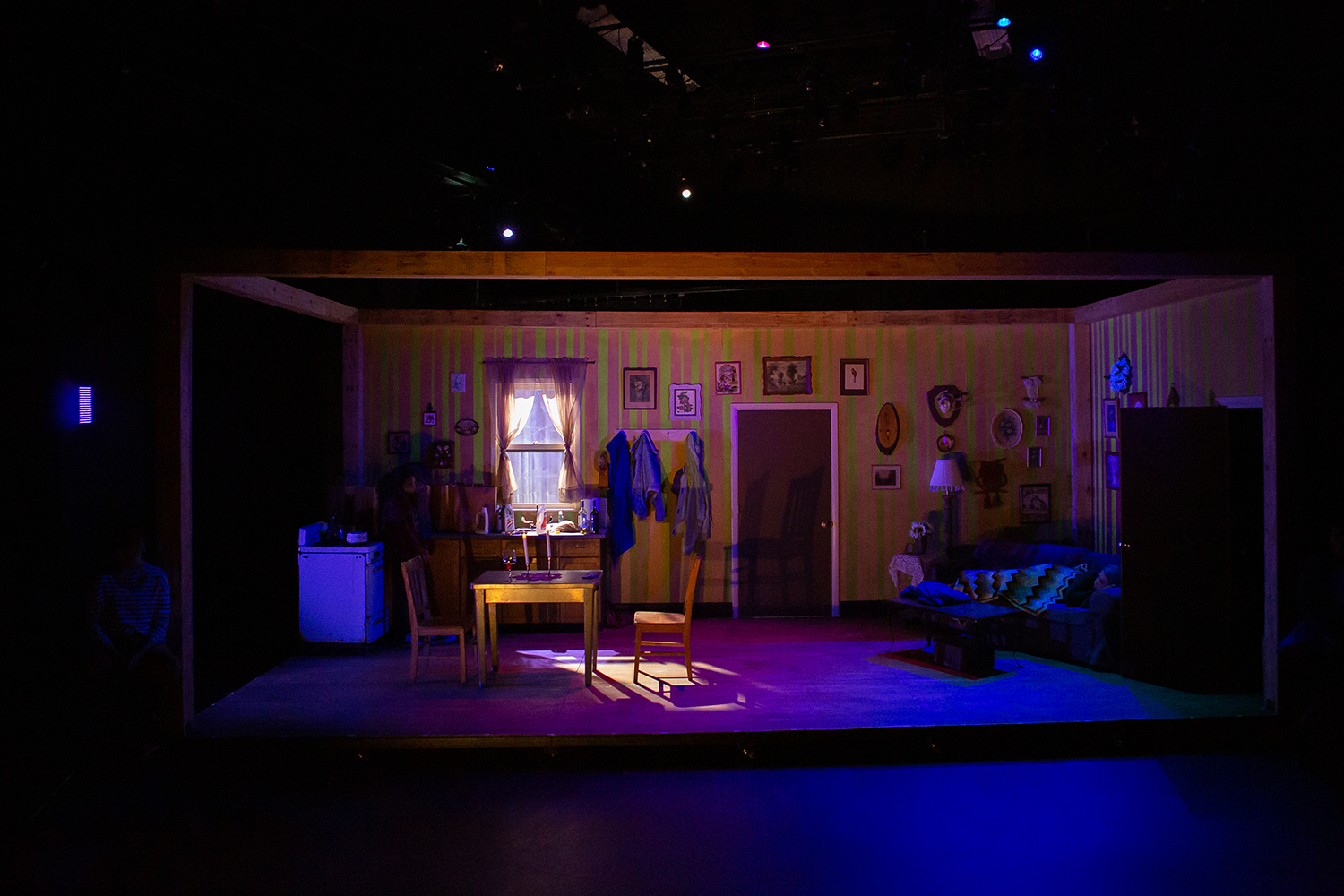 The brilliance of Pettit’s stage design becomes clear once the play concludes. The ropes hanging from the wooden frame first resemble a theatrical fly system, alluding to the off-stage deaths of the maids and likening the underworld itself to a kind of backstage. But then, as the maids stall the suitors by weaving and unweaving a tapestry, the ropes transform into the warp of a loom—or even a spider’s web. Finally, as the maids await Odysseus’ execution, kneeling at the edge of the stage platform, every rope is suddenly a noose.

In a staggering half-second, every cast member swings the letter “P” violently around her neck, transforming the wooden frame from a stage to a scaffold.

With otherworldly lighting and stage design and wild, haunting choreography, the first weekend of the Barnard senior thesis festival raised the dead—and finally let them tell their own stories.