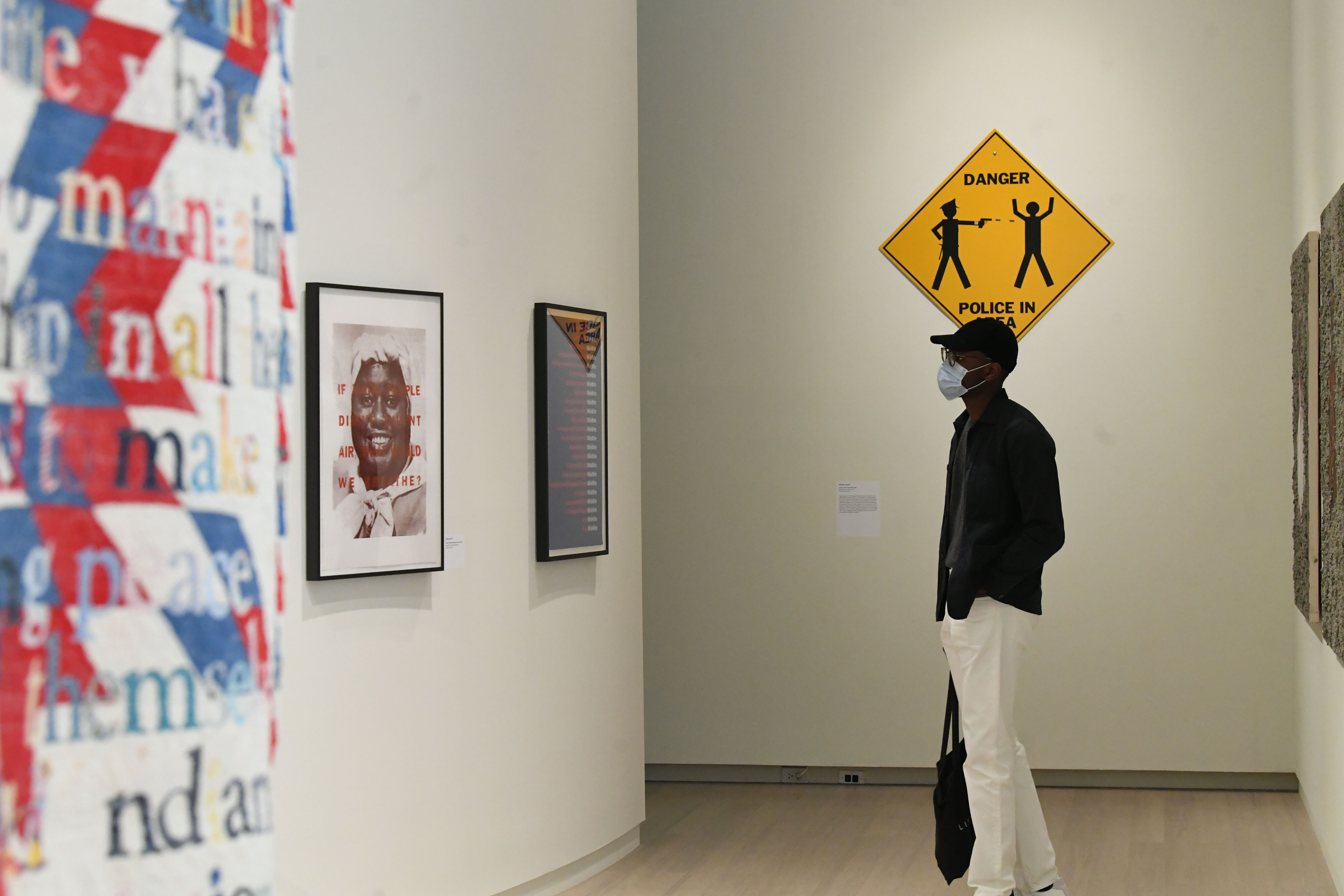 The punchy drumming from Leikeli47′s “Tic Boom” music video echoes in the gallery, as an  audience lingers in front of Lindsey Brittain Collins’s painting of a Black baby doll sitting against a background of concrete. At the other end of the gallery, colorful suspended quilts covered with patterns inspired by the designer’s Native American heritage, quietly recount a history of grief and betrayal.

Amid the Black Lives Matter movement, Jamison investigated how the ongoing protests and confrontations manifest in art. In “AABV: Aestheticizing Anti-Black Violence—From Critique to Satire,” Jamison surveyed artists of the Black diaspora and investigated their approaches to anti-Black violence.

While Jamison features works traditionally classified as fine art, such as prints and paintings, he also looks to new media works, which encompass representations of contemporary culture like music videos. In the show, Jamison includes three music videos, ranging from a direct portrayal of police to a Black individual engaging in a physical fight in Run the Jewels’ “Close Your Eyes (And Count to Fuck)” to a celebratory portrayal of a Black funeral in Flying Lotus’s “Never Catch Me.” Jamison considers music videos as a medium that includes both visual and auditory aspects that create a wholly contained narrative.

“In a way, I did want to talk about how certain barriers and lines that have been created around genres of different media need to be broken down. So we can think about media a little bit more expansively,” Jamison said.

The exhibit documents ways in which Black people have been mistreated, commenting on  recent anti-Black violence. Lindsey Brittain Collins’ painting series “Nannie’s Grave,” depicting Black baby dolls against a background of concrete, preserves the memory of a slave by painting the offerings left for her.

“There are many different ways we can approach the topic of anti-Black violence,” Jamison said. “A lot of them don’t portray overt anti-Black violence in the way you would think of, where it remarks upon that topic, but it is a lot more poetic in what it’s trying to show. We need to start having this conversation of anti-Black violence on a larger scale, and to do so we don’t always need to re-traumatize people. That’s one thing that both of the works, the two-dimensional paintings, the prints, and also the music videos do very well.”

On off-white fabric covered with geometric patterns from her Ojibwe and Lakota ancestry, Gina Adams presents words of broken promises from treaties between the United States government and Native American tribes. Using the colorful and vibrant threads, Adams unravels a story of betrayal that has haunted Indigenous communities for generations, and continues to manifest in challenges such as poverty and tribal land sovereignty.

Marie Watts retells the creation story shared across Northwest Coast Native communities in “A Cautionary Tale on Darkness (Raven Threatens to Take Back the Night),” using black and silver threads woven into the shapes of crows on top of an umber-colored quilt. By recounting a piece of oral tradition, Watts speaks to Indigenous cultural heritage while criticizing the misuse of treasured land by colonial powers.

In an investigation into the history of deceit and betrayal, these works build a bridge between the past and present. “I think there’s many stories, there’s personal stories, but there’s also political stories being told here,” Gallagher said. “I think these issues of land-use sovereignty, climate change, all of those things that these artists are thinking about are very present and pressing issues today. I hope that those are some of the threads that people will leave with and consider maybe taking action, or sparked some kind of change.”

As members of a new generation of curators, Jamison and Gallagher address contemporary issues in society and uplift marginalized voices. With distinct focuses, these two MODA Curates exhibits engage with historical means of aesthetic representations to investigate pressing societal issues.

“I think probably the best thing that art museums can do is to consistently acknowledge what is happening in contemporary media and contemporary culture at large, and to really form exhibitions that reflect today,” Jamison said.