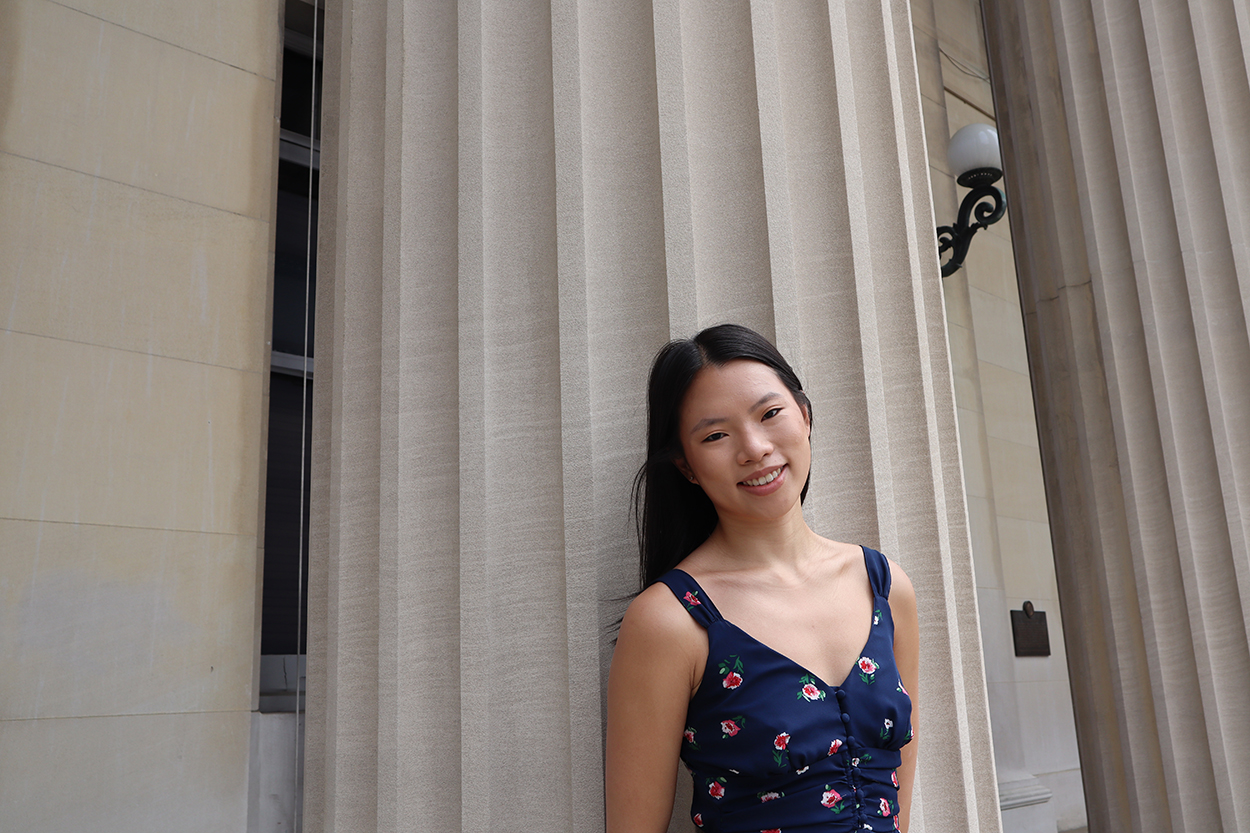 With Commencement comes the time to celebrate the seniors who have greatly contributed to the dance community on campus. Whether they are captains, presidents, artistic directors, or development directors, these seniors led their respective dance groups through the trials and tribulations presented by a virtual year. Spectator interviewed some of these seniors and heard them reflect on their experiences as members and leaders of the performing arts community. 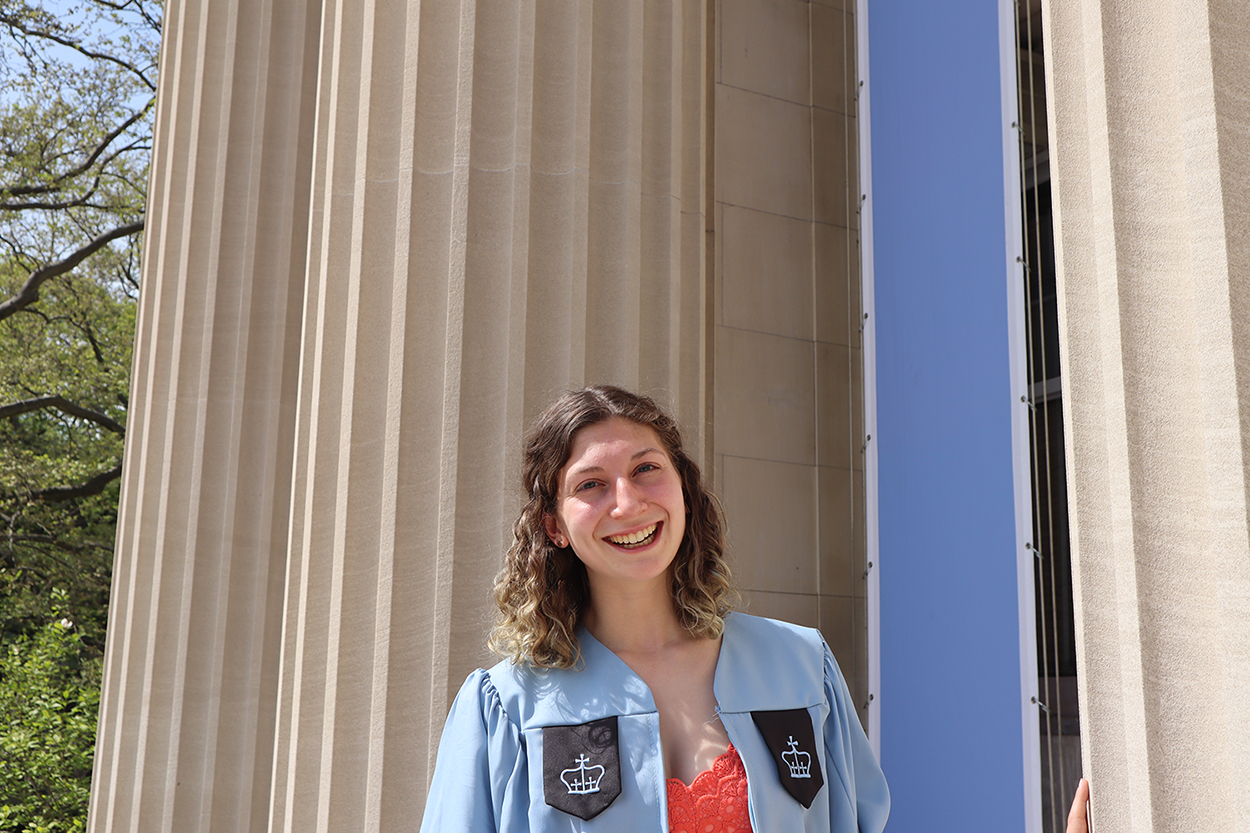 Sophie Visscher, BC ’21, had a unique journey through Columbia’s performing arts. Originally stumbling upon Orchesis at the fall club fair as a first-year, Visscher auditioned, joined, and then danced in numerous pieces. That spring, she joined the Orchesis Board as a costumer and later became the producer of two shows: “Bears. Beets. Battlestar GalactOrchesis” and “Life in ColOrchesis.”

As a first-year, Visscher served as assistant choreographer for the Varsity Show, which catapulted her into a new world of musical theater. Since then, she has been highly involved in Columbia theater, serving as the choreographer for the Varsity Show and the Columbia Musical Theatre Society’s production of “Pippin.” Visscher says these positions “launched [her] into an incredible community where [she] ended up meeting most of [her] best friends.”

Following graduation, Visscher plans to continue spreading her love for dance; she will be working for Dances For A Variable Population, a non-profit dance organization that aims to engage senior citizens in dance. 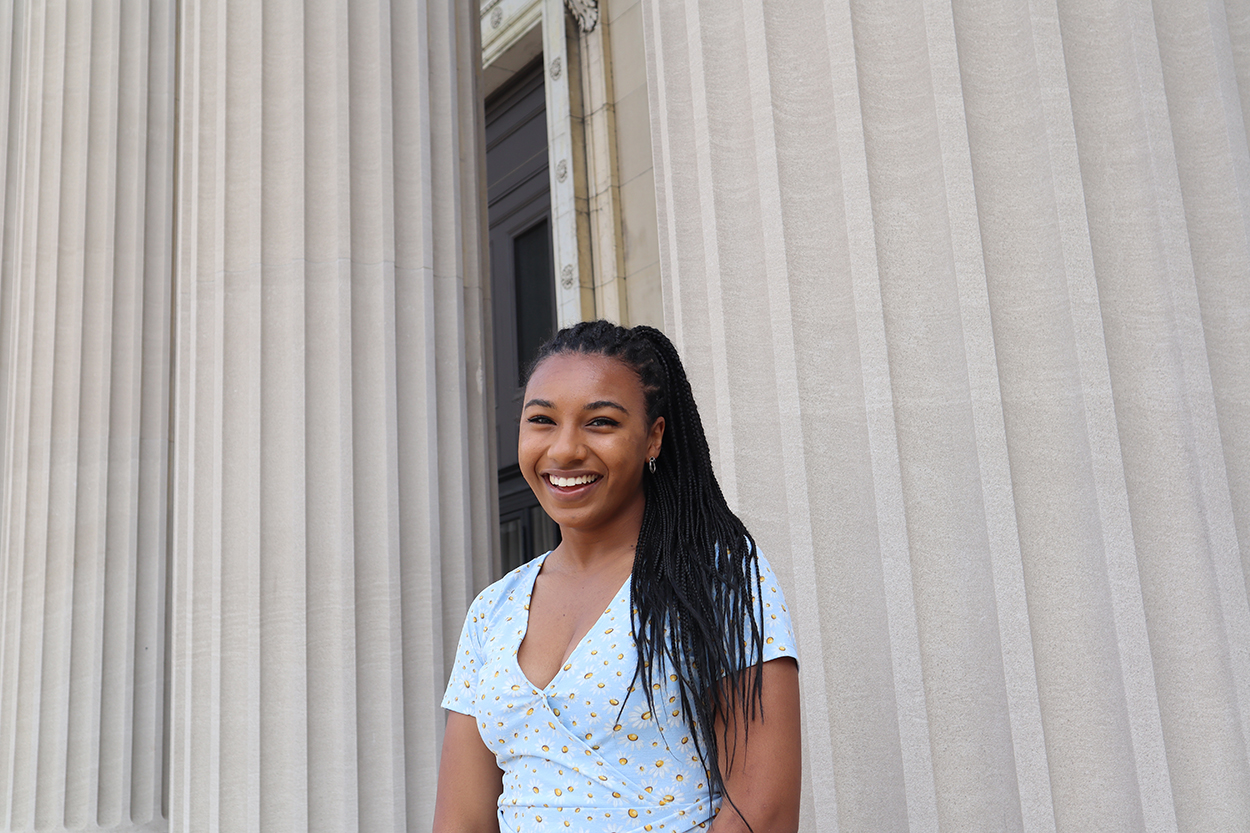 Anisah Nsugbe, CC ’21, joined Raw Elementz in the fall of her first year. In addition to being a double major in political science and psychology, Nsugbe has dedicated much of her time to Raw Elementz, becoming co-artistic director in her junior year and president her senior year.

“[I was] basically given a family from my first day of freshman year,” Nsugbe said. “And that was super special to me. And that they’ve stayed my family for the past four years. I’m really sad to be leaving.”

As co-artistic director for the 2019-20 school year, Nsugbe, alongside her best friend Zena Ezz Eidin, CC ’21, was in charge of what Raw Elementz produced including choreography, costumes, lighting, and performances. She then stepped into the role of president in her senior year and has worked to adapt a normal semester to the virtual realm. In addition to producing choreography videos, she has prioritized the team’s sense of community, ensuring new members feel welcomed into the already close-knit dance group when they cannot practice in-person.

Looking back on her last four years on the team, Nsugbe ranks Raw Elementz’s performance at Night Market in fall 2019, the first performance she and Eidin put together as co-artistic directors, as her favorite memory. As for the future, Nsugbe hopes to become a psychologist; she knows that she will carry forward the lessons she learned from being a dancer and a leader in Raw Elementz.

“Stay in your lane because that is where you shine the brightest,” Nsugbe said. “The scariest times are when you’re being completely yourself, and when you’re being authentic and vulnerable, and putting yourself in positions that you know, in your experience, that that’s where you belong. Those can be the scariest spaces, because it feels the most real and it’s the most important to you, but those are the spaces where you’ll find the greatest payoff.” 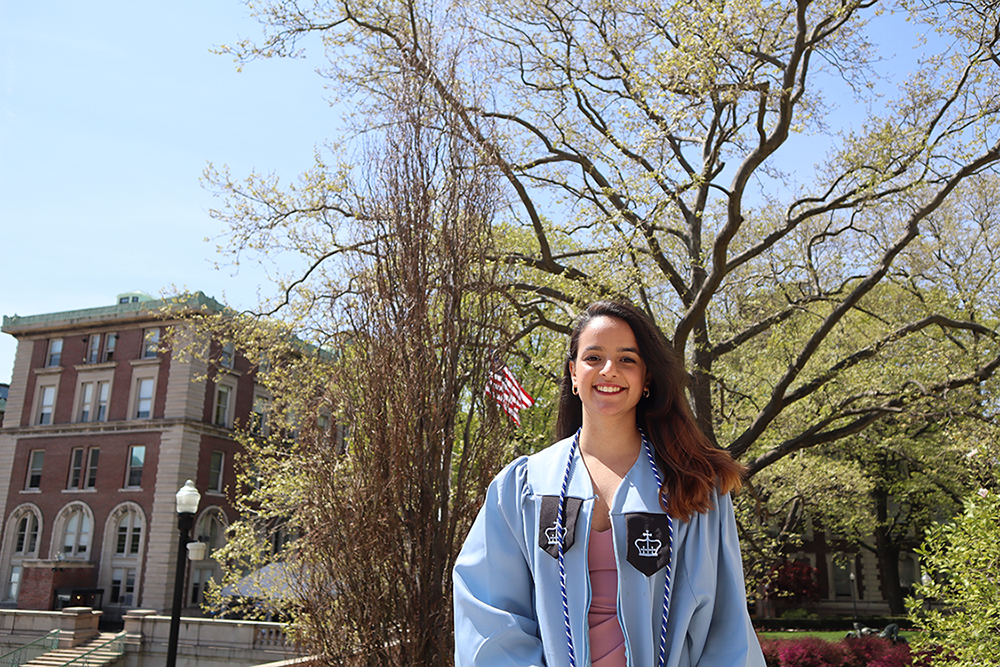 Gauri Talwar, BC ’21, an economics and mathematics major, has been an indispensable member of Columbia Bhangra since she joined her first-year fall. She became a leader of the team as the public relations chair in her sophomore year, rising to the position of captain for both her junior and senior year. As captain, she took charge of the team from both a dance and community perspective. When in person last school year, she choreographed for the team, ensuring the dances looked clean and put-together for performances. When Columbia went virtual, she led the effort to keep Bhangra active. These efforts paid off, as Bhangra was successful at its virtual competition and turned its annual “Bhangra in the Heights” virtual with the new title “Bhangra E-Heights.”

As a two-year leader, Talwar, inspired by the community she gained through her four years on Columbia Bhangra, left some apt advice for current undergraduates and future leaders.

“Don’t get too caught up in the technicalities of dance or running an organization,” Talwar said. “Community well-being comes first and your friendships that you make come first. That’s like the main lesson I’ve learned.” 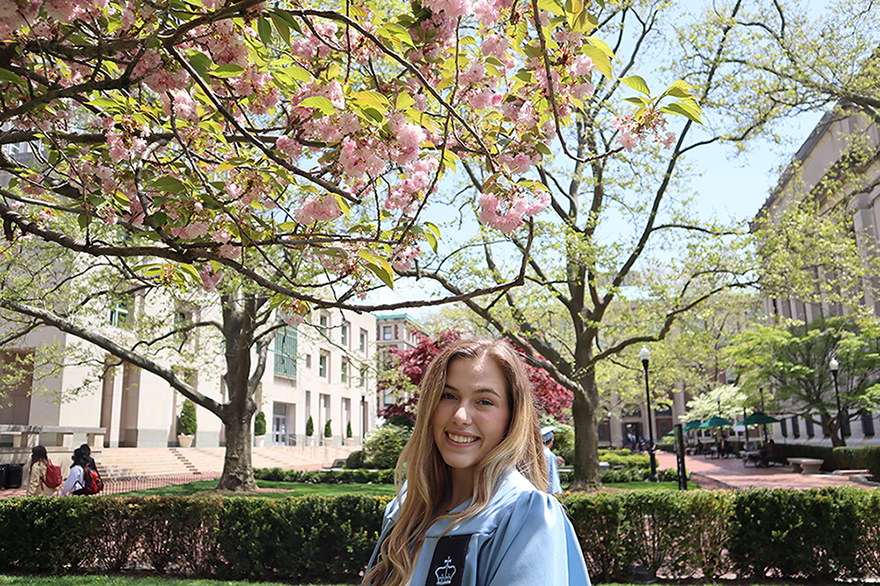 Julia Papas, BC ’21, joined the Columbia Dance Team upon her transfer to Barnard in her sophomore year and has remained an integral member for the past three years. She became captain in her junior year, maintaining the position this year as well.

“If I wanted a legacy to be left for me, it would just be that I was a good leader, and that people felt comfortable talking to me, or that they felt comfortable having me as a confidant, or they could tell me anything that was going on,” Papas said.

As captain, Papas served as the liaison between the coach and her teammates. Dancers on the team would often go to her first, whether they were having a hard time with commitments or feeling a sense of discomfort with something that had occurred, before reaching out to the coach. She would also meet with dancers outside of scheduled rehearsal time to review choreography and prepare for upcoming rehearsals or performances, as well as help organize travel to Baker Field during football season.

Just two days after graduation, Papas will put her neuropsychology major with a focus on neuroscience into practice as a research coordinator for clinical trials. But dance and the lessons she had learned from the dance team will continue to guide her.

“Dance is super self-disciplining,” Papas said. “Going into a working force, I think you have a lot of self discipline that I don’t see in a lot of other people in a lot of other things. I mean other sports, sure, but I think dance is really strong in that.”

Tian Griffin, BC ’21, has danced since the age of three and could not wait to become involved with the ballet community at Columbia following her acceptance. She joined Columbia University Ballet Ensemble her first year, performing her first role as a hot-chocolate dancer in the club’s production of “The Nutcracker,” rising through the ranks to become a répétiteur and eventually artistic director. As the artistic director, Griffin is in charge of assembling a full-length classical ballet each semester.

Outside of the CUBE, Griffin has danced with Columbia Repertory Ballet, Columbia Ballet Collaborative, and the Barnard Dance Department Miller Theater and New York Live Arts Productions. Yet, she explains how CUBE has had the greatest impact on her, as without this club, “I would have never have been able to perform, unless I was solely pursuing a professional career.”

She recalls the incredible joy she felt taking the stage for each CUBE performance, specifically recounting performing a trio with two of her closest friends in “Don Quixote.”

“It was just really fun to be on stage with them. It’s a really great energy,” Griffin said. 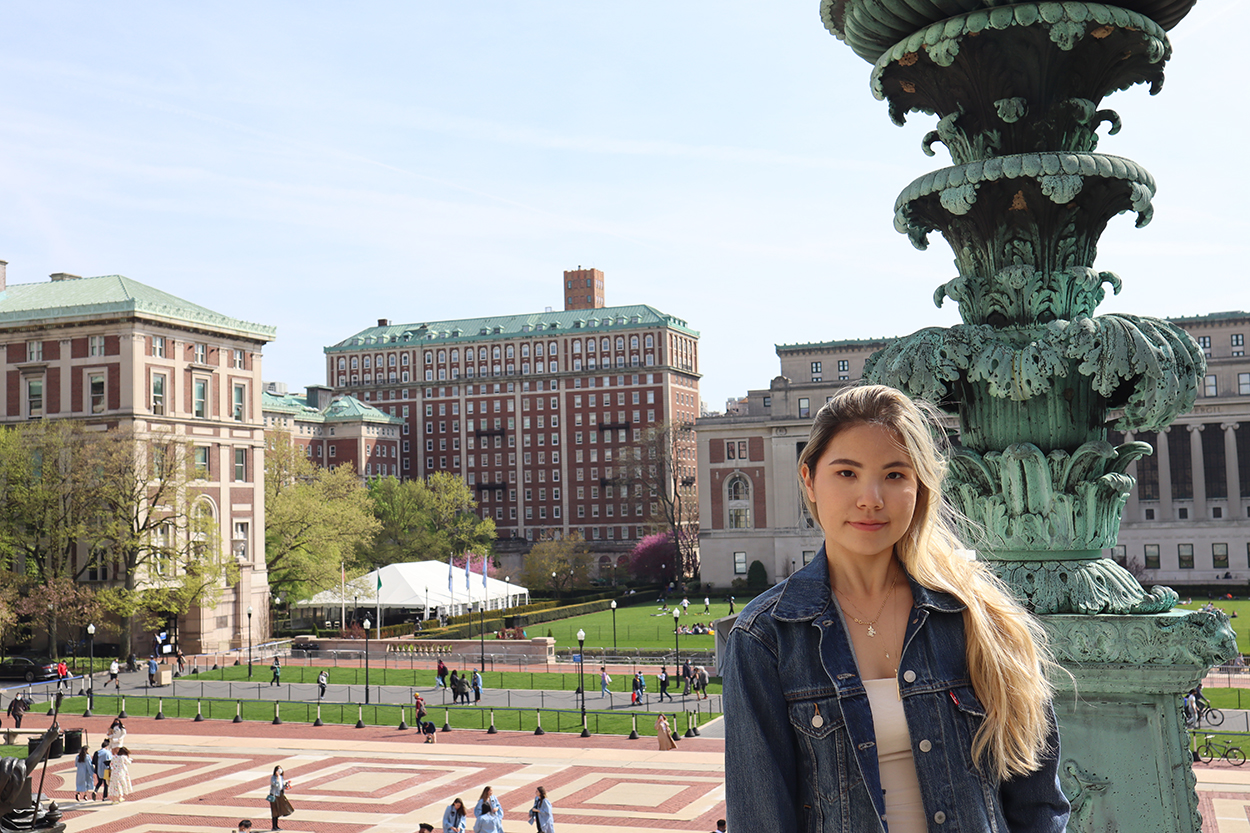 After her previous dance experience in high school, Karen Lin, CC ’21, joined CU Generation her first-year spring semester. From the beginning, she already felt as if the team had welcomed her into their family. Currently, Lin serves as the artistic director of CU Gen, choreographing sets, formatting practices, and producing the annual showcase.

Following an entirely virtual year as artistic director, Lin says she is most proud of her success in organizing an entirely virtual showcase titled “GENESIS,” which amassed a large viewership and popularity. Despite the circumstances, Lin remained optimistic, stating that a benefit of the showcase’s virtual premier is that “now we have a lot of videos and sets to cherish in video format.”

Although Lin finished her last CU Gen showcase appearance, she plans to continue her creative work as a product designer for MongoDB, a database program. She attributes much of her creativity to her involvement in CU Gen through navigating the various creative aspects of “freestyle, choreography, artistic direction, and set creation.” 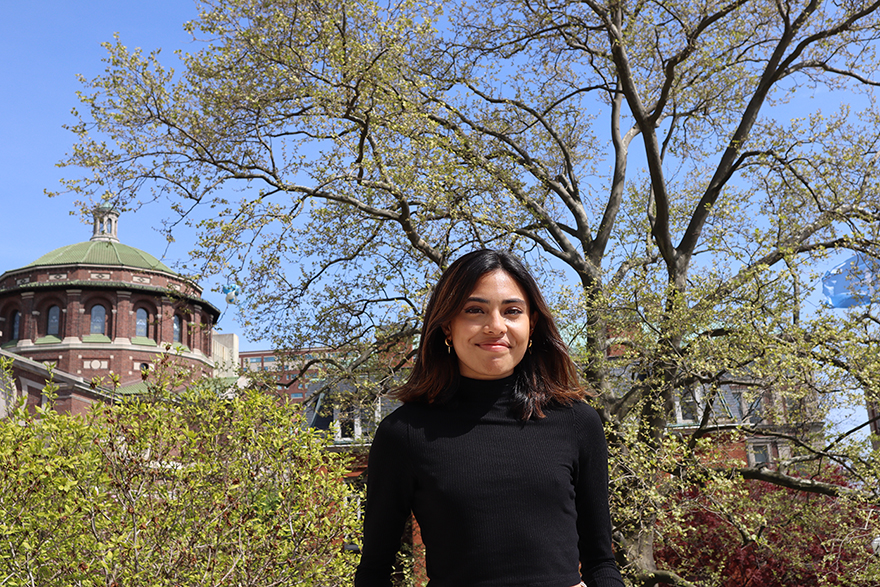 Asha Meagher, BC ’21, joined the Columbia Ballet Collaborative in her sophomore year, quickly becoming a board member as the assistant development director. Throughout her time in the club, Meagher progressed to become the development director, handling alumni relations, choreographer mentorship, and fundraising for the organization. In this role, one of her main contributions to CBC was her reformatting of the mentorship program.

In a typical year, mentors are assigned to one-on-one mentors with choreographic experience.

“This year, because of the virtual format, we kind of took the opportunity to expand, restructure, and make it a bit more inclusive” Meagher said, “It was more of a curriculum, as opposed to just a set of meetings.”

Meagher detailed that CBC transformed the role of dance in her life from something stress-inducing to something that served as an escape from stress as it allowed her to connect with the dance community and form meaningful friendships.

“Being able to have genuine friendships in a dance environment that is ultimately centered around college and academics has been a really great thing,” she said.

Without precedent to follow, this group of seniors allowed Columbia’s dance groups to continue performing this year despite its virtual format. “I’m just so in awe of my fellow dancers and what we were able to accomplish because genuinely I had never seen anything like it done before,” Griffin said.

Staff Writer Emma Danon can be contacted at emma.danon@columbiaspectator.com.