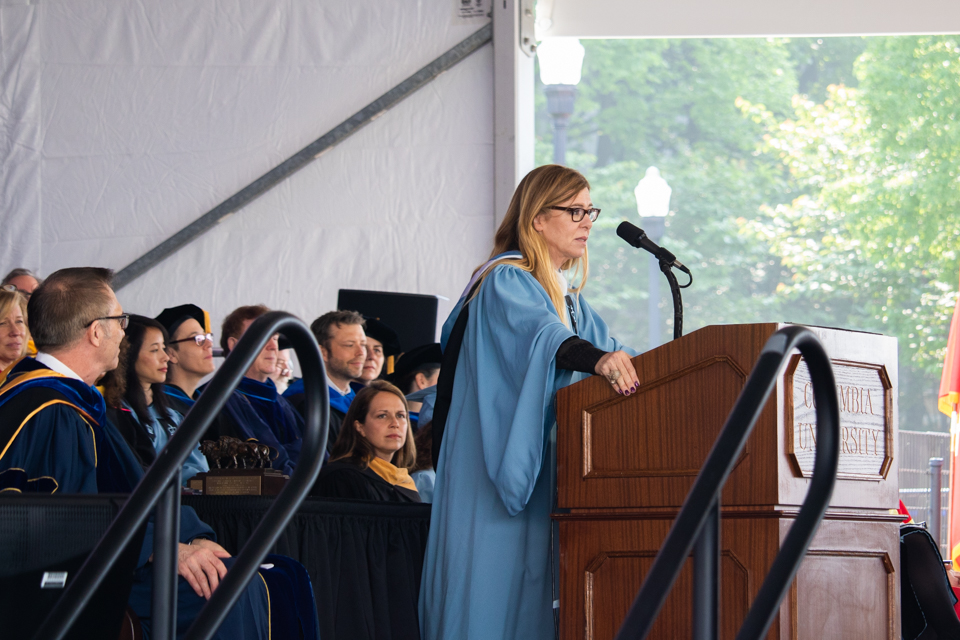 Gardner emphasised the importance of engaging with others’ stories with the goal of understanding.

Five-time academy award nominee and two-time winner Dede Gardner, CC ’90, encouraged the graduating seniors of the class of 2018 to recognize the universality of their fears at Columbia College’s class day on Tuesday morning.

Gardner emphasised the importance of engaging with others’ stories with the goal of understanding.

“Columbia is where I first reckoned with the truth, my own first and foremost, and that of those around me,” she said, “I learnt the value of rigorous thinking, it is where I began to listen.”

Several speakers were, however, critical of the University. Valedictorian Sam Goldberg said she felt Columbia had not supported her sufficiently throughout her time at the University, forcing her to seek support in small groups on campus.

Both Goldberg and Class President John Avendano used the platform to urge University President Bollinger and other administrators to act on prominent issues that the class advocated for during their time at the University.

“As I look out I am hopefully because I see four years worth of conviction,” Goldberg said. “I see the students who are fighting for campus-wide food security, access to 24/7 health services; I see student workers and their allies exercising their right to form a union.”

Avendano also encouraged graduate students to continue to fight until the administration agreed to bargain, to loud cheers from the graduating class.

While Bollinger did not comment on the strong support for the graduate students union, his speech centred on the freedom of speech and thought of individuals.

“You have been in an environment that takes two things as fundamentally true; one, that ideas really really matter,” Bollinger said. “Collectively they form the basis of each of us as individuals and as societies, and two that there is nothing inevitable about good ideas prevailing over bad ideas.”

Avedano showed appreciation to the University for serving as a vehicle for discourse and understanding.

“Those same brilliant minds who use their freedom of speech so eloquently to stand up to their adversaries would sit at the table with those same adversaries and engage in respectful and profoundly insightful discourse for the benefit of all,” he said.

Numerous awards were announced to recognise the achievements of students in the graduating class.

Notably, Nicole R. Allicock received both the Charles M. Rolker Jr. Prize and the Alumni Prize for her work as vice president of policy and co-chair of the mental health task force. She was praised for her persistence and collaboration in changing the curriculum and for enhancing resources available to first-generation students.