Saidiya Hartman, scholar of Black American history and literature, has been appointed to the highest rank of faculty
By Valeria Escobar
Saidiya Hartman, professor of English and comparative literature, has been appointed to University Professor. Only 17 other faculty members hold the distinction—Columbia’s highest academic honor—that allows them to set their own instruction schedules and teach across schools and departments.
...

Should all academic professors be cited as “experts” in their fields?
By Valeria Escobar
While academics often must push for their research to be publicized by news outlets, criticisms of mainstream media and the growth of informal social platforms have broadened the opportunities for academics to enter public discourse on current issues. University professors have accumulated upwards of 3 million followers on platforms such as Twitter—where their controversial ideas garner political attention and even become virally distributed.
...

Political pundits have dominated 2020 election coverage. Where do academic experts stand?
By Valeria Escobar
Media sources swarmed when a Columbia School of Social Work adjunct lecturer seemed to confirm on video that presidential candidate Joe Biden is a sexual predator. The video was retweeted by a Trump aide, and both left-wing and right-wing media sites began to claim the content for their disparate political goals.
...

Students have been ‘just as good as the police’ at enforcing the legacy of enslavement that would finance and expand Columbia’s prestige
By Valeria Escobar, Abby Melbourne, and Dia Gill
Updated July 29, 2020 at 9:44 p.m.

Racist Fiji messages are part of a long history of sexual, anti-Black violence protected by brotherhood
By Dia Gill and Valeria Escobar
Messages between members of the Columbia chapter of the Phi Gamma Delta fraternity, nicknamed Fiji, have circulated over the past week, implicating several students in racist comments targeting a Black woman photographed in The Denver Post after being tear-gassed by police. One fraternity member’s concerns were dismissed when he expressed disgust with a joke that compared the tear gas—a toxin linked to chronic respiratory diseases and miscarriages that has been used as a weapon against protests—to semen.
... 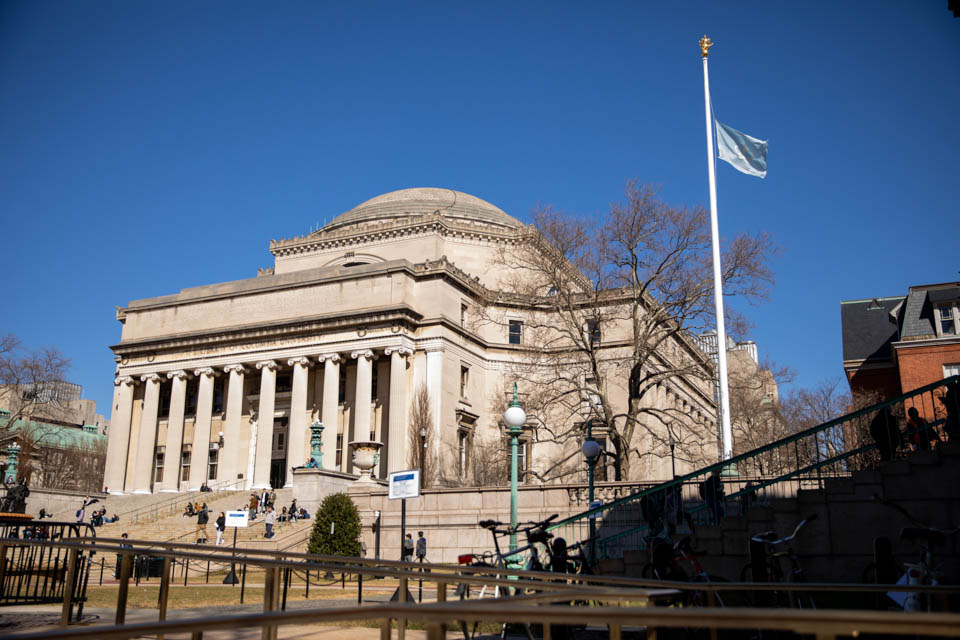 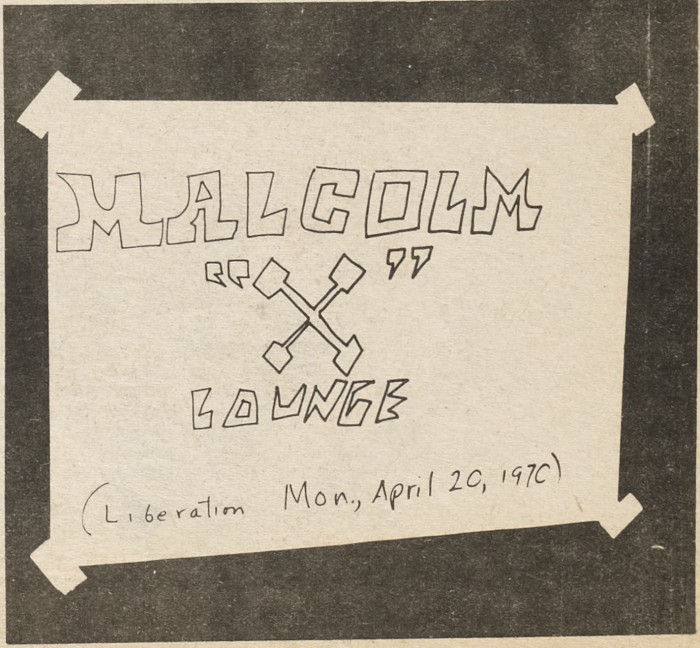 For 50 years, the Malcolm X Lounge has been the epicenter of the student activism against anti-Black violence
By Valeria Escobar
During a days-long occupation of what would eventually become the Malcolm X Lounge in April 1970, students from the Afro-American Society demanded that Columbia create an official space for Black students on campus. Their demands reflected the momentum from the 1968 protests, during which students occupied Hamilton Hall in protest of the University’s plans to build a segregated gym in Morningside Park.
...

These are all the city’s emergency

hospitals that existed in 2000.

Hospitals lose 13 cents for every

dollar they spend on low-income patients.

If an affluent patient is hospitalized,

than double what was spent.

These are all the city’s emergency

hospitals that existed in 2000.

for every dollar they spend

If a patient with private insurance

is hospitalized, their insurance

reimburses more than double what was spent.

When the bottom line is profit,

These are the hospitals that remain today.

This is New York City’s current

residents who earn between

When the bottom line is profit,

These are the hospitals

In the 1890s, Mt. Sinai Morningside and Columbia committed to keeping Morningside Heights white and wealthy. One local paper praised the steepness of Morningside Park for “[safeguarding] … whatever stands on the plateau behind it.” What happens when the neighborhood founded on the exclusion of Black people has the only hospital in West Harlem?

In the 19th century, the prospect of controlling the blueprint to transform Upper Manhattan—which previously avoided development with the exception of some working-class neighborhoods—would cause Democrats and Republicans to rally their supporters in a fight for the New York City that exists to this day.

Owned by the New York Hospital, the land that is now Columbia’s Morningside campus was home to the Bloomingdale Insane Asylum—a hospital that served a small number of affluent, mentally ill patients. Democrats claimed that the land should be repurposed to serve more people—attracting the support of poor residents, immigrants, and wealthy developers.

But the hospital eventually sold its property to an equally exclusive institution—Columbia University. Barnard, Teacher’s College, Cathedral of St. John’s the Divine, and Mount Sinai Morningside hospital would later join the surrounding neighborhood. To buy the land, these five institutions had to agree to the following: a 20-year ban of manufacturing plants, “dangerous or offensive trade,” and tenement housing. Without manufacturing jobs or affordable housing, it would have been impossible for Black people to live there.

“The precipitous bluff that has been converted into Morningside Park is a safeguard for whatever stands on the plateau behind it,” one paper wrote about measures taken by Morningside Heights to avoid the predominance of Black residents in Harlem.

Harlem would grow increasingly Black, but sale to the five institutions ensured that Morningside Heights would be an enclave of largely wealthy, white residents.

The ban has long expired. Harlem is still Black, working class, and has a separate identity from Morningside Heights—where residents make 250 percent more, are less vulnerable to the City’s worst air quality, and are less likely to be a Medicaid patient. But between Fifth Avenue and Riverside Drive and between 56th Street and 135th Street, Mount Sinai Morningside—a private hospital—provides the only source of critical medical care.

The pandemic proved that American hospitals were not equipped to care for the influx of COVID-19 patients that would rush to emergency rooms. New York City has now confirmed about 10 percent of COVID-19 cases and 8 percent of all deaths on a worldwide scale. It is estimated that every day, 1,000 new hospital beds are needed to accommodate the growing patient populations.

However, low-income Black New Yorkers have long anticipated the shortage of hospitals. Since 2000, 24 hospitals have closed, most of them in Black neighborhoods that serve high rates of uninsured or Medicaid patients, according to experts. Many have become luxury apartments.

While pandemics that cause mass shortages are unexpected, shortages of resources within Black communities are written into the American healthcare system.

Hospital emergency rooms cannot “patient dump,” meaning anybody can receive urgent care regardless of their ability to pay. If an uninsured patient receives treatment, the hospital picks up the entire bill. For Medicaid patients, the hospital only has to pay about 13 cents to the dollar, while the government pays the rest. In both of these instances, the hospital runs a deficit.

On the flip side, for every dollar that hospitals spend on privately insured patients, they receive more than two dollars back—generating most of hospitals’ revenue.

According to Darrell Gaskin, director of the Johns Hopkins Center for Health Disparities Solutions, our current medical system is “penalizing hospitals for high admissions rates.”

“The problem that those hospitals face is that they have limited resources because a high percentage of their patients are covered by Medicare. They don’t have the resources that other hospitals would have. More private pay patients and less uninsured and Medicaid,” Gaskin said.

Not only do poor patients present a cost that is not financially viable for hospitals, they also on average require more care than privately insured patients. Black residents are segregated to more polluted and toxic areas, have harsher and inflexible workplace demands, and Medicaid does not cover regular check-ups in New York—meaning that these communities are on average sicker, will likely stay sick.

A person who lives in Harlem—which is home to many of Manhattan's sewage plants and bus depots—is three times as likely to have asthma-related emergencies compared to other parts of the city. These circumstances have been reflected in the high rates of Black deaths from COVID-19, even though Black people are less likely to be tested in the first place.

“Poor people have fewer resources to mitigate problems that come up in life. What we’ve done as a country is that we’ve made healthcare a commodity. People who are less able to gain access to that commodity suffer,” said Tulane University professor Thomas LaVeist.

Under state social distancing regulations, low-wage workers—including grocery and drugstore clerks, delivery drivers and in-home care providers—have placed themselves at great risks of contracting COVID-19 at the frontlines of the pandemic. Dr. Jennifer Haas, Harvard Medical School and Harvard School of Public Health professor, noted that these populations are overwhelmingly composed of low-income Black people. Even with mass layoffs, the gig economy means that there is no shortage of opportunities for workers to take on low-wage jobs with high risks of infection.

“There is a disportionate share for folks that are in wage jobs, including the gig economy, but those folks are in jobs where they don’t have benefits, paid time off, they may not have any insurance or generous insurance,” Haas said.

Because low-wages are rarely sufficient for workers to live in the same affluent neighborhoods where they work, some essential workers must also commute to work across public transportation—the same service city officials have warned against utilizing to combat the spread of COVID-19.

Public transportation is often also the only option for low-income residents seeking medical care. Residents within walking distance of Mt. Sinai Morningside in Morningside Heights—the 2010 census tract that spans 114th to 122nd streets and Broadway to Riverside Drive—make nearly six times the amount of those in Hamilton Heights.

For residents of Morningside Heights, Mount Sinai Hospital and its urgent care is a short walk away. But for low-income Black residents in Harlem seeking critical care, distance, public transportation, and time away from work stand in the way of potentially life-saving procedures.

In Manhattan and the Bronx,

the majority of emergency hospitals in low-income neighborhoods are 100 to 1,000 meters from the

Bus stops and stops across New York City edge the majority of hospitals, increasing the overall accessibility to hospitals in all neighborhoods.

In Manhattan and the Bronx,

the majority of emergency hospitals in low-income neighborhoods are 100 to 1,000 meters from the nearest subway stop.

Bus stops and stops across New York City edge the majority of hospitals, increasing the overall accessibility to hospitals in all neighborhoods.

Before the economic collapse, LaVeist said that the distance from the hospital paired with the longer delay in public transportation could detract a resident from seeking urgent medical care. In a time when growing financial insecurity necessitates that low-income residents place themselves at risk of contracting the coronavirus, the segregation that has made communities vulnerable has also made healthcare financially inaccessible to those who need it most.

“In an instance when a safety net hospital goes out of business, the health needs of the community don’t disappear,” LaVeist said.

Valeria Escobar is a News editor at Spectator. She can be contacted at valeria.escobar@columbiaspectator.com. Follow Spectator on Twitter at @ColumbiaSpec.

Raeedah Wahid is the Graphics editor at Spectator. She can be contacted at raeedah.wahid@columbiaspectator.com. Follow her on Twitter @raeedahwahid.

Mike Fu is a Graphics reporter at Spectator. He can be contacted at mike.fu@columbiaspectator.com.

Hong Sen Du is a developer at Spectator. He can be contacted at hongsen.du@columbiaspectator.com.

Paid leave can stop the pandemic. Columbia’s policy lets it contract workers who are not guaranteed any.
By Valeria Escobar
Columbia has temporarily provided 10 paid workdays, on top of the city-wide 40 hours of sick paid leave, for emergencies that may arise due to the COVID-19 outbreak.
...

This semester, the 16th floor of East Campus has seen three incidents of anti-Semitic vandalism
By Valeria Escobar
This semester, there have been three reports of swastikas being painted on the 16th floor of East Campus. This is the same floor on which Chinese students’ name tags were burned in the wake of the COVID-19 outbreak.
...
Next
ADVERTISEMENT