The day that Gene Schafer happened to pass by his old business on 646 W. 131st St., a small bulldozer was clearing debris on what used to be the black rubber floors of his fitness center, ARC Athletics.

Schafer, better known as “Mean Gene,” made his mark as a personal trainer on 131st Street. After starting out as an athletics trainer at Columbia, he founded his own fitness center in June 2005 and quickly settled into the community. Every week,from Monday to Saturday, Schafer worked from 6:30 a.m. to 8:00 p.m. On his busiest days, Schafer would train 22 clients. He trained everyone from Columbia security guards to Columbia executives while growing a customer base that reached all corners of the New York metropolitan area, from Riverdale in the Bronx to Long Island.

Six years later, however, his landlord sold the property to Columbia. Soon afterward, Schafer received a letter from the University saying that ARC Athletics would have to move. 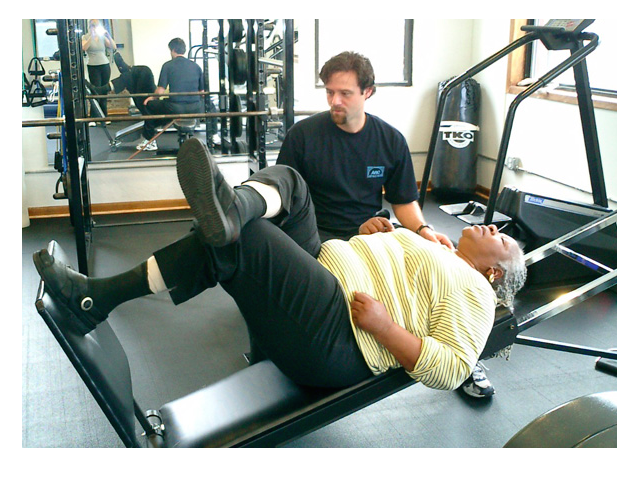 As many as 80 businesses have been dispersed as a result of Columbia’s expansion project in Manhattanville, first announced in 2003. By 2006, Columbia had already bought 65 percent of the properties in the Manhattanville area. In 2008, the Empire State Development Corporation used eminent domain to help Columbia seize more property. In 2011, the University began to demolish the stores and buildings from 129th Street to 131st Street between Riverside Drive and Broadway.

As the new Manhattanville campus evolves from hype to reality, it becomes difficult to remember the businesses that once thrived in the industrial lot. Not much is left of the street as it existed before the new campus; it was once comprised of auto repair shops, warehouses, parcels, an artist collective, a corner diner, a fitness center, and more. Although not as glamorous as Renzo Piano’s glass-walled 25-story cityscape, many of the businesses that used to be on Manhattanville’s expansion site were family-owned establishments and had been a part of the community for decades.

Rumors of expansion and displacement impacted community members differently. For Schafer, it was a slow tornado of suspicion that accrued until he finally got the letter from the University. His was one of the last businesses to leave the block, so Schafer had known for a long time that it was coming. Signs that read “NO COLUMBIA NO EMINENT DOMAIN” were posted on store windows on his route to work. He saw Hudson Moving & Storage relocate, although the owner, Anne Whitman, publicly resisted the move, telling the New York Times that she would be the man who stood in front of the tank at Tiananmen Square. She, too, eventually accepted a settlement and moved away, along with the other businesses.

Schafer was fortunate enough to be temporarily relocated to a location that Columbia recommended, a block north at 3295 Broadway. However, the University was only able to help Schafer stay there for six months. When the deadline passed and Schafer still couldn’t find an affordable space in West Harlem, he moved downtown to TriBeca, where his gym remains today.

Reflecting on his chapter in West Harlem, Schafer doesn’t recall the community uproar or animosity that other neighboring businesses do. Instead, he remembers his children learning how to walk at his gym and napping in the backroom. His business was two blocks from his home and a five-minute walk from his kids’ preschool.

When asked to comment on his relationship with Columbia during his last months in Manhattanville, Schafer said, “Columbia was fair to me.”

Not every business was able to move on with as little animus as Schafer. In 2010, when Ramon Diaz, the owner of a Cuban restaurant and tapas bar named La Floridita, heard from Columbia that he’d have to immediately leave Broadway, the news was a slap in the face.

La Floridita was founded by Diaz’s uncle Benito Ruiz-Diaz in 1965. Diaz became the owner in 2006, a few years after the restaurant’s landlord sold the property to Columbia. The original location was nestled in the corner of 125th Street and Broadway, selling around 800 cups of coffee and 500 sandwiches a day. Diaz explains that it was seen as the affordable diner in the neighborhood.

When I meet Diaz, he looks different than he does in the 2008 front-page photo of Columbia Spectator that I was imagining. Grey strands run through what was once a full head of black hair. Diaz is wearing a pair of small round frames and a five o’clock shadow on his face.

At first, Diaz was given the impression that his small local diner, popular with the community, was exactly the kind of business that Columbia wanted on the first floor of its new buildings. Early renderings of the Manhattanville campus even include sketches of La Floridita in big, bright, letters. Diaz remained hopeful about the status of his business—until, as Diaz recalls, University officials told him that there might not be any space for him and that there was uncertainty over whether he’d be relocated. As Diaz sounds the last vowel as he explains this, his jaw tightens and he loses his train of thought. After being told he had to close, he called a local priest to ask if he could donate unsold food. 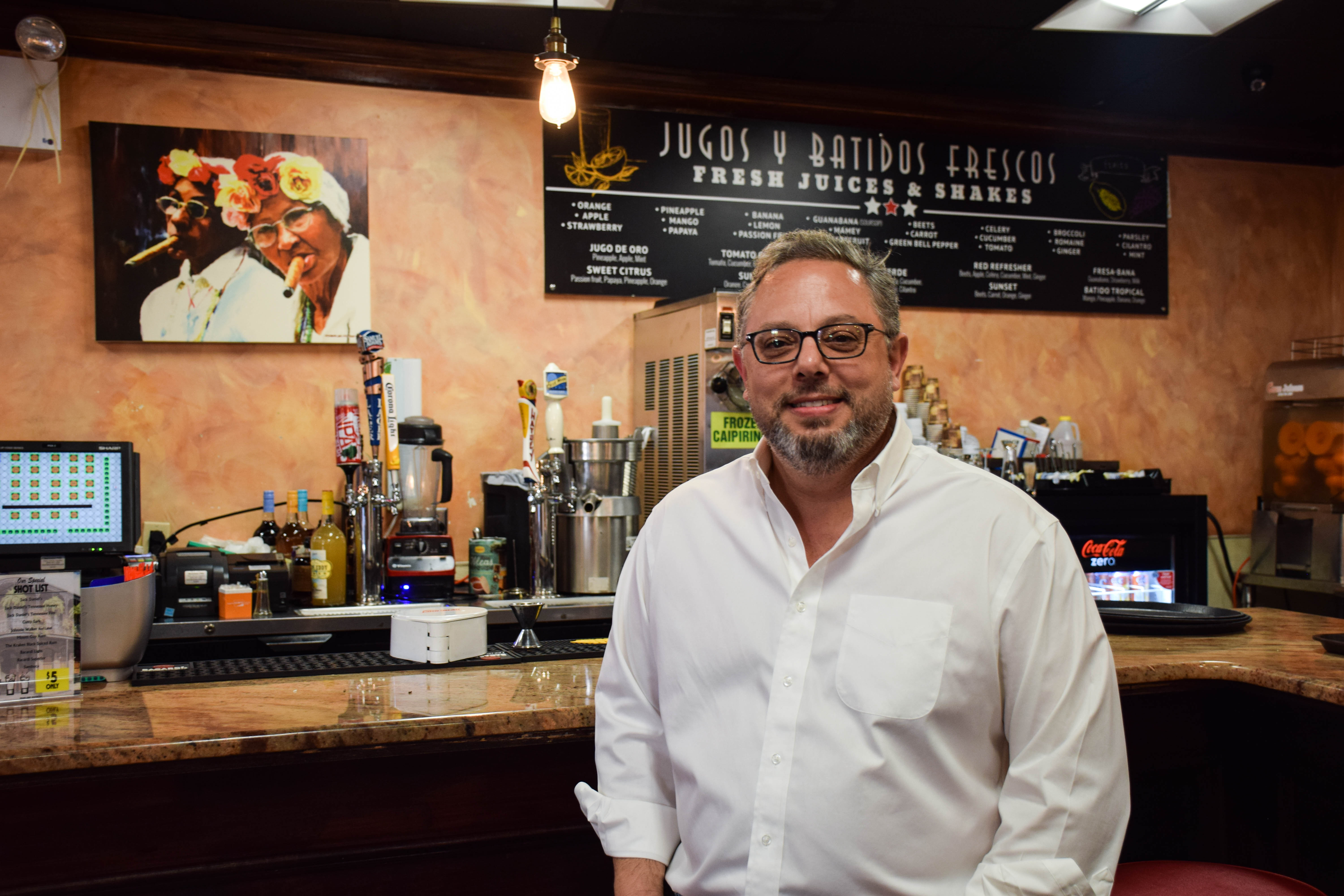 Diaz describes that chapter in his life as “rock bottom.” “It was the most stressful, most interruptive time of my life,” he explains. He never imagined in his wildest dreams that he would go to court with big real estate developers and stay up late into the night reading motions and eminent domain cases.

His restaurant’s new location is not easy to find. It’s on 12th Avenue now, away from the 125th Street subway station and behind the Jerome L. Greene Science Center. The heavy construction in front of his restaurant makes it hard for business. The disadvantages of the new location have also forced cutbacks. Harlem’s Floridita, as Diaz renamed it, sacrificed its tapas bar. Due to high rent, the restaurant also has had to spike prices and give up its cheap diner feel. 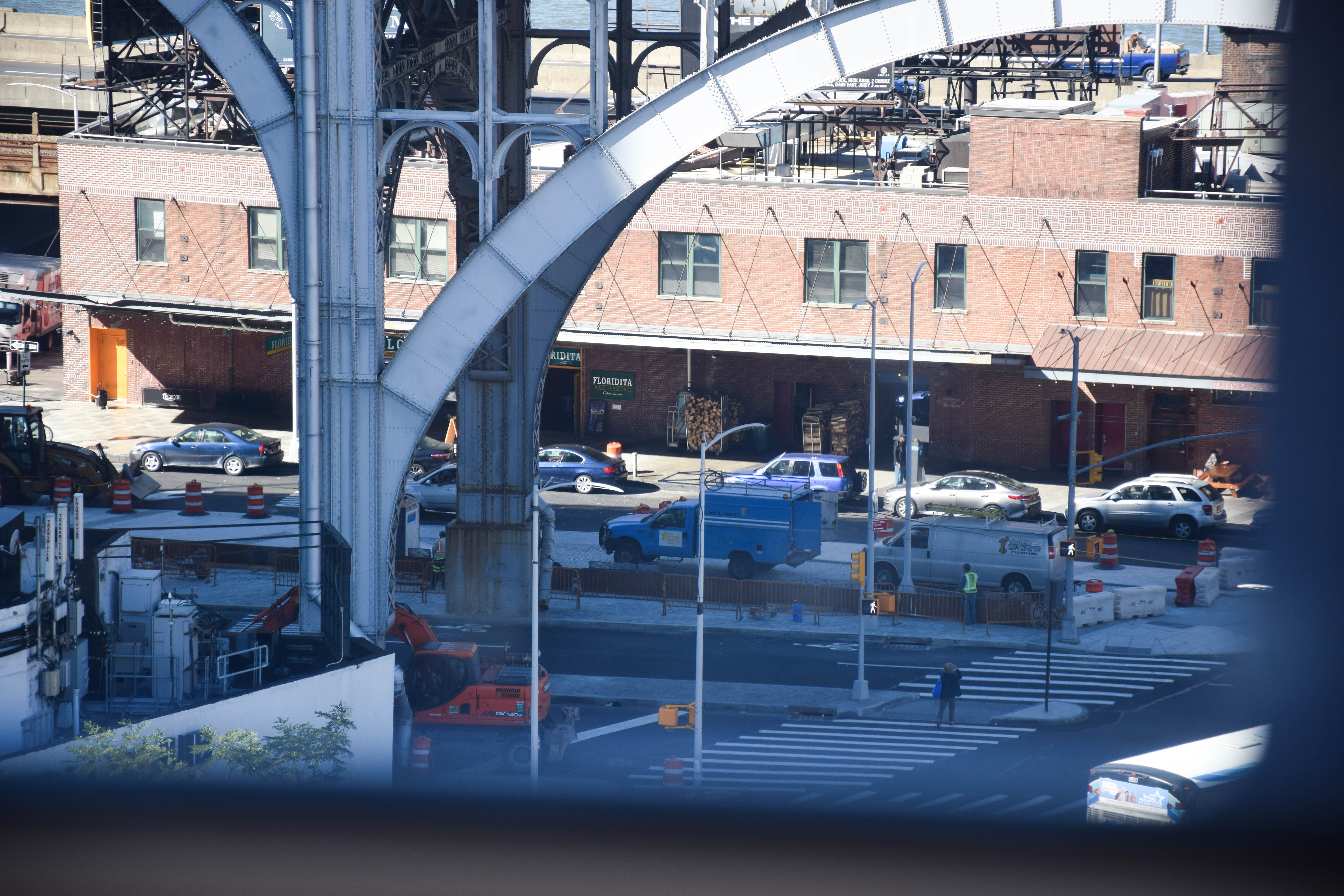 Athena Chin
View of Harlem's Floridita from the Manhattanville campus.

But despite these adjustments, Diaz says, “I’m here.” Unlike other businesses that are now dispersed across the city, his remains in the neighborhood.

Despite driving past the new Manhattanville campus every day on his way to work, Diaz says he’s no longer angry. What has given him closure is separating Columbia’s real estate department from its students and faculty. Today, Harlem’s Floridita still does some catering for Columbia events. When Diaz recalls his fondest memories, he includes running into former Columbia students in other states, like Connecticut or Florida. For the first time in the interview, a true smile appears on his face. Not one that emerges from sarcasm or bitterness, but from genuine joy in seeing others be able to name their favorite sandwich or soup from his restaurant. I ask him if it’s bittersweet. “Yeah,” he starts to say, before stopping himself. “Well, no. It’s sweet.”

Over the years, as stores have closed or relocated, the drama that once inflamed the community has dwindled down.

Trying to find traces of what was once here, I stumbled upon the only gas station still left in the neighborhood. Sandwiched between the vacant Hudson Storage & Moving building and the vacant Tuck-it-Away building is a small Shell gas station.

Across the street from the Manhattanville campus, George Ramos, the manager of the gas station, shuffles from the car service center to the convenience store. He has the kind of friendly personality you want to see in the mornings. Completing one task after the other, Ramos is constantly stopped by familiar customers. He explains, “That front counter is like the psychologist’s office.” Even during our interview at the back of the gas station, people drop in to say hi or to ask him questions.

Ramos became the manager of the gas station in 2011, right when the controversy surrounding Columbia’s expansion started to simmer down. When he started his new job, Ramos knew nothing about the hostility between the University and the Manhattanville neighborhood. 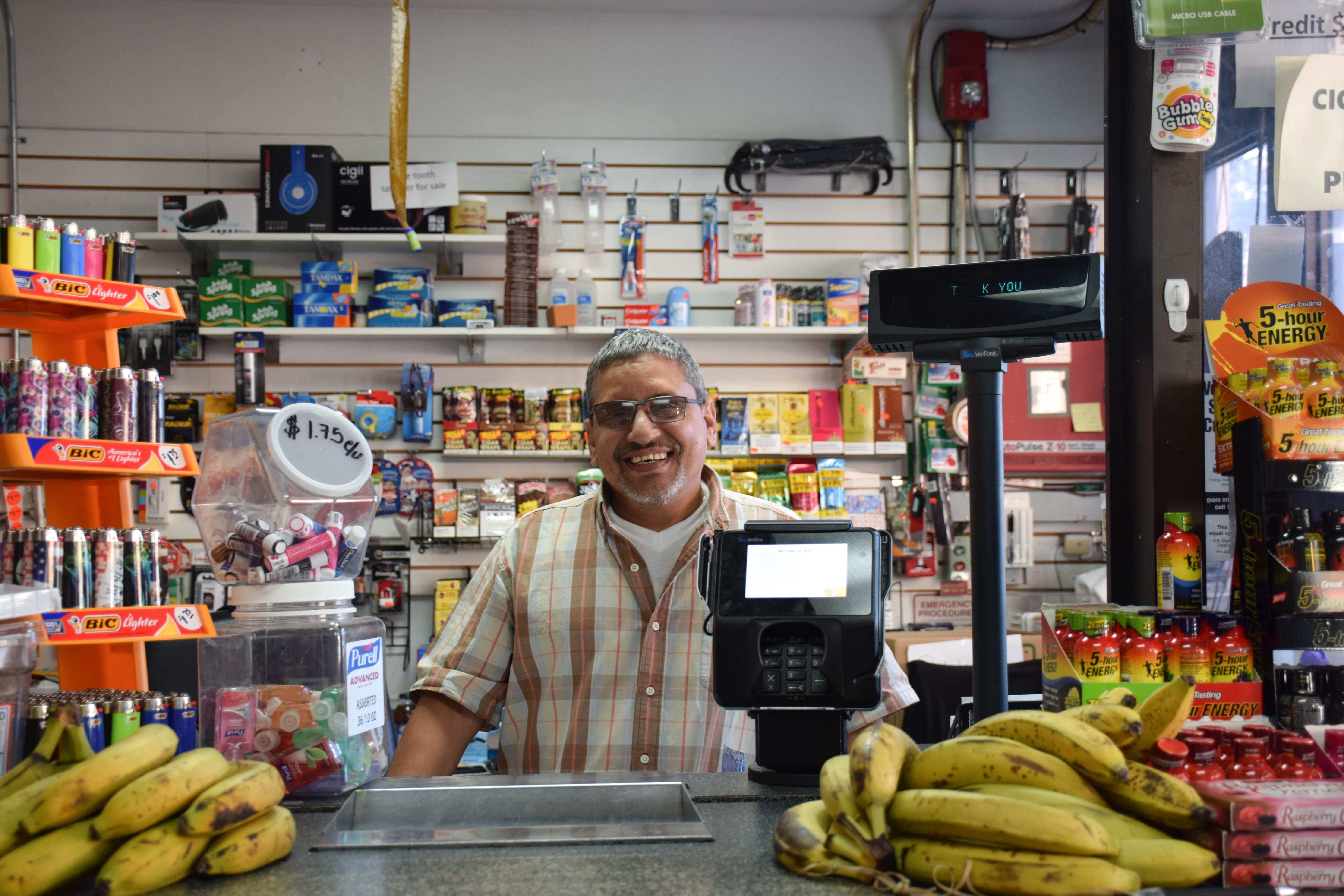 But it’s hard to avoid the topic when the construction for the campus is right outside his store’s front windows. Friends who work at other businesses in the area all express fear of displacement. Even when Columbia students or faculty come by and strike up conversation, they tell him that he should be worried about the University. Ramos says that his family members, who also work at the gas station, are the most terrified about the situation.

Ramos’ landlord isn’t Columbia. But like the other businesses that have not left, he knows that Columbia has a lot of influence in the neighborhood. “Maybe I’ll be here, maybe Columbia let[s] us stay here, maybe [it] won’t.” Ramos continues, “I hate for them to tell me five months down the line, ‘Hey, you got another six months to be outta here.’”

Even as he says this, though, Ramos is smiling. I keep prodding at the topic, expecting the worry to show on his face. But nothing. “The past is the past, the future you don’t know what it’s going to bring,” he says. “I’m worried for it, but I don’t have the power to change it.” I ask him if there’s anything else he would like Columbia students to know, and he responds enthusiastically, “We have snacks!” 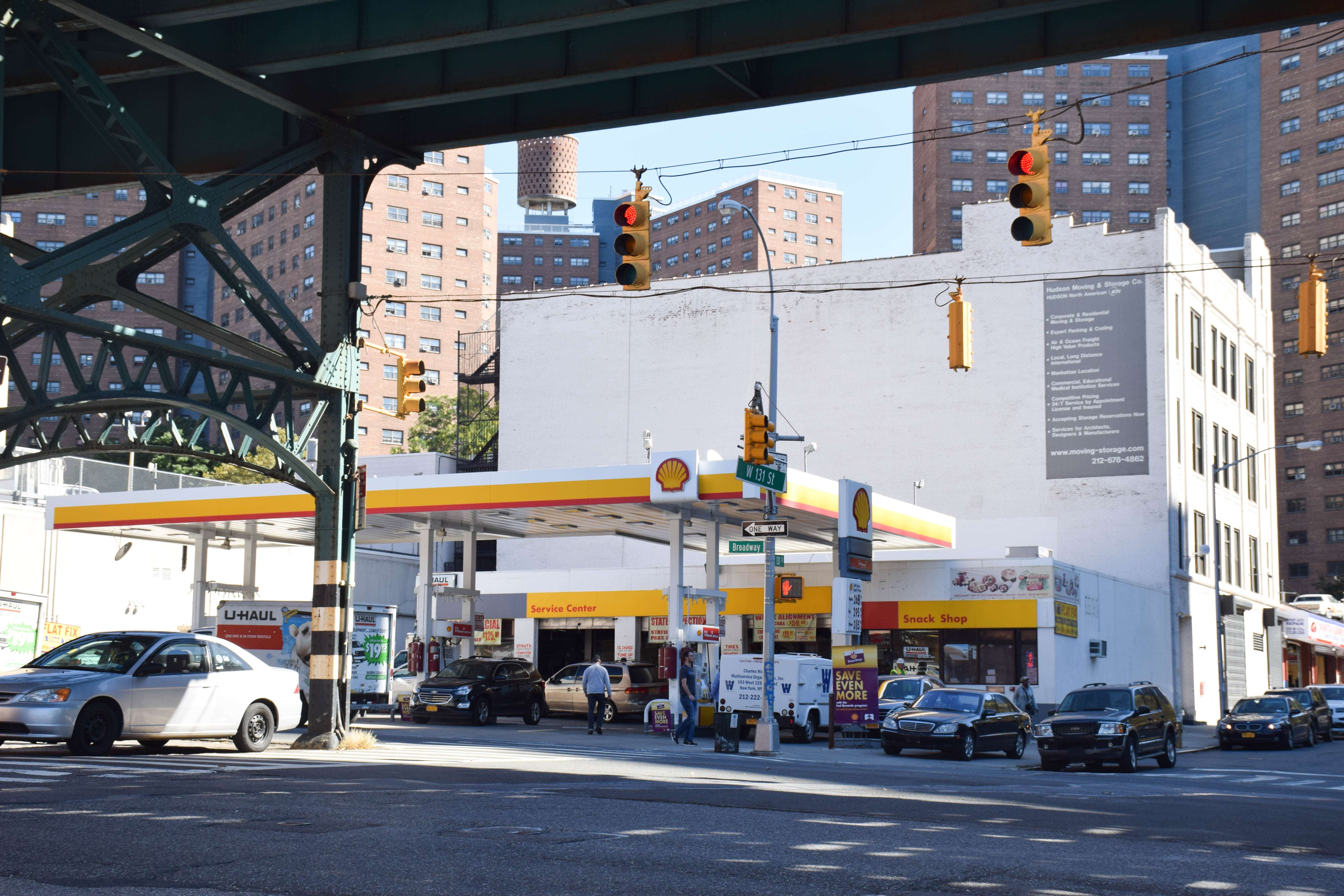 The more content he appears, the more I want to worry for him. His optimism induces my pessimism. After the interview, I step out of the gas station. The Jerome L. Greene Science building, a construction site, and the vacant Tuck-it-Away building face me.

Ramos is at the frontlines of such an unclear future, where he doesn’t know if he’ll be here in the next five months, let alone the next five years. I wonder if his vibrant optimism is all that he has or all that he needs. Either way, it’s enough for now.