Erik Gray Isn't (Quite) a God

Erik Gray Isn't (Quite) a God 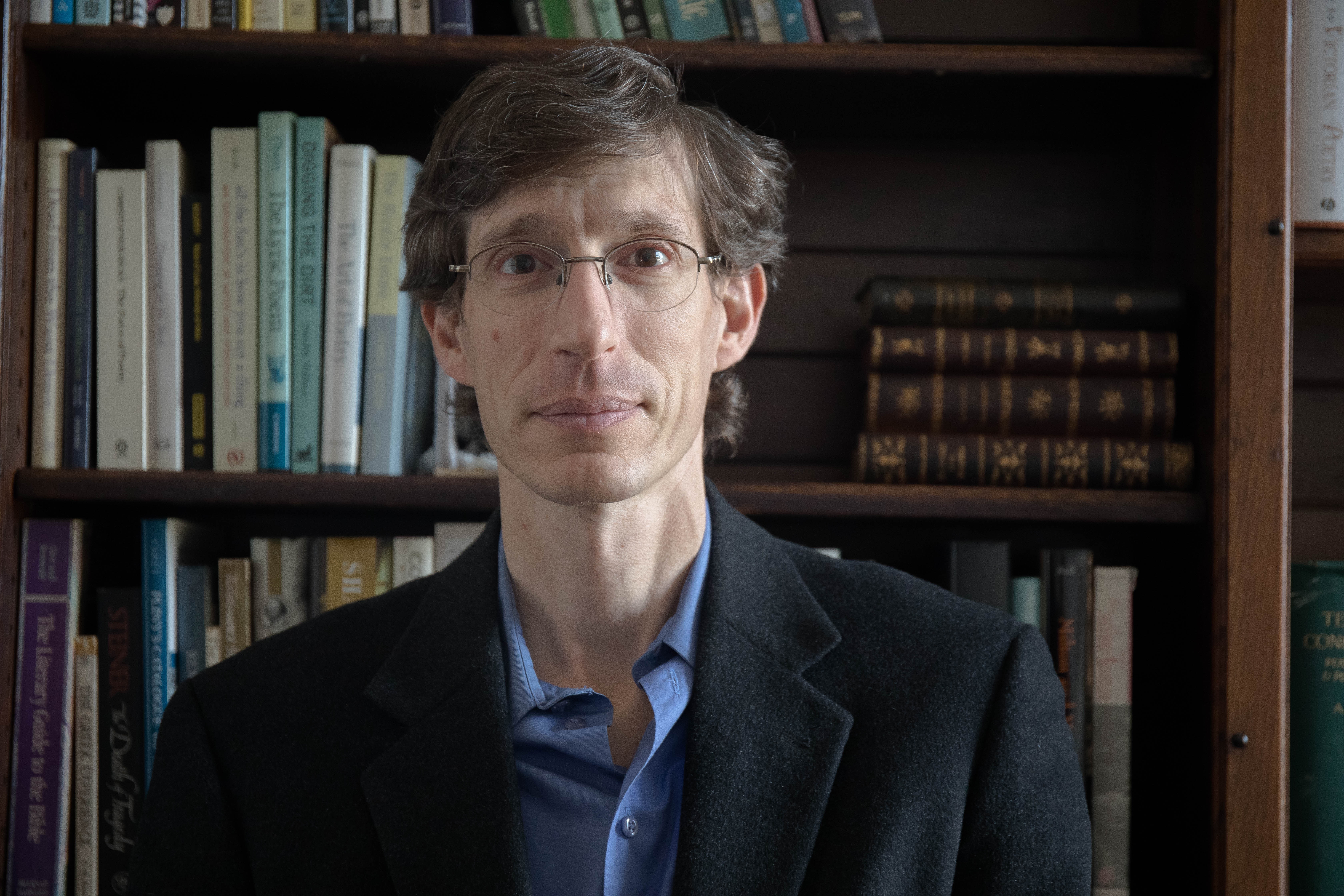 Professor Erik Gray’s CULPA reviews walk a fine line between healthy admiration and cult-like hero worship. One person says Gray is the “best thing to happen to this world since Kraft mac and cheese.” Another asks for his hand in marriage. A reviewer admits that they “totally sip the [Erik Gray] Kool-Aid.” A fourth simply says, “Erik Gray is a God.”

I sit down with Gray, who teaches in the department of English and comparative literature, to investigate his divinity and other pressing matters. We meet in his sunny, orderly office in Philosophy Hall. He motions for me to sit in a chair across from his desk; I imagine that hundreds of students have sat here before me to ask him questions during office hours. Books like Romanticism and Consciousness and The Madwoman in the Attic cover an entire wall. Gray is tall and thin, and when he leans forward his suit jacket rides up almost to his ears. He looks a little like a ’90s-era Bill Gates.

Gray primarily studies John Milton and Victorian poetry, but he also teaches seminars on the Romantic era. He is currently the only professor who specializes in the Romantic era in Columbia’s English department.

But it wasn’t always this way. According to Gray, Columbia was once a “powerhouse in Romantic studies,” but faculty numbers dwindled. The last long-term Romanticist to go was “the great” Karl Kroeber, who died in 2009. Columbia then hired another junior professor, Anahid Nersessian, who stayed only three years and left in 2014. Three years later, the search for an assistant professor specializing in the Romantic era is underway.

In the meantime, Gray doesn’t seem particularly frustrated by his lone-wolf status—although to be fair, he is generally so upbeat that it is hard to imagine him frustrated at all. In a welcome departure from the viewpoint of most academics, he does not think of his field as a panacea for all the world’s problems. I ask him about the role of poetry and literary criticism, and he replies, “Does it help us in the current political climate to redress injustice? Not as much as the same amount of time and effort spent in a more practical form, no.”

Gray acknowledges that his field may feel niche to some people. According to him, one of the drawbacks of studying literature is that, for most of what he studies, one has “to already have read something else in order to understand it.” Of course, these “prerequisites,” as he puts them, aren’t a problem in classes where students have a syllabus and required readings to guide them. Still, Gray does note with a sigh that some of his favorite works, such as Edward FitzGerald’s Rubaiyat of Omar Khayyam, aren’t accessible to everyone because of the background knowledge they require for their full appreciation.

This is a shame because, according to Gray, art “opens your mind” and allows humans to “express themselves, to explore things that cannot be looked upon, cannot be considered as well in more standard, rational, practical methods or habits of life.”

He tells me that people are mostly “talking to themselves” these days, reading only perspectives with which they agree. Studying art from other time periods, he says, requires one to understand a way of life that is different from one’s own. Still, Gray admits that his field, 19th century British literature, is not so alien from his own life.

Gray grew up in Charlottesville, Virginia, attending a synagogue between a statue of Robert E. Lee and and another of Stonewall Jackson. He offers his take in response to the violent demonstrations there in August. Although he thinks parks named after Confederate figures should be renamed, and the statues removed, he doesn’t think “throwing them into the river is a good idea.”

“I always think that [we should] keep the past in order to study it, think about it, contextualize it,” Gray says. “It will be recontextualized again later.”

He did his undergraduate work at Cambridge, and Britishisms such as “amongst” and “quite” still dot his speech. He does not neglect “whom.” He twice describes someone, with no apparent irony, as a “gentleman.” He also refers to this publication as “the Spec.” He is jolly and self-deprecating; he jokingly tells me that his junior thesis “was not well received” and his adviser “abused him roundly.”

As a graduate student at Princeton, Gray prepared nonstop for classes. When one week’s class ended he would spend “the intervening six days and 23 hours doing nothing but preparing for [the next] class.”

Although his work ethic has mellowed slightly with age, Gray says he still puts “days and days” into one two-hour seminar each week. Karinya Ghiara, a junior in Columbia College studying English, has taken two classes with Gray and is currently taking her third, Romantic Margins. She confirms that “it’s obvious it’s all been planned out.”

Still, both student and professor stress the importance of the class reaching conclusions on their own. Gray says that he tries to think of questions that will spark a targeted discussion. When he teaches Hamlet, for example, he first harkens back to the choruses of Greek tragedies. Some number of carefully planned steps later, the class realizes just why Hamlet is a representative tragic figure. Ghiara describes class with Gray as a journey and stresses that while each class period reaches a conclusion, it always seems to happen organically.

When I ask Gray for the SparkNotes version of the lecture, he demurs. “If people want to hear it, they can always come to my first lecture and not come back.”

His enthusiasm in lectures is a big pull for students. Rosa Schneider, a graduate student in the theater department who was a teaching assistant for Gray’s Literary Texts, Critical Methods course in 2015, says that students really loved his lectures. “He’s a really great performer,” Schneider says, “and as a theater scholar I can say that.”

Ghiara tells of one recent class when a particularly exciting chiasmus in the Rime of the Ancient Mariner made him jump up and giggle. Gray’s laugh, which I hear frequently during our interview, is indeed rather giggly.

In terms of praise, the students with whom I talk pick up where CULPA leaves off. Ghiara apologizes for “gushing” during the interview. “He’s popular for a real reason,” Schneider tells me. “He really knows how to interact with students and interact with them on a micro and macro level.”

When Gray won the Lenfest Distinguished Faculty Award in 2014, the department chair, Nicholas Dames, was quoted as saying that the enrollment in his classes on Victorian and Romantic poetry “would have seemed unimaginably large prior to his arrival.”

What criticism there is centers on his preference for a lecture format, rather than a discussion-based one. Gray says that he loved lectures as a student, feeling that he got “more per minute” out of lectures than seminars, but that he is not out to convert anyone. Other students dislike his preoccupation with poetry and meter. As Schneider recalls, “Some of the students who were not as interested in poetry didn’t really understand why they were doing scansion.”

When I ask Gray to respond to his reviews, he interrupts me for the first time, claiming he has never looked at CULPA. I finally pass on just one review, which scoffs at his gold nugget, claiming instead that “he deserves his own special nugget category of the finest, rarest metal in the world.” The silence that fills the room as Gray processes the comment is endearing. Finally, he smiles. “That’s very nice to hear.”

Gray is much more effusive in his praise of his colleagues. He never mentions them without some positive modifier, calling them “superstars in their field,” “the most brilliant possible,” and the “very best.” He says that Columbia has “arguably the strongest Victorian department in America,” but assures me that he can say so humbly because he works with poetry, and the department rests on its prose specialists.

Indeed, Gray seems careful to validate almost every discipline. He dismisses the idea I float about poetry being an especially good medium for broadening perspective. After I suggest a poorly thought-out analogy between controversial athletes and controversial members of the literary canon, he says they “are quite different” before assuring me that he highly values athletics. Gray says that he is a Yankees fan but “in a complex way.” Indeed, he cannot refrain from intellectualizing athletics, dropping the phrases “tribal identification” and “expression of competition” and citing the presence of athletics in Homer.

The whole interview I was working up the courage to ask about the rumored tattoo of Percy Shelley on his chest. This rumor, which I heard about from several sources, seems to have spread primarily because of his WikiCU entry. Gray will neither confirm nor deny the existence of any such tattoo. “I am fond of Shelley, though,” he notes.