An American in Jordan

An American in Jordan 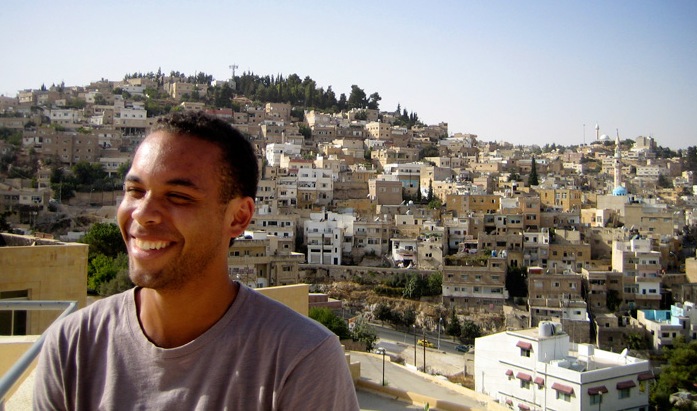 The setting of the sun has taken on new meaning for me during the Muslim holy month of Ramadan. I am living in Amman, Jordan with a host family that is of Palestinian origin. They live in an area called Dahiyat Al-Rashid, in a large apartment in a building atop a hill overlooking much of Amman. While here, I decided to fast. This is my first time, and it has been hard for me. But I wanted to understand, in my own way, the spiritual experience of this holy month for the people of my host country. I chose to fast because I wanted that spiritual experience. And I continued to fast, and I enjoyed it, because it elated my family as they welcomed me warmly into their traditions. As the sun's reddish light explodes from the horizon on the first day, my host father offers me a date. Swallowing is difficult after not having consumed anything for many hours, more difficult than you might think. I am in Jordan on a program called Modernization and Social Change, through a study abroad institution called SIT Study Abroad.The topic of modernization is a complex one: It inevitably brings up Westernization and how this particular country navigates a relationship with the "Western" world. Thus far, we have discussed the women's movement in Jordan, Jordan's political system, its history, the development of its youth, and modernity in the Islamic tradition. And yet, even among American students living in Jordan, one nevertheless encounters a certain Western elitism. Its easy to see the problems facing the Middle East as too horrific, too beyond our so-called benevolent comprehension, or as a mixture of both. Though all the students are from the West, we are all living with Jordanian families, and our world views are brought into contention with those of our hosts almost daily. Fasting is an act that requires moderation and patience. And now, at the end of the month of Ramadan, I have even learned, surprisingly, to revel in it. Through fasting, I have gained a certain understanding and empathy that has smoothed over some of the initial friction with my family. Such empathy, in part, is what made my choice to fast so easy, and perhaps what made cessation not an option. As difficult as it is for me to admit, blending into this place is impossible. Although I am brown-skinned, speak Arabic with relative fluency, and am perhaps ambiguously ethnic enough to fool Americans, it is obvious to Jordanians that I am a foreigner, more obvious that I am from the U.S.—and hateful though it is to admit it, this fact shames me. Resenting my nationality, I initially endeavored to reinterpret my own identity upon moving here. When the program began, I resented my Westernness and the privileges I have as a citizen of the U.S., privileges that much of the world does not enjoy. I have been to several countries in the Middle East and Africa over the years, and for some time, I felt as though I was trying to run away from my American citizenship, to deny it in this distinctly non-Western part of the world. Through fasting, I have been able to reach a place that is both more in touch with my innermost thoughts and that has allowed me to come to terms with my nationality and identity. During Ramadan, every day is a new beginning, and it has made the beginning of my time in this country all the more meaningful: Each day of Ramadan is its own process, and each day in this new country brings a new challenge and new understanding. As a foreigner who has chosen to fast, I am seen in a different light than foreigners who have chosen not to. The Jordanians' welcome is warm no matter what, but perhaps in fasting, my foreignness, my modernity, my Westernness, and my American citizenship—like the dates my host father offered nightly—have become somewhat easier to swallow with the unfolding days of Ramadan.