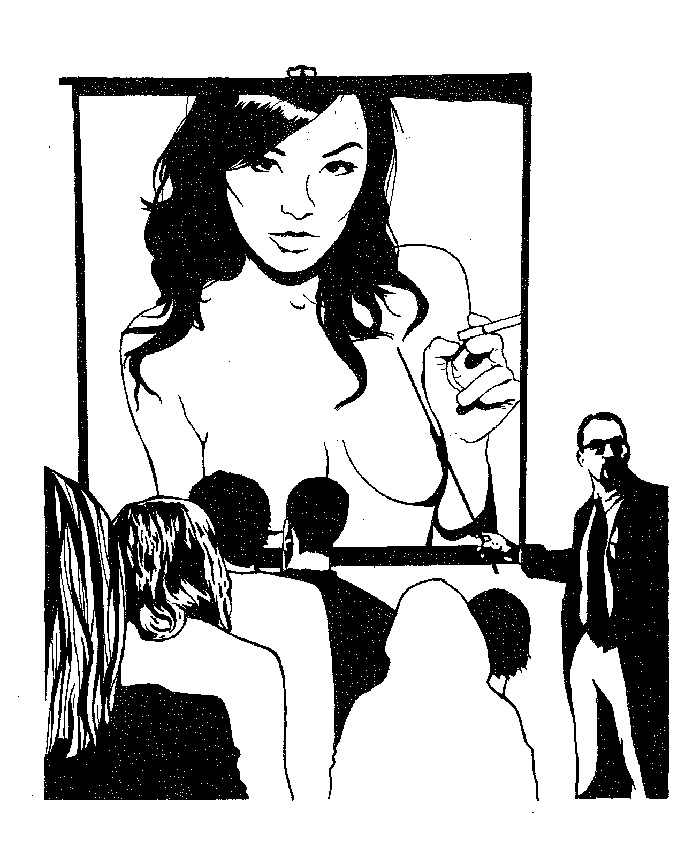 "Right, right, it is mainly black pole-white hole," casually speculates Columbia Humanities Fellow Dr. Jennifer Nash on current pornographic trends. "It's pretty hard to find films on white men and black women." To most, pornographic studies sounds like some clever euphemism for masturbation rather than a serious and fruitful academic pursuit. Both the public and academia have long considered pornography a closed case—a deplorable medium devoid of any merit to society. But recent scholarship questions this wholesale rejection of pornography. Nash argues that scholars and society alike should open up to the possible merits and social uses of pornographic images. Nash draws this conclusion from the insights gleaned through her studies of "black female-white male" hard-core pornography of the last forty years—a form despised above others for its "racist" depictions of black women. Instead of dwelling in these claims, Nash focuses her research on the way pornography can serve as a unique sociological document. She points out that the images of black women in these films, geared towards primarily white males, reflect a certain social mind-set: "Black female bodies ... are not culturally permissible as objects of desire for white men," says Nash, continuing "I mean it's seen as alright to just fuck one and leave it at that, to see what ti's like, test it out. But that's about it." Viewing porn can be an introspective process that reveals much about our individual and collective social tastes and taboos. Race relations, body image issues, cultural trend obsessions, and any number of revealing personal and global facts all may be captured in a few minutes of human intercourse. And though pornography is pure fantasy, it can reflect very real social norms. "I'll hear girls in my class complaining about how hard it is for them to find a man and I'll say 'hey, why don't you just date a white guy?' And they say 'Oh, no, they'd never have us.'" Nash admits that, "Modern hip-hop, mainstream pornography is some of the most blatantly degrading to women," and finding social value within it is rather problematic. But with the advent of amateur video technology, Internet proliferation, and simple editing and file sharing tools, an extreme plurality of pornographic materials has arisen, allowing even some feminists to reclaim the industry and produce a type of porn illustrating that pornography does not have to be degrading to women. Some of the materials also mitigate the isolation and psychological distress of many sexual minorities. Nash explains, "A gay man in Texas could go to a theater to see a porn and realize, 'Whoa, I'm not the only one who has these feelings.'" Pornography also provides a necessary sexual education beyond the basic heterosexual mechanics taught in schools. In this vein, one recalls a late night caller to Talk Sex with Sue Johanson: The caller was a recently un-closeted gay man terrified of sex with his partner because he did not understand the sexual mechanics behind his own desire. In this light, one might understand the comforting and educational function of hard-core films. Nash says, "These films can teach us much about sex, bodies, alternative forms of pleasure, and in that way provide comfort—they might even be a bit part of sexual education, like seeing genitals. For some people, that's the first time they see genitals other than their own." But is this educational value worth the degradation of certain films? This is hard to say as even experts still debate the point at which a film becomes debasing and harmful. Officials working in sexual crimes have noted that pornographic materials can enable the darker fetishes of pedophiles, rapists and the sexually abusive. Nash also recalls complaints by wives that their husbands' addictions to porn had damaged their marital unions. But Nash downplays these negatives as evidence of the panicked mind-set of the modern era. She says, "This [mentality] leads to a fear that what we view is what we do. It's not so one-to-one." It is hard to gauge and weigh the comparative benefits and damages of pornography, particularly because it is hard to teach or discuss pornography in the academic setting. Nash offers up a reason, "We've got this thing where intellectual work should not be arousing ... People getting off on their intellectual interests, it's just not accepted." However, occasionally a class on women's or gender studies will breach the topic. The one prominent case of an outright "porn studies" class at UC Berkeley drew a great deal of scandal. Universities fear both the popular backlash to such a brazen overstep of social taboos and the awkward situation of presenting materials that may incite arousal. "No university wants to be seen as a loony bin and unfortunately having legitimate porn studies gives off that opinion to most," Nash says. While nudity and limited sex in art are acceptable, there is a thin line between artistic representation and sexual documentary. Often unable to cross this line, scholars like Nash are limited in their ability to share their insights on the merits of filmed sexuality. Even solitary academic pornographic research is often stymied by the lack of an independent gender studies department. Columbia does host the Institute for Research on Women and Gender, but it draws members of the Institute from varied departments. Their obligations to their home departments limit opportunities for meaningful research on any number of subjects. And so, Nash acknowledges, gender studies—and by extension pornography studies—reaches a catch twenty-two situation: A limited body of work leads students to judge the field as illegitimate. The students then neglect to create the demand that would create a department or increase funding, stagnating the limited literature on the subject. But while pornographic studies may remain academically off-limits, we can attempt to expand our horizons individually. "We have to go to the place that makes us uncomfortable and ask why it makes us uncomfortable. ... Repulsion and attraction are heavily socially constructed experiences so it's a matter of finding the root of it and looking at that."