Turn My $wag On

Turn My $wag On 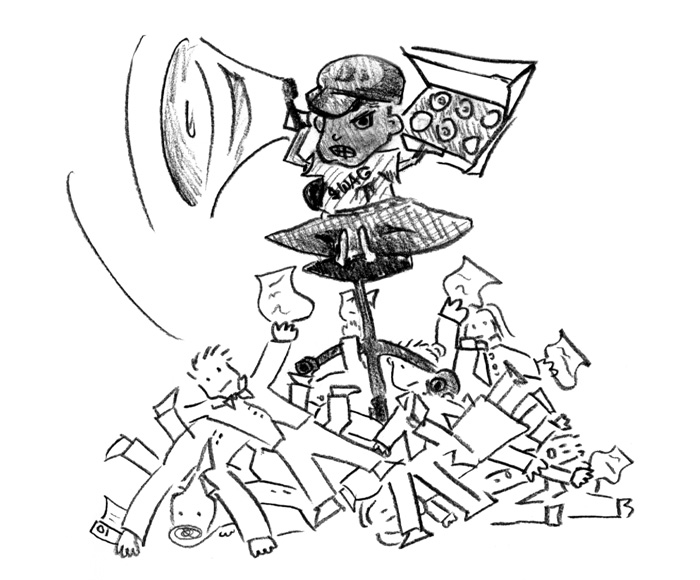 Beside Lady Gaga's gender-bending role-play and Justin Bieber's possibly alcohol-fueled religious ramblings, there was one other scandal at this year's MTV Video Music Awards—the battle for Best New Artist. In an unexpected upset, the fan-voted award didn't go to rap superstar Wiz Khalifa—the favorite by far, anchored by a platinum-selling album and world-spanning arena tour. Also leaving empty-handed were breakout success stories Big Sean, Kreayshawn, and Foster the People. The winner was a 20-year-old skater from California dressed in a tie-dyed cat T-shirt and a wide-toothed grin. The kid was Tyler the Creator, the ringleader of rap entourage Odd Future Wolf Gang Kill Them All. Though his nominated song, "Yonkers," generated plenty of buzz online, nobody in the amphitheater seemed to have any idea how this goofball rap jester could cause such an upset. The victory speech was largely bleeped, except for periodic shouts of "SWAG!" The cameraman's cuts to celebrities' reactions (for the most part, shocked and amused) no doubt mirrored those of viewers. Just what is "swag," and how did it enter our musical and cultural conscience? A term defined by urbandictionary.com as being "the way one carries oneself," "swag" has come to embody a new lifestyle comprised of equal parts class-clown goofiness, cool-kid cynicism and plenty of confidence. At first glance, it looks like shorthand for "swagger," and really, it's very similar. But more than anything else, "swag" is about coolness persevering no matter what barriers are in the way. Indeed, Odd Future's reputation as swag forbears is likely rooted in the fact that their success came from adherence to the so-called tenets of swag philosophy: Do it yourself, don't listen to haters, and stay true to your own style. A collective of talented rappers, singers, hype-men and beat-makers known for their frantic live shows and consistently solid (and wholly self-produced) mixtapes, Odd Future built up a dedicated fan base of skaters, misfits and hipsters in their native Los Angeles before being courted from everyone from Jay-Z to Diddy in one of the biggest rap bidding wars in recent memory. The group's outrageous demands ("If you are serious about the meeting, I want Randy's Donuts, swivel chairs, and a megaphone," Tyler famously announced to label execs) were completely anti-establishment and, thus, totally "swag." Indie mega-label XL Recordings ended up wining out, but only by acquiescing to Tyler's demands for complete freedom regarding all matters, snacks or otherwise. Somewhere in the middle of the bidding war and the maelstrom of hype it stirred across the internet, hashtags of "#swag" started to proliferate on Twitter and Facebook. This was perhaps in part as a direct result of Justin Bieber's pickup of the phrase. Interestingly enough, as part of Diddy's efforts to woo Tyler et al, the mogul arranged for the Canadian pop-tart to meet the rap crew—a genius request on Tyler's part, as it allowed his stylistic brand of "swag" to reach the millions of Beliebers worldwide. A bevy of new artists carrying the swag flag followed: the equally prolific, DIY-inclined Lil B, electro-rap duo New Boyz, and aforementioned breakthrough female rapper Kreayshawn all generated buzz this year. Even established acts like Chris Brown and Kanye West reinterpreted the phenomenon with albums oozing with swag's characteristic cocky bravado and bold, organic beats. There is, of course, one large question mark hovering above this entire thing: Why is cocky, self-produced, unapologetic rap engulfing the hip-hop scene and taking aim at the mainstream? In addition to the scene-starting spark produced by unique artists like Odd Future, there's something to be said about our cultural mindset in the year 2011. While the economy flounders and petty squabbles on Capitol Hill breed a sense of apathy in American youth, the Internet and social media allow pent-up attitude to be transcribed into a Pro Tools track and uploaded en masse to millions. Just like punk and grunge before it, "swag" connects fans by tapping into the very things that keep them sane in this crazy age: their individual senses of style, their apathy toward the "man" and the world at large, and the catharsis enabled by raw live music. WBAR hip-hop DJ Olivia Parker, a sophomore at Barnard, explains Odd Future: "The crew is a really young group and they are mixing genres, making them different from the rest. They basically invented modern day alternative hop." As with most musical trends, there is a chance that the entire thing will fizzle out and that swag will lie alongside "rad" and "far-out" in the graveyard of embarrassing decade slang. Perhaps Tyler's victory at the VMAs is the voting public's way of acknowledging the movement and giving it a push into the mainstream. What happens next is the real test—the test of whether or not Odd Future and company will continue to connect with audiences and blogs and put some much-needed life in the dying record industry, or if Tyler's swag ship sinks. Tyler plans to release a new LP, Wolf, this year, and records from other scene artists are no doubt on the horizon, giving mainstream consumers plenty of chance to have their say. Whether those chants of "SWAG" will go down as the rallying cries of a new musical movement, however, remains to be seen.