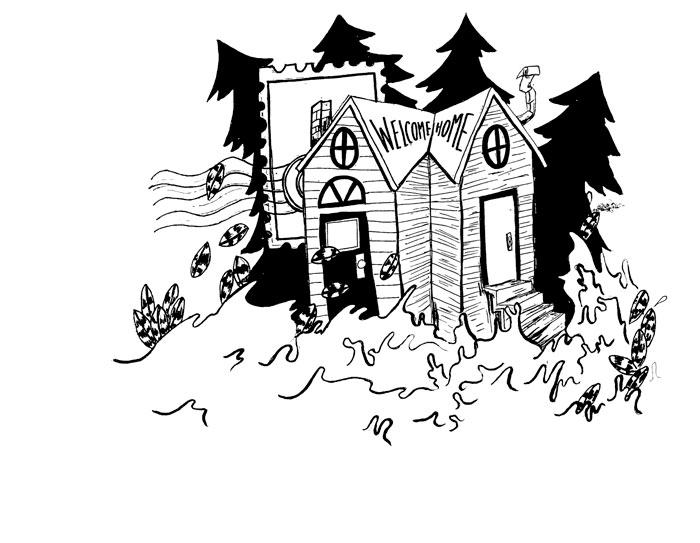 The blue Real Estate One sign stuck out of the rocks on the shore. The dock had rotted years before, and zebra mussels, an invasive species that looks like striped pistachios, populated the shallows. The house itself, protected from view, needed repairs. In 2001, prospective buyers called it a tear-down. My grandfather had built it 40 years earlier for his five children and for us, the future generations. When my grandmother decided she could no longer keep it up, nobody else offered. If you think of Michigan as a hand, Charlevoix is located at about the tip of the ring finger, situated between the vast Lake Michigan and the smaller Lake Charlevoix. It takes 15 hours to drive there from my parents' home in Maryland. And yet, no matter where we are, it continues to reel us back. When blooms and birds signal the beginning of spring, my senses beg for the August completion of summer. It could be the near-century's worth of family tradition, or just the northern woodsy beauty of the place. It could be waking up to shampoo our hair in the lake. It could be reunions with my parents' childhood friends and college professors, or the postcards they sell at the old Rexall drugstore that depict my grandfather sleeping on the beach. It could be the smell of fudge from Murdick's, the rainy-day trips to Petoskey, or the heated games of cribbage we all play with each other. It very well could be the gold-lit walk down East Dixon Street to sneak one last swim in before the sun sinks at nine. To put it simply, we return for the love of a place that seems like a person. Somebody bought, renovated, and sold our house. They preserved some of my grandfather's handiwork: a green-tiled shower, the stone fireplace, and the lofts in the bedrooms, but everything else changed. They made it look unlived in. The brown, peeling cabin I knew is now white with aluminum siding. The wraparound deck is gone, and so are most of the evergreens. We've rented houses in town the last few years and stayed for a week or two. When I was younger, we would have stayed for all of August. A week is just enough time, if you squeeze, to do everything important once. But it's not the same, at least to me. When I was younger, I could enjoy Charlevoix without fear of losing it. I could stretch the weeks into months, and the years to eternity. Now our relationship has devolved into a complicated long-distance one: a glorified past, an unsatisfying present, and an uncertain future. At any of the Lake Michigan beaches in Charlevoix, you can look to your left and see a cement plant. It looks at once otherworldly and outdated, a large grey dome attached by a chute to a set of cylindrical structures. One morning during our week-long stay last summer, I went for a jog toward the plant. Frustrated by this blight on the horizon, I was intent on confronting it. If I got a closer look, I thought I could reach some understanding with it, or at least stop hating it. A barb-wire fence and NO TRESPASSING sign halted my exploration. I ran back toward the cleaner end of the skyline, kicked off my sneakers and dove into the cold, unpolluted water. I had always fixated on the plant. Always found it impossible to just look the other way. I wondered how such a good place could allow something so unpleasant. But unpleasant is all it is, really. Standing on the other shore of the Great Lake, you can't even see it. And there are certain things I will never understand about Charlevoix, about its economic and environmental needs: why they built the plant in the first place, and why they haven't torn it down since. I do not know what it's like to embed oneself fully in the town, to make a life there rather than a vacation. The plant has been there longer than I have been alive, and it will probably outlast me. I suppose it is just one of Charlevoix's many facets and faults that I have to embrace if I want to continue to love it. When I was younger, it was easy. Charlevoix never challenged me, only enveloped me. Now it needs something in return. It demands I dig inside the chunk of my soul that I gave up to it so many years ago and decide where to go from here, whether I can forgive the town for its faults, and whether I can forgive my family and myself for mostly abandoning it. I have struggled with these questions, only to come to the same inevitable conclusion: No other relationship has ever seemed more worth the effort. Last August I brought my friend Maia, whom I've known since I was five, up to Charlevoix. One day, my dad rented a small motorboat and drove us around the south arm of the smaller lake. We paused at the white house that used to be ours. It stood bare and stark in the clearing. Looking up at the old family home from a rented boat, I had never felt more like a visitor. We drove away, picking up speed and drawing out a wake of fresh water that splashed our faces as we sat in the bow. Maia stretched out her legs and I curled up in a towel. She sighed and said she was having one of the best days of her life. I laughed, hoping it was true. My father beamed. She had only been there four days. A little less than a year later, as I notice the blooms and birds and trees and rain come out for spring, I feel a familiar itch. I cannot help waiting for the end of summer.