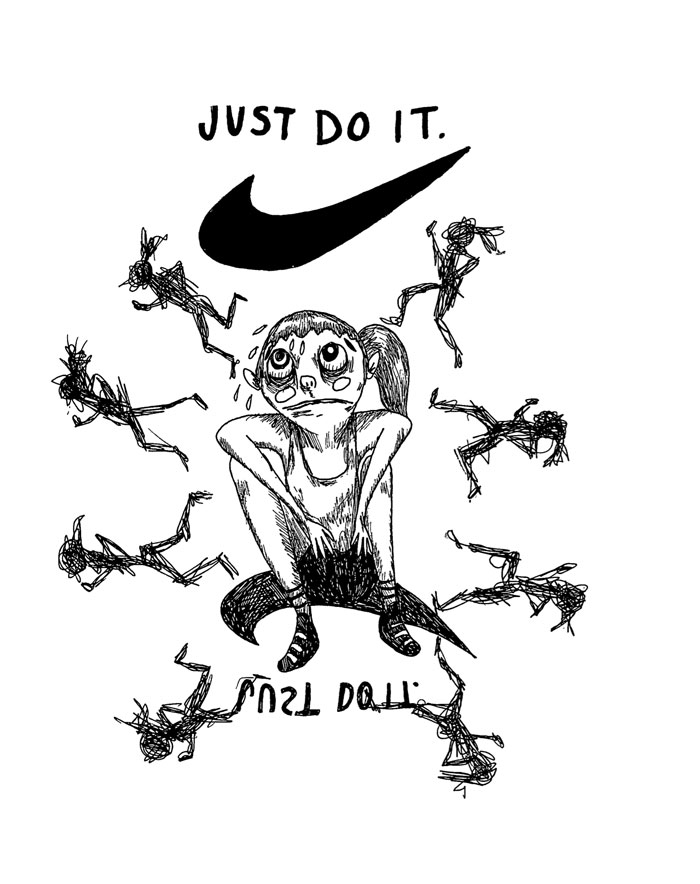 "Deserve Victory!" The poster reads backward through the mirror in my bedroom. I wake and find Winston Churchill's round face and stubby finger pointing at me. I whip off my covers like a Band-Aid, walk over to the dresser, and set clothes on the bed. I dawdle in the bathroom, applying lotion and powder to my entire body, drinking warm tap water, brushing the unsavory taste of morning out of my mouth, and pulling my hair into a tight ponytail. I stare in the mirror in just a sports bra and shorts. I slip on my favorite tech top. I put on my latest pair of Mizuno sneakers, and finally, my little digital watch. I take off out the front door. I have practiced this routine for years now, since I was 15. I started running to make friends at a new school. I kept running because I was good at it, and it helped me stay healthy. Long after moving away from home, I continue to run because it makes me happy. "To be really happy and really safe, one ought to have at least two or three hobbies, and they must all be real," Churchill once said. I smiled reading the quote while walking through "The Power of Words" exhibit at the Morgan Library this past summer. Next to the quote hung a shabby, amateurish landscape that Churchill had painted and gifted to his bodyguard. I began to think of running as my real hobby—not a calling, per se, but something complementary to other pursuits that creates a delicate balance. This summer, I began training for my first marathon. The preparation never felt grueling, but certain runs were more challenging than others. Because of the heat, I had to wake up early or wait till sunset. I turned down invitations to afterwork drinks. My idea of happy hour was spent running along the Hudson toward the half-built One World Trade Center with the red sun warming my right side. On the weekends, I carved out hours to run 10, 12, or 14 miles. These relaxed distance runs were essential for building endurance. When school started in the fall, I ran distances with a group via the Road Runners Club. Having people to talk to made the time pass, and the unspoken competition led to higher speeds and lower times. Three weeks before the race, I was relaxed and ready. This was not always the case. Sometimes I was unmotivated or sluggish. Sometimes I got bored and lonely. Sometimes my skin burned from blisters, chafing, and sweat. Sometimes the smells wafting from the street carts and grates sickened me. Often there were just too many people in New York. My over-awareness of my body in the process of training caused me worry. I wondered if the joy I derived from running was merely a shallow offshoot of vanity. Was I self-obsessed? Probably. These thoughts only perpetuated the worry, which slowed me down. I wondered if I was wasting time better spent working, writing, or serving others. I doubted my status as an athlete. My mind began to dizzy itself with all the circles it ran. I was not good enough, I was not pretty enough, I was not strong enough. I gave myself mantras to say aloud to dissipate the buzz. I had a minor breakdown in August while running through Chelsea on a gray morning. I had bought a new watch and somehow lost it. I had barely made it a mile before I started crying. I turned to go home and call my father. He said that it was normal to experience doubts. He told me that it was neither necessary to do this during senior year nor was it normal. That gave me the resolve to continue on. A marathon was, and is, much easier to conquer than the nebulous post-college "future" that lies ahead of me. As training picked up, I ate more and more and partied less and less. Friendships flickered, grades came back worse than usual, and participation in other activities became haphazard. The will to complete one goal eclipsed all others. Still, I was somehow happier than ever. It was as if the consistency of my training regimen had replaced the consistency I had been missing ever since leaving my parents' home three years ago. When I met them in Philadelphia on Nov. 17, I brimmed with nervous excitement. We went to the marathon expo to pick up a bib with my name on it, and I stopped by the CLIF Bar Pace Team booth for a wristband with time stamps that corresponded to miles that I could follow to reach my goal time, a Boston Marathon-qualifying 3:35:00. I crossed the start line a little after seven the next morning, and for the first ten miles, I could have flown, had the wristband not reminded me to stay steady. The fall leaves crunched under me, and I dutifully drank Gatorade at the fuel stations. Near the halfway point, a bald man in a white bandana and neon T-shirt started talking to me. I asked him and his friend what pace they were aiming for, and then I asked to run with them. They made the next 10 miles pass quickly as we chatted and tallied how many bystanders shouted our names. They sped up for the last few miles, but waited at the finish to congratulate me. Later, I would look at race photos and see myself grinning as I leaped across the line, well within my goal. After, I found my parents near a statue of Rodin's "The Thinker." They hugged me over the crinkly space blanket that was supposed to warm my tense, crusty body. We shared a moment of unabashed pride and love. And just briefly, there was no future to worry about. I basked in the victory I felt I deserved, and I hoped it would never fade, as I knew it would, along with the heavy ache in my legs.