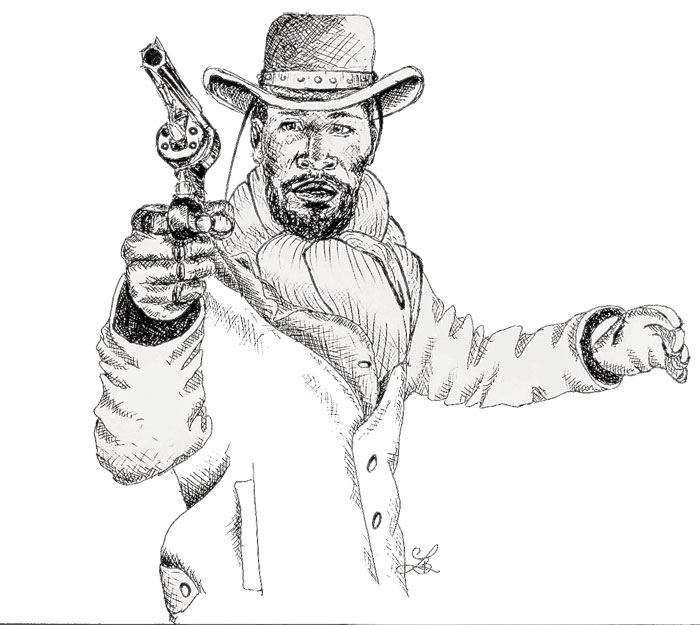 Django and Broomhilda share the quintessential cinematic kiss and ride off into the sunset—it's the expected superhero film finale. The plantation has been blown up in a spectacular show of classic Tarantino violence, ending slavery as we know it in this imagined world. Unfortunately, as American history is all too well aware, the end was never as simple as it was in Django Unchained—it took a lot more turbulence to rid our country of slavery, not to mention to take on segregation, and it will take even more to address the persistent ubiquity of racism in our so-called "post-race" society.

The past 12 months have seen the release and success of three blockbuster films that focus on American slavery: Steven Spielberg's Lincoln, Quentin Tarantino's Django Unchained, and Steve McQueen's 12 Years a Slave. These movies have arrived amid an array of independent or foreign films depicting slavery, including Belle, Tula the Revolt, The North Star, Savannah, and The Keeping Room, which is why some film pundits have dubbed this trend "slave-movie fever." However, this phrase is exactly what has Jamal Joseph, a professor of film studies at Columbia's School of the Arts, concerned: "Every time this happens, it tends to be kind of like a wave, like a fad, flavor of the month or flavor of the year, and then it can fade—that's what I'm afraid of happening," Joseph says.

The term "renaissance" has been thrown around rather loosely in reference to this year's surge in films documenting the distinctly African-American narrative of slavery. However, many have been quick to discourage this idea, given how fleeting Hollywood trends can be. "Saying that it's a renaissance in a way is dangerous because, number one, it creates a certain expectation," Joseph warns. If this expectation isn't fulfilled, in terms of profit or popularity, the struggle to make these movies will be as difficult as ever.

Indeed, these films are a refreshing diversion from the precious little diversity we've seen in Hollywood's version of African-American cinema, which has lately been dominated by the farcical Tyler Perry. But several directors and actors, like 12 Years A Slave's Alfre Woodard, have suggested that the timing of these films is simply serendipitous. These movies didn't pop out of thin air, and as Joseph argues, "There have always been filmmakers who have wanted to tell these stories—filmmakers of conscience, both black and white ... and they struggled for years to get these films made."

It's also important to note that this year isn't the first time there's been a bump in the popularity and quantity of films about the African-American experience. In the 1970s there was blaxploitation, a popular but controversial subgenre of the larger exploitation film movement which takes advantage of current trends in order to compensate for low budgets or cinematic merit. The popularity of blaxploitation is epitomized by Melvin Van Peebles' Sweet Sweetback's Baadasssss Song. Widely considered the first blaxploitation film, it went on to make more than $10 million. Its success was surprising due to its low budget and its defiance of typical Hollywood productions; it explicitly commented on racial tensions in the U.S. Regardless, as the '70s faded, so did the blaxploitation movement, and the praise of Van Peebles' famous film as a new beginning for African-American cinema fell flat.

This current resurgence of cinema focusing on African-American history simply fits too well into this pattern of fluctuations in black cinematic popularity to feel truly new. It's as if we're getting a brief respite from the Hollywood norm—only this time, we're not seeing funk-era, sexy, jive-talking black heroes or Spike Lee's documentaries and narrative films. The trendy topic of choice is slavery.

Slavery remains an uncomfortable topic in American discourse, but the question remains: How far away from slavery are we really? It's been 150 years, and now that we're on the other side of the civil rights movement, it might seem like enough has changed that we can leave slavery in the past. After all, the "leader of the free world" is now a black man. However, there is no doubt that slavery was the back on which American economic success was built and, as Joseph reminds me, slavery and its profits enabled Washington, D.C., and Ivy League institutions like Brown University to be built. It's easy to forget because America cannot reconcile itself with what Woodard called in an interview its turbulent "childhood." The scarcity of films devoted to the subject is especially shocking in comparison to the hundreds of films produced by Germany about a comparable (and more recent) dark period of its past—the Nazi's genocidal actions during the Holocaust. This disproportionate number of films suggests that the reality of slavery's role in our country's identity makes it all the more difficult to address.

Despite the long history that has simultaneously changed and perpetuated racist institutions, it is time that we directly and unhesitatingly address our issues with race. Joseph certainly agrees: "I think we're at a time when we're dealing with the rollback of the Voting Rights Act and Trayvon Martin and stop-and-frisk in New York. ... There's a strong parallel between Django and 12 Years a Slave. There are more black men imprisoned in 2013 than were in chains at the height of slavery, and it has to do with class, and it has to do with race."

The importance of these films lies in the role of art as provocation, as Leon Hendrix, a graduate film student in the School of the Arts, points out: "The point of art is to challenge our standards." Cinema has the valuable ability to take political and social discussions into the abstract, so that we can discuss ideas and narratives, hopefully escaping the stagnation inevitable in wars of ideology.

Yet film's function as an art form is more complicated due to its inherently commercial nature. The question of money in the film world is always looming, because at the end of the day, most films' trajectories are driven by financial concerns. How much will they gross? How many awards will they win? The results will determine the fates of potential future films that deal with the same subjects or that are produced by the same artists.

So it's no coincidence that three well-established directors are responsible for this past year's three most-talked-about movies depicting slavery: The potential earnings for these films were promising based solely on their directors and casts. These movies also play to their audience in that they show victories in the face of adversity. A movie about the typical slave experience—a black man or woman is born a slave, works as a slave, and dies a slave, with no hope of escape—would not appeal to the American audience the same way that a triumphant narrative does, even though it would be more truthful. These observations do not diminish the works in question; they simply explain why we are talking about these movies. It's also why their success matters: If they can make enough money, then maybe another movie about slavery by a different director can be made, and so on, enriching the growing conversation.

The future potential of African-American cinema in Hollywood, riding on the wave of these movies, is the source of much anticipation—even more so than the movies themselves. In an interview, Woodard expressed her eagerness and curiosity regarding her 12 Years a Slave co-star Lupita Nyong'o's career: "This is an incredible launch of a career. ... We will see if, [as opposed to] another brilliant young woman we saw, Jennifer Lawrence, we'll see the trajectory of her path and what she's offered after that. Then we'll know whether things have changed or if Lupita is consigned to playing second banana, ensemble person for the next ten years."

Hendrix has a similar concern: the potential burden of being labeled a "black filmmaker." He has been nervous about being categorized as such because "there are a lot of presumptions about your attitudes on things, the kinds of movies you'd like to make ... and even to some extent, the kinds of genres you'd like to work in." This is not the case for white filmmakers. Hendrix gives the example of an Italian filmmaker: "No one says, Oh, so you're going to be an Italian filmmaker, so you're going to make a lot of mobster movies.'" That's why Hendrix and many others feel that McQueen's other films, Hunger and Shame, have done a lot for black filmmakers—because they go beyond these presumptions and "show that we, like other people, have opinions on subjects like human rights and sexual addiction."

The unfairness in the film industry is a result of studio funding, which operates under the assumption that white is the generic brand, whereas films about black people imply a specific audience. Joseph summarizes the prevailing attitude: "If it was a black film, if it wasn't a comedy, it couldn't make any money," and this belief has created a very specific and persistent, but not necessarily culturally accurate, African-American genre. This limited perspective is likely the result of studios attempting to tailor to the moviegoers (62 percent of whom are white, compared to 12 percent who are black) by producing digestible and comforting films, even if it means perpetuating the kinds of stereotypes we see in Tyler Perry's Madea, for instance.

The tensions created by this imbalance have added further controversy to the conversations surrounding the most recent movies about slavery. The fact that Tarantino and Spielberg are white directors makes a huge difference to the intrinsic messages of their films for some viewers, who are sensitive to the "white messiah" complex. However, protests like Spike Lee's declaration that he would not see Django Unchained because "it's disrespectful to my ancestors to see that film" felt unnecessary in light of the films' potential to enrich the necessary conversation about slavery and race in America.

When it comes to determining whether these "slave films" are simply the "flavor of the year" or if they are the beginning of a wider scope for African-American cinema and a national discussion about race, it is still a matter of waiting for the current fever to break. The hope remains that one day, perhaps, films about slavery won't be deemed groundbreaking, and the slave film genre won't be the primary medium for depicting African-American narratives.