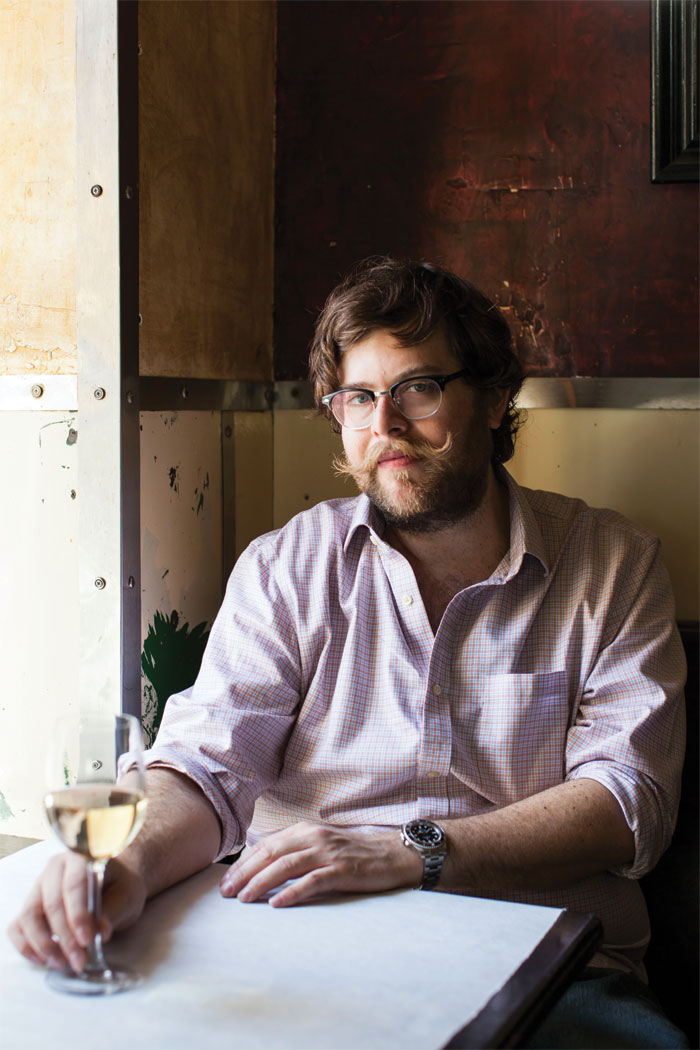 Daniel Krieger's a busy man—certainly one of the busiest food photographers in New York. His client list includes the New York Times, Bon Appétit, the Wall Street Journal, and Gourmet, just to name a few, and he currently serves as the head photographer at Eater.com. After returning from an expedition to Los Angeles, Krieger talked to CHARLOTTE MURTISHAW from his home in New York (occasionally calling on his girlfriend, a food writer, for help with answers).

I like food, just in general; who doesn't like food? And as I started getting into photography, it was fun, and it's a nice experience working with chefs. Chefs are very intense people. Often, they're very intelligent people as well. There's something kind of meditative and relaxing about photographing food. It's just a static thing which isn't moving or talking back to you or doesn't have personality, so it's totally different than shooting a portrait.

Briefly, how does your process generally work?

It really depends. This is something that is kind of different than people who just go out to eat and photograph their food—which I actually don't do that much. I'm usually there on location on off-hours when the restaurant's closed or there's not a lot of customers. I'll have a setup, I might have a reflector—I try to shoot natural light as much as I can. Basically, I'm working with a chef, we're discussing timing, like when dishes are coming out, and we might re-plate things, if I want, to look a certain way. Chefs really understand how to plate things so they look good for photo. It's not as if they're doing it for photography, they're doing it for customers.

Have you ever had to shoot anything that looked totally awful?

I think the worst-looking stuff is things that are served on Styrofoam and with plastic utensils, but that's usually not something that I'm photographing because that's more fast-food-type stuff. There's occasionally things that don't look great, but if I can, I'll try to help out with a suggestion, like maybe let's change the bowl or add some herbs. ... I always say soup can be a little difficult to shoot because obviously with soup there are no layers. It's just a flat surface, often one color, so sometimes it can be a little tricky.

Who's the most famous chef you've worked with?

I've worked with Mario Batali a few times and I really like him, he's a fun guy. He's one of those guys that's really kind of down for whatever and very friendly, kind of like, "Let's take a picture with this or do that." I have a good shot of him where he took these lamb chops out, a big thing of ribs, and he leaned over it and smiled at me, and we just got a really good portrait of that. I've photographed Anthony Bourdain, Andrew Zimmern of Bizarre Foods. I also love Daniel Boulud, another one of these guys that is very easygoing and fun and just enjoys the process of having his photo taken.

Do you ever get to eat the food you shoot?

I actually have to answer that question almost every single time I shoot food. It really depends on who the assignment is for and what you're shooting. When you're shooting for the New York Times and most publications, you're not allowed to take anything. I think, in general, it's just a good idea to focus on your work. When I first started shooting, you got to see a dish and maybe taste it and it was nice, but now this is my profession, and I want to take it seriously and focus on what I'm doing.

Is there a certain publication or type of assignment which is way more fun than anything else, which you get more excited to go do?

I love New York City and the food scene is amazing here, but when you get to travel, you get to discover areas and people that you generally haven't met before. In Tokyo, they have the largest fish market in the world. It's this giant market where literally thousands of people work and it's this bustling, crazy thing, and it was just awesome for photography. I did this documentary-style photojournalism shoot where I just walked around and took pictures of people working and managed to get a couple portraits. There was a lot of action, just these beautiful large stands where people are throwing fish around.

You started doing small work with the Brooklyn Paper and obviously ended up building a good relationship with Eater and all these other outlets—do you have any general tips for freelancers looking to establish relationships with a publication or website?

I think the biggest thing to be successful in any industry and rise to the top is you have to out-hustle everyone else, so you really have to work to continue to improve and show that your photos are better than they were last week. I guess just meeting people—going to events, going to parties, going out to these restaurants. If you're just starting out taking photos, publish them online, even if it's Flickr or Facebook, just so people see what you're doing.

Even on a mass, less-professional scale, you see food photography being a more and more commonplace activity, especially in the social media sphere. What do you think of the Instagram phenomenon?

I've definitely stepped up my Instagram game. When I started out, I was taking photos and little snapshots of my cat, and now, I'm trying to actually compose photos and take it seriously. A lot of people are getting assignments and getting work and notoriety through Instagram. I just got mentioned recently actually by Instagram in a post about food. They mentioned me and another photographer as "food photographers to follow" and I bumped up 3,000 followers just from that. It was amazing. So now I'm at 18,000 followers, which is pretty good, but a year ago, I only had 1,000 or 2,000. I've been trying to take it seriously and be an active part of the community because I think, right now, it's the hottest thing in photography, especially if you're doing this as a profession.

Check out some of Daniel Krieger's food photography at www.nycfoodphotographer.com and on Instagram by following @danielkrieger.