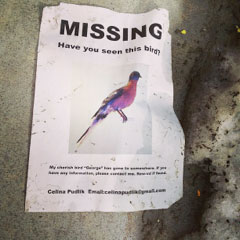 I first learned of "'George's'" disappearance last Tuesday. As I shuttled down the street to class early one February morning, I caught glimpse of a mudstained, soaked sheet of paper lying limp atop a dirty snowbank. Hours of constant contact with the rapidly melted snow had caused the ink to smear, leaving those familiar streaks, sad and reminiscent of tears from mascaraed eyes. Intrigued, I examined it more closely, noting the central image: an Internet stock photo of a mourning dove, perched furtively against a bright salmon backdrop.

MISSING BIRD:
My cherish bird, "George," has gone to
somewhere. If you know of his whereabouts,
please contact me, the owner, at xxx-xxxxxxx.
Reward if found.

Smiling first at the incredibly nondescript picture of "George," then at his description (a "cherish," rather than "cherished," bird), I let my mind chew on things for a little while. I guess you could say that I took a kind of pleasure in his owner's stiltedly worded insistence that the bird was not lost, but rather just out of the office, enjoying whatever freedoms this mysterious "somewhere" had to offer. Staring deep into the vacant stare of the anonymous dove—a gaze that, however nondescript and nonspecific, still seemed to contain hints of confusion and even profound sadness—I found myself growing inquisitive. What had happened to "George" to make him decide to abandon his life as a cherish bird and depart for somewhere, wherever that was? Did he escape? Was he kidnapped? And if this "George" was never found, who, if anyone, would replace him as a cherish individual? Quite excited by the prospect of abandoning my academics temporarily, I lit a cigarette and set off in search of somewhere, and more importantly, "George."

"Now, if I were a cherish bird, where would I go?" I pondered, in between tobacco puffs in the park. There were the obvious locations: Central Park, the grove of trees by the Philosophy building, any one of the hundreds (if not thousands) of pigeon-infested awnings scattered throughout town. Ay, pigeon, therein lay the rub: If I was looking for a lost pigeon, or sparrow, or other common bird, the hiding spots I had just listed may have been valid places to search. But "George" was a cherish bird, and surely, this somewhere, wherever it was, had to be a paradise with enough of an allure to draw such an exemplary creature from what was, I'm sure, a life of luxury. But did such Elysian landscapes even exist in this dirty city?

Phew. I sat down at a weathered park bench and gazed out over the Hudson, feeling overwhelmed and frustrated with myself for making the rash decision to skirt my academic responsibilities for what could be a fruitless search resembling an existentialist wandering more than an actual quest. "By this point," I thought, "'George'—if he exists —is probably off in Somewhere, New Jersey, screwing a grackle and laughing at me for wasting the past hour looking for him. If there's anything that bird does cherish, it's probably the fact that more than one person has made unnecessary physical, monetary, and mental expenditures in his name."

Come to think of it, did "George" ask to be a cherish bird? Did he ask to be treasured, or coddled, or cuddled? Was Somewhere a place that tyrannical, enslaving humans like myself could never hope to find? After all, if "George" cherished his owner like any good cherish bird should, I'm sure he would have asked him/her to come along. "Open the doo-oooooor to my birdcage," he'd whisper in a pillowy, melodic coo. "We're going to go somewhere, to somewhere, somewhere where all our pains will be soo-oo-ooothed." And he'd gingerly extend a downy wing, and the two of them would drift off towards the "somewhere," the "somewhere" we will inevitably find someday, but a place still very much outside our grasp. Or, at least, mine.

I rose, lit another cigarette, and turned to head back (well, at the very least, I got an hour and a half of existentialist pondering in). As I begrudgingly slumped back up the slushy path, I let my eyes wander, glancing around at the bare trees lining the path, their pale, twisted branches poking the sky like bony fingers. Periodically, a cold wind would spill forth from no place in particular, stinging my cheeks and forcing tears out of my eyes. I wasn't watching where I was stepping, so it was only a matter of time before I stepped on something soft and squishy. When the downward momentum of my foot was slowed by some strange, bony armature, I knew right then that I hadn't stepped on a Coke can.

My foot had fallen on the breast of a mourning dove. A cherish bird—or was it the cherish bird?— lay at my feet.

Its scaly, pink feet, sticking up from the tiny downy body in two claw-tipped stalks, resembled fleshier versions of the skeletal winter trees I had gazed at only moments before. The closed eyelids, meanwhile, shimmered iridescent gray: the same shade as the dirty snow that was melting a few inches away, producing just enough ice water to dampen the feathers.

I thought it was asleep, really. Lying on the pavement with its feet up and its wings firmly pushed to its sides, it looked as though it had been flying along to "somewhere," said to itself, "Well, here's a gooo-ooooood spot for a nap!" and conked out on the spot. But then I noticed that its breast wasn't rising and falling with the tidal motions of sleep, that its wings didn't twitch from the flight of its dreams. I also noticed the tiny stream of ants marching towards the tail feathers, a river with the width of a single string, all coursing toward the dove's lower half, cherishing the feathers, engulfing them in a mass that grew by the second.

The cherish bird was not asleep. Just dead. Peaceful and dead.

Ostensibly, when a girl encounters a corpse, she runs away screaming, maybe to notify the authorities to have it removed. And were this the body of a common crow, or a starling, I would undoubtedly have done just that. And there was a chance that the crumpled body before me was just another mourning dove. After all, the photo was pretty nondescript. Still, I couldn't shake the possibility that this was "George," fallen on his journey to somewhere. I thought of the photo again—of the beady black eyes, the blushed bosom, the pointy beak that every so often opened to coo off into the cataclysms. Should I call the mysterious owner? Should I tell them that their cherish bird had found "somewhere" on the side of a dirty path in Riverside Park?

Sartre had a point. The problem of "George's" funeral was nonexistent, and I sure didn't need to go sticking my nose between doorjambs just to get a slam in the face. And so, lighting yet another cigarette, I strode off, looking one last time at the dead bird at the side of the path, napping his way to nothingness. I suppose my mission didn't end up the way I had intended; that is, my wallet didn't get any fatter that day. Exiting the park, I thought I heard the sound of a single coo-ooo, barely distinct against the soundscape of whooshing taxis and chirping sparrows and chattering children. Another "George," singing his song on his sojourn to "somewhere." And I know it sounds hard to believe, but I felt like that was all I needed.

The Eye is now accepting fiction submissions of 900 to 1,200 words. Send your story to eyefiction@columbiaspectator.com.