A Wave that Won't Recede

A Wave that Won't Recede 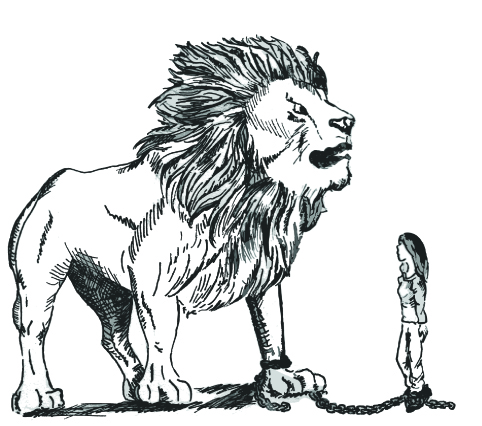 "So you wanna quit," mom said. "You wanna drop out. Move home." I looked down at my hands, picked up my fork, and pushed the Thanksgiving leftovers around my plate. The yellow light encircling the dining table in an otherwise dark house made me feel like I was in an interrogation room.

"Because. Go to class, keep your head down, and do what you need to do to pass." Her tone softened. "And snap out of this phase. Try to be happy."

I cleared our plates. She thanked me, I shuffled into my room. She gathered the mail and retreated to hers.

At the beginning of last semester, I signed up for classes that I was excited about, joined clubs, made commitments to things that I wanted to try, went out with my awesome roommate and met new people. I was ready to make the year count.

But as the semester wore on, I found myself neglecting my commitments, hating my courses, skipping meals, avoiding friends, and sleeping in every spare hour that didn't require me to be in class. When I managed to show up to class, it was only physically. Projects and assignments became weeks overdue, and getting out of bed even to shower required at minimum an hour of talking myself up to it.

Crying episodes came daily either in private or in incoherent, blubbering phone calls to mom and dad ("but dad I r-really s-studied for that test"). I played a game with myself to see how many days I could wear the same sweatshirt to class before it was too tear soaked and snot stained for even my new standards of hygiene. My pastimes included lying in bed staring at the wall or lying in bed imagining what it felt like to fall from a very high place. I concluded I would never be curious enough to find out.

One day, after a particularly bad anxiety episode, I decided it was time to call CPS. The woman I met with was nice enough, prompting me to tell her "why I was here" while she clacked away on a computer, ticking off signs and symptoms from drop down lists, I imagine. She told me about various support groups on campus that all met during hours I couldn't make. She led me in an uncomfortable breathing exercise that worked better on her than me. Yes, I told her, I did feel calmer, it was nice. She told me she would do some research and refer me to "outside help," and at our next appointment we'd make plans to get me feeling better. In the meantime, I should keep doing that breathing exercise.

I arrived at my second appointment. Yes, I had been doing that breathing exercise. It was helpful, I lied. She said she was going to call and find me someone to see. I never heard from her again. Truthfully, I could have called her myself to follow up, but I was too hopeless–too apathetic–to reach out again. I started seeing my adviser on a weekly basis, per her request. I confided to her that I simply didn't care about being here anymore. I hated the system that obliged me to run myself into the ground for a grade point. I hated the system that also expected that I keep myself sane in the process. I hated that I actually needed this system to "succeed." I felt like I wasn't afforded the time to take care of myself physically, mentally, or emotionally while maintaining the academic performance expected of me. I had accepted that I would fail my classes. That I should leave.

We started making plans for my withdrawal, and over Thanksgiving break, I attempted to warm my parents up to the idea. I assured them that lots of people took time off and that I would be going back, definitely, at some point. I had it all planned out: I was going to spend some time in St. Lucia with some of my dad's family, maybe help my aunt out at the hotel she owned, and regroup. If I left Columbia, sought out professional help, maybe I would rediscover why I wanted to be there in the first place and why it was so important to me and everyone else who told me I shouldn't leave.

When I was accepted to Columbia, I vowed to leave my insufferable Texas suburb and never look back. Now, it looked as if I was living up to the norm of where I came from. My acceptance to this school was a fluke, it was only a matter of time before I was back working at the outlet mall with the people I thought I was better than. This was all OK. This was better than struggling for no good reason at a school that was also crushing me with the weight of the ill-fitting privilege it saddled me with on the day I got my CUID. In spite of my shame, I was hopeful for the day when I would be OK again.

"So, are you going back?" mom asked as I took down the ornaments from our Christmas tree.

"I guess so," I shuffled to my room as she gathered the last decorations. She didn't know, but I was far from ambivalent about my return for the spring: I was positive that I wanted to leave Columbia and positive that I couldn't.