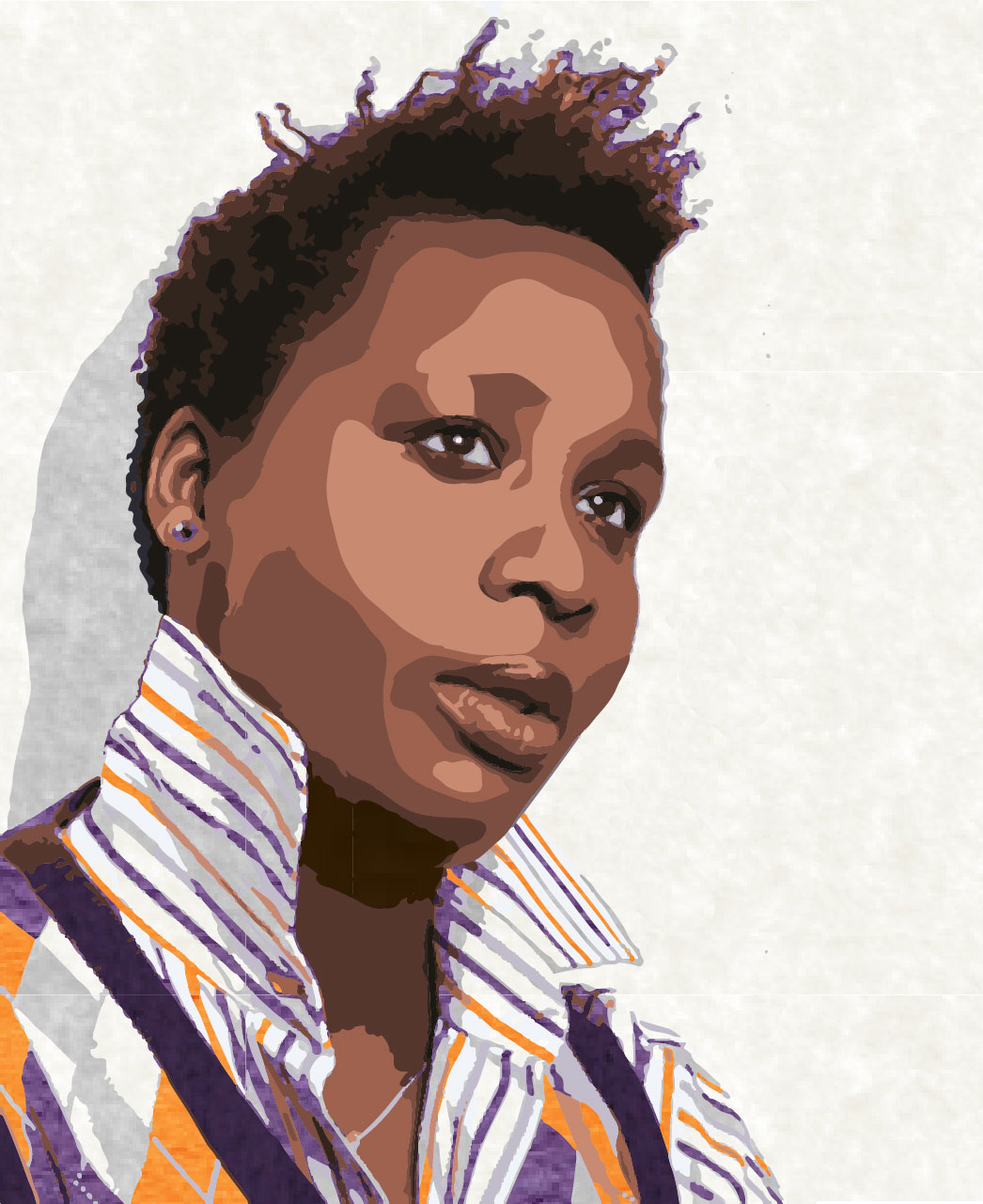 Known for her elaborate, collaged paintings set in funky interior settings, New York-based artist Mickalene Thomas is making history in the art world. Using multiple styles and unorthodox materials such as rhinestones and glitter, Thomas aims to create art that empowers African-American women and explores femininity. This week, former Eye art director Suze Myers got the chance to chat with Thomas about French pointillism, Swarovski crystals, and her creative process.

Your work is created from a multi-step process. Can you describe this process?

I start by building an interior space in my studio, and from there I photograph models in that space who elicit a particular aesthetic. From that point, I consider each photograph and decide which ones I want to turn into collages. After I create a collage, it is scanned and from there I decide—based on the collage's composition—if I want to make that collage into a painting. Further changes can occur once I scan it into the computer because it is at that point when I start manipulating the image in Photoshop, and depending on the scale of the painting, it transforms the image. I can layer it with different color compositions, patterns, and elongate the body here and there – It gives me another layer of manipulation with the image. It's a pretty intensive process.

Building up the installation takes a couple of weeks, and from there I'm deciding on a particular scenario or situation that I'm trying to convey and dressing up the models, which takes another couple of weeks. The photographs and the installation are pretty arduous because the idea comes first, and then it can take anywhere from two weeks to a month before I even begin the painting, because I'm working on a collage and deciding how I want the image to be.

A lot of your work goes behind just the mere idea of painting, and has rhinestones or even Swarovski crystals. How did that material decision come about?

I started using what you would consider "non-traditional" materials while in undergrad, and then it continued on into graduate school. I was interested in the play of craft materials—decorative or outsider art materials, materials that were considered secondary or on the peripheral—and how to bring those to the like of a high art. I was interested in how to integrate that into my discourse, or a larger western canon idea.

I have always experimented with a lot of materials and used collage as a starting point with my work. After playing with glitter and felt, and all of these other materials—I spent a lot of time at Michael's craft store and I serendipitously stumbled onto the rhinestones. What I was attracted to when I first decided to start working with them came out of working through notions of beauty—particularly related to French Impressionism. I was thinking of abstract dot paintings and working through Seurat and aboriginal art. It seemed like the next step, as far as the material, it was the rhinestone. The glitter wasn't giving me the pointillist aspect I wanted in the painting. The rhinestones have that quality naturally that allow me to treat a surface completely (like pointillism) in place of paint.

So that's how it entered my practice: through concepts of pointillism, looking at Seurat, working from that vantage point and still experimenting with craft materials and how to integrate them into a larger conversation. The more I started working with them, the more I realized the different colors they exuded with light and then thought about the notion of "dressing up" and the idea of the mirror. They've taken on new shapes and forms within my paintings and how I use them. I developed an understanding of the material and understood how I wanted to integrate it as a painting element. Now, the way I use them is another element or medium that is just as important as the paint. Whether it's acrylic or oil they play just as important role in my painting as a thick oil paint mark or a translucent watercolor mark.

You mentioned the influence of French Impressionism, and your 2012 show at the Brooklyn Museum was named The Origin of the Universe, after the infamous Gustave Courbet painting. In that way, how does the art historical past interact with your work's exploration of black female beauty and sexuality?

It has to do with the gaze. I'm interested in French painters who were very controversial and who used women (considered to be prostitutes) of a lower class, and placed them in this high-class notion where people would be forced to look and reconcile with a contemporary idea of that time. For me, using black women fits that concept for me. Black women are still today considered second-class citizens, or third, sometimes. It's putting them in the same light to force this validation. It's like, "I'm here, and look at me." A lot of those women who were painted by Manet and Courbet were women that people didn't want to look at. Those sitters were looking at the viewer when at that time no one really looked at the viewer- they weren't supposed to. These women weren't supposed to look in the eye at people of a certain class. That was something that you just didn't do. To have these women do that in these paintings portrays a great sense of power, and that's why I was interested in using them as inspiration for direction. In relationship to black women and beauty, that to me is very similar. The women I'm working with aren't lower class citizens—they're not prostitutes or on the street—but they're considered in the same vein, secondary.

Also in your work are a lot of domestic and interior settings. What's the relationship between the female black body and domestic settings in your work?

For me, these domestic spaces we reside in are within the same notion and idea of defining who we are, in relation to how we navigate through these spaces. The body is in all of those spaces, and signifies and identifies who we are and how we live, and tells a story about us. It's a narrative about the body being present. We spend so much time within our own personal interiors. You can tell a lot about a person by how they live, or the things they put in their home. It's also a history of different cultures of what they have in their home. To me, that's a different notion of beauty, of how we live.

I read somewhere that you use your mother as a model for some of your paintings. How did that relationship of mother and daughter influenced those specific works?

I've used her in my work since graduate school. She was actually a main inspiration, because I'm pulling from her life and pulling from who she was, and looking at why I have this need to define and understand my own beauty through my mother. We look at our mothers to guide us and tell us how we are supposed to reside in the world. It was natural to pull from who my mother was. I was very interested in finding her world, and why she resided in her space the way she did. She was a model, and she was interested in a different type of beauty—more commercial. I was trying to contend with those ideas, with that particular construct and how we confine to those notions of beauty and defining who we are in the world. It seemed fitting to start with her. She was the one I could go to and say, "Hey, can I work with you on this?" It was easier to work with her and not some stranger. It was a natural progression in my work.

You made a film about her, too, a documentary portrait. What was that transition like, from collage and painting to film?

A struggle. It was one of the first times when, as an artist, I worked with different types of people and different creators, people who come from a different technical background with their own expertise. As an artist, I had to allow myself to relinquish a lot of control over some of the ideas I had of what I wanted and what was possible. It was important to allow others into the scope of my ideas, to brainstorm and say, "This I what I'd like to do. I need you to help me do it." That was a first. Usually I'm in my studio, and I am the director. I'm the one who is saying—whether I have assistants or not—that this is what I want, this is what you need to do.

It was great. I'm hoping to do more films. The medium is very fitting with my work, in the sense of collages; the editing process is along the same lines of cut and paste, of splicing of images, and bringing them together to create a composition. You can shoot as much footage as you want, but in end, it's how you put the layers together to tell the story and to draw the viewer in with the timing and space and sequence of images. Film editors are just as important as cinematographers. You have to have a good editor you want to work with, because they need to understand the story and the vision to help guide that decision.

What advice would you give to an aspiring artist?

My advice would be to just continue making work and don't think about the market. Don't think about what your art market is. Just make the work and build your own network and support system of friends.

You can see Mickalene Thomas' work displayed at the Studio Museum in Harlem, the Museum of Modern Art, and the Brooklyn Museum.