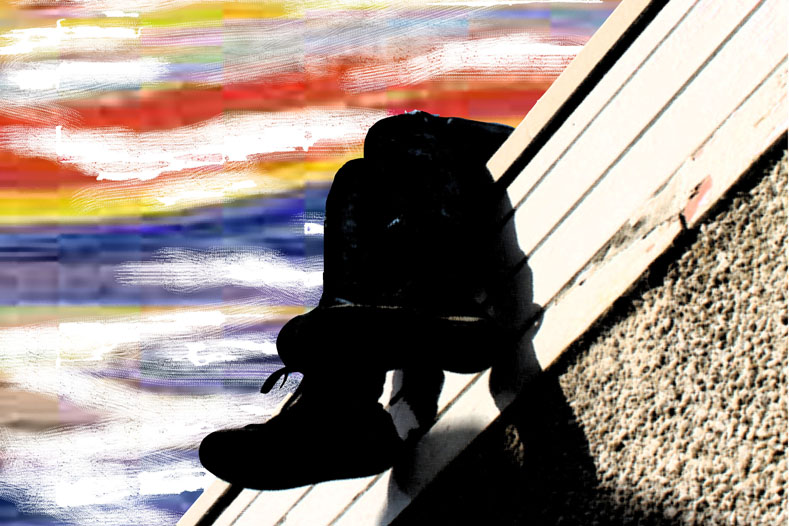 The rain pauses for a fugitive moment, my body suspended between raindrops like a helium balloon, bursting with trapped energy. "I know where we're going," Casey hollers. We glide into the parking lot just as the word "FULL" blinks yellow on the sign outside.

Once we're there, Casey stops, leans against the building, lighting up. Max, his sidekick, waits for instructions. On Casey's signal, he yanks the emergency-evacuation ladder. It jackknifes down with a metallic thump and jangle.

Casey turns to me, the glint in his eyes a taunt, a dare.

"You don't have to come up if you're scared."

Scared? I'm here to grab the brass ring, to escape my status as the sheltered girl whose grand act of defiance consists of dying her hair from Hot Tamale red to black cherry. With that, I follow Casey's green Chucks up the first flight of stairs.

On the ninth floor, my stomach starts to churn. I gather my courage and glance around. Teenage couples stare back at me from the American Eagle billboard. I feel silly, the little girl who hangs at the fringes of the grown-ups' party wearing a pink, synthetic cape. I march on autopilot—one foot, the other—peering down every so often to watch people transform into insignificant specks. What will my parents think if they get a middle-of-the-night phone call from the Santa Monica police? They fear the day that their little girl makes the same mistakes they did, the nights they snuck out of the house to see Jimi Hendrix and Janis Joplin at the Fillmore East.

Casey walks along a precarious ramp and out of sight. I trail behind him.

I want to throw up, breathing heavily. Am I a normal teenager yet? Or do I have to make it all the way to the top?

The whoop of a stray siren and honk of an errant car horn dissolve into the white noise of wind and waves. The metal handrail, sharp and cold, indents my skin, chilling down to the bone as I cling and grip.

From the rooftop of the second tallest building in Santa Monica, I gaze out at our sprawling, fog-covered burg. Los Angeles appears half-baked from this height, a lame pretense of a city. Buildings, dwarfed by the legend of New York skyscrapers, with every light extinguished and windows dark by 8 o'clock. The heartbeats of neighborhoods, loosely connected by arterial freeways that run parallel, but rarely meet. City planners like artists who died before they could finish their masterpiece. Hard to notice when the city envelops you. But from up here, from the point of view of planes and birds, it ain't hardly the land of milk and honey.

Casey's father came here to represent a glam-rock band in the '70s, got wrapped up in it all and never left.  Casey's mother left him, five years after he was born. Casey was raised with the help of a few bottle-blonde trophy wives drifting in and out of their Malibu beach house. Despite his countless tattoos and bad decisions, Casey is a lot like me, just better at hiding it behind his grunge-perfect hair.

Casey sits on the balustrade, feet dangling. "Great place to end it all," he snickers.

He has thought about it, weighed the pros and cons of suicide when his father had left town for more than "a night or two" and he found a stash under the kitchen sink. Casey lights another cigarette as I join him, hanging over the edge. I imagine the cold, hard splat of a body meeting pavement. Instant crush of looky-loos and bystanders with cell phones, hoping to make a killing. A crowd gathers, but I—now dead—have faded into something small, dark, and inconsequential, a dot in the center of frantic and ravenous activity.

Casey waves a regal arm, as if he owns everything our eyes can see. A circle of lights winks along the deckled black edge of the Santa Monica Bay. High-end real estate brokers refer to that string of lights as the Queen's Necklace in all the glossy and alluring brochures. I can see why now: a royal collar of yellow diamonds, embers strewn along the coastline, growing dimmer and dimmer until they extinguish in the hills of Point Dume.

"That's where I live," Casey announces. "In the middle of that black hole." The three of us stare out at the dark colony of shapes near the water.

I shake my head.

Casey snuffs out his cigarette with the tip of his Chuck and lifts his black Cramps T-shirt to show me the skin of his white chest. Emblazoned in multicolored glory, wings spread from nipple to nipple; an eagle holds a dangling emerald snake in its talons.

Said by anyone else and I would have laughed out loud. Truly an honor to be climbing up their fire escape and trusted enough to keep it on the "DL." But to become one of them, I would have to undergo a few changes.

I make a mental note to come back here if I ever feel like committing suicide. But—for now—I back away into bustle and awkwardness, a teenaged girl who climbed too high and now must make her way back down to earth.

Three months later, Casey and I sit at a coffee shop late into the night. Unable to meet my gaze, he confesses that, at lunch, his dad mentioned his biological mother.

"He called her a cunt," Casey mumbles as he turns the sugar packet over in his fingers. "I went into the bathroom and cried, trying and failing to reach her." He stares blankly at the point directly above my head, then at me. "So, tell me about your shitty life."

I tell him stories, carefully editing out the happy moments that might make him envious. I see his future spread out in front of him. Casey has cried 27 times in the past year, and still he is nothing but trouble. He shoots me a transparent half-smile, one that means to say, "Don't worry, I'll be okay," but I'm not fooled, not even for a second.

Now, sitting here in Butler Library, I scroll through my Instagram feed and spot a picture of Casey. Trying to make it as an actor in LA. Classic. But how am I any different? I'm not, really. In this economy, there is no guarantee that either of us will get hired. I am just as clueless as he is. Since I got to Barnard, the only thing I've been sure about is the fact that I am unsure about absolutely everything. Half of me wants to drop out and move to Brooklyn, and the other half wishes that I were back on top the second tallest building in Santa Monica.

I can't stop thinking of the night at the coffee shop. I haven't seen Casey since. But that doesn't matter. He's right—we'll be okay. We are two privileged white kids from West Los Angeles, and our parents will support us through any major life crisis we may have. But it never hurts to reach out. I scroll through my contacts and find his name. I type, "Hey. How are you these days?" and hit send. Within a few seconds, the little gray bubble pops up, and he types his reply.