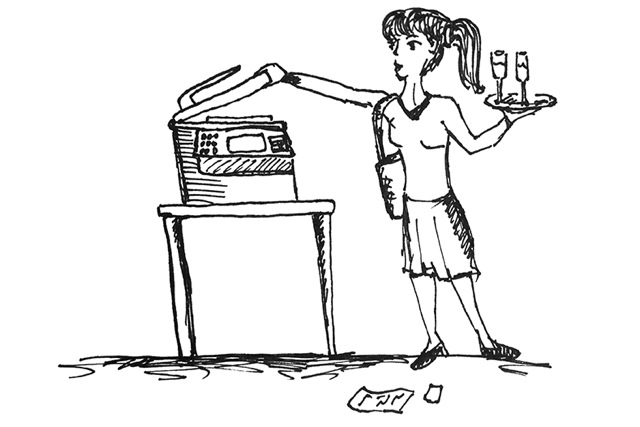 Once I had gotten into college, it didn't feel like that was enough. Maybe it was, for a few months, but midway through summer and with NSOP getting closer, 24 hours at a time, I began to worry about internships. I would hear that so-and-so already had an internship here and that so-and-so had an internship over there, and there I was with no internships in mind. I was registered for 12 credits—which I felt wasn't enough—and had no idea what I wanted to do. I hadn't attended my first class yet, but I already began looking for an internship; I didn't want to fall behind or feel like I wasn't doing anything. I had already become obsessed with the idea of building my résumé.

I found the gallery internship through Columbia's art department website. As an aspiring photographer, I thought it would make sense to apply for an internship at an art gallery. The description stated that I would leave the internship with unmatched experience in the notorious New York art scene. This sounded incredible—a chance to get a taste of what I wanted in one of the world's most competitive art scenes. I would get a chance to meet photographers that the gallery represented and grow as an artist myself.

Over the summer I emailed the director of the gallery, and after several weeks and a lot of email checking on my part, I set the interview up for 9 a.m. on a Friday morning, ignoring orientation and my need for sleep during what turned out to be a very emotionally charged week. A couple of days later, the director's assistant emailed me congratulating me on getting the internship. I really believed I was one step closer to becoming the photographer I had dreamed of becoming, the one who'd sell prints in the Chelsea gallery from travels to different countries while greeting friends at my own show. The thought of already having a foot in the door was exhilarating.

But I had no idea what I had gotten myself into. It was pouring rain on my first day of work; that must've been the initial red flag. I walked into the gallery, and to my surprise, I was greeted by no one. I got a two-second hello from the gallery owner and was immediately sent to the back room to serve champagne and wine to guests who argued about how much they spent over random works of art. I was asked detailed questions about the artist whose work was on display, and when unable to answer, I was scoffed at. "What, so you work here? Really? How old are you?" The tone made me feel that I belonged anywhere but there. At one point, the assistant handed me paper towels and told me to clean up somebody's mess on the floor. I spent the rest of my night washing dirty cups at the end of the hallway. I told myself it was okay, it was just the first day, and all first days suck.

But it wasn't just the first day that didn't go well. My job was strictly office work and busywork. I edited captions, arranged the gallery's new website, made countless photocopies, printed pages for their collection of binders, and handwrote thank-you notes. I felt like I did nothing of importance; I felt like they were giving me work just to fill the time. Occasionally, I picked up lunch for the staff or bought supplies at the nearby Duane Reade. At one point, I even picked up medication for the owner's dog—and I really dislike dogs. My world there was limited to the boundaries of that office. There, the hours passed slowly, and when I got back to campus late in the evening, I was too exhausted to do anything else.

I would get up early on Friday and Saturday mornings, before Hewitt opened for breakfast, and I would come back when it was already closed for the night. I was spending money I didn't have. (Meals in that area several times a week were expensive.) I was missing two full days of the week and trying to get adjusted to college in the city. In addition to all weekend long, I'd sometimes also be gone on Thursday afternoons for openings or events.

I had attended a boarding school in a small New England town where I lived with my best friends, and the change of pace was something I needed time to understand. My friends were going out and having fun while I was stuck in an office I despised, doing work far from what I had imagined, far from what I loved to do. They explored the city's neighborhoods, and didn't set alarms for Fridays or Saturdays, but most importantly, they enjoyed the bliss that was freshman fall, the 15 weeks that gave them the luxury of time, exploration, and mistakes.

Because the internship was unpaid, I felt it was fine for me to let the staff know the days that I couldn't make it, and this included the day after Thanksgiving and another day for a required school event. This was all approved, but what wasn't approved was my third absence, one that I could only let them know about a week prior. I was fired immediately in reply to my email. The response came not long after I hit "send," in two sentences, short but the farthest thing from sweet. I was called immature for requesting another day off and told that this would serve as a valuable life lesson for the future. And my boss spelled my name wrong.

I was shocked. I received the email while having dinner among friends. I lost my appetite and headed straight to my room and cried for the first time that semester. Did I really just get fired? From an internship? What was I going to tell my friends when they asked about the job? I felt that I had failed to meet expectations, that I wasn't good enough. The two and a half months that I spent at that gallery, doing work I disliked, would never amount to anything. It wasn't going on my résumé, and a recommendation? Forget it.

I went home for break and thought a lot about what had happened that semester. The director was right, though. Her email did serve as a valuable life lesson, but maybe not in the way she wanted. I decided to hold back on the spring internship search. I signed up for classes that I felt I would love, and only looked for summer internships that I thought would interest me. I sat down and re-evaluated what I loved to do—writing, photography, research—and decided to pursue those things only, leaving behind the idea of fulfilling something because of outside pressure. I would no longer ignore the most essential part of myself.