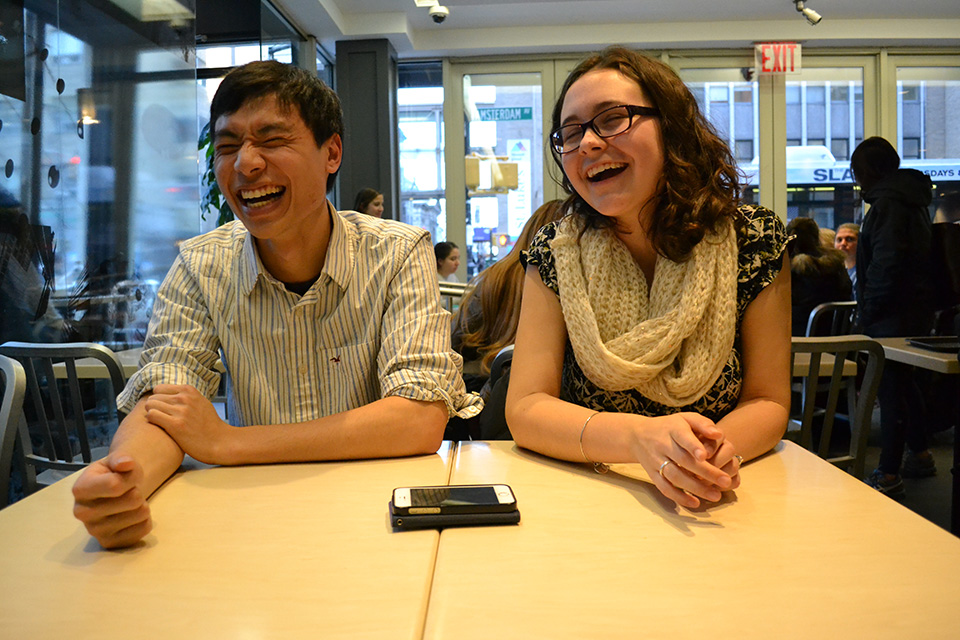 Columbia College seniors James Lin and Tatianna Kufferath will marry in October of this year.

Before Columbia College senior James Lin proposed to his girlfriend and fellow senior Tatianna "Tanni" Kufferath on Oct. 5, 2014, he sent her a text message. "There's a place in Riverside Park at 88th Street where the path curves, and when you come around the curve, you'll find me waiting."

Tanni immediately recognized the reference to her favorite film, You've Got Mail. When she arrived at Riverside Park, James emerged from the curve of the path with flowers. After reading a poem he had written, he bent down on one knee.

Tanni and James met when they were first-years working to co-found a Christian fellowship that would become Columbia Faith and Action. They both considered their Christian faith as a cornerstone of their values. "Our faith is a foundation as to ... how we should live and interact with other people," Tanni says. "Having those shared values brought us a lot closer."

The connection between the two is palpable. As he speaks about their shared life philosophy, Tanni touches the crook of James's elbow, and they stare at each other with raised eyebrows before breaking into laughter.

Although James has always considered himself an emotive person, he discovered an even deeper capacity for spiritual connection through his relationship with Tanni.

"For both of us, we wanted to put God first in our life. But in how intensely I can relate to her, how much more can I relate to God and to my family and friends?" he says. "It gave new perspective and new light on all my relationships."

Although Tanni was surprised by the proposal in Riverside Park, she and James had begun talking about the possibility of marriage as early as November 2013.

"It's important for us to say 'Hey, I want to seriously consider this person if we're going to be dating,'" James says. "Then comes a gradual realization that it [marriage] would be awesome." 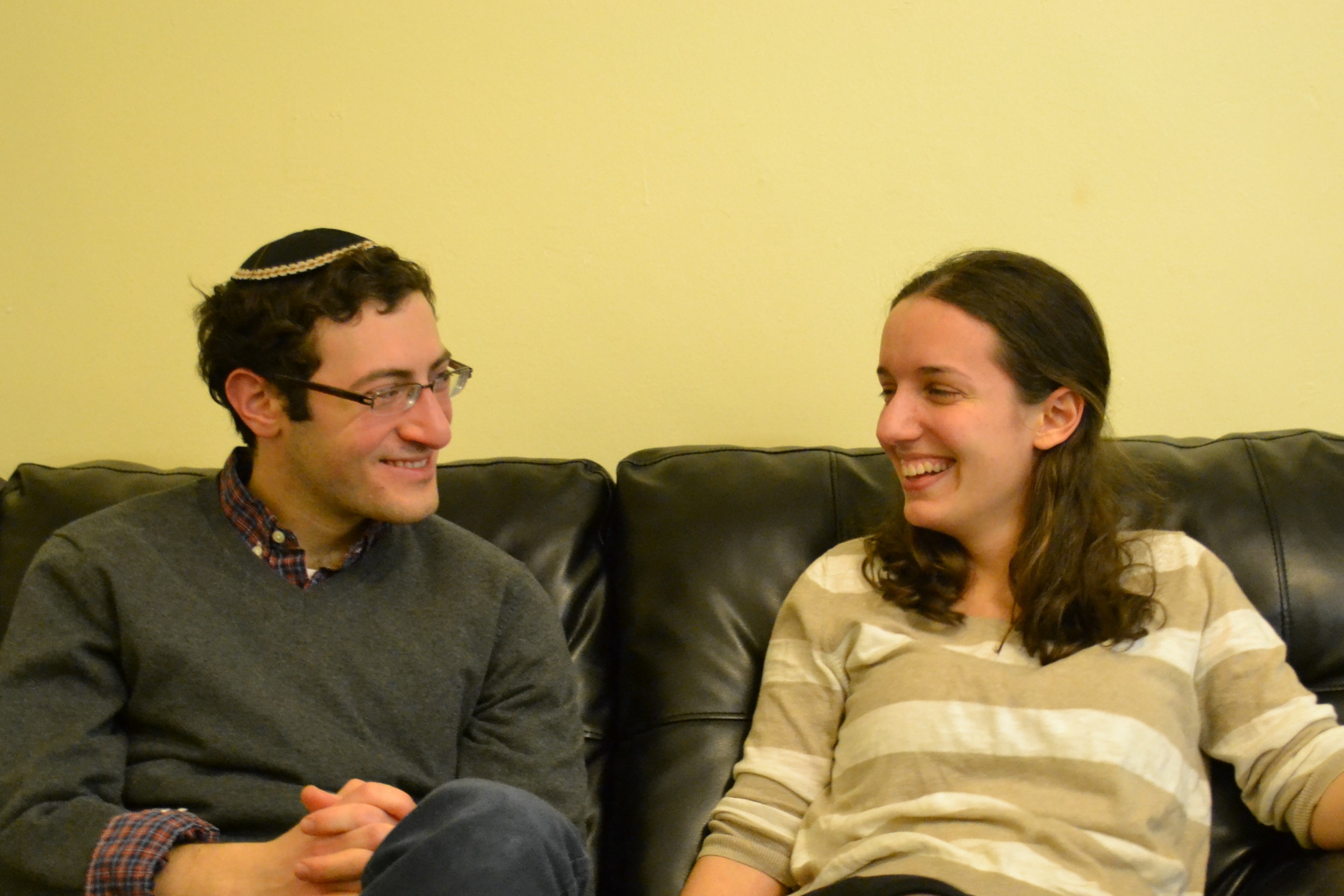 For Columbia College senior Rachel Friedman and her fiancé Aminadav Grossman, who graduated from Columbia College last year, their relationship was similarly shaped by their shared faith. Both Orthodox Jews, the pair met before college at a Jewish summer camp, after which they both spent time in Israel before meeting again at Columbia Hillel.

"When we started dating, it wasn't like, 'Okay, we're going to get married,'" Rachel says. "But it was also on our minds that it wasn't an option to casually date for fun for ten years. That's not the world we grew up in."

Conversations about marriage also came about gradually for Aminadav and Rachel. "It's a question of how you talk about your future," Rachel says. When she speaks, Aminadav tilts his head towards her, listening intently. "Do I say 'I?' Do I say 'we?' But as we talked more, there was a strong possibility that our future could be together, so the conversation came about naturally," she says.

Like Tanni, Rachel eventually knew that she would be getting married, but the proposal also came as a surprise. Aminadav planned to propose in John F. Kennedy International Airport on Jan. 19, before the start of Columbia's spring 2015 semester. "We were planning to live in Israel, so the closest place to Israel was JFK," he says. "My brother was also going to Israel for a semester abroad, and so I told her the whole family was going to see him off."

In order to catch Rachel off-guard, Aminadav led her to believe that the proposal would take place the evening before. "I even took her to the place where we first took a photo at Lincoln Center," Aminadav explains.

"And he stopped and started saying things," Rachel jumped in. "It was a fake-out."

"Then we listened to jazz, and she said, 'Oh, you're going to get on the stage and propose?' And I said, 'Sorry, it's not going to happen tonight,'" he says, smiling.

The following day at the airport, Aminadav led Rachel towards the synagogue inside the terminal. There, he surprised her with flowers, a poster, and a wedding ring. "Then the waterworks began," Rachel says.

Campus reaction to both couples' respective engagements have been positive. Students in one of Rachel's classes greeted her with cheers of "Mazel Tov!" Similarly, Kufferath and James's engagement was met with congratulations. "I was expecting more people to say 'You're crazy,' but was actually surprised by how excited and supportive people have been," Kufferath says.

While Tanni's parents were enthusiastic about her engagement with James, they initially disagreed with the timing of the marriage. "My parents wanted me to get married after I finished graduate school," she says. "The primary concern for them was that they didn't want me to stop pursuing my goals. I am committed to my goals and my career. We [James and I] both see marriage as a foundation for achieving our goals and to everything in life. Once I explained that to them [my parents], they were very supportive and trusted me to make the decision that was best for me."

Columbia College senior Jocelyn Bohn, a friend of James and Tanni's, sees the upcoming marriage of her peers as important milestones. "It is so rare to find serious, mature, and thriving relationships on colleges campuses, let alone Columbia." she says. "But it is also a little scary to think that we are at the age where we can get married—I am a second-semester senior about to go out into the real world, and that in itself is terrifying. Adding marriage to the mix is just so much growing up at one time."

When discussing the differences between marriage and a committed relationship, James and Tanni touch on the issue of cohabitation. "There's a tendency now for couples to cohabitate and live together before things get more serious, and that's something we've not done and don't plan on doing until we get married," James says.

Rachel and Aminadav share similarly traditional values. Before moving to Israel in the fall, they are planning a Jewish wedding ceremony for June in Rachel's hometown, Teaneck, New Jersey. Currently pursuing rabbinical studies at Yeshiva University in New York, Aminadav intends to continue his studies in Israel. Rachel plans to pursue graduate studies there. They plan to raise a family and look forward to hiking across Israel in segments, a trail that would cumulatively take two months to complete.

As Rachel and Aminadav prepare to travel again to the airport in the near future, Tanni and James are also looking to the future. They plan to marry in October at Tanni's hometown church in Santa Maria, California before settling in New York City. James will work in a tech company, and Tanni will pursue graduate studies in psychology. "It's important to have space for each other to grow and to fulfill our individual growth and aspirations, while also being united in one purpose," Tanni says.

With the assurance of commitment, Tanni and James hope that the anchor of their marriage will extend to hospitality towards their friends. They hope to maintain close ties with their friends after marriage. "A lot of single friends of married people are often reduced to babysitters, and we really don't want that to be the case," James says. "We hope to have an apartment that's large enough to invite people over and have a home where people feel warmth and love."

A previous version of this article stated that Aminadav Grossman and Rachel Friedman became engaged before the spring 2014 semester. In fact, it was the spring 2015 semester. The Eye regrets the error.