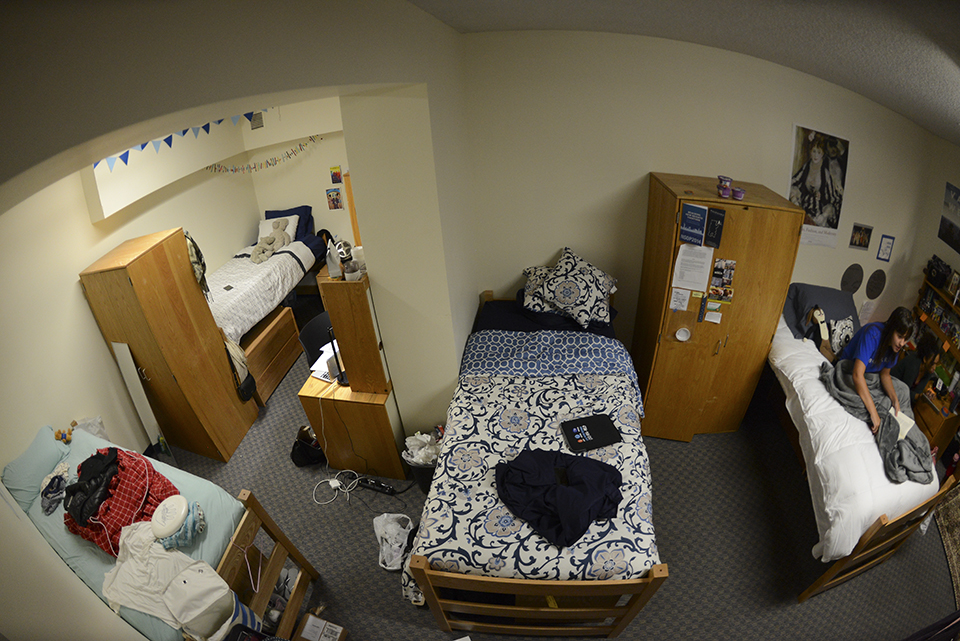 For some roommates, dorm living either bonds them for life or tears them asunder.

Life is uncertain within the Ivy gates of Columbia University. Behind the pristine façade of undergraduate dorms, walls peel, water pipes corrode, and sewage fumes fill the room.

For Xin "Coco" Weng, a Columbia College sophomore, her ceiling threatened to collapse over her head. "Everything is falling apart," she says.

The bathroom ceiling in Weng's first-year residence in Hartley Hall cracked and collapsed onto the toilet seat in the fall of 2013. When moving into Wien Hall during her sophomore year, Weng's walls rained plaster as she was putting up posters. Over time, she has become accustomed to housing issues.

"I try to stay on the positive side, except for when I get yellow water in my sink," she says, with a small laugh. "That's not very pleasant."

Like Weng, Columbia College first-year John Hui has faced both caving ceilings and drainage issues in his Hartley Hall restroom, but he doesn't blame the problems on Facilities. "We give them a lot less respect than they deserve," he says. "We don't take their [Columbia Housing's] perfect execution of their responsibilities for granted."

When it comes to the mouse in their suite, however, Hui and his suitemates are left to their own devices. "They [Hartley Hospitality] helped us set up spring traps. We put it where the mouse frequents the most. It avoids them. It's either the case that they've been used or that they're really badly designed," he says. "The point is, whatever Hartley is trying to help us with, isn't really helping, so we're going to take matter into our own hands and get our own mousetraps."

Although his housing is less than ideal, Hui believes that working around problems has brought him and his suitemates closer. "We work together to get around these things," he says. Hui even expresses sympathy for the mouse. "It's like a bad roommate; you want to avoid him," he says.

Others say housing anxieties are caused by human roommates. For John Paul Mester, a SEAS sophomore, mismatched sleeping patterns and the lack of a roommate bond placed a strain on his daily life. "During September, I got this sickening feeling whenever I walked into the room," he said in a Facebook message. "Where you live, it's like a second home, and the person(s) there is like a second family. To come into that space and ignore and be ignored by the person living there was pretty disheartening."

Mester eventually found a new roommate. "I felt like a liberal escaping Texas," he says. "It was such a relief to find a good roommate."

For Adriana DiFazio, a Barnard College senior, suitemates shape both the living experience and the living space. "Our suite is the way it is now because we all deeply care about the space we live in, and we all really understand how our environment impacts the way we feel," she says. "That only really happens when you live with other people who have the same mentality."

DiFazio lives in a four-person suite in Barnard dorm 620. A vintage bike is parked at the end of a narrow hallway, leading to a spacious kitchen whose walls are covered with black-and-white prints. DiFazio's suitemate, Dana Snyder, a Barnard senior, adds, "I also think that, as much as we wanted it to be this way, it also helps that, even without all decorations, the space itself is beautiful."

Sarah Levine, also a Barnard senior, describes the suite she shares with DiFazio and Snyder as a far cry from her quad in Brooks Hall during her first year. "Having so little space, the tactic was to spend as little time there as possible," she says.

Some students feel compelled to spend time in their dorms, due to their distance from campus. Columbia College sophomore Cherry Zhang was placed in Carlton Arms, on Riverside Drive between 108th and 109th streets after transferring to Columbia last fall. "I would go back to my room after dinner, because it gets so cold at night. It can also get scary if I have to walk alone in the dark," Zhang says. "Before, I was more of an outdoor person. I would rarely spend that much time in the dorm."

"It's harder to hang out with friends who stay closer to campus, and we're just really far away," says Zhang's roommate, School of Engineering and Applied Sciences sophomore Lina Huang.

"I thought it was pretty bad to put transfer students there," Zhang says. "I thought they would try to integrate us more with the current students."

By contrast, some residents living in transfer student housing on 115th Street find their living space ideal. "We're really close to campus, which is really nice," Columbia College sophomore Jamie Chang says, as she sits with her fellow sophomores and suitemates Rochelle Wilbun and Molly Jane "MJ" Engel, who is also a Spectator alumni affairs associate. The trio's residence formerly belonged to Zeta Beta Tau, a fraternity that has been suspended in 2013. Their cavernous ground-floor suite was converted from a common area.

"Since it [the suite] is very big, we have many guests. It helps us be more social," Wilbun says. "We're trying to figure out a way to stay here. Our expectations in the future are going to be so high."

Residents develop a distinct solidarity even when living spaces are less than ideal. "It was an in-the-trench-together vibe," he says. Since November, fumes from exposed sewage pipes have infiltrated Ho's room, which is located across an extant laundry room. Ho has also encountered cockroaches.

"Everyone's like 'well yeah, it sucks, but we're in it together,'" he says. "That being said, I have friends in Schapiro who love making fun of how crappy McBain is. They got super lucky with their air-conditioning and clean bathrooms."

While waiting for a work order request for a broken shower light, Hartley resident and Columbia College sophomore Raymond Li discovered the joys of showering in the dark. "It tunes out your visual senses so you just focus on the water. It's really really relaxing," he says of his new habit. "Other people in my suite started showering in the dark too. I guess we all found that it was a very good experience, so we just continued that. We set off a trend."

For Hui, dealing with housing difficulties has become an integral part of the communal experience. "I'm not saying that Housing should release mice. That's a horrible idea. But at the same time, I don't know, it's something to laugh about," he says ruefully. "If there were no housing problems, there would be no stories to tell."