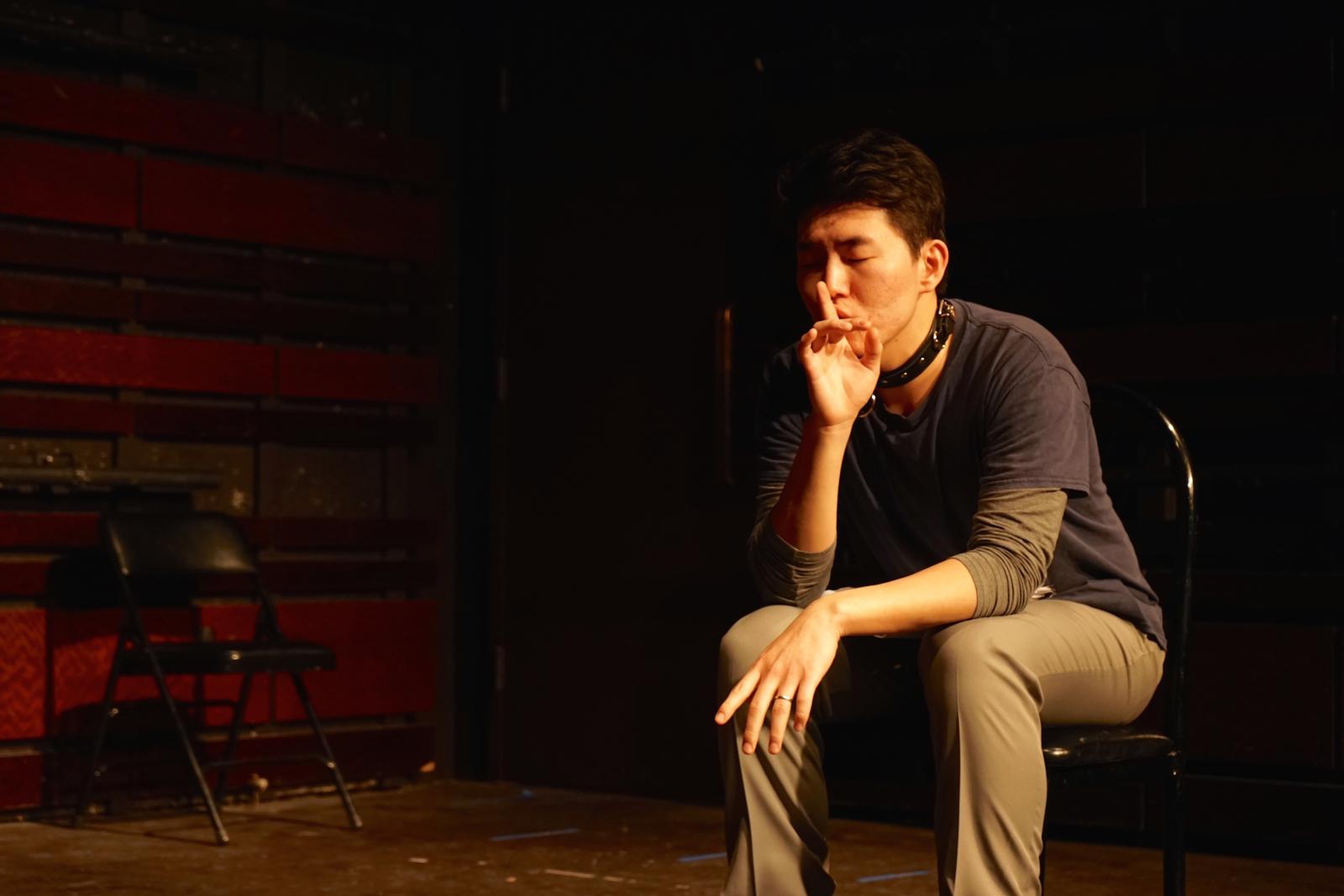 Vincent Zheng, a first-year graduate student in SEAS, plays the male lead in The Insane Asylum Next to Heaven.

In her first acting role in the United States, Lexi Wang, a Columbia College first-year, was a blue M&M. Alongside a red M&M and a cotton candy ball, she played the chorus of Eurydice at the Northfield Mount Hermon School. "I was wearing the M&M costume, standing on stage for two hours," she says with a laugh. "I didn't mind, though. That was the role I could get."

Having grown up in Shanghai, Wang encountered the language barrier in her first theater productions. "In theater, a new language means a whole different world. When I mention a [Chinese] word, there is memory behind it, there's experience behind it." she says. "But, in English, that will sound like a new word I learned. I decided that if I wanted to be part of the theater crew, I needed to do backstage work."

After coming to Columbia, Wang co-founded the Columbia Blue Glaze Theatre, a student theater group that seeks to promote Chinese culture on campus through performance. Blue Glaze will put on its first performance in Mandarin from March 12 to 14. "Chinese theater is special, because it also has my identity in it," Wang says, as the show's co-producer. "Language is such a powerful tool. The culture behind the scenes, for me, is the way to lure myself and others out of their comfort zones."

Blue Glaze co-founder Tian Liang, a School of Engineering and Applied Science junior, sees theater as a way to share her culture. "Blue glaze is a type of china produced in the Song dynasty that's very valuable," she says. "We want to implicitly tell the audience that we are like blue glaze. We have something cultural [that is] implicitly in here, something valuable, vulnerable, traditional."

The group explores vulnerability and isolation in their first production, The Insane Asylum Next to Heaven. Written by Shanghai playwright Nick Rongjun Yu, the play centers around a girl driven to insanity by the Chinese school system.

Many Blue Glaze actors find solace in their characters, identifying with their struggles to communicate and find community. Actor Vincent Zheng, a first-year SEAS graduate student playing the male lead, describes the universality of his character's feelings of isolation, stating, "He has this solitude and loneliness in his deeper mind … He does have a need to communicate and to be listened to, but he didn't get it."

Danning Ma, a recent graduate in the School of the Arts, felt similarly isolated, as she was often in the minority when she studied theater at Barnard as an exchange student. "A lot of times, I feel like I'm the only Asian … and the only foreigner there," she says.

Ma considers the language barrier an obstacle in her desire to communicate. "I just want to perfect my ideas before I say it, you know?" she says. "It takes time, and before I actually say it, other people have already come up with other ideas. And the topic of conversation has already shifted. Anything literature-related is difficult because of the language barrier."

Luying Zhou, a Barnard senior, shares a similar frustration, even as the language barrier has eased. As the only international student in her New York theater class, she was confronted by a classmate for her silence during class discussion. "It has become less about a language barrier than a different frame of thinking," she says. "I like to go through all my ideas and formulate all my sentences before I speak out. I just can't be that spontaneous. I don't think it's a Chinese thing, it's also personal."

Nevertheless, she developed a deeper level of self-awareness through her studies. "I think the classes I took had an impact on me," she says. "They make me more aware of myself, my potential, and my weaknesses," Zhou says.

Millennials in China are also developing a taste for theater, according to Angela Sun, a BC junior. "In China, most people who watch the theater shows are teens and young adults," she says. "They are the new generation that gets involved in theater culture."

Ma sees theater as a transformative force in China, where she attended university before coming to Barnard as an exchange student. "I think theater in China is actually changing students from the practical, pragmatic education they receive," Ma says. "Theater represents this land of idealism for them."

However, Sun characterizes theater in China as fairly exclusionary. While there are amateur theater groups in Chinese universities, she notes that limited resources and funding restrict the professionalism of their productions. "Only theater people already in professional roles know how to access the spaces, the relationships, the cast and directors," she says. "Since we have a lot of theater groups here at Columbia, it is a more open environment than what we are able to have in China."

As one of the co-founders of Blue Glaze, Sun seeks to give Chinese students a way to become involved in theater at Columbia. "There's limited diversity within the theater group on campus," Sun says. "That's why I really want to do Blue Glaze, so that we can give more opportunities to those who cannot get involved in classic theater groups on campus."

For Zhou, Chinese theater is a source of empowerment. "Historically and economically, Chinese people think of ourselves as backwards," she says. "We tend to look up to them [the West] and look down on our own people. That's something that needs to change within China. There needs to be an awareness of the importance of our own culture."

Christina Tang, a Columbia College junior, sees diversity as a growing concern in student theater at Columbia. Tang designs sets for Columbia Musical Theatre Society, King's Crown Shakespeare Troupe and Columbia University Players. "Student theater is not as diverse as it likes to think it is," she says, "It doesn't intentionally divide along racial lines, but you come to these realizations that you don't, 100 percent of the time, fit the image of what's being shown."

"It [theater] was never catered to me as a Chinese American. I didn't expect it to, and I didn't think that it should," Tang says. "But it's good that people are recognizing that there's a difference in experience for people who have backgrounds like that and are interested in exploring them.

To Wang, Asians are infrequently cast in major roles, because they do not correspond to the production's artistic vision. "I respect that in the classical world of Shakespeare, you don't necessarily want someone to play that specific role. That's probably not [intentionally] racist or anything," she says.

"As a director [for other pieces], I imagine my cast to have certain characteristics, which are specific to their roles," Wang says. "Race and ethnicity are not things that determine it completely but are a part of it. Theater is like life, and real life works like that, too."

Although The Insane Asylum Next to Heaven will be performed in Mandarin, the actors hope that the play will resonate with many Columbia students, especially in the characters' experiences with stress and isolation. The theater group also plans to perform English or bilingual plays written by Asians or Asian-American playwrights, pending royalty permissions.

Wang seeks to address the issue of diversity beyond showcasing Chinese culture in theater. "What we are trying to do is really think about the word 'diversity.' When we say that, we don't just mean that we are bringing a Chinese element into the theater," she says. "It is not enough just to accept that diversity exists. We want to celebrate it together. We love to invite others who are not necessarily from this cultural background to come and see, and to feel that they can like it, too."