A Professor of Nightlife

A Professor of Nightlife 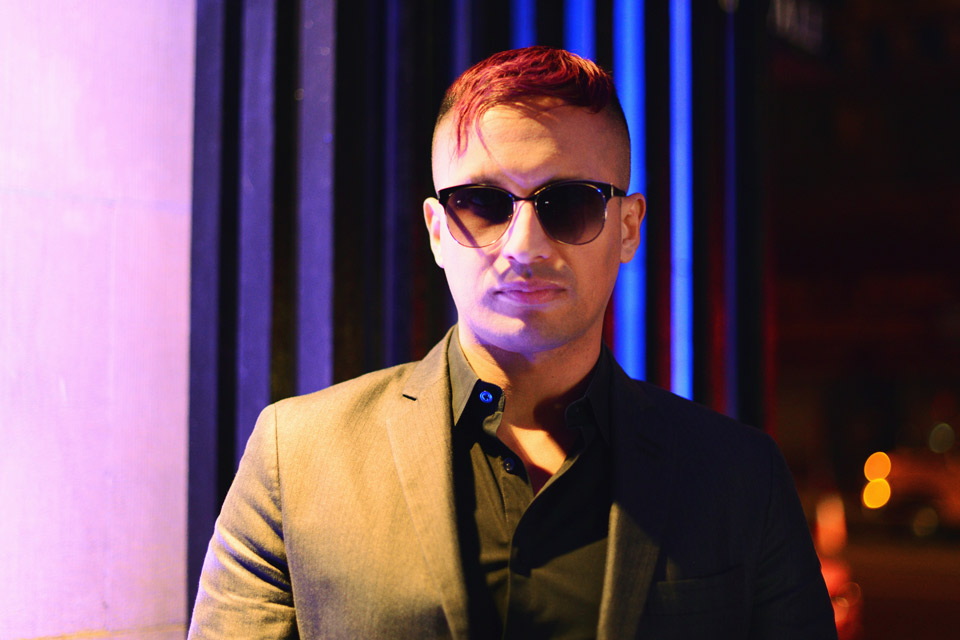 Scatters of sleepy-eyed students trickled into their 10:10 a.m. Culture in America lecture last Thursday, armed with both coffee and curiosity. Waiting to greet them were three esteemed voices from Victor Corona's preferred area of study: a jazz trumpeter, the co-founder of a top nightclub, and a transgender model, performer, and stylist.

A sociologist of nightlife, Corona examines the inner workings of nightclub culture in New York City through both ethnography and interviews with figures like the three who filled seats on this in-class panel, titled Repertoires and Rhythms: A Panel at Columbia University on The Sociology of Sensation. Corona will elaborate many of the ideas garnered from this research in his forthcoming book, Downtown Superstars: Inside the Game of Nightlife Fame, in which he traces a social and aesthetic lineage throughout New York's downtown scene, from Andy Warhol's Factory of "superstars," to Michael Alig's 1990s reign as king of the "Club Kids," to Lady Gaga's present fame and her following of "Little Monsters."

The panelists discussed authenticity, identity, and career schemes—some of Corona's own research interests.

"Be yourself," said jazz entertainer Brian Newman, who had previously teamed and toured with both Lady Gaga and Tony Bennett. Richard Kimmel, who received a master of fine arts degree in directing from Columbia's School of the Arts in 2000 and co-founded the Lower East Side's nightclub The Box, added, "If you can't be yourself, find someone else fabulous to be." The quest toward a more fabulous self largely reflects Corona's sociological fascination with nightlife.

Recent buzz about fellow sociology professor Shamus Khan's ethnographic examination of student nightlife at Mel's Burger Bar and 1020 may temper the surprise of such a nontraditional setting. In fact, it would seem that Columbia's sociology department is taking New York nightlife by storm.

But Corona's research focus happens far from the collegiate milieu of Morningside Heights. Corona has been carving out the terrain of this sociological frontier for four years now, making his way into the downtown nightlife scene with a curiosity skewed more toward the philosophical than the pragmatic.

A younger Corona may not have ever imagined that he would discover some of his most meaningful insights in New York nightlife. Early in his career, Corona had never quite thought of himself as a nightlife person.

Reflecting on his early sociological pursuits, he amusedly invokes the "totally different version of me," who dressed "straight from the Gap sales rack," with three IDs around his neck to verify his low-level military clearance while collecting data for his doctoral dissertation on the careers of U.S. Army officers.

After compiling a collection of Ivy League degrees (including both a Ph.D. in sociology from Columbia and a bachelor's degree from Yale University), as well as a graduate student award from the American Sociological Association for his dissertation research, Corona soon secured a new teaching position at Columbia.

Yet in his particular area of academic curiosity, a prestigious degree provided little help when, as Corona recalls half-chidingly, half-bemusedly, "I had zero look!"

Nowadays, Corona drops names downtown at the doors of some of New York's hottest clubs. "I do not wait on line," he says.

Today, he has cultivated both the savvy and the looks required to navigate the scene. When he pulled up to meet me at Capitale, a venue on the Lower East Side, before attending a charity gala, Corona had tastefully applied glitter eyeshadow and wore studded leather gloves. His hair is dyed a dark auburn.

But his career is more than a "before and after" picture.

Corona's look is only one part of the job, a requirement to gain access to what he describes as a "magical mixing pot" brimming with divas, drag queens, and varying degrees of celebrity. Through his lens, the club is a rich cultural terrain of gender and sexual identities, social classes and categories, providing insight into fundamental sociological questions of identity, exclusivity, and authenticity.

Corona's sociological approach has enhanced his understanding of the scene's underpinnings—how to attain and navigate just the right kind of exclusivity. In the social system of the nightclub, Corona conceptualizes the role of the doorman as a curator, letting in a diversity of identities and backgrounds but keeping out people like potential pickpockets and "hot messes."

"A good party demands good curation. You're essentially curating a night," Corona explains. "A lot of people do it very badly."

While some perceive this exclusivity to be unfair, even demeaning, Corona seeks to understand the process of crafting a unique experience without dismissing the pitfalls that accompany it. "It's very much the playground of the white, the beautiful, and the rich," he adds. "I don't want to wax utopian about what it is." But for Corona, this reality simply requires that "you're willing to kind of learn the rules of the game, learn how to talk to people, and have a kind of interesting persona."

For Corona, the performative aspect of nightlife supplies a deeper revelation about "how futile the policing of authenticity ultimately is."

Corona elaborates and points out that we all perform different identities depending on social context.

"Someone who knows you during the day as the office worker, as the bean counter, as the student, as the professor, and then sees you in nightlife," he says. "How are they to judge which is the authentic version?"

The preoccupation with an aesthetic of "realness," Corona admits, colors some areas of nightlife with questionable outcomes. He cites trends embodied by Refinery29's recent 29Rooms installation, held in a warehouse in Greenpoint with buses shuttling guests to its opening night event. He also names Givenchy's Fashion Week afterparty, held at a venue quite similar to Refinery29's, for implying that the façade of realness is antithetical to the planning required of a truly great event.

Corona compares these trends to Disco 2000, a weekly party held throughout the 1990s, "which is still considered so iconic and so magical and so able to achieve that mix. That took a lot of thought, that took a lot of planning," he says. "Does that make it less authentic? Because it perhaps doesn't seem as organic as it did originally?"

Rather than engage in authenticity debates, Corona prefers to celebrate the theatricality of nightlife and its nuance. Though prompted by exclusivity, nightlife requires a commitment and a diligence, just as with any elite endeavor.

To explain his perspective on exclusivity, Corona often uses university life as a point of comparison; incongruous as the club and the classroom may seem, considering both as social systems enhances understanding of mechanisms underlying both.

"If you let anyone into Columbia and Barnard, then your diplomas wouldn't mean anything," he says. "If they let anyone into the club in favor of democracy and anti-elitism, it would not be a fun party."

But in the end, he adds, "You've done things that ultimately benefit you."

For Corona, not only does that liberation trump the ever-elusive quest for "realness," but it holds the potential to help one access an even more authentic self-expression. "It's not you bending and twisting yourself to fit someone else's scene," he clarifies. "It's you becoming a better version of yourself, and that sense of freedom, of comfort with your own identity, will stay with you whether or not you ever step inside a damn nightclub again."

During the first interview between Corona and Wood, what was originally constrained to 30 minutes turned into five hours of conversation. Corona describes her as "such a special, insightful person." According to Corona, Wood is not only confident onstage, where she does "what no one else can do," but she is also well-read, articulate, and transcendent: She faithfully practices sita meditation, holding gatherings for the spiritual practice at her Chelsea Hotel apartment, where, Corona reports, she does not own a bed.

Wood is now a friend and counsel of sorts to Corona, who admits that his own personal relationship to nightlife demonstrates the same complexity of identity. Through his interactions with Wood, Corona has learned one of his most valued lessons in the scheme of both nightlife and career paths: "Tell the story that only you can tell."

Corona plans to do just that in his forthcoming book.

Corona's understanding of the merits and pitfalls of the nightclub's exclusivity is perhaps owed to his own familiarity with rejection. Still skinny, shaven, and accustomed to walking around with three IDs around his neck, Corona had far less success in his early attempts to gain entry to some of the clubs where he is now a regular.

He shares one example when he approached the host, whom he had recently interviewed, to make conversation and thank him for the opportunity. He was quickly blown off.

"He just muttered something about, you know, 'Oh, have you been upstairs?' and then he walked away. … I was furious. I was so angry."

But while other colleagues became discouraged and even quit the pursuit after such instances, Corona says he simply learned to swallow it and adapted. As for the present, the same person who brushed him off that night is now quite friendly with Corona, having invited him to events in his home, he reports with satisfaction.

"These questions of access will always be there," Corona acknowledges. "I know what it is to not be fully embraced by a scene."

Yet Corona says there's an opportunity for personal growth and a more nuanced understanding of identity through the clubbing culture.

"The stories of people like [Lady] Gaga and Michael [Alig], and even my own, indicate that there is a way in if you have a bit of stamina and a bit of stomach and are willing to just kind of play with your own identity in a way that's comfortable for you."

That said, how do Corona's discoveries in nightlife translate into his role at the University?

Most obviously, his research interests provide supplemental material for his courses; the recent panel exemplifies Corona's common practice of bringing a sampling of the nightlife sphere into the classroom. And of course, he notes, students can relate to his work, as it concerns an environment that they themselves are often beginning to explore.

Corona points out that his position as a professor is also a type of performance. He explains that this role encompasses the particular knack of conducting a lecture with just the proper pace, tone, and diction, as well as what he refers to as his "professor gear," typically tasteful yet unassuming ensembles of blazers, polo shirts, dark wash jeans, and the occasional scarf.

But perhaps most influential and profoundly personal are the broader ideas Corona has gleaned from his research endeavors, regardless of whether students intend to ever venture into a club.

"My one wish for every single one of my students is that they learn to live without fear," he says. "That whatever they want to do, whether they leave my class and do want to explore New York nightlife or hate the whole idea of it, whether they want to go be involved in roles that have nothing to do with culture, that whatever they do, they don't carry around a kind of fear. That they're not afraid to work and achieve the things that they want for their lives. "