All you need is love(s)

All you need is love(s) 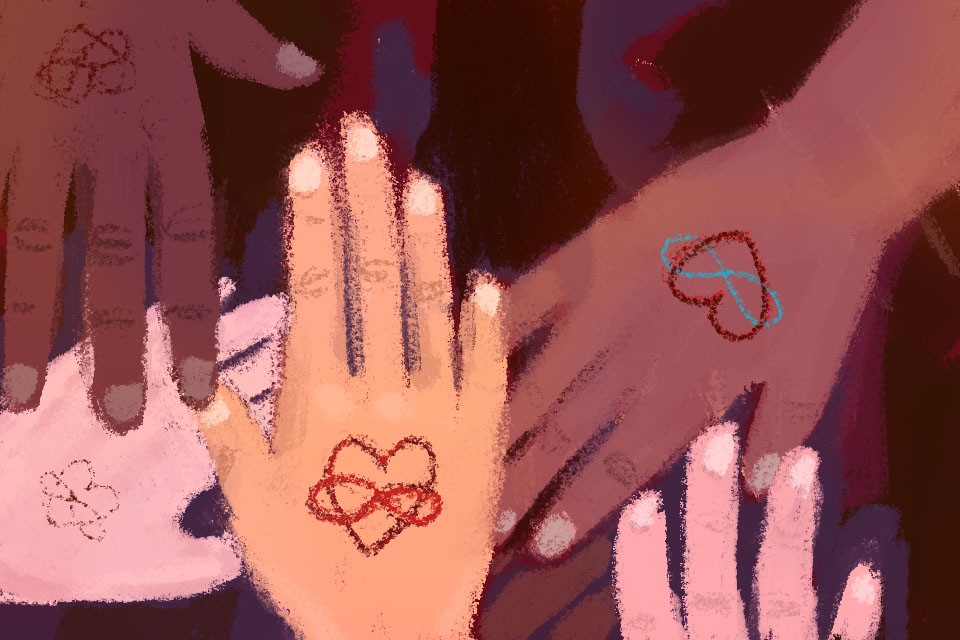 Like any other busy student, Popescu has work to manage, homework to do, and assignments to complete. But despite her busy schedule, Popescu found a polyamorous niche embedded within an apparently vibrant kink and bondage, domination, sadism, and masochism community at Columbia. Sitting with me at a table outside Hartley Hall, Popescu speaks rapidly and with verve about the community, making frequent use of hand gestures.

"I found out Columbia had a kink community and was like, 'Oh my god, this is so awesome. In that context poly is normal."

A standard definition of polyamory, often shortened to "poly," is non-monogamy. However, according to Popescu, this definition is too broad. She explains that while non-monogamy could be used to label every incident of infidelity or random group sex, none of these acts fall under polyamory's umbrella. In ethical polyamory, what often looks like and is judged like deceit in fact follows consensual, pre-determined rules.

It is perhaps these loose associations, along with a traditional allegiance to monogamy, that keep polyamory from gaining popular acceptance. According to a 2015 Gallup Social Poll, while acceptance of polyamorous marriage has more than doubled since 2001, approval remains at a mere 16 percent.

Throughout our interview, Popescu repeatedly said that she didn't view one relationship model as superior, just different from one another. Still, she believes most people take a perspective on polyamory that is too informed by monogamy.

"Really the practice of ethical polyamory involves a lot of openness and mutual communication. Sometimes it's like, 'Oh, give me all the gory details.' Other times, not so much. There's this mindfulness and openness and active consent regarding relationship practices in the polyamorous community."

For Popescu, this openness allows her to pursue a spectrum of relationships suited to her different desires and needs, ranging from platonic friendships to what she describes as a "primal" sexuality. On one hand, Popescu says her most intimate relationship is with someone who identifies as asexual. While she and Popescu have "played" together, Popescu says that for the most part, their relationship is platonic.

Interested in observing the polyamorous scene of New York City at large, I visited Bluestockings on the Lower East Side, a bookstore and cafe where every few weeks the polyamorous club Open Love NY meets. "We try to create a nonjudgmental group that just so happens to love the same way," Open Love NY Vice President Puck Malamud, whose pronoun is they, says. The group also aims to educate about polyamory through speakers and group discussion.

It was a casual night for Open Love when I visited. Small clusters of people were scattered throughout the room, some milling around, others talking as they waited in line for coffee. I found Malamud in a circle discussing recent movies with their poly friends.

Malamud once tried monogamy, but found it did not suit them. "I ended up lashing out in cruel ways. I wouldn't have wanted to date me back then," they say, chuckling. "When I knew monogamy wasn't for me, I just kind of went on in that [poly] direction."

Parents, at least most parents, don't love one child most, Malamud remarks, and to an extent, the same can be said of romance. Malamud explains that, to them, love is a qualitative rather than quantitative property, so counting or measuring "how much love" misses the point. Love is unconditional, absolute, and takes many different forms, they argue.

Talking with me to the side, Malamud hesitates to answer when I ask them where the polyamorous movement is headed. Though they concede that polyamorous individuals do not experience the same level of discrimination that minorities or homosexuals do, they recite a long list of legal privileges that do not apply to unmarried or nonmonogamous partnerships, including attorney and health care proxies, custody, health care packages, and defense against discrimination in the workplace, among other benefits.

Malamud believes these exclusions exist to incentivize marriage, preventing polyamorous parents from raising children according to their philosophy. These restrictions prevent, for example, many polyamorous parents from following the idea that "it takes a village to raise a child." More than a quaint aphorism, according to Malamud, the "village" is a poly ideal, a legal and familial structure many are striving to legitimize, though they are not sure how much progress has been made.

Polyamory comes with troubles other than legal woes, most very familiar to those in monogamous relationships. While it might be easy to glamorize the polyamorous existence  as hyper-passionate and free, Popescu emphasizes she isn't immune to drudgery just because of her polyamory. Like all students, monogamous or not, "Most of my time is spent studying. All jokes aside, my main relationship is with mechanical engineering."

Malamud also recognizes this reality. Once, when they were taking care of his sick grandparents, Malamud was so strapped for time that they did not see any of their partners for months. Like anyone else, sometimes life gets in the way of romance, except Malamud has to explain themselves to multiple people.

However, she doesn't resent this readjustment. "They [my partners] are what they are, and I'm growing that part of myself and opening up and having a great time. There's a lot of joy to be involved in spending time and energy in all of my partners and that is regardless of any act we do together."

Malamud and Popescu rely on their intuition to identify this joy. Malamud diagnoses themselves in the negative, feeling restrained and stifled by monogamy. Popescu finds a similar internal inclination drawing her to polyamory. "For me, it's a type of intrinsic feeling," she says.

"And no matter what type of arguments for or against it there might be, I don't even need to rationalize it to myself."