A View on Vernacular

A View on Vernacular 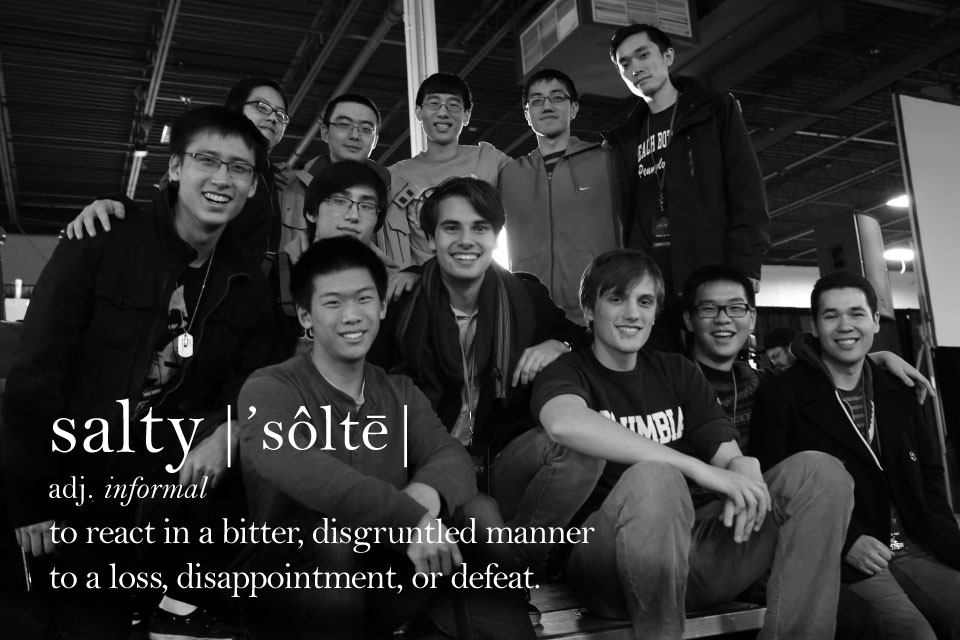 At the weekly Saturday night meeting of the Columbia Super Smash Bros. Club, 569 Lerner Hall reverberates with the clicking and clacking of controllers and the low bass of the occasional groan, as club President and Columbia College junior Zane Bhansali explains to me the meaning of a "salty" state of mind.

"You're just pacing around, like 'mmmm,'" Bhansali grimaces, as if swallowing something distasteful. "There's some salt going on there."

While the mainstream has adopted the word "salty" to describe a disgruntled response to disappointment, it represents an even stronger reaction in video games, according to Bhansali.

"People use it now just to mean 'mad,' but 'salty' in fighting game terms means you're excessively angry about it," he says, slicing one hand against the perpendicular of another to punctuate his point.

"When we're explaining those words to you, we're just like, 'Ahhh!'" says Smash Club Vice President Diego Duhrssen, a Columbia College sophomore, stretching out his H's in exasperation. "You just kind of have to know. You just learn. You just feel it."

For many student groups within the Columbia community, slang fosters an inclusive sense of identity, but it can often sound unfamiliar to others. Referring to both highbrow and lowbrow language use, the definition of slang is itself paradoxical, according to the linguist David Crystal in The Cambridge Encyclopedia of Language. Slang terms are spoken casually by some—in ways that are accessible, open to outsiders—but used in a more specialized and exclusionary manner by others.

Barnard sophomore Hannah Orans, Duhrssen's girlfriend and a recent addition to the club, compares Smash slang to a foreign language in which she is gaining fluency. "There's definitely a slang I'm not fully fluent in yet," she says. "It wasn't until I started playing and figuring out what the controls and certain moves were that I actually understood what [the gamers] were saying."

Sometimes Duhrssen will drop Smash slang into his everyday conversations to see if the person he is speaking with shares an interest in Super Smash Bros.

"Sometimes I'd say it when I'm talking to people just to get a reaction from them to see, 'Do you know?' or 'How weird is this for you?'" Duhrssen says.

"I think of slang as something informal amongst friends, where you can say, 'This is something between us. This is what we know,'" Klimentov says. "There's maybe a secrecy to it, a personality to it that not everyone can belong to."

Klimentov says that the parameters for what can be considered slang are constantly evolving, sometimes expanding and sometimes shrinking. He remembers this happening to some words in his own vocabulary. "I wouldn't consider 'yo' slang anymore. It's so widely used by so many people in so many contexts, it no longer feels like it has an outsider status."

According to Zach Calluori, a Columbia College junior and guitarist in the Louis Armstrong Jazz Performance Program, there are no clear boundaries between jazz slang and jazz jargon, as he considers the art form a movement within a subculture. The technical terms adopted by jazz musicians are just as much a part of how they constitute their identity through conversation as their colloquial slang. These two categories of words tend to mingle without a clear dividing line.

"For a long time, jazz was marginalized. It wasn't respected as a musical tradition with a vocabulary that merits the term 'terminology' per se," Calluori says. "These words are tools for relating to people and conveying things that I think mostly revolve around the music."

For Calluori, jazz slang adds character to jam sessions. To "vibe" someone, for instance, is to signal to them that they are playing an excessively self-indulgent solo. To "vibe with" someone, on the other hand, is to be on the same wavelength as them. 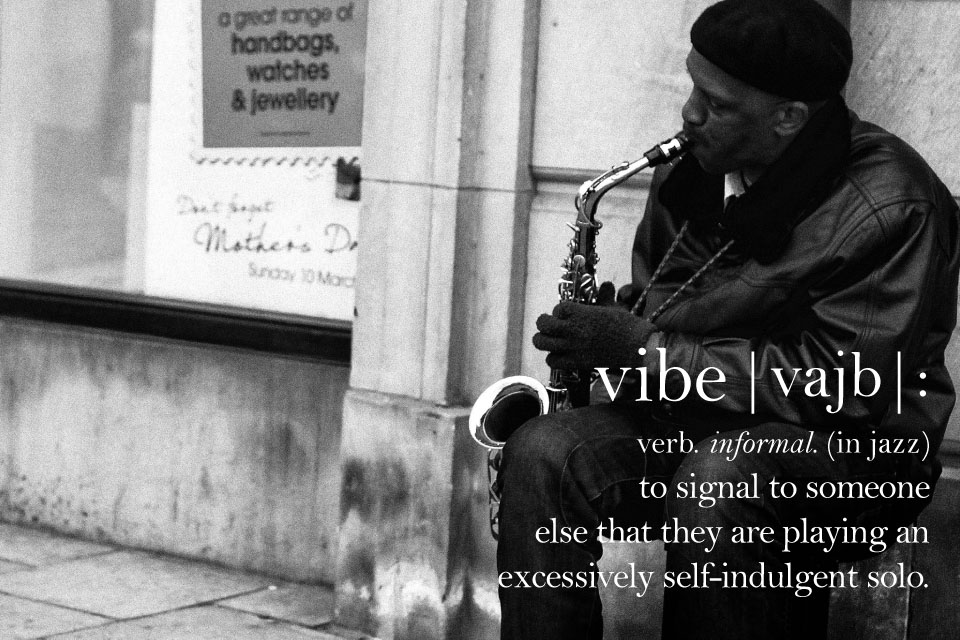 While Calluori uses these words outside of a musical context, to him, jazz slang always comes secondary to musical expression. The most important factor in the shared identity that jazz musicians embrace is, after all, their devotion to creating music.

"These words aren't about me expressing that I play jazz. When we talk about language in jazz, it means musical language: what songs you know and what mix you've internalized," he says. "Music is ultimately where you will be making your statements."

Jazz slang serves as familiar shorthand for the practical techniques used in the production of jazz music and the associated emotions and experiences of the jazz musician. It's a free-flowing colloquial discourse—but not every kind of slang is so relaxed. Columbia's debaters are very precise about word choice because rhetoric is the foundation of their art. Specialized slang in debate gives Adem Sengal, a Columbia College sophomore and a varsity member of Columbia Debate, a framework for analytical thinking.

"If I were to use these words, it makes me look at things in a very structured manner," he says. "Debate slang is focused on breaking down arguments. It's focused on looking at different pieces, goals that the words are oriented to, like the word 'bright line.' The phrase 'insofar as' is used for a logical link. Using those words frame the way you think about the issues."

When it does not advance an argument, however, Sengal admits debate slang can sound affected. He cites a favorite amongst debaters and Columbia students alike: the word "problematic."

"There are so many simple ways of saying 'problematic', but debaters really like saying 'problematic' instead. Saying 'this is really problematic,'"—here, Sengal deepens his voice, adopting a tone of pompous urgency—"makes it sound like there's something more to be said there."

"You can say, 'It's a problem.' You can say, 'This is an issue.' I don't understand the need for the word," he says. "But I do it myself. … A lot of times, it's just led by the words we use because we take on the persona of a debater when we're talking to each other." 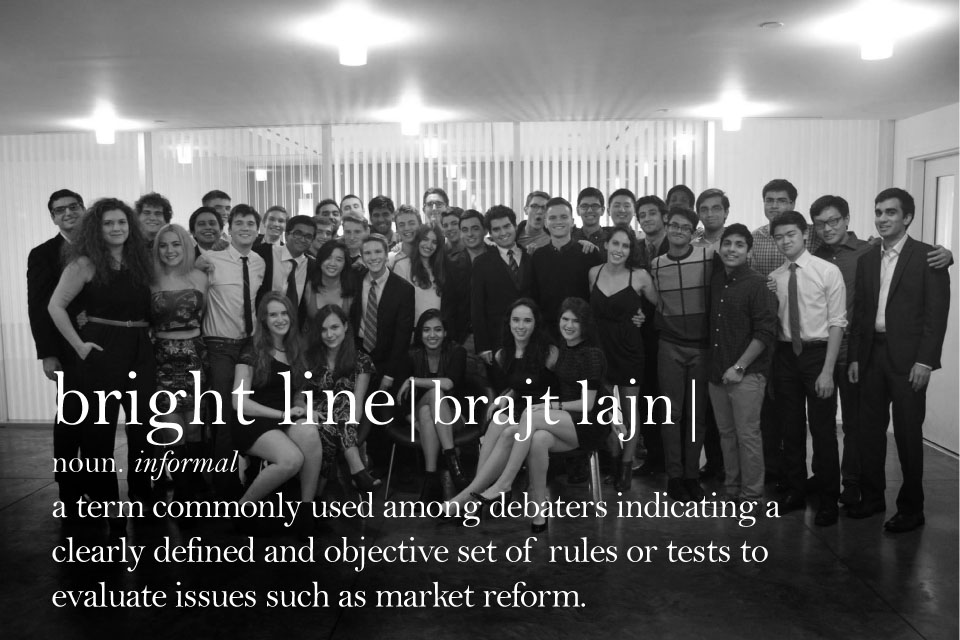 For Sengal, both technical and casual slang exist in debate. While some debaters prefer to use technical jargon such as the "bright line" to discuss market reform, a large portion of the debate community—sometimes including the same people—still uses informal language when speaking about social issues. In such circumstances, Sengal finds lowbrow slang more effective and accessible than highbrow jargon.

"I like to think I have a decent vocabulary, but I don't use that vocabulary whenever I find the opportunity to do so," he says. "Usually I stick to words that are below three syllables and are commonly used. I think it's the easiest way to talk to someone and have an engaging discussion."

Even so, Sengal makes sure that his informal slang serves a purpose. He seeks to find appropriate moments where he can use informal language to have a conversation that is substantive, accessible, and inclusive.

"I can say the same thing five different ways, but I want to make sure that when I'm saying it, it's being received," Sengal says. "I think that's why I have so many slang terms that I use for the different voice that I take on. If you track me throughout my day, I would use maybe five different versions of slang. But I would consider them all equally part of my identity."

Slang can be at once casual and specialized, strengthening bonds within groups despite sometimes appearing exclusive to outsiders. Casual to some, specialized for others, slang presents a different meaning to every Columbia student. And while slang from different subgroups all co-exist on campus, the extent to which our language is influenced by our environment is an open question.

We call our 24-hour undergraduate library "The But." Bereft of both housing lottery luck and natural sunlight, students living in windowless McBain Hall rooms are "shafted" or "McShafted." We abbreviate our course titles to "Lit Hum," "FroSci," and "CC."

The annual Varsity Show has had a hand in coining slang that enter the Columbia parlance. The 109th Varsity Show invented the nickname "PrezBo" and the 119th Varsity Show made a joke about the "weather machine," a reference to the blue skies and spring breezes that miraculously appear, without fail, during Days on Campus.

As part of the 121st Varsity Show last year, a scene set in a Columbia classroom satirized comments made during class discussion. The production mocked the use of filler phrases when students make uninspiring comments, such as, "To piggy-back off of that, I ... I agree!" Conversely, it also parodied the overuse of theory and jargon: "I just want to point out that the putative production of performative gender identities are oppressive and cyclical constructs embedded in our postmodern subjecthood."

Ally Horn, the co-scriptwriter of the 121st Varsity Show and a senior at Barnard, believes that certain settings shape the way students express themselves. "It's a lot easier to assign the way people speak to a situation, like the classroom," she says. "There, it's much more about what's being said than who they are." 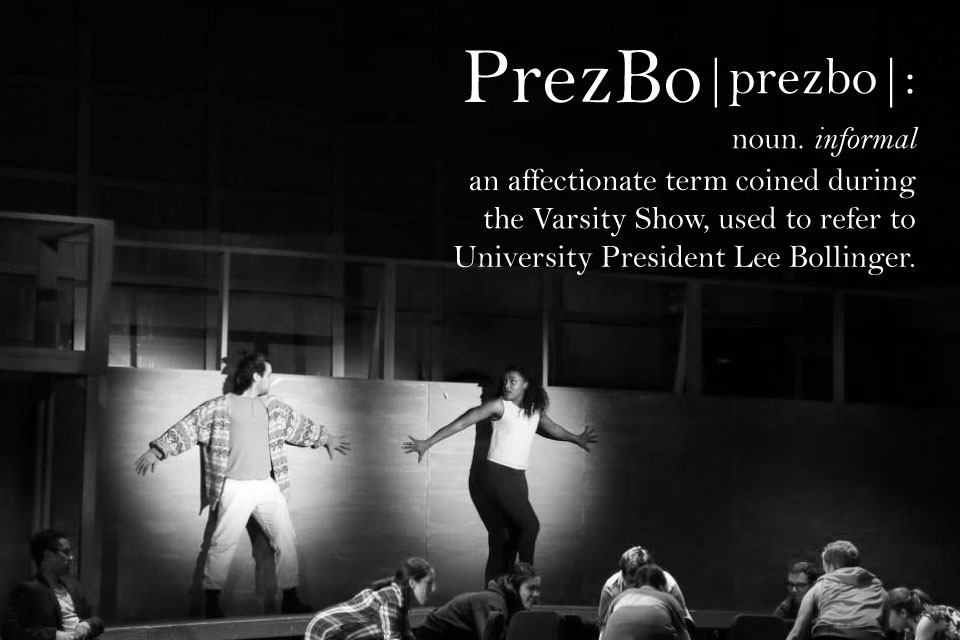 The scene lampooned the language and personae students tend to adopt in the classroom. Outside of specific settings on campus, however, Horn considers personality and backstory better indicators of how characters might talk, rather than the environment in which they are placed. "You're making fun of the situation, and not the person," she says.

Similarly, Klimentov believes that slang has more to do with a student's individual mannerisms and participation in interest groups than the Columbia vernacular at large. "It's very much, I find, based on where you belong on campus and what kind of inside jokes you are familiar with," he says. "I can certainly think of people whose mannerisms I have picked up."

Nevertheless, Klimentov believes that Columbia students share a common way of thinking and expressing themselves. "There are some ideas that are shoved around very freely that people all understand and have in common," he says. "There's a measured approach to things. There's the opposite of slang."

While he does not consider campus vernacular to be slang, Klimentov believes that Columbia students speak a common cultural language.

"It's constantly being made and remodeled based on what new students are being exposed to and ideas that are being taken out of the vernacular by graduating students," Klimentov says. "As much as I'm not aware of it now, there's a language that I would miss and be unable to replicate in other places as soon as I leave Columbia."