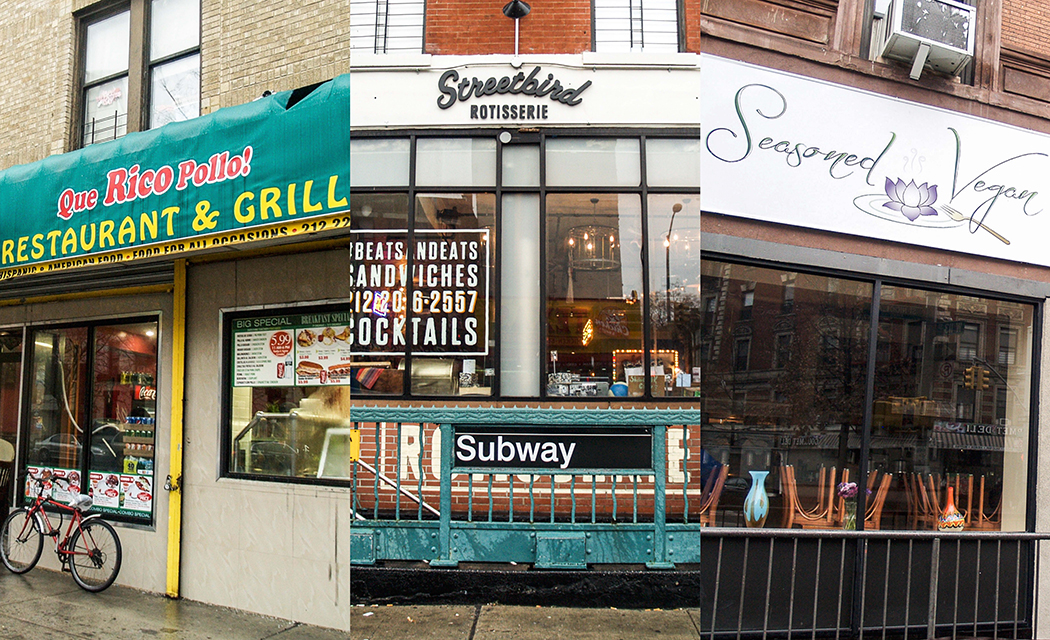 Elements of Central Harlem's past, present, and future are manifested in the variety of new restaurants that now serve on its streets.

When you walk inside Streetbird Rotisserie, you feel like you're in Harlem. The music is soulful, funky, hip-hoppin'. There is a tower of boom boxes reminiscent of Radio Raheem back in Spike Lee's Bed-Stuy. Graffiti art, framed black and white pictures, and a film projected onto a wall remind one of a blacker Frederick Douglass Boulevard, back when Harlem food meant soul food.

But beyond Streetbird's doors, on the other side of its large rectangular windows, a new style of street cuisine has been emerging with the appearance of new restaurants like Seasoned Vegan and Latin-American eatery Que Rico Pollo.

Harlem is experiencing a food renaissance over 10 years in the making, and cuisine changes are reflective of a greater cultural shift in a Harlem that is becoming increasingly younger, whiter, and middle class.

At the time of the last census in 2010, Manhattan Community District 10, or Central Harlem, which extends east from Morningside Avenue to Fifth Avenue and north from Central Park to the Harlem River, was identified as an area made up mostly of "moderate- to low-income families." White people comprised 9.5 percent of residents, the third highest racial demographic after African Americans (63 percent) and Hispanics (22.2 percent).

These numbers are changing rapidly, and residents like Allen Rodney, a Central Harlemite for the past 44 years, believe that places like Streetbird are looking forward to a new Harlem rather than catering to the neighborhood's historically black, lower-income demographic.

"The restaurants change to accommodate the community," Rodney says. "For the most part it's a good thing, but that doesn't necessarily mean that the people that's been livin' here actually go to these places. It may be above their price range, and it may not be the type of food that they eat. … It's not really for the black folks that's been livin' here. It's for the changing community, the ones with more money, so everything fits up to accommodate them."

Streetbird was created by Ethiopian-born, Swedish-raised celebrity chef Marcus Samuelsson almost a year ago with the intention of assuaging such feelings of exclusivity. After founding Red Rooster Harlem, a much higher-end restaurant on Malcom X Boulevard, Samuelsson opened Streetbird as a cheaper option meant to connect more with the folks in the neighborhood.

"The goal of Streetbird was to be a place that people in Harlem could enjoy on a day-to-day basis," says Casey Giltner, Streetbird manager and resident of Central Harlem for the past year and a half. 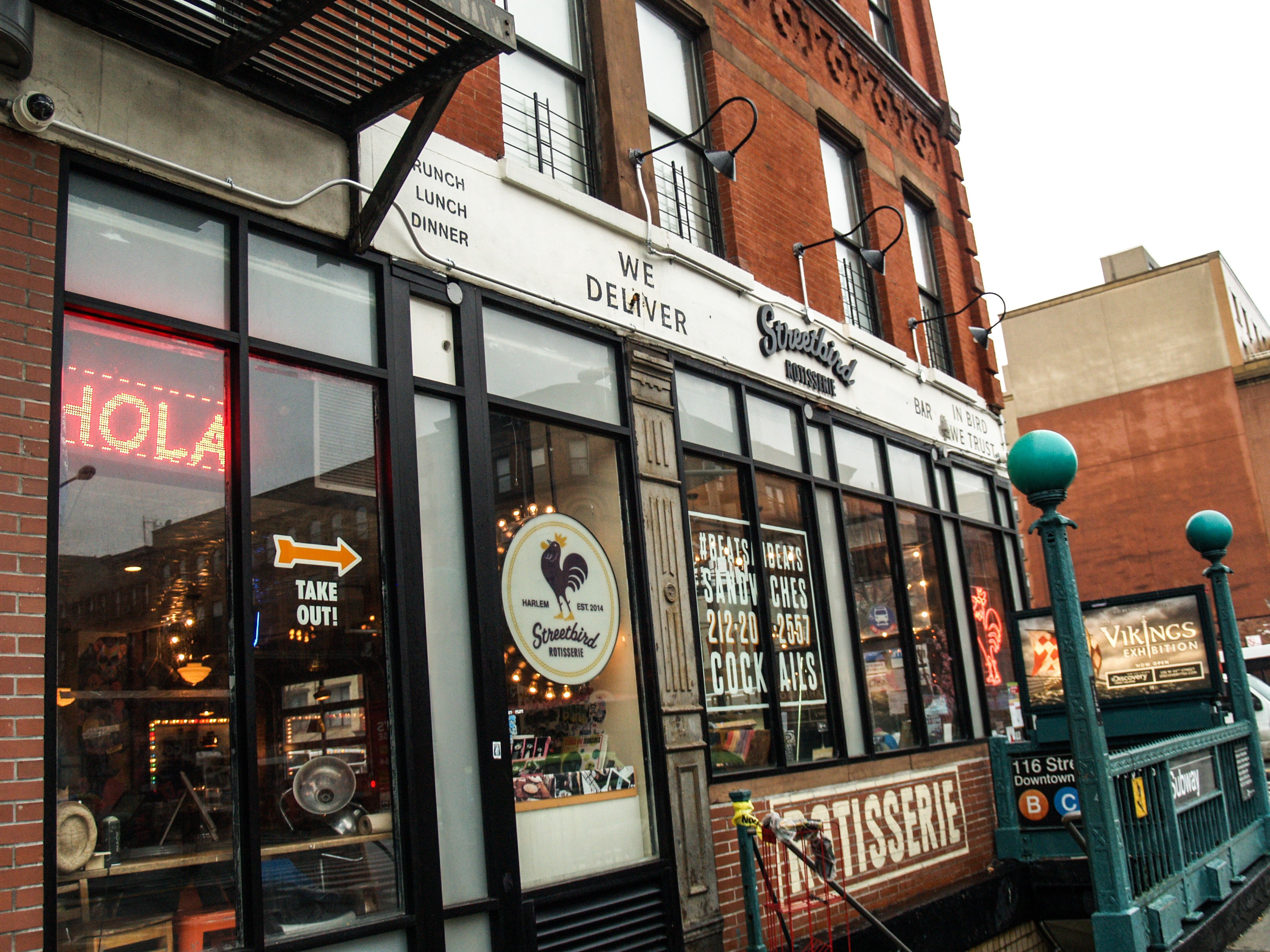 So far, she thinks that the restaurant has succeeded in that goal.

"For the most part, what we see on a day-to-day basis is a lot of the same faces and a lot of people that are coming from the neighborhood," she says. "I mean, you're seeing as many 20-something-year-old white people as you are seeing like 40s, 50s, black. It's just all—it's a fairly diverse area right now, and income range, we're seeing that spread too."

But though Streetbird certainly is no Red Rooster, its prices are still misaligned with the moderate- to low-income range of the surrounding populus, per the New York City district profile. Six dollar sides and $10 sandwiches have earned the restaurant a double-dollar sign ranking on Yelp.

Giltner points out, though, that the economic landscape of Harlem is shifting.

"We wouldn't have been here 20 years ago or 10 years ago or maybe even five years ago," she says. "I mean, definitely, the neighborhood demographics have changed. … The restaurant is a neighborhood place that many people in Harlem enjoy, and certainly, there are people that can't. That's just the reality of the situation … it's not priced for everybody in Harlem."

Giltner makes sure to mention that Samuelsson, though a foreigner, is black and has been living in Harlem for a while.

Despite this context and Streetbird's aesthetic homage to the old school, it still isn't necessarily "as Harlem" as some of the other sit-down restaurants that have emerged in the past couple of years, some of which, like Seasoned Vegan, have been started by lifelong community members.

"We're as Harlem as it gets," Aaron Beener, co-founder of Seasoned Vegan and a Harlemite since birth, says. "That's what's so cool about [Seasoned Vegan], is that it's totally Harlem from the core and homegrown, so there's nothing foreign about it."

While Seasoned Vegan is, like Streetbird, a very new establishment with entrees priced in the $11 to $18 range, Beener sees Seasoned Vegan as separate from the "renaissance" not only in its location (Streetbird is on Frederick Douglass Boulevard, where most of the new restaurants are concentrated, whereas Seasoned Vegan is on St. Nicholas Avenue) but also in its founding.

Beener and his mother started Seasoned Vegan almost two years ago in part as a way of introducing a healthier option to their neighborhood.

Harlem had never had a vegan restaurant before Seasoned Vegan. 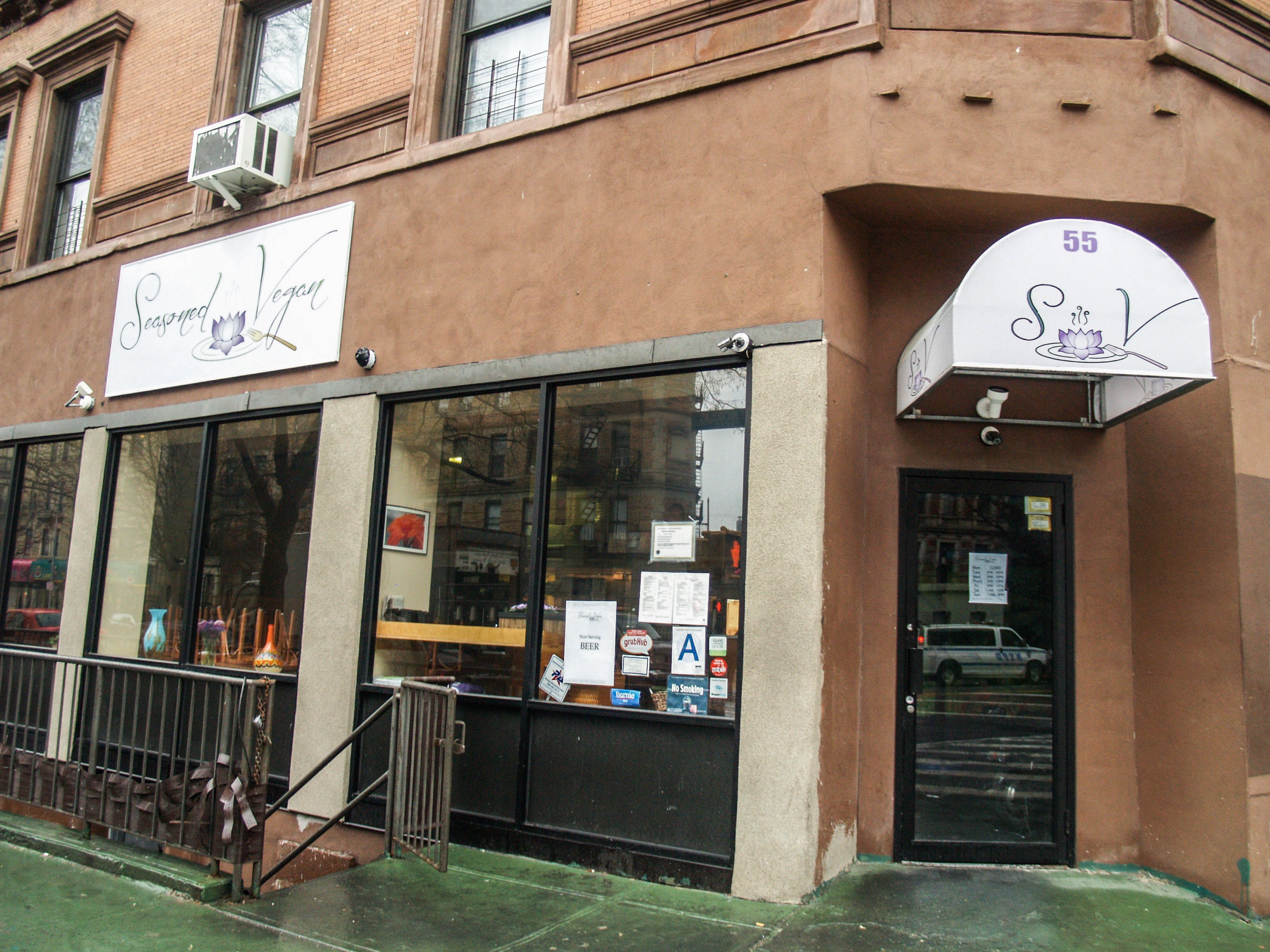 "[Seasoned Vegan] definitely wants to be a living example for African-American people who come from a long-standing food culture that is pretty rigid and stuck in ingredients that are not necessarily healthy," Beener explains.

The neighborhood has been receptive, but Beener acknowledges that Seasoned Vegan is beyond the norm.

"We're an outlier," he says. "I don't think we necessarily fit into the new scene. I think that, if there is a renaissance in food, I feel like we're pushing the agenda. … Our profit margins are lower [than other new restaurants in the neighborhood], but we have a mission with our business. It's not all about profit for us."

If Seasoned Vegan's primary motive was profit, Beener says they probably would have located the restaurant elsewhere, in a higher-income neighborhood where people have more money to spend.

That said, Beener welcomes the renaissance.

"It's really cool that we have our own restaurant row now. I mean, it just gives people more options cuisine-wise. They may not have more options in terms of things that they can afford," Beener says. "But I think it's cool that people want to come here and start businesses and that they can find success here as well … and hopefully that will encourage more people from the neighborhood to step out on a limb and open up their own businesses as well."

"The food renaissance just helps us. It just helps highlight how different we are," Beener says. "It just shows us as being even more of an outlier, so I encourage other spots to open. Oh please. Open 'em up."

Less than 200 feet away from Seasoned Vegan, Que Rico Pollo also opened up almost two years ago but is different from both Seasoned Vegan and Streetbird. Its items are cheaper, and it is frequented by a lower income bracket than many of the other new restaurants, a distinction that potentially puts it at risk in the face of Harlem's economic uplift.

"Our menu right now …it's appealing to the Latinos or the black, African-American, the low-income person," says Newki Polanco, whose Dominican parents decided to open shop outside of their South Bronx neighborhood mostly because 46 St. Nicholas Ave. offered the best price for a good location.

Coming into Central Harlem, the Polancos knew nothing about the neighborhood's demographics or about places like Seasoned Vegan and Streetbird.

"They didn't know what Harlem was and the kind of people that were around here," Polanco recalls, speaking of her parents. "While they were remodeling, that was a concern for them. It was like, 'Uh, there's mainly like low-income African-American people around this area,' and they were uncertain. They were like, 'I don't know if we're going to thrive here or not.'"

While business from both the black and Latino communities in Harlem has been keeping the restaurant afloat, Polanco says that there are very few white or higher-income people that come through, and she admitted to knowing very little about the economic and cuisine changes that are occurring in Harlem.

Nevertheless, gentrification is something that Polanco says she thinks about.

"When you look at our prices, like our menu, you know, like it's the—can you say lower class? I don't know. Yeah, like lower income. … I mean [gentrification] is scary. Like, it'll happen, and I'm pretty sure [of] the effect that that's going to have on our income."

For the time being, Polanco says that they haven't felt the pressure. Although they may not be frequenting places like Streetbird or Seasoned Vegan, a lot of low-income African Americans are still in the neighborhood, and Que Rico Pollo is a regular lunch spot for a lot of the Latino construction workers who, Polanco says, consider the restaurant a "home away from home." 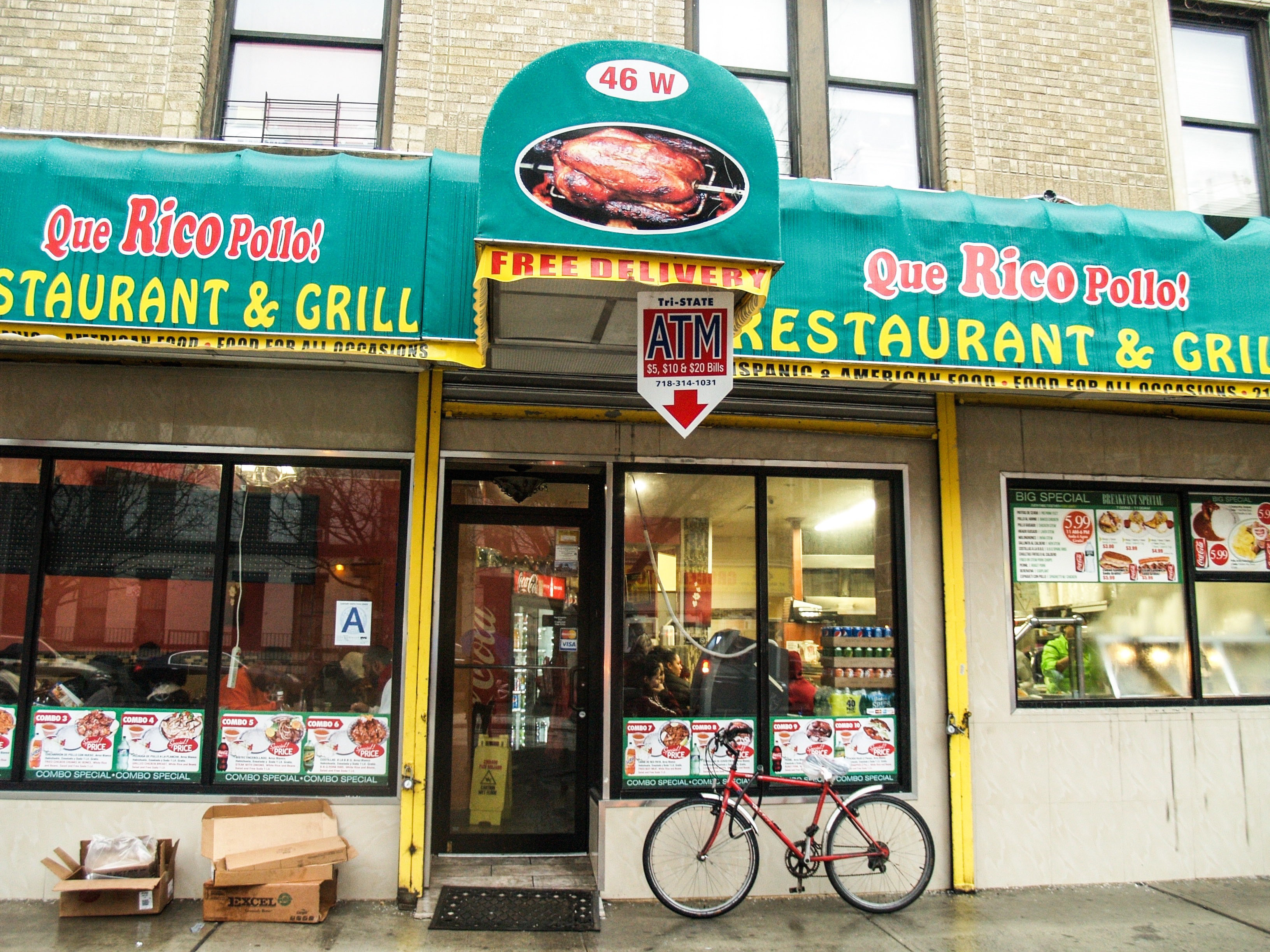 As the neighborhood continues to change, Polanco foresees Que Rico Pollo being forced to undergo a change of its own in order to accommodate the new demographic, maybe serving smaller portions, for example, or changing the food's visual aesthetic, she says.

Beener has experienced his own personal struggles fitting into the new neighborhood, including finding an affordable apartment and watching friends from Central Harlem being priced out into The Bronx and Washington Heights. He says that he sometimes fears that a lot of customers that Seasoned Vegan currently serves in Harlem may not be around one day due to changes in the neighborhood.

Despite these changes that Beener perceives, Polanco believes that Que Rico Pollo will always stay cheaper than the competition. A side of crispy brussel sprouts at Streetbird is the same price as a large cow feet soup at Que Rico Pollo. She thinks that despite whatever changes are coming to Harlem, this restaurant will endure.

"The people that eat here, they're going to be around. Yes, there's an influx of middle class, upper, like better wages and stuff, but," Polanco notes, "the projects are right there. … I'm pretty sure they're not moving."