This Land Is Your Land: Birthright and the Jewish Identity

This Land Is Your Land: Birthright and the Jewish Identity 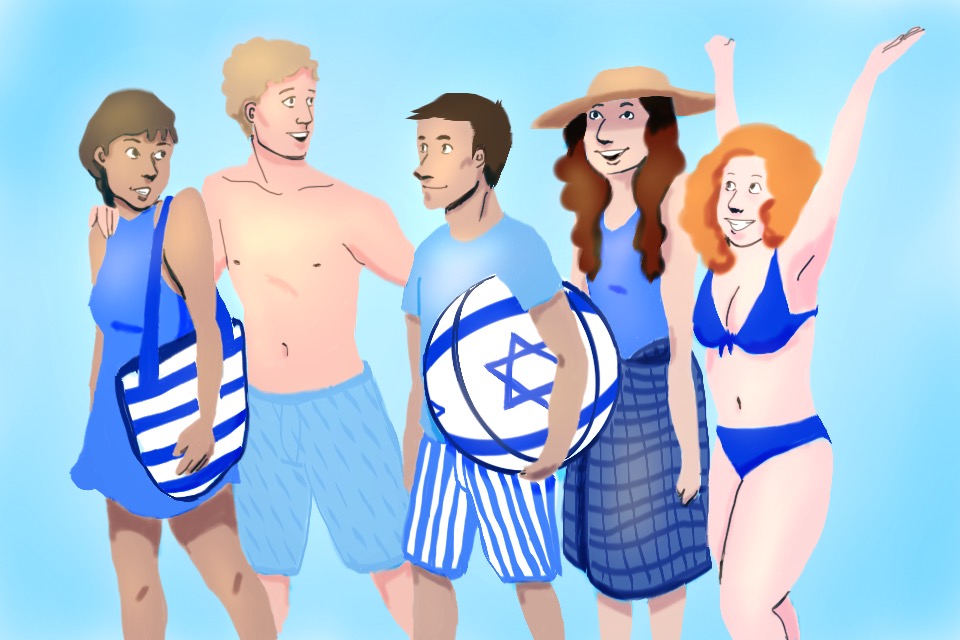 "This is a place where I go and visit family, and where I ran around naked as a child and visit my cousins and play games … and pick fruit."

Eytan Penn, a sophomore in the General Studies-Jewish Theological Seminary joint program, describes something just short of Eden when he talks about Israel. We sit on armchairs in the Lerner Piano Lounge on the same Friday afternoon as Columbia's career fair, where, as if to juxtapose Penn's childhood utopia, students in suits Skype with Goldman Sachs representatives.

Penn has grown up spending time in Israel. He has family there. For this reason, he sees Israel as a homeland—but maybe not the uppercase H Homeland. "I don't feel the connection to the land religiously. I feel a connection as an Israeli citizen."

Upon birth, Jewish people inherit the right to become citizens of a strip of land bordering the southeastern Mediterranean given the official name of Israel in 1948. In the winter of 1999, the first group of young adults traveled there free of charge to explore the land that ancestry had promised them through a new program called Taglit-Birthright Israel.

Today, it is known as simply Birthright—a 10-day trip to Israel for any person between the ages of 18 and 26 who is Jewish by blood. The program is donor-funded, so participants don't pay a dime.

The sponsored travel and call of the homeland are powerful draws to many Jewish students at Columbia, whose Birthright experiences range from transcendent to promiscuous and skeptical. Regardless of whether they have gone on Birthright, Jewish students tend to have strong views on the program.

Jackie Brown, a Columbia College first-year, attended the program in December. Brown joins me in Lerner holding a cardboard bowl from Ferris Booth Hall. This is usually her lunchtime, but she's agreed to speak with me, because she loves talking about Birthright.

As her plane descended toward Israel, Brown looked forward to feeling an inborn connection to the promised land below her. "Everyone says that when you get to Israel, you feel sort of like it's a homeland or something," she explains.

But her arrival didn't feel like a homecoming. The kibbutz where she stayed smelled like a farm. She was surrounded by soldiers who had lost friends to the violence between Israel and Gaza. Little she saw resonated with her experience growing up in Westchester County. She now thinks that assuming a place so foreign could have ever been a beacon of familiarity was naïve. "That's a little ridiculous," she says in hindsight.

What had the promised land promised? And where was it?

For some students, like Barnard sophomore Lena Rubin, the mantra of the "promised land" jarred her with a disappointing reality. Rubin's first trip to Israel occurred as part of a family vacation, but her experiences there helped shape her critique of the Birthright program.

Taking a break from her library job to join me in Blue Java in Butler, Rubin wears a forest green beanie over her violet-grey hair. She believes that Birthright self-selects relatively secular Jews and attempts to bolster their religious identities. "I definitely picked up on that. The word 'sacred' was used a lot."

She adds that Hasidic Jews don't go on Birthright—maybe because their religious identities and allegiance to the Homeland don't need bolstering.

Rubin defines what she believes to be the mission of Birthright: "I think it's a political way of connecting relatively secular relatively well-off American Jewry to the Israeli state," a loud-voiced statement from a soft-spoken person. "I think Birthright is problematic and it's really fun," she says.

One aspect that is both famously fun and arguably problematic about the Birthright program is the relationships it fosters.

When I mentioned that I was writing about Birthright to a friend, she sat back in her chair and laughed. "That thing where they try to mate Jews with Jews?"

"I think that it was a very sexually charged atmosphere," Rubin says of the Birthright program. She became romantically involved with another Birthright participant, and she was surprised by the level of excitement her relationship generated among the group leaders. "It was sort of this fun, happy thing that was like, 'Oh! Birthright can do these amazing things! Isn't it amazing that you met this person, and you couldn't have met this person if it wasn't for Birthright?'"

Rubin's was by no means the only relationship formed on the trip. She says that leaders strongly encouraged "pairing up" by taking the group to bars and buying them alcoholic drinks. She believes these activities were in part meant to initiate hookups or spark romantic interest between participants. "It felt like if you weren't doing that, you were sort of missing out."

"To some extent, the purpose of Birthright is for Jews to meet other Jews and end up getting married and sending their Jews on Birthright," Penn says. (The third "Jews" refers to the hypothetical couple's Jewish offspring).

Ultimately, it's easier to be born a Jew than to become one, which may begin to explain what Rubin perceives as a nudge toward love, marriage, and a Jewish baby in the baby carriage.

"Judaism doesn't want to force conversion on anyone," Penn says. Jewish missionaries don't exist. The community seeks commitment, and converts must go to great lengths to become Jewish, which they often do for the sake of Jewish spouses or family members. The most efficient way for Judaism to preserve itself is through existing bloodlines.

Yet meaningful platonic relationships arise just as often as romantic ones on the trip. Brown saw friends from Birthright perform at Battle of the Bands last weekend. Penn still sees some of his friends from the trip every day at school. He notes that going on Birthright through Columbia/Barnard Hillel, as he and Brown did, made it easy to form lasting relationships because every participant returns to the same campus.

Penn says that the program can help enhance the religious identity of participants by building social bonds. "I would say the founders of Birthright want to give secular Jews some sort of connection to Judaism, and the best way to do that is meeting other Jews."

Such emotional connections, he believes, are as much the mission of Birthright as advancing Judaism by "mating Jews with Jews." Penn thinks that the trips recognize certain realities about the nature of Judaism: how Jews as a social group are linked in ways both obvious and not.

Columbia College junior Sydney Segal, a practicing Catholic who went on Birthright, joins me in the Diana Center. Energetic and fast-talking, Segal reiterates the familial ties she maintains to Judaism without practicing it as a faith. "Since I see Catholicism as my religion and Judaism as my culture, they almost complement each other in a way."

"We had a speaker on the trip who literally told us, 'Judaism isn't a religion. It's this culture that we share, and a history,'" Brown recalls, confirming Segal's earlier sentiment.

Penn explains that Segal's areligious affinity for Judaism is fairly common. "Some people would argue that Judaism is an ethnicity," Penn says. "I agree with that. You have scientific proof." He refers to Tay-Sachs disease, a rare disorder that destroys nerve cells in the brain and spinal cord, most common in people with Ashkenazi Jewish ancestry.

"Judaism was a very blood thing," Penn says. He explains that traditionally, Judaism is passed from mother to child upon birth. The language of blood—in that Judaism passes through inheritance—is unique to Judaism as a religion. In many other faiths, one must be initiated into religion—Christians, for example, are baptized. Jews are simply born.

Further, blood ties instead usually refer to ethnicity. "I have Spanish blood," for example—that's something you hear. And if Judaism is an ethnicity, Israel is—or has become—its country of origin.

But unless it is wrought with childhood memories of purity, nudity, and fruit-picking, as it is for Penn, that land is not Edenic.

Somehow, though, visiting Israel can still get through to skeptical Jews.

"There were times when I felt like, wow, in spite of myself, this is a really amazing place to be," Rubin recalls. "I'm so lucky that this is such a beautiful place and such a culturally rich place that is supposed to be my home."

And for people like Brown, the drinking and hookups were sometimes eclipsed by the power of being in a setting infused with cultural memories. Brown remembers one particular trip to an Israeli desert. At night, the leaders told the students to sit for 10 minutes and think, pray, relax—whatever they wanted.

"I was just sitting there looking at the stars, and it was crazy. It was like, wow, my ancestors were once in this desert. And that was a moment when I felt really connected to the land of Israel, rather than the idea. So many people have walked in that place. And then I was there."