From Kansas to the Emerald City

From Kansas to the Emerald City 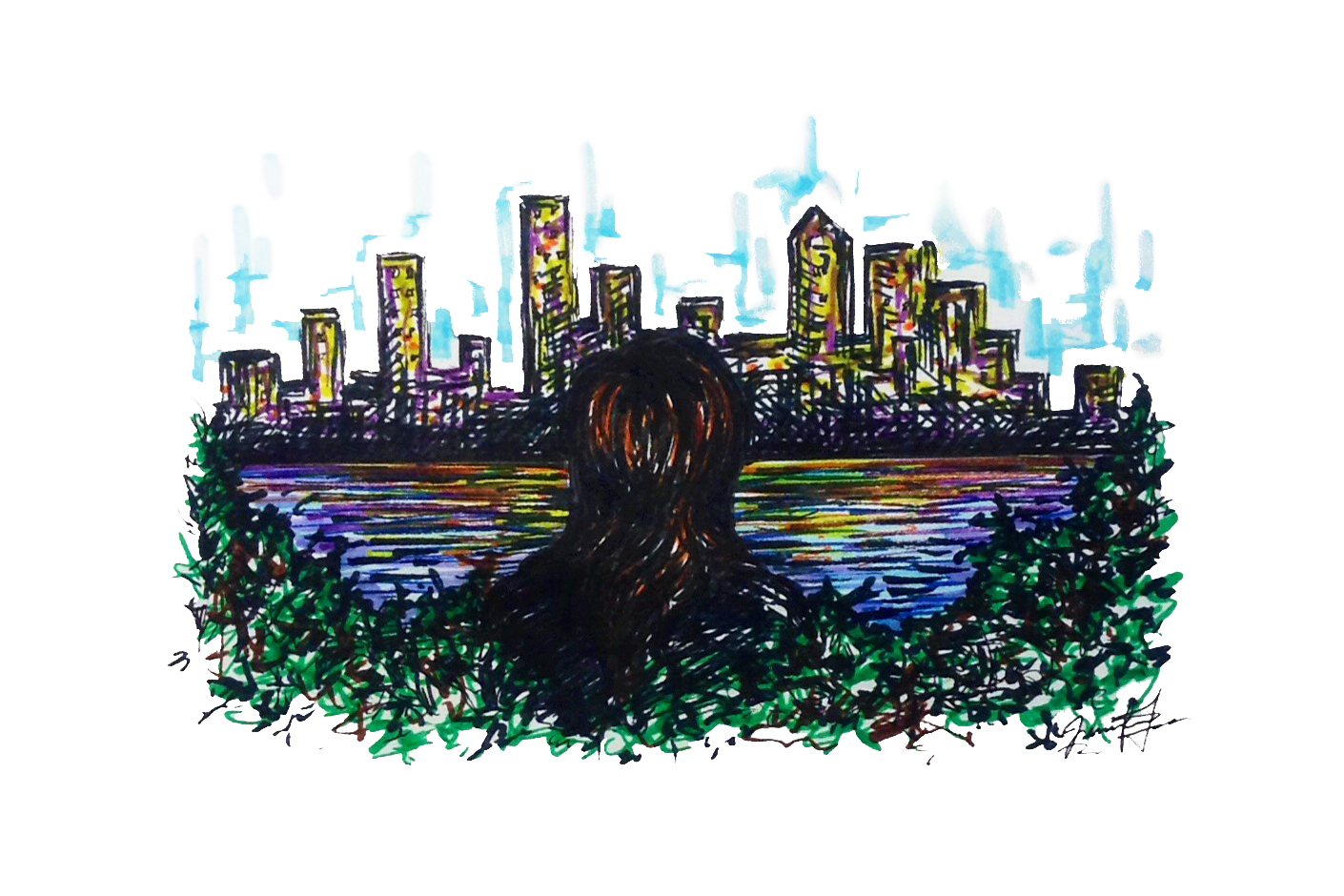 "Toto, I've a feeling we're not in Kansas anymore," was my first thought on the last day of summer as my parents and I strolled through Midtown. The sounds struck me most; instead of the wind rustling through a thousand trees, I heard the constant cacophony of humanity in shouts, car horns, music, and confused tourists. Throughout the next few months, I sometimes found myself needing a pair of ruby slippers to click together while repeating, "There's no place like home."

Moving from rural America—in my case, New Hampshire—to New York City is a transition that creates culture shock and necessitates assimilation between polar social opposites. It involves social shifts broad and minute—the way people style their clothes, the kinds of relationships they have with their friends, whether they say "I'm fixin' to eat" or "I'm hungry." In my case, I came here hoping to embrace these differences, though I also felt intimidated by the process of integrating into a new environment.

Annie Fanta, a first-year at Columbia College, felt the same way. Fanta fell in love with New York when she first visited at four years old, and the city is a far cry from her hometown of Bath, Michigan. Bath has only one stoplight, one post office, and one gas station. While relatively close to Lansing, the capital, it is very much a small farm town.

Fanta explains that she was worried she wouldn't be able to handle the move to New York at first. Bath is quiet, and she knew the differences would be stark.

"Yeah, I was actually really nervous," she says. "I realized probably about a month before I left that, 'Oh wow, I've wanted to do this for so long, but what if it doesn't go well? I can't go back.'"

Not everyone is instantly enchanted by the big city as Fanta was. Abigail Grimmett, a Columbia College first-year, did not fall in love with New York when she first visited. In fact, she found it overwhelming as her dad drove through Manhattan during rush hour. But she cites this discomfort as part of the motivation behind her decision to come to Columbia.

"I think it made me uncomfortable, and I kind of wanted that. I've grown up in the same town, in the same house; I've known the same people since preschool. So I think uncomfortable was kind of what I was looking for, in a way," Grimmett explains.

Grimmett hails from Pauls Valley, Oklahoma, a small town of 6,027 that hangs well below the Bible Belt and is home to plenty of Southern hospitality. New York and its reputation for isolation and hostility loomed menacingly. This preconception of the city was also an issue for Columbia College first-year Regina Kuhia, whose hometown of Kula, Hawaii, is another world apart from New York.

"When I found out that I got in [to Columbia], I was actually sad. It felt a little bit overwhelming just having to come to a larger city. It was an easier concept to grasp than actually going through with it," Kuhia tells me with a shrug.

Arrival in New York is quickly followed by a realization that you have to look as chic as your peers, but at the same time, there's no one way to style yourself. I saw more diversity in outfit choice upon arriving at Columbia than I had in my whole life. I also noticed that many people had constructed their appearances very carefully, as if ready to stroll down the runways at New York Fashion Week.

Kuhia, who wears jeans and a nice blouse, seems to miss the more laid-back culture of T-shirts and shorts in warm and breezy Hawaii. But Fanta seems comfortable with the difference. She fiddles with her necklace and often tucks her hair behind her ear as she speaks. For her, Columbia's campus fashion was almost reassuring.

"One thing I've definitely noticed is dressing-wise, people dress to impress here. At home it was not like that," Fanta says. "And then here I was like, 'Wow, I fit in,' because everyone goes to class ready to learn, and they look nice."

Students from rural backgrounds also quickly notice differences in speech and dialect. According to Kuhia, who speaks both Hawaiian and Hawaiian Pidgin English in her hometown, the entire English language here is different. "Instead of saying, 'How are you?' we say 'Howzit brah?'" she informs me about the language at home.

The differences in Grimmett's diction are more subtle, but they certainly still come up.

While differences in appearance and dialect pose slight challenges to students from rural backgrounds, the hardest transition is in some ways the most obvious: the academic adjustment to Columbia. Small high schools in rural areas are vastly different from Columbia, a top-notch research university with swaths of experienced faculty members. Grimmett's high school had only two science teachers, one of whom had a periodic table of Jesus on his wall. Life, even inside the classroom, travels at a different speed in New York than back home for these students.

Kuhia notes that Columbia is much more competitive than her hometown, and the academic transition here has held her back from exploring her new city.

"I guess I just went in thinking, you know, I'll have fun going to Broadway shows and just getting to experience things during the weekend, but that actually hasn't happened. I've had so much homework," she says.

Grimmett acknowledges that the school cannot simply ease up on students from rural backgrounds. But all three students agree that an academically lighter first semester might make it easier for rural students to adjust to an environment with so many new cultures.

"Most of the people here I feel like just have travelled a lot more, just have seen other cultures and have a lot more respect for them," Fanta says.

Neither Kuhia nor Grimmett, for example, had met a Jewish person before moving to New York. During the New Student Orientation Program, Grimmett decided to truly immerse herself in the culture with friends on her floor.

"So I went to Shabbat dinner and they all started singing. I finally had to admit to the girl next to me, 'I'm not Jewish.' So that was interesting," Grimmett says, laughing.

While striking and somewhat humorous, none of these social imbalances affect rural students more than changes in interpersonal relationships. While much of the social landscape at Columbia is made of fragile ties with acquaintances or friends of friends, all three girls knew everyone in their remarkably small graduating classes in high school, which all hovered around 70 to 80 students. Kuhia treats everyone in her hometown as family.

"You can just approach a stranger, and you call anyone who's older than you 'auntie' and 'uncle' because they're really part of the family. Here it's just strangers, you wouldn't approach someone just calling them a family member," Kuhia says.

"I do miss knowing everyone's names, birthdays, middle names, parents," she tells me.

Rural America is more homogeneous, with fewer perspectives in any given area, so everyone can fit into the same familial community. Students are often drawn to Columbia's diversity, but it can result in a more fragmented sense of community. Kuhia works to extend some of her values from back home to those she interacts with on campus.

"I just like the comfort of knowing that a stranger would take care of me immediately and just treat me with respect all the time," she notes quietly. She tries to open doors for strangers at school in order to bring some of those values to campus.

Despite the major social differences, social life at Columbia has been a huge source of support for Grimmett, Fanta, and Kuhia. Fanta notes that without the cross country and track and field teams, her transition would have been much more intimidating. Kuhia is grateful to have been a part of the Columbia Urban Experience pre-orientation program.

"I guess after CUE ended, those were the people that helped me transition," Kuhia says.

Grimmett affirms the value of a support network to the transition. "The parts that made it more smooth were definitely my friends and the people that I met here."

Students from rural hometowns, despite the culture shock they encounter upon moving to New York City, find that their peers are happy to support them and are interested in their distinct perspectives. The intimidation factor is certainly large, but it can be diminished by a few kind words. The students I spoke with all appreciate the acceptance they have found here.

"People here are just more open-minded," Fanta tells me when prompted about whether she has felt that other Columbia students support her and appreciate her perspective. "And people do think it's interesting that I graduated with 70 kids, they think it's different. At first I didn't know how that would go over because like none of my friends, it's not like that at all. But most people I talk to want to know more about it."

While many students often ask Grimmett stereotypical questions about her hometown in the panhandle state, she says she doesn't mind it, because the stereotypes are somewhat accurate.

"I tell them I'm from rural Oklahoma and I get questions like … 'Do people ride horses?' Things like that. 'Do you listen to country music? Do you drive a truck?'"

These students from rural backgrounds appreciate others' interest, and Grimmett is willing to answer their questions. The curiosity can be refreshing. I will talk to anyone about New Hampshire for hours, even if their initial views are stereotypical, if only because I know that it is an underappreciated state.

Talking to someone else from my home state can help with homesickness. Fanta says she loves to meet people from Michigan to talk about common experiences.

"I think it would be super fun to somehow meet people from the same state. Because I remember when I was here the first week for NSOP and I met someone from Michigan I was like, oh my gosh, and we started talking and we just kept talking for like 25 minutes just about Michigan, where we live, and so that was really comforting," Fanta says.

Dorothy Gale's trip down the yellow brick road was full of fantastic new sights, but at times she seemed a bit bewildered by it all. Her new friends supported her with linked elbows and a synchronized march, bringing a smile to her confused face.

Most importantly, her companions never questioned that an unassuming girl from Kansas, a world they've never seen, was worthy of their wholehearted friendship.

"I'd say that's really nice here," Fanta says. "That everyone just comes from different places and that everyone likes that about each other."