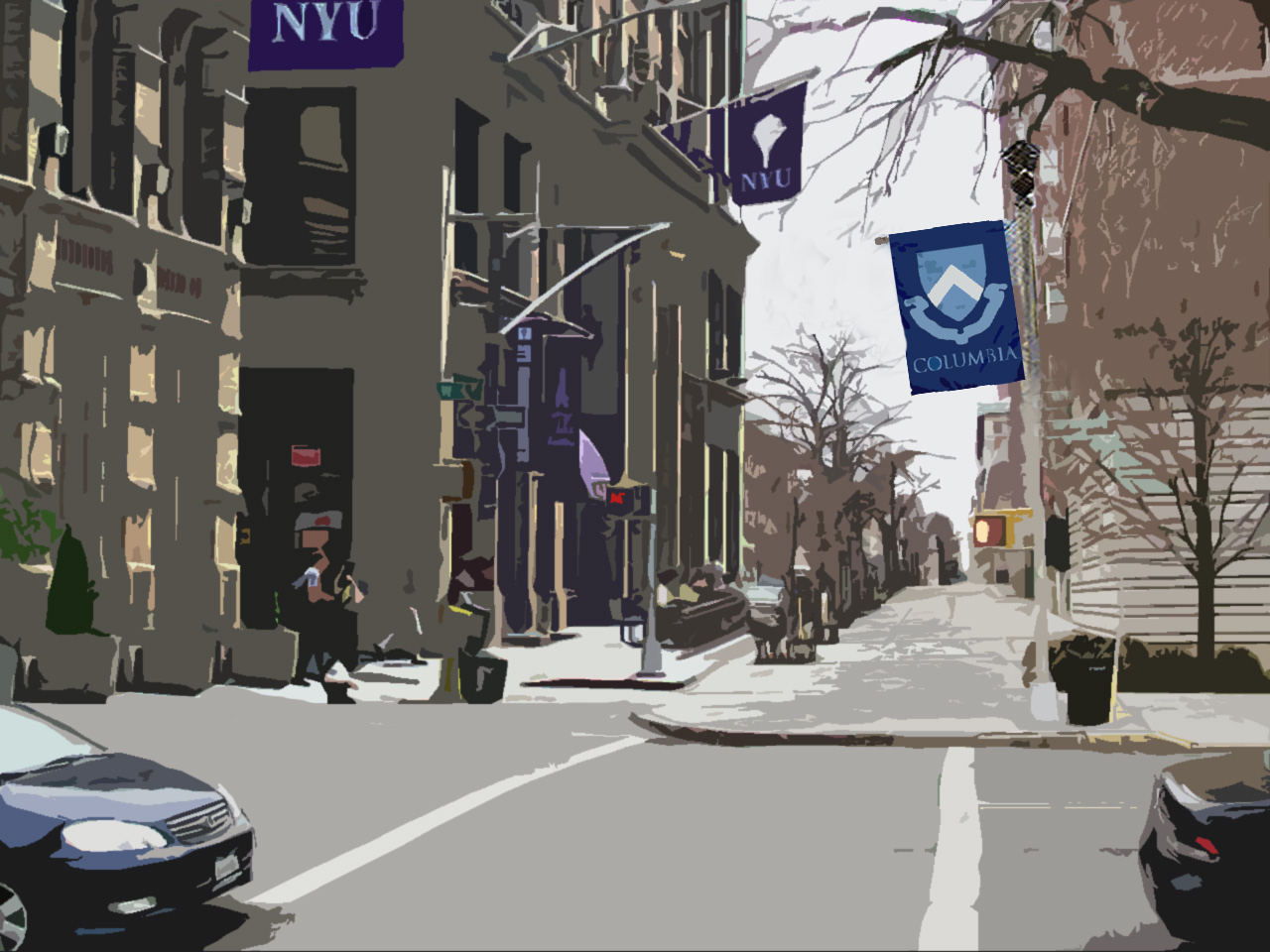 "What's amazing here is that they really care for you," Columbia College junior Sarah Park says about Columbia.

Park and I sit in the lobby of Broadway Hall as students carrying thermoses pass by heading to their 8:40 a.m. classes. Their caffeine-fueled slog contrasts strikingly with Park's sincere positivity about her Columbia experience. She's grateful not just for the quality of academics she transferred from New York University to find, but also for the support she has received from an administration often caricatured as distant and draconian.

"I was sick and had to take a medical leave, and the disabilities service [at Columbia] was great," Park says. "Everything's met my expectations."

Her perspective on Columbia is molded by her experiences at another well-known college in New York, a hundred blocks south of Morningside Heights by Union Square. Park is a part of the sizable annual exodus of NYU transfers to Columbia—students with prior knowledge of how to live and learn in New York, albeit in very different geographic and social circumstances. Park says six of the 50 transfer students in her class were also from NYU.

For students like these transfers, traveling uptown to what they describe as NYU's self-designated nemesis also entails leaving prime and lively downtown New York real estate in favor of what is Manhattan's relative countryside: quiet and uneventful Morningside Heights. They expect later weeknights, fewer parties, and more work. How they adapt to the environmental change—beyond the obvious academic shift to the Ivy League—is less certain. Park lauded the support she received from Columbia during her transition, but not all NYU transfers say that their switch was so smooth.

For Christina Park, a junior at Columbia College studying political science, the decision to transfer schools was a statement—a performative expression of her identity as a serious student. When she arrived at Columbia, she realized that identity was not as solidified as she believed.

"You expect to come and for things to be impossible," Christina Park says. The reality was that her peers were smart, but she was able to adjust. "I thought I would feel super inferior to everyone else and I would have a really tough time with the class work, but I actually haven't found that to be the case."

Things worked out in the classroom. What she was surprised by was just how different things worked socially at Columbia—how pervasive the stress culture was and what that meant for how she interacted with other students and her friends.

"At NYU I was considered super serious, at least within my suite, that is," Christina Park says. That might have had something to do with the personalities of her suitemates—she says that they would routinely party on Tuesday nights. "Here, I'm like the overly relaxed one, so it's kind of a weird transition to go from the opposite ends of the spectrum."

Sarah Park is straight to the point in explaining her decision to transfer. Like Christina, she felt like she needed more of an academic focus, one that would balance out the pressure to party and make social connections which she thought characterized student life in the West Village.

"My friend and I felt the classes were too easy at NYU. We were able to study the day before and do fine on the final," Sarah Park says. "We wanted more of a challenge."

She had never been to Morningside Heights before, and her decision to apply to Columbia was mostly driven by the fact that she could stay in New York and attend an elite university. Uponher acceptance, she braced herself for a fundamentally different college experience.

"You prepare for the worst but expect the best," Sarah Park says. "I expected everybody here to be genius, Einstein level. But really it's been great to settle in and figure I have a place here."

The University coordinates student meet-and-greets with other transfer students that made meeting people for Sarah Park simple enough. Columbia's traditional campus structure also made it easier to make friends compared to the decentralized social anarchy of NYU's urban campus in the West Village. But after the initial excitement of the first few days, Sarah ended up mostly meeting new people either while studying or through her classes. She says that Morningside Heights can sometimes feel constraining, because there's not much to do. Sometimes this can be helpful.

"In the West Village, it's great because there's all these restaurants and stuff. Here it helps you focus because there's not really much to do outside," Sarah Park says.

For Lilia Jimenez, a Columbia College junior, that change in neighborhood has been perhaps the most noticeable structural factor in the different social and cultural encounters she has had at NYU and Columbia. That's partially what she wanted from college. Jimenez was born here in the city, and she wanted to have an identifiable physical space she could call home.

"I didn't like how massive NYU was and I wanted to have a more 'traditional campus' college feel," Jimenez, currently studying abroad in Australia, writes via email. This desire was important enough to her that she applied to Columbia despite fears that her peers would be privileged, arrogant, and politically hostile. "I wanted to feel more like I had a college campus rather than just going to school in the city."

To an extent, some of Jimenez's predictions about Columbia's student body came true. She thinks that many Columbia students are more politically correct than her classmates back at NYU, even if she observed less of a superiority complex than she expected. But she does find the savvy New Yorker attitude some students here project amusing.

"Everyone wants to believe they have made NYC their stomping grounds, but I also noticed people don't really explore all of NYC. They just do tourist-y things," she writes.

On the onset, Sarah Park noticed an interesting corollary between Columbia's community and its student body. Despite being "in New York," Columbia still remains walled off from the city. Its borders are demarcated from the Morningside Heights community by Amsterdam Avenue on the east and Broadway on the west. The Hudson River lies between Columbia and New Jersey while Morningside Park separates the school from Harlem. Compared to this, NYU is chaos—its campus-less buildings strewn across an already hectic West Village. And according to Sarah Park, the student schedules at both schools reflect this dynamic.

"At NYU, it's more about partying and the social networking," she recounts. "A lot of students just focus on other things."

For her, this structural flexibility came at the expense of dedication to academics. But not all NYU transfers think their classmates are missing out. Some NYU students have an entrepreneurial spirit that is lacking in the intense academic focus at Columbia.

"The students at NYU, I feel, are more go getters," writes Jimenez. "They're in the city and are working and doing a lot more creative things like working on film sets, NBC, or SNL. … I just feel like NYU students are more involved with the culture of NYC and are far more creative, rather than the busy body culture of corporate NYC."

Prior to enrolling at Columbia, Jimenez had never gone north of West 86th Street. And having grown up in New York, she has a more down-to-earth perspective about the city's marketed image.

"I'm not into the whole hustle and bustle of the city and the rushed and always nervous and high anxiety city life, because I'm used to it; this has been my life for my entire 20 years of existence," she writes. Despite her aversion to the downtown rat race, the West Village has a powerful pull for Jimenez.

She still maintains an active social relationship with her former NYU friends, escaping the Morningside bubble to visit them on weekends. However, this is a one-way journey. "My friends don't visit me … all of the happening places are either in their area or closer to them than Columbia is."

This habit of straddling two communities on opposite ends of Manhattan isn't unique to Jimenez. Christina Park speaks about the cultural challenges adjusting to Columbia from NYU in light hyperbole, couching her jokes by emphasizing: "I don't want to sound like a terrible person."

While her academic transition was manageable, Christina Park was turned off by the cliquishness she found in Morningside Heights. She had expected arriving at Columbia as a junior to be similar to NYU first-year orientation, not realizing people had already formed into little groups.

"At first I was thinking, should I just transfer back?" she says about this time. "It just wasn't very fun yet, because I didn't know anyone. It was a lot of coming back from class, doing work, and being like, 'Cool, that's great.'"

To adjust, she got involved in multiple clubs and student groups mostly centering around leadership, student government, and later she joined a sorority. She yearned for a sense of community—a feeling of inclusion that would validate her choice to switch schools.

"I have a ton of LISTSERVS that I'm no longer on," she says. "I was just applying to things and seeing what would stick."

Asked when she began to feel settled in, Christina Park pauses a moment to think.

Though the first few weeks had felt tough, as the first semester continued, she had begun to get a feel for a daily routine. She met many of her friends through the Ivy Leadership Summit, an annual conference intended to promote dialogue between student bodies across the Ivy League.

"If I'm going to be very specific about a timeline, I would say March," she says about when she felt settled in to Columbia, "but I got there, so I guess that's all that matters."

Christina Park has no regrets about the indirect path she took to Morningside Heights, even if it meant forgoing two years of Columbia's academic environment. "Even if I went back, I don't know if I would want to go straight to Columbia. Even if I was in high school, I'm not sure I would've applied. … It's really nice having both experiences."

For students like her, NYU's location served as a crucible, a personal proving ground.

Stuck within the enclosed bubbles of Columbia and Morningside Heights, it's sometimes easy to forget the proximity of campus to the world's premier city. But inculcated in the West Village culture of barely-contained mayhem, NYU students have proven they can handle any obstacles, anywhere. Even at Columbia.

"In the West Village … that's what you think about when you think of New York 'the city that never sleeps,'" Christina Park says. The turbulent pace of life downtown helped prepare her to come into a new school in a totally different neighborhood and succeed.

"At first I was like, 'I hate it here, and why did I transfer?' But now I love it here, even better than I did at NYU."