Finding Art in the Unfinished

Finding Art in the Unfinished 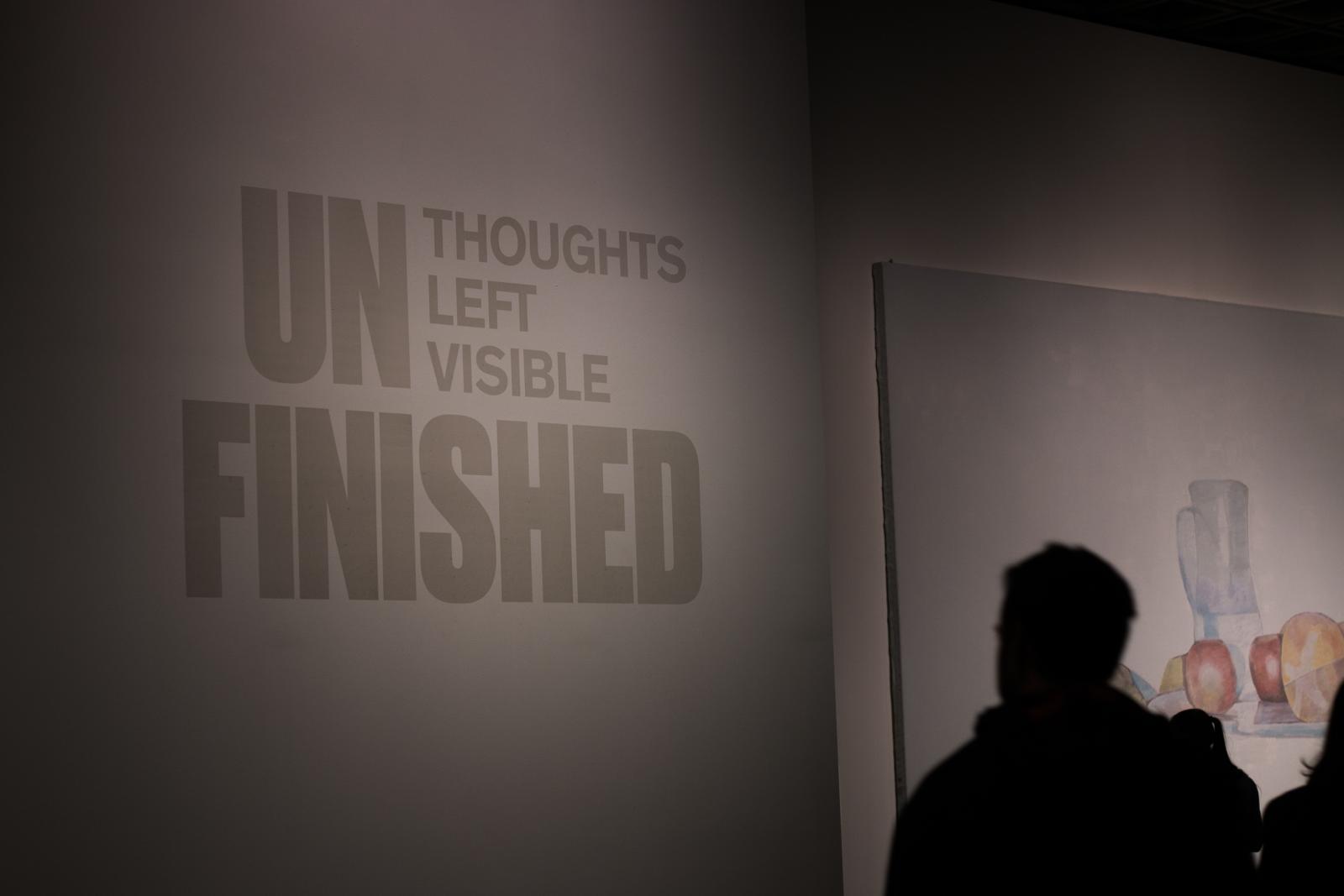 I walked through the doors of the Met Breuer, the new contemporary outpost of The Metropolitan Museum of Art, expecting to see works of modern art lining the walls. But what I saw instead was the 500-year-old The Flaying of Marsyas by Titian. It is a powerful, dark, frenzied painting of a gruesome scene: Beasts and humans take pleasure in the slow and painful tearing of human flesh. The figures gather around the satyr Marsyas, skinning him alive for arrogantly challenging Apollo to a contest of music.

"Contemporary" is hardly the name I would have thought to give such a painting. But with its exhibits at the Met Breuer, The Metropolitan is embarking on a quest to understand contemporary art by exhibiting works from the past, like The Flaying of Marsyas, alongside newer ones. The idea behind having such a far-reaching collection—spanning from the Renaissance to the 21st century—is to understand present works of art through a historical lens.

The Met Breuer's first exhibition, "Unfinished: Thoughts Left Visible," touches upon a controversial subject in the art world: unfinished, or seemingly unfinished, works of art, the public display of which might not necessarily align with the artist's intentions - remember Max Brod's famous refusal to burn the works of Franz Kafka after the novelist's death. Each one of the 190 pieces displayed in the exhibition was either literally left unfinished, abandoned by the artist, or intentionally left unfinished in adherence with the non finito technique.

The Flaying of Marsyas, I soon realized, was a perfect example of non finito, in which an artist purposefully fails to illustrate or sculpt some aspect of a work in order to highlight other features by omission. Titian, known for his appealing renderings of human forms, completed the intricate features of Marsyas and Apollo's laurel crown, but he left other parts of the painting ill-defined. Although he signed the painting, it was still in his workshop at the time of his death, thus leaving room for speculation about the work's possible incompleteness. 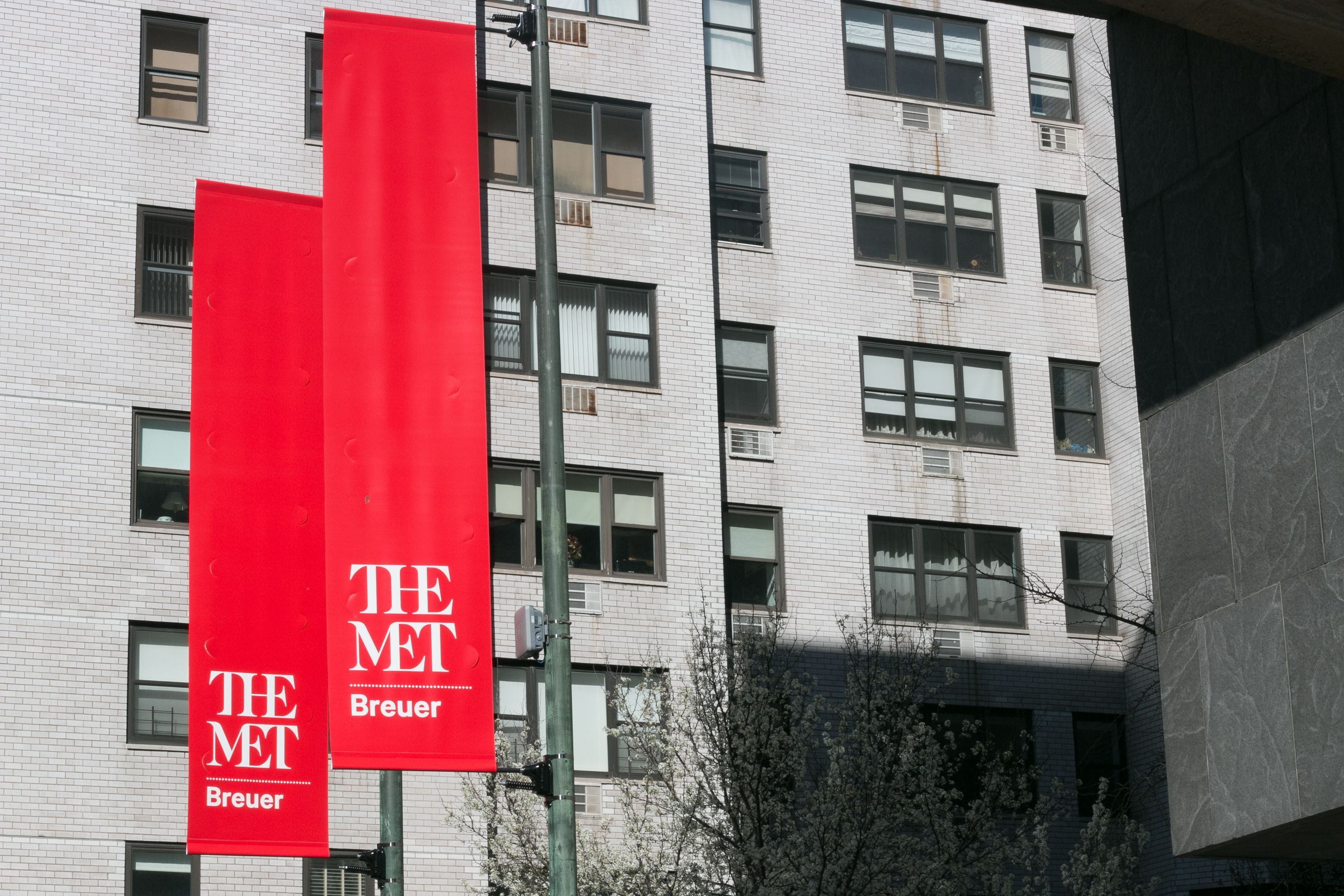 On the one hand, incomplete art reminds viewers of the artist's humanity—they were limited by time and creativity in the same way as their audience, and this creates a sense of intimacy—but on the other it negates the artist's power to express their vision by displaying their unfinished works to the world.

For the viewer, the incompleteness of an artwork can prove to be a starting point for an open-ended conversation with the object.

Parul Guliani, a friend of mine who graduated from Columbia College in 2015, walked through the exhibition with me. She believes that the objects' incompleteness gave them a certain relatability usually absent from art: seeing for herself that the great masters were human, just extraordinarily creative.

"Seeing a painting that isn't fully complete forced me to engage with it," she explains. "It made me aware of the fact that there was a real life person who painted it, the artist is more present in such paintings." In this way, the imperfection of an artwork provides space for a fluid conversation between the observer and the object to materialize.

Kellie Jones, an associate professor in art history and archaeology in the Institute for Research in African-American Studies at Columbia, explains how unfinished artwork could prompt the observer to think about the process of its creation.

"Because you see the work of art unfinished, you think more about the process and that takes you back to the artist. In other words, how it's made. Looking at the amateur work, as it were, brings you back to the person who made it," Jones says.

"That way the artist is made more present. Whereas, if you look at something finished, you either revel in its beauty or think about things you don't like about it. You're kind of divorced from the maker, but the unfinished actually takes you back to the maker."

While incomplete artwork may force viewers to consider the artist behind artworks, it also opens up new possibilities for the viewer as they try to fill in the gaps of the artwork without knowing the artist's true intention.

Guliani experienced this sort of open-endedness when examining a painting by Honoré Daumier, The Third-Class Carriage, depicting the quiet fortitude of third-class railway travelers.

"I think I have seen this painting before, and I thought in the 1860s for someone to paint that was kind of revolutionary, but looking at this painting in this particular exhibition made me wonder about the powerful impact the painting had on me while it is still incomplete. I wonder what would happen once it is completed," Guliani explains. 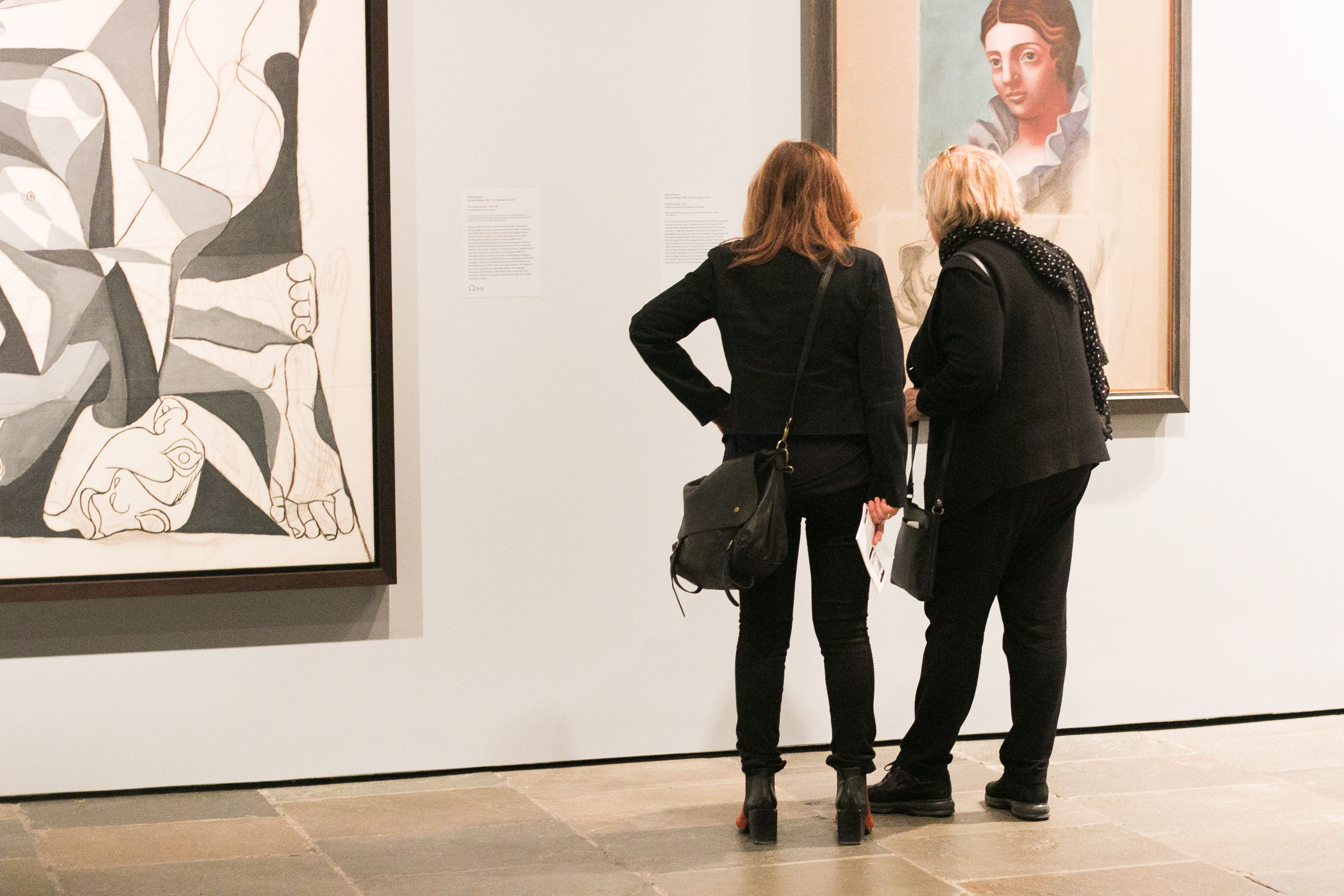 Guliani was not the only observer who was enticed by an intrinsic artistic urge to complete the incomplete. When I went to the exhibit, I spotted an observer vigorously doing calculations in front of an animated artwork La flecha de Zenón, also known as Zeno's Arrow, by Jorge Macchi and David Oubiña. As he worked, he explained to passersby the unsolvability of the mathematical conundrum of the dichotomy paradox, developed by the Greek philosopher Zeno, which was represented in the artwork.

The unfinished quality of the artwork opened up a variety of personal responses to each piece, widening the scope of possible interpretations. As I strolled through the exhibit, it was extremely interesting to observe the idiosyncratic reactions of different viewers evoked by the same piece.

For instance, I witnessed a disagreement between a husband and wife about Benjamin West's American Commissioners of the Preliminary Peace Negotiations with Great Britain. The painting depicts the meeting at which America signed a treaty ending the Revolutionary War and declared its independence from Britain. However, the painting was left unfinished because the two British representatives, Richard Oswald and Henry Strachey, refused to sit for the portrait as the treaty was a sign of defeat for the British.

The wife was touched by the painting, seeing it as an expression of patriotism, while the husband thought of it as a representation of British political dominance over America at the time. He explained to his wife how he thought the painting captured the uneven historical power dynamics between the two countries. 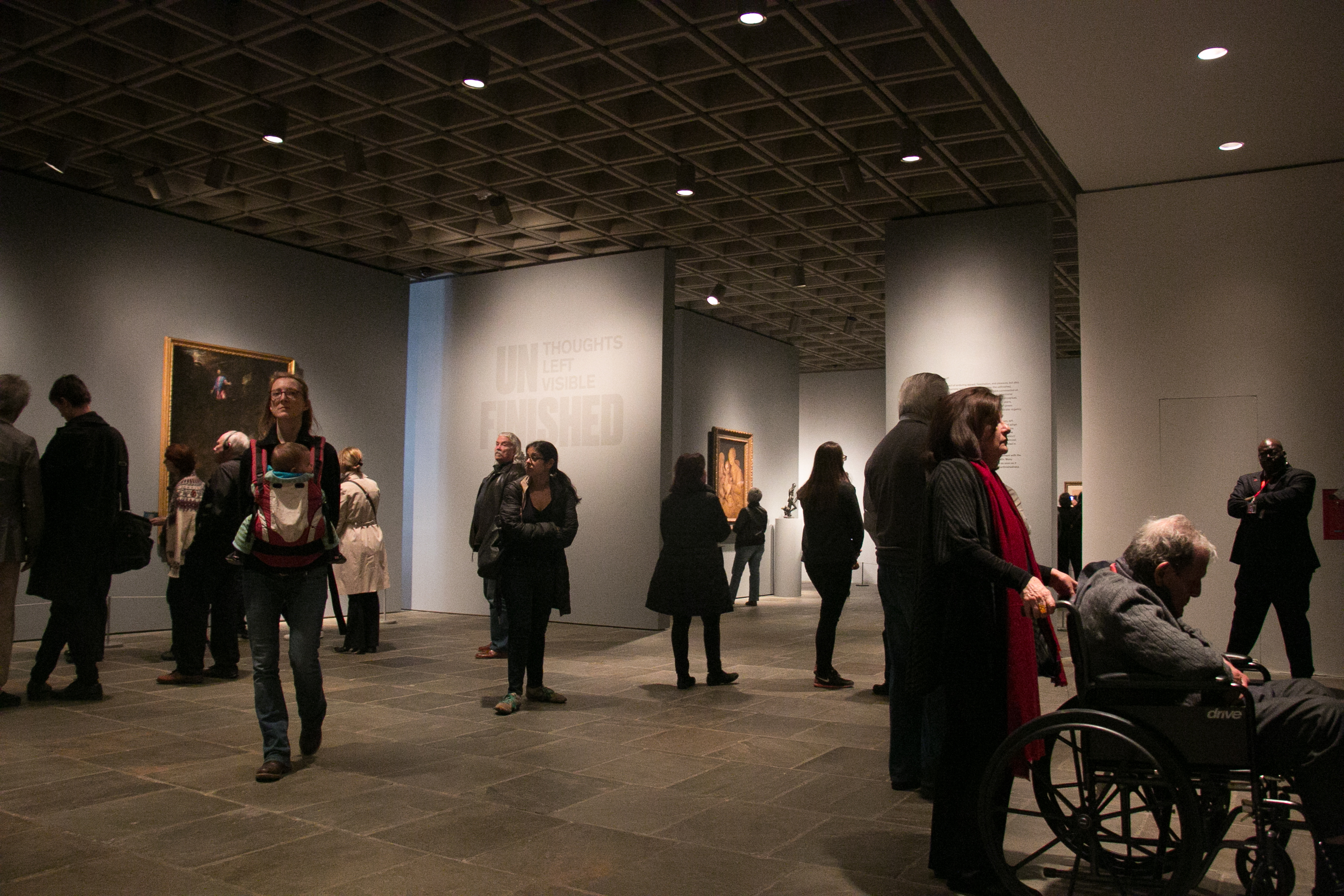 Peter LaBier, an MFA candidate at Columbia's School of the Arts, believes that the conversation between the viewer and artwork essentially completes a piece of art. He had me complete a quick exercise to understand what he means.

Taking out paper and crayons, LaBier tells me we will draw portraits each other's faces on individual sheets of paper according to a certain specific set of rules. One of us will have to pick a color, and the other would draw a line with that color, switching roles for each line. We finish drawing about 3/4 of the portrait when LaBier realizes he is running late for class, so we are forced to abandon our works of art.

I realized from the exercise that the unfinished portrait would always remind me of this particular experience, but the same portrait would evoke a different reaction. LaBier explains to me during our conversation that a work of art can be seen as a fossil record of human existence—something to be deciphered or decoded by viewers. And that especially applies to unfinished art: so it was something of a serendipitous coincidence that we did not have time to finish our portraits.

The decoding process that LaBier describes helps explain the drives of viewers to fill in the unfinished artworks: They are attempting to find the elusive record of the humans behind the art. But for some visitors, this speculation only resulted in frustration, forcing them to confront the fact that the artwork never brought fully realized into the world.

Guilani, for example, wondered about how we should treat these unfinished artifacts—could they be analyzed in the same way normal artworks can?

"Sometimes it looked liked the person just lost interest in it or got bored of it. You really can't tell, and it depends from painting to painting," she says. "And that brings up the whole question of what unfinished is, right?"

When I ask LaBier whether he would be comfortable showing his unfinished work of art to people, he responds by saying that the question relates to a lot that happens in the MFA program. He explains that the nature of the program is such that they have constant visits from faculty looking at your work.

"There is no way that you can show finished stuff all the time," he says. According to Jones, this is a part of the training process of the MFA program.

LaBier elaborates on how the constant pressure to produce something affects the natural process of flow of creativity.

"I do feel it bothers me because it shuts things down for me a lot, and I actually stop painting for a while," he says. "A part of it also has to do with the economics of things, about capitalism and being a part of it in a big way. Like all things in this world have become sellable."

He believes that the pressure to constantly produce, and the need to be marketable, reduces an artist's agency and control over his work. 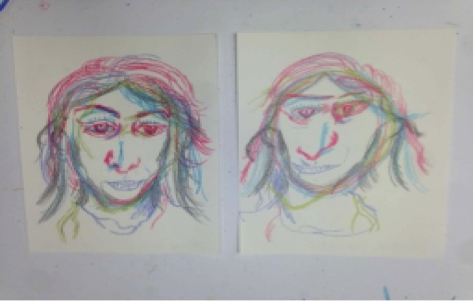 LaBier's reaction to my question makes me wonder what the opinions of the artists from the Renaissance period would be if they ever saw their incomplete creative works opened to public display. This directly raises a question about the ethics of the Met Breuer's exhibit itself.

Seeing the artworks lining the wall reminded me of how I felt when I didn't finish my portrait during the exercise with LaBier. Before rushing off to class, LaBier said he would sign and mail me a copy of the portrait as a gift, but I secretly wished I had gotten the chance to finish the work of art. Realizing the artwork was out of my control made me think of the artists behind the unfinished works of art in the exhibit.

Whatever the ethical ramifications of The Met's decision to display unfinished artwork, it definitely left an impact on its viewers. I remember while walking around the museum, looking at some of the amateur works and rough sketches of some of the greatest painters such as Cezanne, Picasso, and Titian, I was transfixed by the rawness captured in the frames. The unfinished paintings reminded me of the imperfect nature of humans.

But for my own sanity, I'd prefer to pretend I have control of my art. LaBier and I met up the next day to finish our portraits.