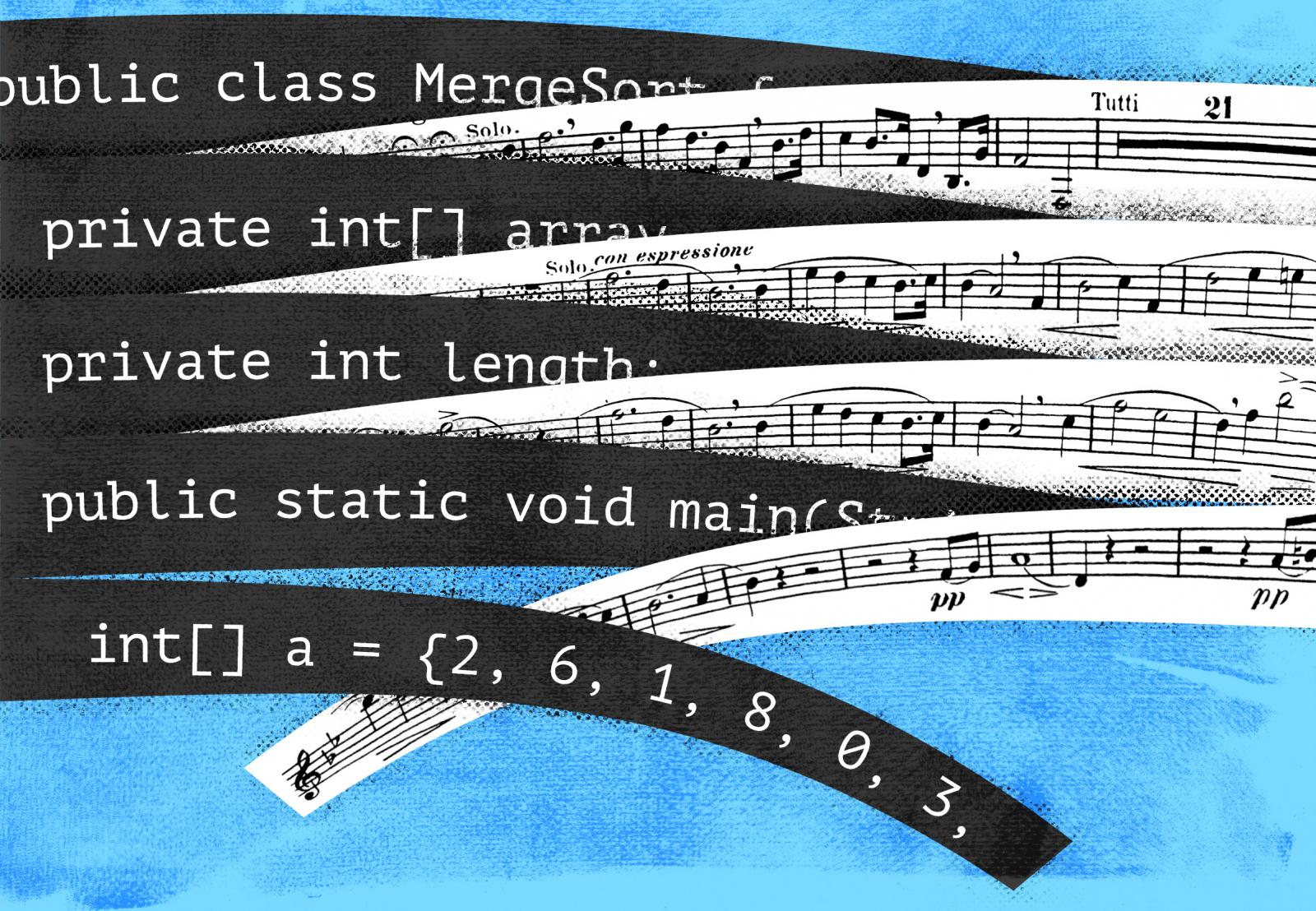 When I first met Columbia College first-year Elena Ariza in Butler Lounge, I was struck by how much she seemed to physically embody the Barnard-Columbia-Juilliard Exchange: On her typically Columbian Pantone 292 MacBook cover was this week's Intro to Computer Science problem set, and emblazoned on her shirt were those hallowed words: "Juilliard Music." Self-described as someone who is "not sure whether she wants to go into music or computer science," Ariza certainly came to the right place.

The Juilliard School: It's a name everyone knows—a pinnacle of music education excellence. The prestige of the school is established by its world-class faculty: Students are bumping into Emanuel Ax—the concert pianist who has earned standing ovations in halls throughout the world—on their way to their music theory classes; they're working with Wynton Marsalis—the fast-playing, virtuosic jazz trumpet player and artistic director of the Jazz at Lincoln Center Orchestra; and at times they're even waiting in line behind Glenn Dicterow—whose recently ended 34-year tenure as concertmaster of the New York Philharmonic made him the longest-serving concertmaster in the orchestra's 174-year history—at the nearby Starbucks.

These interactions happen because Juilliard students—and by extension, Barnard-Columbia-Juilliard Exchange students—were accepted to be taken under their wings: to learn from these world-class musicians with the ultimate goal of one day being where they currently stand.

But this goal simply isn't true.

Musicians in the BCJ Exchange do not all come into the program intending to become professional musicians. (In fact, every musician I talked to this week—graduated or otherwise—was unsure back in their first year about whether they wanted to pursue music or another field after college.) In many ways, it's an intuitive indecision. After all, if music had been their primary professional ambition, they may have only applied to Juilliard, where they could have focused solely on their music studies. (Although there is no guarantee that even full-time Juilliard students will pursue careers in music.)

Students in the BCJ Exchange are, like most of us, grasping at old and new interests, trying to find their professional route. The exchange program gives Columbia students the opportunity to study an instrument or composition privately at Juilliard as well as play in chamber music groups or jazz combos. These exchange students also have the chance to apply to an accelerated master's program at Juilliard after their second year, which would give them a chance to earn a B.A. from Columbia and an M.M. from Juilliard in five years (the so-called 3-2 or 4-1 program). And even though students in the exchange are granted the time and flexibility to discover their career paths, studying at Juilliard—a world-class conservatory with the primary purpose of training professional musicians—is rife with particular expectations and pressure toward becoming a professional musician.

Paul Bloom, a Columbia College senior who studied jazz piano through the BCJ Exchange and is currently majoring in neuroscience, was never explicitly told that he should have the career goal of being a professional musician. "There were a lot of implicit expectations—[the faculty] made references to, 'Oh when you're going out to these jam sessions every night or when you're trying to play these gigs—I know you want to play with this person,'" Bloom remembers.

Despite these apparent pressures, however, not all faculty members at Juilliard expect their students to become professional musicians. Kimberly Hou, a BCJ Exchange pianist who graduated from Columbia College in 2016 with a bachelor's in neuroscience and who will graduate with a master's in computer science from the School of Engineering and Applied Science this year, notes how her Juilliard piano professor was extremely supportive of her interest in computer science.

"He would often actually think of app ideas with me during my lessons and he would say, 'Wouldn't that be interesting?' and I'd say, 'Absolutely!' Pretty lucky that things worked out on that end because it does not always—it really does not always," Hou says.

Tracking the interests that Hou pursued during her time in the BCJ Exchange is striking—the breadth of her work is vast and diverse. She's been a music major sitting in a chromatic theory class, a neuroscience major working as the VP of Columbia Organization of Rising Entrepreneurs, and a product management intern founding and leading Columbia Pops.

"The exchange gave me that opportunity: to stick to what I was comfortable with to the extent that I wanted. It gave me all of that freedom," Hou explains.

Had it not been for the BCJ Exchange, though, it could have gone either way for Hou. "I could have spent as much time over at Juilliard with those peers, be it in chamber ensemble groups—as much I wanted to—and go to studio classes. Or I could have stuck to only academics," she says.

Because of the exchange, Hou had the freedom to decide where to spend her time. Nowadays, Hou is pursuing an M.S. in computer science from SEAS with the goal of one day working as a software engineer or a product manager.

But the freedom that the BCJ program offers works both ways; many students in the exchange discover they do want to continue with music after college.

Ken Hamao, graduated from Columbia College in 2011 with a degree in economics and psychology and got his M.M. from Juilliard in 2012 through the joint program. He is currently a violinist in the Enso String Quartet and in new music groups—groups dedicated to performing contemporary classical music. Hamao's moment of realization—that making music was his main focus—came while playing and learning sonatas with a fellow student musician at Columbia.

"I do remember the turning point being working on some sonatas with—for the first time—a pianist of my age," he explains. "Somebody I could just hang out with and also work on music. There wasn't any sort of, 'Oh, we need to reserve two hours' at pockets [of time].' It's, 'You're free?' 'Yeah, let's get together.'"

Playing the sonatas was musical training that Hamao found influential on his path toward his career as a professional violinist in New York City. Yet, it is important to note that his sonata experiences were with a Columbia pianist—not a Juilliard student: He would have had the same musical development experience at Columbia even if he wasn't in the dual degree program. In actuality, Hamao might have still been able to become a professional musician without the program.

"I did Columbia early decision, so I got in through that, so I had to go to Columbia no matter what. So the Juilliard part was maybe, if it happens, it happens, if it doesn't happen, fine," Hamao recalls.

What was more important to Hamao was not getting into the dual degree program, but rather learning from the teacher he thought best for him.

"The idea was to take it privately, but the main focus was college," Hamao explains.

Hamao's musical path of playing in a chamber music ensemble and in new music groups throughout New York is one of the traditional ways current classical musicians earn their living. However, some Columbia musicians prefer a different path.

Unlike his fellow Juilliard-educated cellists who are auditioning for the same few spots in orchestras across the United States, Nathan Chan, who graduated from Columbia College in 2014 with a degree in economics and got his M.M in 2016 from Juilliard in the joint degree program, is spending his year working on a collaborative creative project in Garden City, Kansas.

Chan is defying the standard career route—an orchestra job, freelancing in new music groups, playing in a chamber ensemble—that is expected of him as a classically trained cellist.

"[The exchange] greatly influenced the way I pursue my creative process. Currently, I am actually in Kansas, in Garden City, working on this amazing creative project called the Arts Fusion Initiative, in which we put together a program based around a poem." Chan explains. This year, the poem is Walt Whitman's "The Sleepers."

"We combine music, dance, spoken word, and acting; I guess we could say my Columbia experience influenced my interest in out-of-the-box projects like these. I definitely think that set me apart in the way I approach creative projects as to opposed to some of my peers."

The BCJ Exchange's impact on Chan's creative ideology was apparent even during his time at Columbia, where he spearheaded the creation of one of the school's most famous performing arts groups: String Theory. He calls co-founding the cello ensemble "one of [his] proudest achievements while at Columbia."

"What started as just midnight readings turned into, 'Hey this sounds really good, why don't we form a band?'"

String Theory blossomed out of NSOP sight reading sessions into a music phenomenon reaching beyond Columbia's gates; the musicians strapped their cello cases onto their backs to play at events including Google's Zeitgeist and at Johnson & Johnson.

Creative careers can also extend outside of the concert hall for BCJ Exchange students. Bloom, for instance, has discovered over the past few years his desire to perform innovative musical psychological research. Over the summer and into this semester, he has been working on the connection between the popular songs of someone's childhood and their ability to perform well on memory tasks.

"The childhood music project is something I'm really excited about and looking forward to research—psychology, neuroscience research involving music, and other systems like memory and plasticity and other styles of development. It's really interesting to me," Bloom explains.

His work is a literal combination of his two college educations.

Bloom's research focuses on analyzing the link between memory recall and music, which is especially relevant for patients with Alzheimer's. (He recommends the documentary Alive Inside as a good introduction to the topic.) Through his psychology- and music-based research, Bloom hopes to find concrete societal benefits—unlike much of the prior research in the field.

"For the last couple of years, I've been trying to find ways to do research that is looking at the neuroscience of music in a way that is important—in a way that can contribute to something that can help us," Bloom tells me.

"It's far from there now, but I'm hoping that at some point we will have figured out the answers to some of those questions about the effects of hearing music from earlier in your life. How is it activating memories and triggering different brain states that might be possible?"

Learning about Bloom's and the other students' years as BCJ Exchange students proves that they are able to use the resources the program offers them to explore their interests until they find their own field to pursue—whether it's music or another area—enduring the expectations, workload, and pressures Juilliard places on them to become professional musicians along the way.

The new student sitting in Butler Lounge with the light blue laptop, first-week jitters, and a nervous smile has a lot to look forward to as a Columbia-Juilliard Exchange student.