Senior Year and Its Spectacular Skies

Senior Year and Its Spectacular Skies 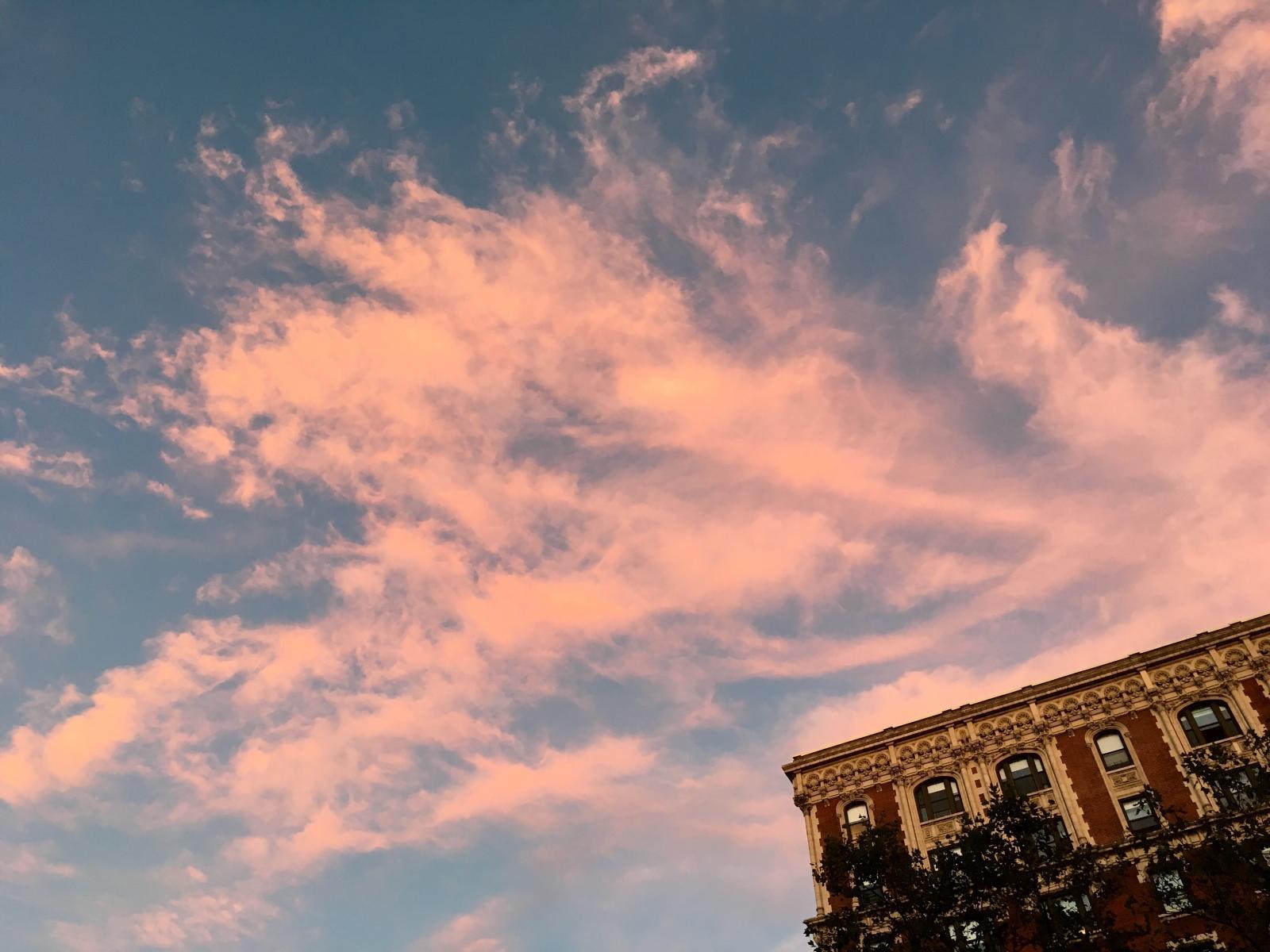 As summer transitions into fall, the skies are spectacular, the sunsets dramatic. A sunset is beautiful, according to the wabi-sabi aesthetic, precisely because it comes to pass. Yet there is an inescapable banality to one beautiful sunset after another. When something transient becomes routine, repeating day after day, how do we savor it?

Away from the sun

My older friends tell me to enjoy my senior year. They speak with the same authoritative tone they once used when they urged me to enjoy my first year at Columbia. Back then, I distanced myself from the freshman hype in the same way many refrain from capturing sunsets, however spectacular.

I told myself I was excusing myself from overhyped banalities, but in retrospect I avoided some first-year rites of passage because I was intimidated by them. And so, I passed on parties that I assumed would be too sweaty. I avoided the advances of boys, whom I assumed would be insincere.

Rather than pursuing what I thought was the freshman year ideal, I took it all in slowly. Meandering conversations at Low Steps. The Manhattan skyline as seen from the rooftop of Mudd. The swings along Riverside Park. A film festival. A play. Hell's Kitchen. The East Village. Chelsea.

Ultimately, instead of seeking out the sunsets, I stumbled into them. 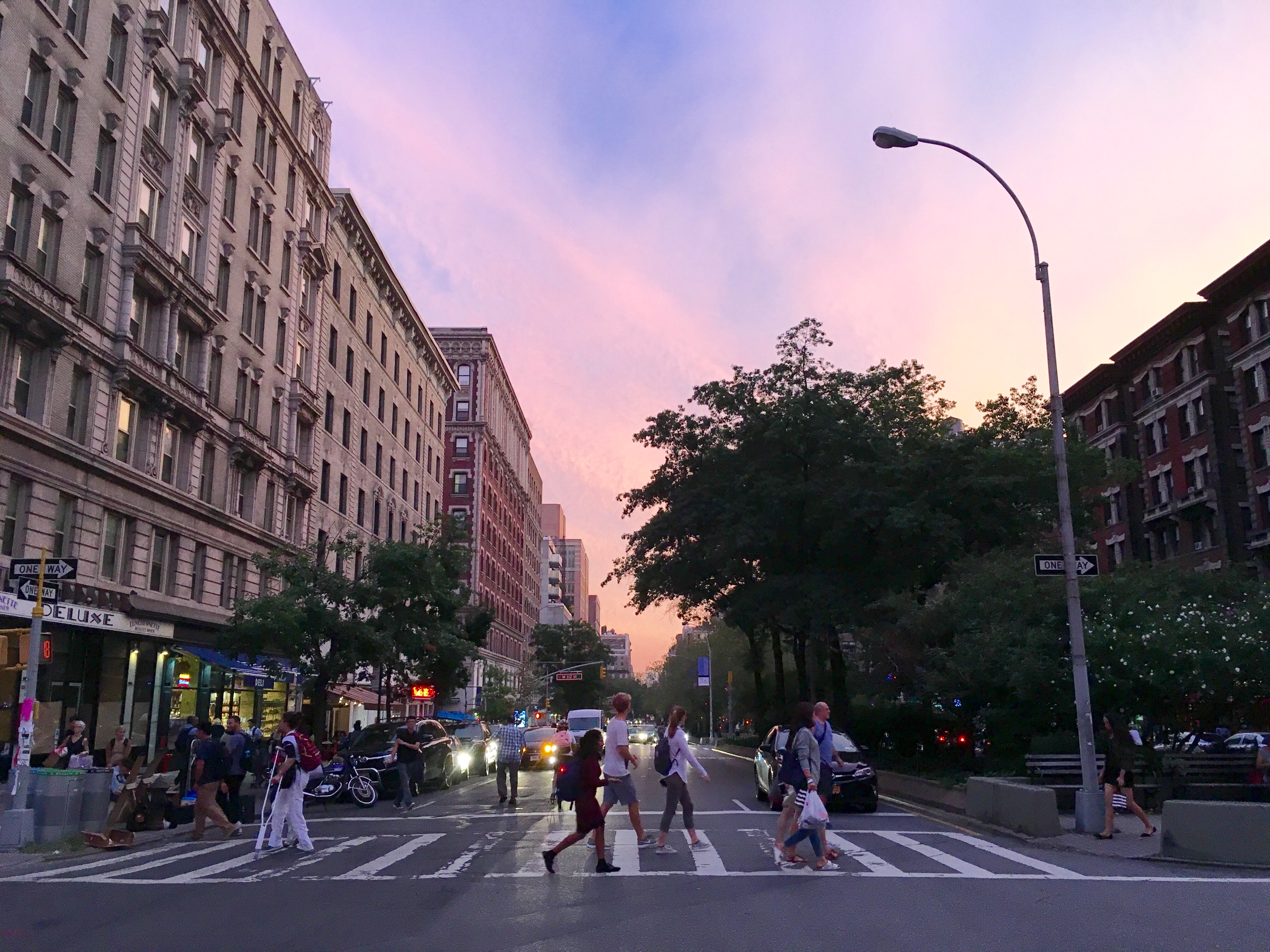 At first, I was happy to bask in the sunsets that came my way. If there was something beautiful in what I saw, I took a few photos. Then, I allowed my mind to wander.

But what happens when you begin to demand more from the sky?

One day, my editor Kara texts me a view of the sunset. In her photo, pastel purple light reflects from the white exterior of Uris Hall. Minutes later, I hear my suitemates shout, "Tiffany, sunset!" down the stairs. The sky is turning orange from our living room window facing east. 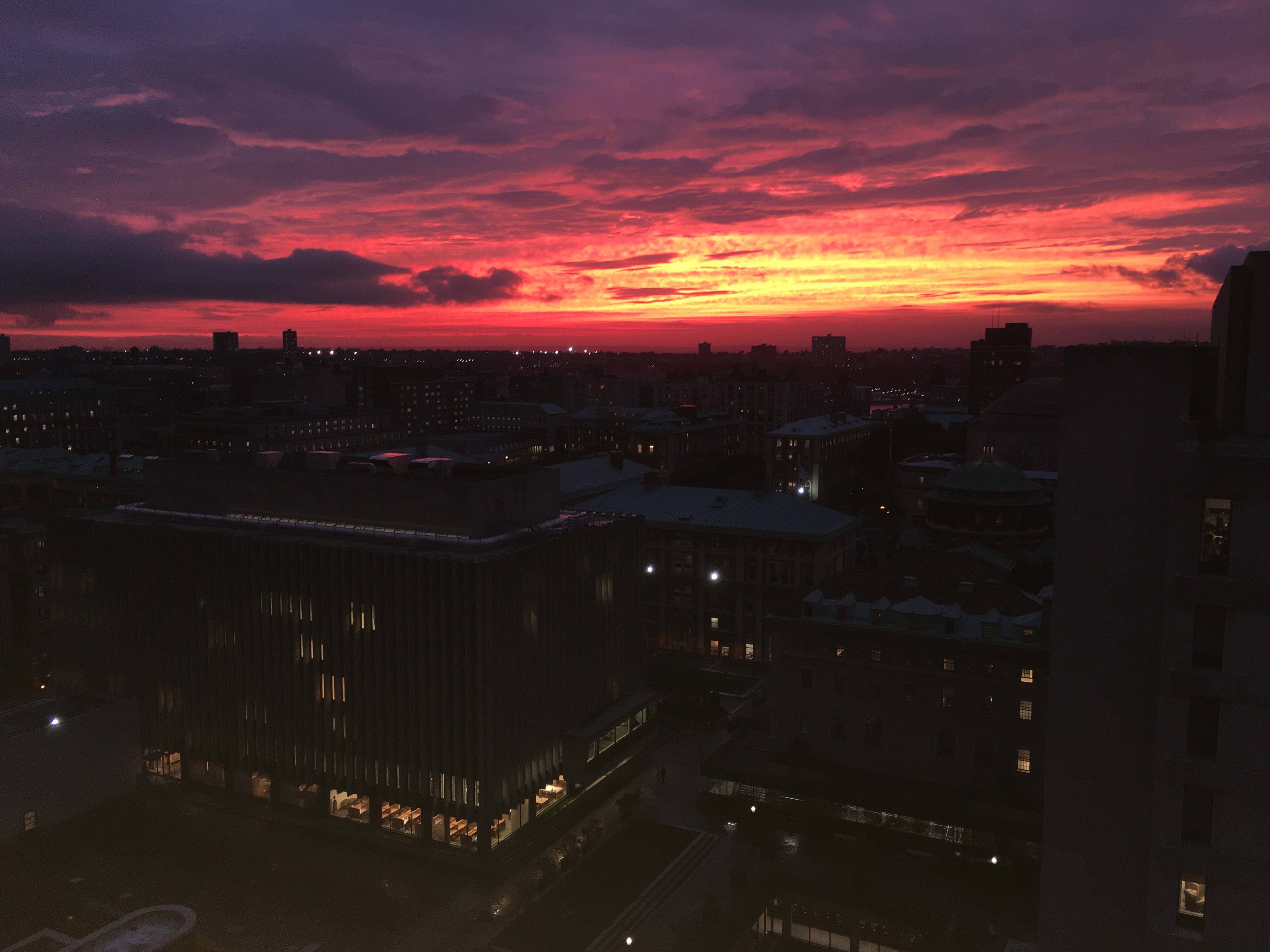 I want to run westward toward the setting sun, where the colors were most vivid and intense. But I also want to see the soft and ethereal light where Kara was standing moments before. The colors morph so rapidly that I know it's almost over. My suitemate Francesca directs me to her room downstairs, where the window faces west. Dark shadows fill her room as wine-colored light bounces from wall to wall.

I fling open the window and take photos of the dying light. The plum and crimson sunset is unlike any I have ever seen. I feel an acute loss for the views I have already missed and for all those I could not capture.

In spite of myself, I am still looking for the perfect picture, with an eye toward photographing the most aesthetically pleasing view. I am looking at a real sunset, but I am thinking of an ideal hypothetical. With every dissatisfied click of the shutter, I have disturbed the spontaneity I had so enjoyed.

We are told to embrace spontaneity our senior year. To say an emphatic "yes" to everything. But I am now skeptical of making spontaneity intentional.

The call to enjoy ourselves is almost identical to the advice given to me my first year here. Back then, we were told to explore because it broadened our horizons. Unfamiliar subjects could become our majors, and new extracurriculars could turn into our new vocations. Now, as seniors, we are told to embrace spontaneity because it is our last chance to do so.

After several repetitions, premeditated savoring can become tedious, even forced. I realize that I have started to chronicle sunsets in the very way I refused to pursue my freshman year: as if I were following a checklist. 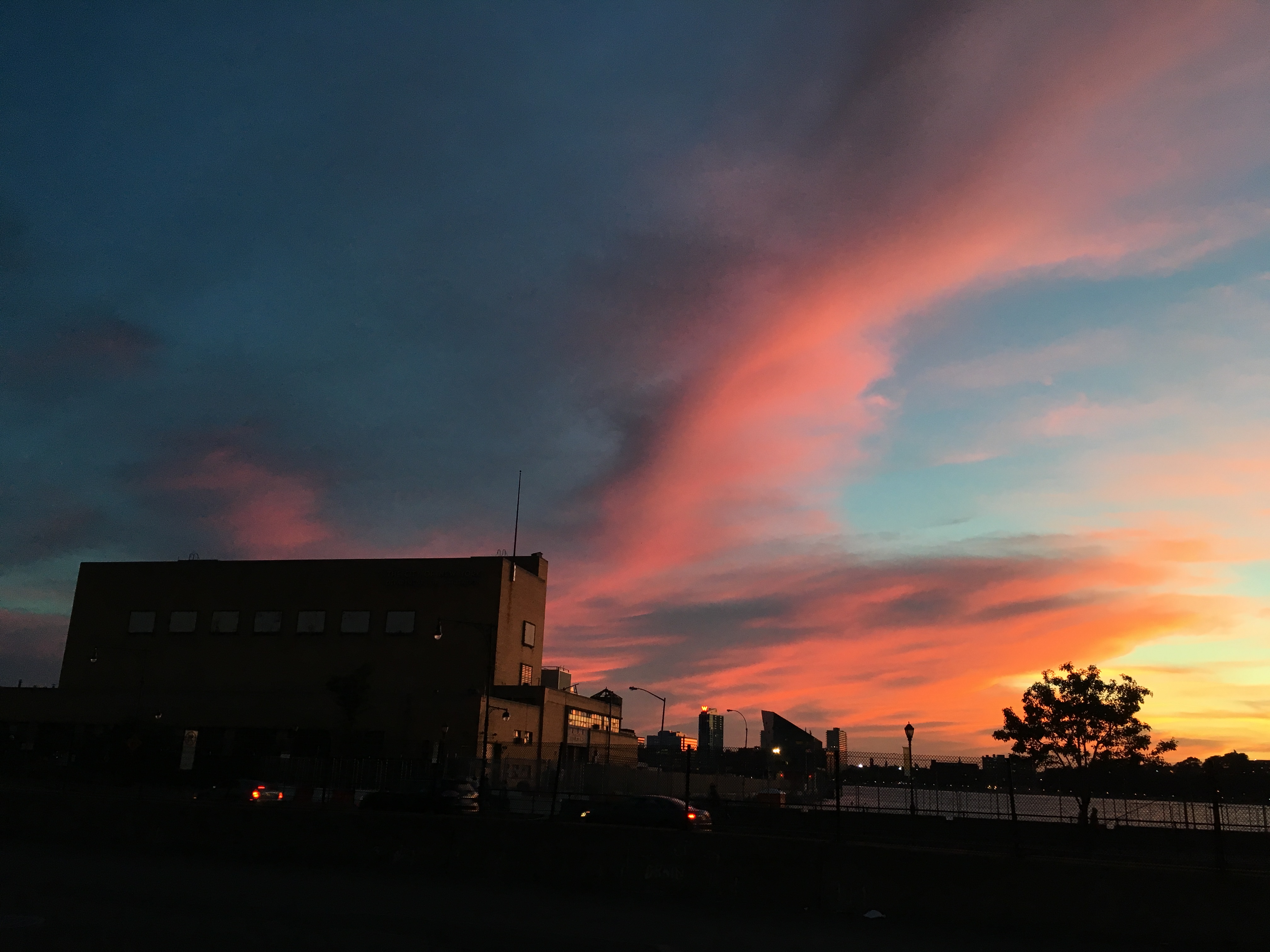 Into the Columbia Blue

I sleep with the blinds open. One morning, I am roused by a pink and yellow streaks identical to the sunset I witnessed the night before. I climb up my windowsill and watch the sun rise over the Manhattan brownstones stretching eastward. The tall oaks and elms of Morningside Park sway in the breeze. I start to anticipate the pleasures of the coming day. 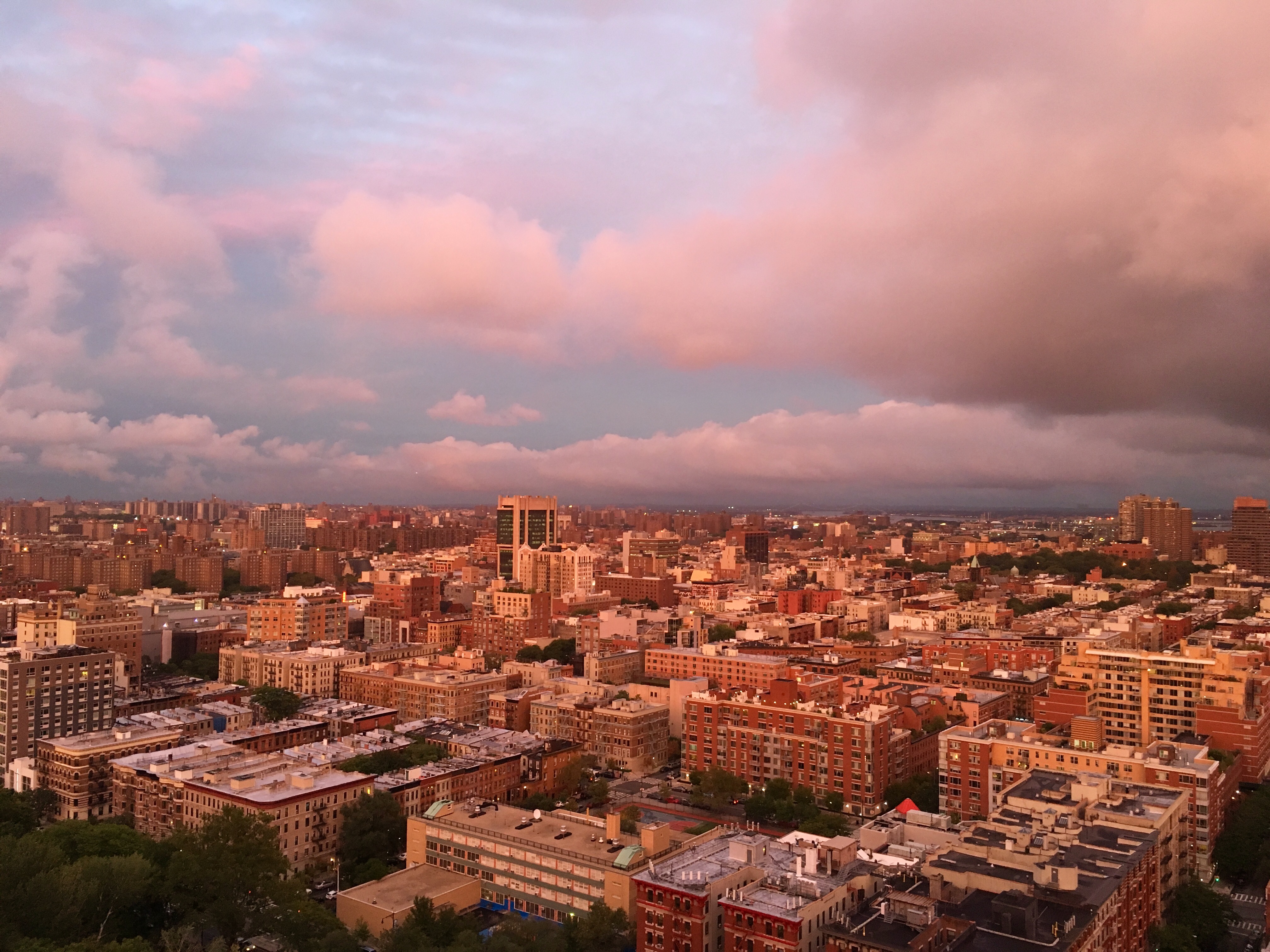 Something has already changed in the first three weeks of my senior year. I started to question what I had once dismissed as banal. I used to conflate it with hype and spectacle, but tradition does not make lived experience any less trivial.

I began exploring the sides of myself that others typically began discovering their first year of college. There is a reason, I realize, why people flocked to the boisterous crowds of an East Campus suite during the weekends. There is a reason why people enjoyed the hushed intimacy shared in the hours between night and day. These moments are delightful, even spectacular. 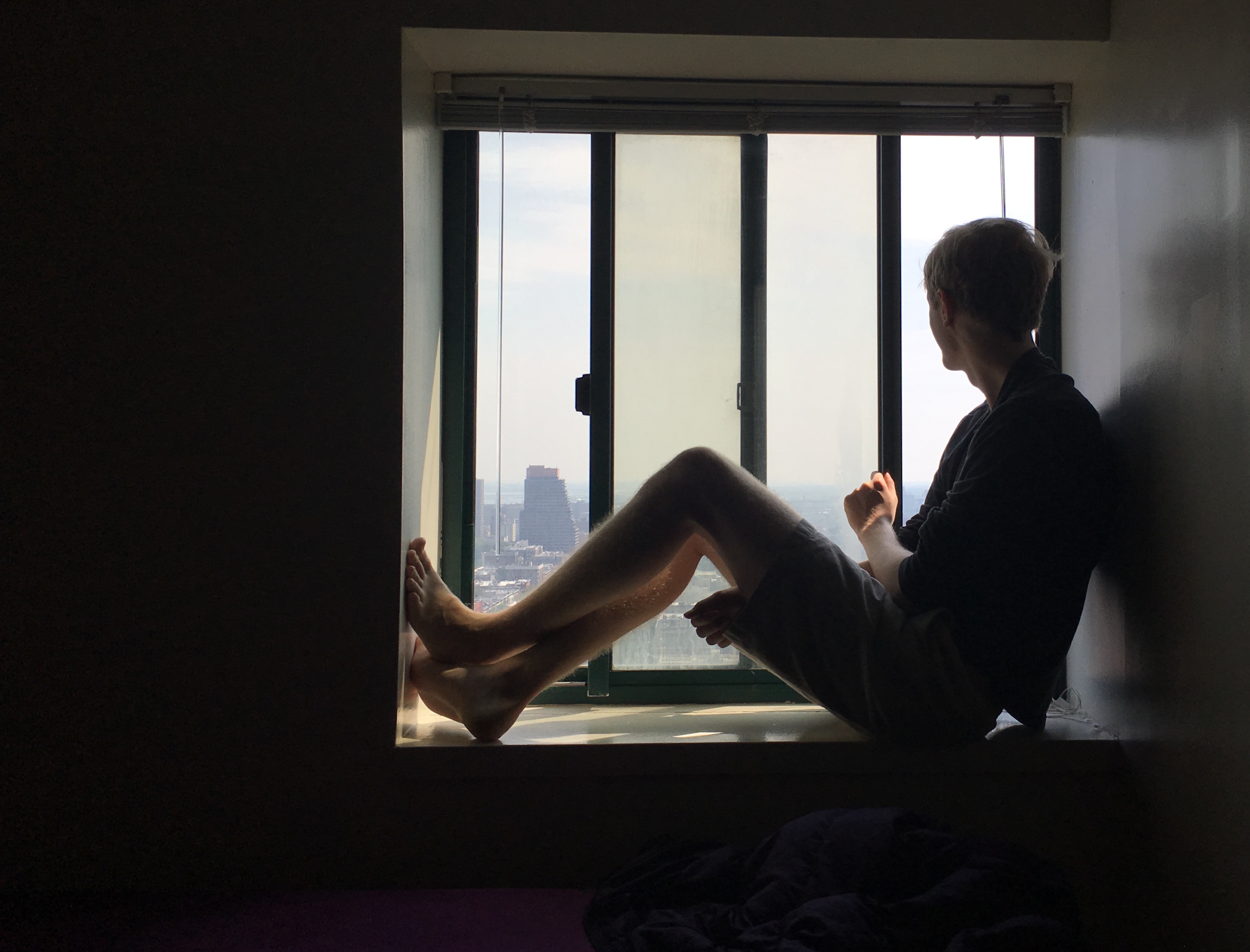 While I still refrain from intentional spontaneity, I find myself now taking deliberate strides rather than stumbling into the sun.

I climb to the top of the Low Steps with my suitemate Francesca. Full from our dinners, we sit under the blue sky with a sated languor. I am saying something to Francesca, my head tilted toward her, when a pink-orange haze washes over us. People seated around us turn. Francesca points to a thick mass of clouds above, now stained a flamingo pink. A couple seated below us pulls out their phones. Others run up and down the tiered steps to capture the campus view from different heights. 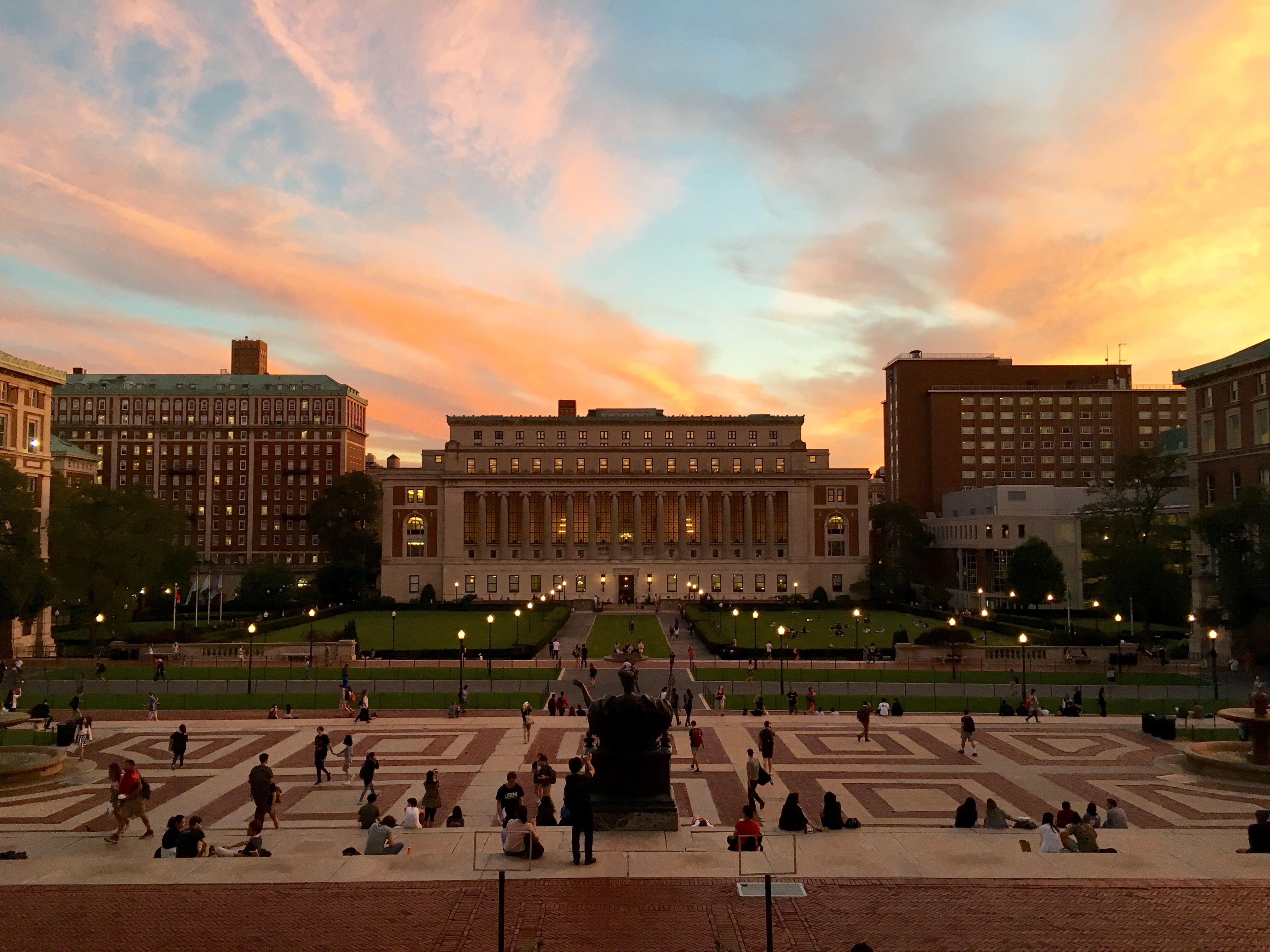 Every few minutes, a plane flies above the clouds, slicing the sky with two-pronged streaks. And yet, the luminous clouds hang, heavy and still, perturbed neither by the jet streams of engines nor the shutter-clicks of phone cameras below.

Two years ago, in March, I watched an airplane glide across pink clouds like these into the blue sky. That evening, I reread the prologue of Joan Didion’s Blue Nights, where she describes the time between day and night when the sky is a liquid blue. Back then, I was struck by the sensual beauty with which she describes swimming in the blue light.

Even more impressive was her comparison of aging to “the dwindling of the days, the inevitability of the fading, the dying of the brightness.” The analogy between nightfall and aging is so overused that it could be considered banal. But Didion uses it to express something original. To her, blue nights warn that the end is imminent.

And because I was not confident enough to wax lyrical about the sunset myself, I turned to Didion’s words that night.

Today, a different excerpt calls my attention. Didion says: “During the blue nights you think the end of day will never come.”

You wouldn’t expect moments of transience to feel infinite. But they do, whether or not you want them to last.

I imagine that, for many seniors, most undergraduate experiences have become so familiar that they feel trite. But for me, senior year is the freshman year I never experienced, a pleasant mundanity I have chosen not to embrace until the very end.

Didion says that as sunsets come a close, we will feel a sudden chill. “The blue light is going, the days are already shortening, the summer is gone,” she writes.

Yesterday’s sky was a deep violet. And the day before, it was mango and apricot.

Although I was not intending to, I allow myself to take a photo.