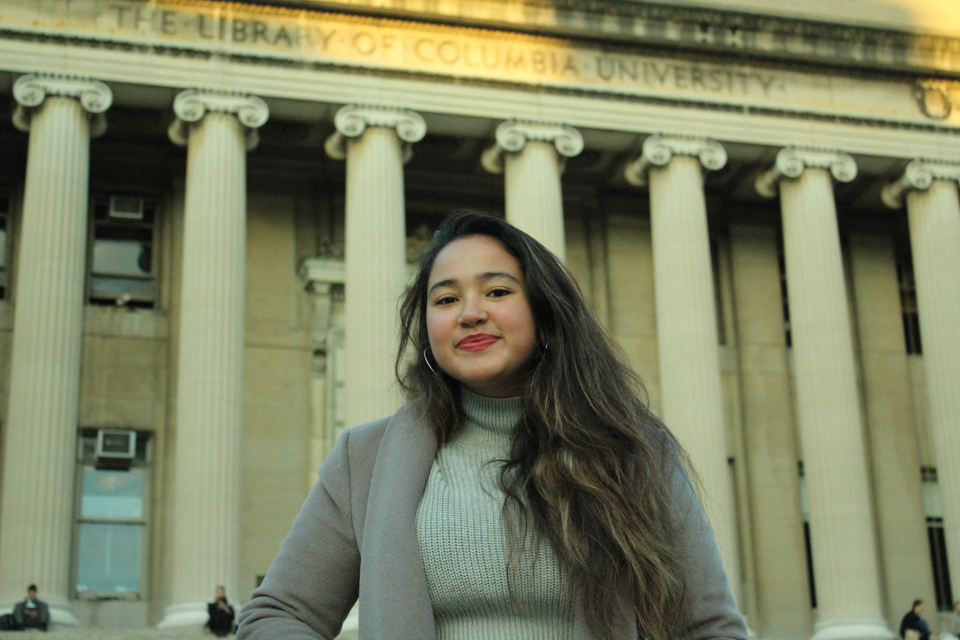 "I'm trying to figure out how to make my Snapchat story sexy."

"What if the headquarters of The Container Store was open concept—no walls, things just spilled out everywhere?"

These are thoughts that I scribble into my journal. Though random, these reflections and snippets of conversations are fodder—fodder for essays, cocktail parties, first dates.

While my observations about the quirks and oddities of daily life may be shared exclusively with my professors or fellow partygoers, Wally Baram, a first-year at Barnard, synthesizes similar observations and performs them in her stand-up comedy routines. While I contain my small reflections to my journal, Baram magnifies hers. She weaves a thread of thoughtful humor through her conversations to do one of language's most difficult tasks: make people laugh.

It is this approach that makes Baram such a unique comedian. The same skills that she uses as a student—deliberate thought, a devotion to detail-oriented observation, a careful, attentive way of engaging with the world—are the ones that she employs in her humor, which has a subtle, well-thought out quality.

Baram's appearance does not scream "performer." She does not demand the attention of all eyes; instead, she is a subtle comedian, one who unleashes her impressive wit after a few minutes of conversation and a judgment of the overall mood. She is patient—a skill she values as more crucial in a comedian's tool belt than funny accents or impressions.

When she talks about these idols—Judd Apatow, Amy Schumer, and Ali Wong, in particular—her face lights up like those of students when they receive an extension for an assignment. Her dimples sink deep into her glowing face and, as she smiles, her eyes squint and her nose crinkles. Together, laughing about Jim Gaffigan's stance on Chinese desserts and Lena Dunham's genius, Baram and I looked like two giddy comedy nerds hooting in the afternoon.

When telling a joke, Baram resembles her idols. Her accent changes slightly, her hand motions entice, her eyes sparkle. She oozes passion.

These changes and movements are purposeful. "I rehearse to a pulp," she says. Although Baram's routines are precise and deliberate, she uses her skills to make them look spontaneous. "Comedy is funnier when it looks like it's been happening spontaneously," she tells me, "when it looks like it's just coming out for you organically. I think that's an art within itself." Baram weaves together planning and improvisation to create a precise, thoughtful joke.

But it doesn't come off as too practiced or too rigid. She does not hurry through the meat of the joke to get to the sweet, sweet punchline. She's relaxed, serene.

Baram developed this demeanor as the result of a lot of careful practice, paying close attention to those around her. Before coming to Barnard, Baram took a gap year working as a stand-up comedian in her hometown of Los Angeles. Taking classes at the Upright Citizens Brigade Theater, Second City, and The Groundlings, Baram aimed "to capitalize on the LA culture" and hone her comedic skills—skills she had been refining since she first became enthralled with humor and performing at her all-girls middle school.

During her gap year, she did many open mics, each time adapting her approach to the material. Last September, as many first-years were editing their first English papers to their professors' likings, Baram was editing her material for audiences at large festivals. She was also navigating the West Coast on tour, performing in over 100 open mic nights, and working with actors, writers, and comedians in their 30s, 40s, and 50s.

She believes that being will help her both as a comedian and as a person. "It will help me think analytically and be able to synthesize things," Baram says.

She has a unique goal for her education at Columbia: She is not so concerned with memorizing the exact material that will be on the test, but instead with developing a nuanced way of looking at the world. "What I ultimately have to do," Baram tells me, "is assign purpose to why I'm here and realize these things will help me as a comedian." School is not only a place in which she can learn in the more typical sense, but also a place in which she can build her comedic arsenal.

Despite the benefits of receiving a well-rounded education, Baram admits there are challenges to adjusting back to a school environment. Referring to her gap year, she says, "I was around a lot of very mature people, so coming back was definitely challenging to adjust to socializing with younger people who are my age, and I had to adapt to all the cultures and different things relevant to that." She also has endured the plight of a lot of other Columbians: "I haven't ever had to do so much reading."

Most confounding of all to Baram, however, is navigating the shift back to an educational environment when her passion is noneducational. To help her adjust, Baram says, "I have to make myself be disciplined with things," though she admits that, at some times, it can be hard to remember how her studies relate to her ultimate aspirations.

Going to school in New York City helped alleviate some of Baram's concerns about losing her comedic chops as she studies away in Butler Library. "Barnard is perfect in that it's in the city, so it puts me within very close proximity to tons of comedy opportunities," she tells me.

Despite New York City's abundance of spaces dedicated to comedy, not all parts of the city inspire laughter. When referring to academic environments, Baram does have one observation, something I (a transfer student) have noticed as well: the absence of class clowns or humor in our classes. Perhaps students are so engaged in the learning—or, more realistically, so constrained by their Google calendars—that they do not feel like they can crack a joke or bring humor to a Russian literature class. As Baram says, "A good environment for people to laugh is, firstly, to establish that it's OK to laugh. So I think often in the classroom, someone will make some funny comment, but no one is quite sure if it's OK to laugh at it."

When Baram explains her passion for and theory of comedy to me sitting down on the lawn among these hallowed halls of education, she is not anxious. She is not hurrying our time together, so that she can get back to studying; instead, she absorbs the world around her. Pausing and observing, she takes it in: looking around at others, perhaps probing for inspiration. Her antennae are looking for signals and practicing what all of us here strive to do: explore.

Baram has not always been this way. She admits that she has terrible social anxiety. To put herself as ease, she says, "I will try out bits in conversation or with small groups of people." Her notebook is the stage on which she explores these often awkward interactions with people.

Comedy also helps her understand herself. "Comedy takes a lot of my good traits and couples it with a lot of my bad traits and sort of synthesizes them in a way where it's something I can be proud of."

Baram's ability to pick up on and analyze the world around her is what we are all supposed to do during our time in college: question, synthesize, explore. To train passive witnesses, after all, is not the objective of Columbia's curriculum; rather, we are encouraged to get active, to get interested, and—for Baram—to get comical.