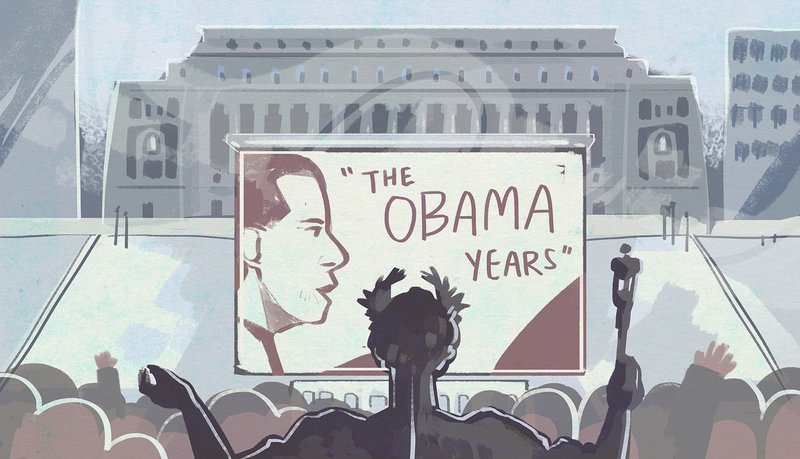 And, I imagine, the sheer size of the crowd must have been overwhelming.

Hot chocolate and cider were being given out in paper cups. A few people waved Columbia blue pom-poms.

You probably would have lost your friends in the swelling mass of people that contained your first-year floormates, your classmates, your teachers, your Java teaching assistant, neighborhood families. That day, all of these people were spread across Low Steps, up and down and onto the plaza.

At the foot of this crowd was a screen, and in front of this screen was University President Lee Bollinger. One of his first lines, when the crowd finally quieted down, was:

"It feels as if history has all come together in this one brilliant moment."

This scene has been immortalized, for those interested in reliving it, in gorgeous 240p on the ColumbiaNews YouTube channel.

Many thousands of miles away, in a classroom in Accra, Ghana, I also watched Obama's inauguration, albeit on a much smaller screen and in a much smaller crowd. I remember being impressed by the intermittent shots of the crowd that spread down, down the National Mall as far as the eye could see. More vividly, I remember my sixth grade science teacher's tone of wonderment the next day, when we asked her if she'd watched it too, and she responded, "every second of it."

"It is certainly a moment never to be forgotten," Bollinger said.

And I haven't. It was the first major election I remember ever watching. It was the first election in which I was aware of who was running. I understood the stakes of this election (or believed I did). I formed my first coherent political opinion for this election (though it was undoubtedly one I borrowed from my parents, and was based on little more than just how really awful Sarah Palin seemed).

We've finally entered the season of Obama retrospectives, so naturally it was time for The Eye to take a stab at it. But the challenge of capturing an eight-year block—an inherently artificial construction—is a formidable one, indeed.

You could try parroting off a list of headline moments from the last eight years in chronological order: the Somali Civil War, the Deepwater Horizon explosion, the death of bin Laden, Ferguson, Brexit. But it's a list that is inevitably incomplete, dissatisfactory. My headlines likely read a little differently than yours.

You can also try to fathom the distance between that moment and now using the rotation of other things that happen every four years: We’ve since seen four sets of Olympic games, two FIFA World Cups, two leap years, two Frank Ocean albums. In the last eight years, I finished middle school, finished high school, and started college.
In the end, my mind kept wandering back to the beginning of the Obama years, to my memory of watching the inauguration on one of those outdated TVs with the bulging screens, and then to the image of Columbia on Low Steps (and in Barnard's James Room, and in various dorm floor lounges, and in Tom’s Restaurant). And I kept thinking about us and them, this undergraduate cohort and that one, and how very different our first political inheritances have been.

We tend to usher in the beginnings of ages with fanfare—with hot cider and pom-poms and the coming together of an entire community. Endings get less attention.

So to commemorate the end of the Obama years, The Eye, in the style of Lynn Hirschberg, has decided to sit down with six Columbia students to talk about the hopes they harbored on the eve of this presidency, their impressions of its early days, and what it is like to politically come of age during an unprecedentedly divisive and hostile election.