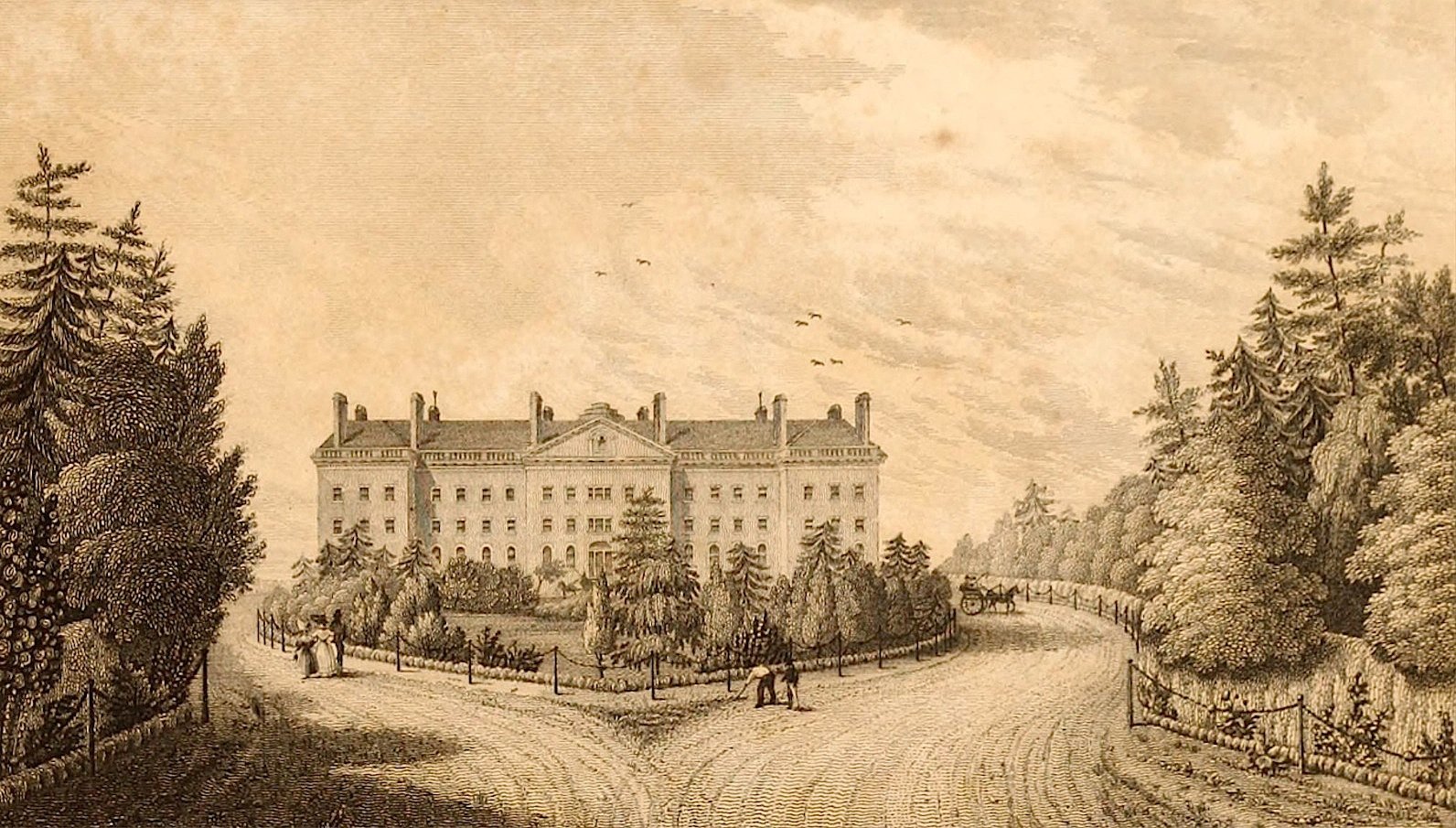 Drawing of the Bloomingdale Insane Asylum that is now only survived by Buell Hall.

Just to the right of Low Library, there is a building that carries a powerful history extending beyond that of our university. Its bricks are a deeper red than those paving College Walk; its house-like design is more charming and quaint than the symmetrical, imposing buildings that encircle Columbia's lush green lawns.

The building feels foreign. It doesn't feel like it belongs on our campus. And in fact, it doesn't. It is not a part of the neoclassical master plan McKim, Mead & White designed at the end of the 19th century.

When I visit this building, commonly known as Buell Hall, the first thing I notice is the peeling white paint that borders its windows, a rare glimpse at some of the building's original features. . The rest of Buell Hall is covered in more recent additions, as if in costume: Posters are plastered on the front door and windows, some advertisements for events. Labels—the Maison Française, the Center for Study of American Architecture—are interchanged, distancing the building from its past.

Throughout Columbia's history, Buell Hall's identity and purpose has shifted regularly—it has been known as College Hall, and East Hall, and Alumni House. Its shifting identity, then and now, has rendered its institutional history practically a secret.

When it was constructed, it wasn’t part of the University at all, but rather, part of the Bloomingdale Insane Asylum, which was built on the Morningside campus’s land in 1885 as a home for wealthy male psychiatric patients of the institution.

This plot of land, between 116th and 120th streets, was an exceptionally influential space even before it became Columbia, both in shaping the country's mental health infrastructure and defining the identity of the neighborhood we now inhabit. Still, its history is far from straightforward, and at some points, marred by controversy.

This history begins in 1769, when Dr. Samuel Bard, a student at King's College, gave a commencement speech that inspired the creation of the New York Hospital, from which the Bloomingdale Insane Asylum ultimately expanded. His speech stirred city leaders, who, led by Henry Moore, the royal governor of the Province of New York, immediately pledged 1,000 pounds sterling for its creation.

After Moore raised funds, Bard, along with Dr. Peter Middleton and John Jones, who himself was made famous by his appointment as the first "Professor of Surgery in the New World," presented a petition for the establishment of the hospital to the colonial government in 1770. The plan was approved a year later.

The new hospital had a single wing dedicated to treating mental illnesses, but due to the rapidly rising number of patients, the hospital sought to expand. In 1808, a new building, officially called the "Lunatic Asylum" was constructed. According to William Logie Russell, author of the book The New York Hospital: A History of the Psychiatric Service 1771-1936, foregoing the term "hospital" in its name was intentional. The founders wanted the facility to imply a space of refuge in the name—a place where patients could feel safe from harm. Housing 80 beds, the Lunatic Asylum was the first hospital of its kind in New York State.

To the country, the Lunatic Asylum was the first to attempt at what its physicians and backers considered "moral treatment." The founding physicians saw it as a break from the old medical methods; they only focused on "medical treatment" in an effort to treat patients as human. Patients were allowed to spend time outdoors, and there was limited use of constraining tools like straitjackets, which were common at the time.

This moral consideration was integral to the mission of the institution. The founders of the hospital, whom local historian and Manhattan tour guide Jim Mackin calls "very, very enlightened," saw mental health as a moral enterprise, instead of a medical one.

Mackin is an authority on the history of the asylum, maintaining a historical archive on the neighbourhood and leading tours across various New York neighbourhoods. He has also put together an extensive presentation on the Bloomingdale Insane Asylum for the Bloomingdale Neighborhood History Group, which is a circle that puts on events relating to the neighborhood's history.

"[The doctors] understood that if you took mental patients who were normally in a regular hospital, and you [kept] them separate, that seemed to help them get better about it," Mackin explains.

In 1820—in light of a lack of space and in consideration of the financial incentives for proper treatment of mental illnesses, which the New York Hospital was uniquely equipped to provide—the hospital obtained a 26-acre farm next to Bloomingdale Road, now known as Broadway, and renamed itself the Bloomingdale Asylum. It opened its doors to patients in June 1821, and six years later, the asylum expanded to include a separate building for women.

For those who could afford it, the asylum provided the same "moral treatment" that the New York Hospital had implemented. That treatment method was the defining feature of the now-expansive asylum, which was responsive to criticism—notably from Dorothea Dix—of its practices, seeming to continually aspire to a model of moral treatment, giving patients more freedom than they would have had previously and resorting to less inhumane methods for punishment and treatment.

"Every practicable effort is made to pursue that system, at once gentle, philosophical and practical," writes Pliny Earle, a physician at the institution at the time, "which has resulted from the active and strenuous endeavors of many philanthropists, in the course of the last half century, to meliorate the condition of the insane."

According to Earle, the only means of restraint used at the asylum at the time of his writing, in 1848, was the camisole, which had long sleeves and leather muffs for hands. Russell undermines this claim, however, writing that while the asylum prohibited use of the straightjacket, they would occasionally make use of tranquilizing chairs.

The asylum's progressive philosophy led to other initiatives for its patients. In 1845, formal schooling was implemented in the men's department. Patients performed manual labor, practiced religion, listen to sermons, exercised—both on foot and on horseback—and received an education. Specially appointed teachers gave lectures on topics like natural philosophy, chemistry, animal physiology, astronomy, poetry, Greek, and mechanics.

Mackin concludes that the asylum can take immense credit for advancing mental health care practices at that point in history.

However, a series of later controversies brings into question the seriousness of Bloomingdale's commitments to moral practices.

In the 1850s, the asylum committed what historians see as its first serious fault. Following the construction of a new public facility on Blackwell Island in 1839, which was meant to provide services to the public at low cost, the asylum was forced to focus on profit, surging prices to support itself—to the detriment of the quality of care for the poor.

The institution's annual report in 1852 admits this: "This Asylum is not now to any great extent used for the entirely gratuitous reception of the insane poor."

"Make no bones about it," Mackin admits, "to spend time at the Bloomingdale Insane Asylum you had to pay for it, and it wasn't cheap."

But the most significant scandal the institution faced came 20 years later, in a series of exposés written by a journalist, Julius Chambers of the New York Tribune, who went undercover as a patient at the asylum.

His articles reveal that the asylum, by 1872, had apparently lost its commitment to the "moral" mode of instruction for which Earle had earlier lauded it. In a captioned description of the article "Among the Maniacs," published on August 21, Chambers writes of "close cells, uncomfortable beds and chairs, scanty and foul food, filthy baths, and rude and vulgar attendants." The privatized nature of the asylum, coupled with its high prices, bring into question why their facilities were the way they were described by Chambers.

As the last expression of a mercenary tradition, moral scrutiny was not what shut down the Bloomingdale Asylum—it was the financial interests.

According to Mackin, the asylum began to feel pressure from the neighborhood, as residents found having a mental health care facility in the neighborhood undesirable. Concurrently, there was financial pressure for the asylum to move as well, as real estate prices in the area were rising considerably.

Today, the only remnants of the asylum on the Columbia campus are the Macy Villa and an underground tunnel, which is a part of the intricate tunnel system beneath campus. However, the Bloomingdale Insane Asylum's impact stretches past the years it resided on Columbia's land. Mackin explains, "It really establishes the whole institutional character of our neighborhood."

Andrew Dolkart, a professor at the Columbia School of Architecture, Planning and Preservation agrees, in his book Morningside Heights: A History of Its Architecture and Development. He explains that ultimately, Morningside Heights is a neighborhood of institutions, and that these establishments settled there because it was a blend of "quiet seclusion and urban excitement."

Bloomingdale's footprint on the neighborhood is complex and controversial, just like the institution that took its place. During my visit to Buell Hall, as the white paint peeled off the window rims, I could almost sense the skeleton of the Macy Villa beneath, working to cast off its coating and, in all its nakedness, expose the nuanced and controversial history that it hides beneath.

This is the same history that, in many ways, built the space as we know it. "We're not going to take it for granted that we've got Columbia University here, we've got the Cathedral [of] Saint John the Divine, and that we had the Jewish Theological Seminary and Union Theological Seminary," Mackin says. There are around 20 other institutions with the area, and, according to Mackin, "that all begins with the Bloomingdale Insane Asylum."

Have fun leafing through our tenth issue, and subscribe to our new weekly newsletter, As We See It!