After UAW’s betrayal, Graduate Workers must vote ‘no’

After UAW’s betrayal, Graduate Workers must vote ‘no’ 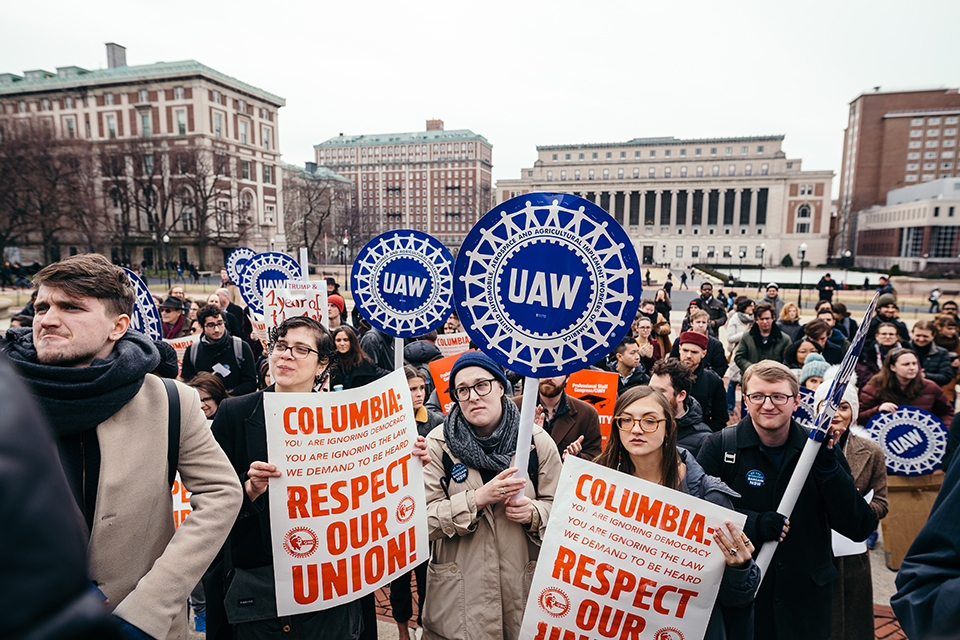 United Auto Workers has colluded with Columbia management to undermine our bargaining power.

On Monday, Nov. 19, 2018, we received the exciting news. Columbia finally agreed to bargain with its graduate workers, something we have now been demanding for almost two decades. If you are an active union organizer like me, this decision meant it was time to head to the nearest bar for happy hour to celebrate.

We were about to make history—or so we thought.

It soon became clear that this victory was mostly hollow. In an emergency meeting that evening, we found out that since October, the UAW had been in secret negotiations with Columbia for several weeks putting together a mutual framework for bargaining.

UAW is the international union with which we, as graduate workers, have affiliated. Until now, it was the graduate workers who owned the entire organizing process. We spoke for ourselves, and we had never let anyone from UAW make any decisions on our behalf.

The emergency meeting was fiery, with dozens of graduate workers condemning UAW for going behind our backs. In the meeting, the director of our region (9A), Beverly Brakeman, a union official that I personally had never seen or heard from before, defended her unilateral decision arguing that the only reason Columbia reached out to UAW was on the condition that negotiations remain “off the record.” Grad workers challenged her directly, stating that “Off the record” is a journalistic term that has no meaning in this situation.

Why, then, did Brakeman keep this information a secret, not just from GWC members, but from our elected bargaining committee as well? What was UAW trying to hide?

In the meeting it also emerged that the co-constitutive framework for bargaining contained a number of worrying clauses—the most concerning of all being the "no strike” clause.

Although we would begin to bargain on Feb. 25, 2019, we would sacrifice our democratic right to strike until April 6, 2020. More specifically, the language of the framework says that GWC would not “authorize or condone any strike, sympathy strike, work stoppage, slowdown, or other interference with Columbia's operations by employees.” This not only denies us our right to strike, but also our right to support other Columbia workers and students if they were to engage in any workplace action. This is a divide and rule strategy that ultimately takes away our power as a union.

Effectively, agreeing to this framework is agreeing to bargain with both hands tied behind our backs.

Anyone who knows anything about the history of labor struggles—including the fight for an eight hour workday—knows that the strike is the most powerful tool during contract negotiations. Without it, not only is the employer actually incentivised to bargain in bad faith, but they’re also given free reign to delay a resolution for as long as possible.

Giving up our right to strike until April 2020 means effectively the same as delaying good faith bargaining until that very same date. Pushing off an actual contract agreement at the very least into the following academic year would mean that about a third of all graduate workers would not see the benefits of this deal. And if we are not willing to wait that long, it is all but guaranteed that we will be forced to sign a lousy contract.

What kind of agreement gives up the strike, our most potent weapon, before we even begin bargaining? It seems that Brakeman and the other UAW bureaucrats are more interested in ramming through a deal than fighting for a good contract that improves workers’ lives.

We must vote no.

Between Nov. 21 and 26—a holiday weekend when many won’t even be on email—there will be a hastily drafted and effectively undemocratic poll organized by the union on whether to support the framework.

We have been betrayed by UAW bureaucrats colluding with Columbia management. We need to put a stop to this bad deal.

The “vote” goes against everything we stand for as a union. It subverts democratic procedures which foreground the importance of extensive outreach before any GWC membership vote. The administration tried this at NYU, but graduate workers there fought back. This is why NYU’s graduate workers also support us in voting “no.” This is why we as graduate workers are organizing against this upcoming vote.

I hope that all graduate workers will “Vote No” and that other students and faculty will join us in support.

This is our union. Nothing for us, without us.

The author is a member of the Graduate Workers of Columbia. He is a doctoral candidate in the department of Middle Eastern, South Asian, and African studies.