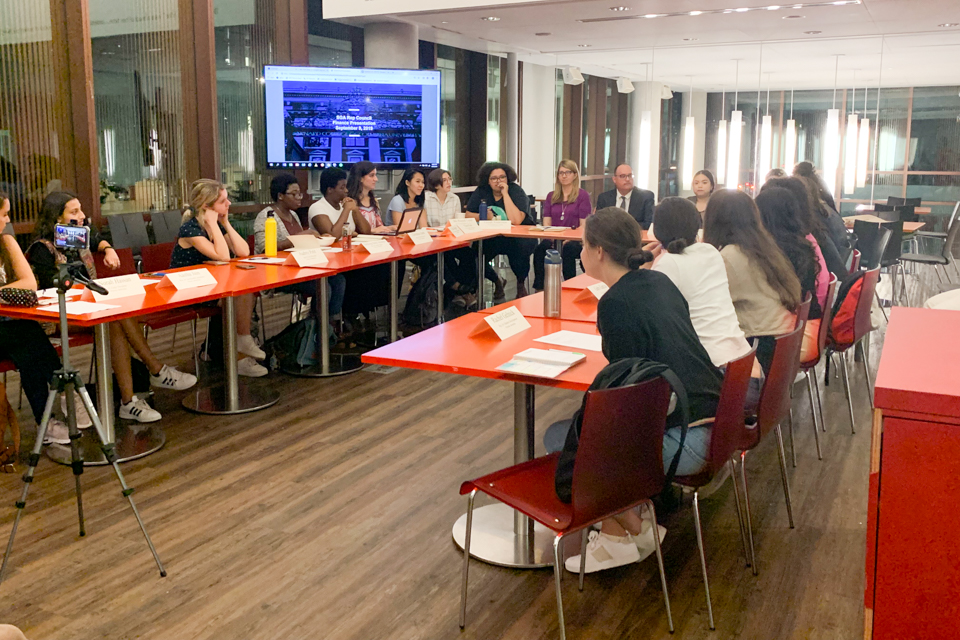 Student representatives questioned Chief Operating Officer Rob Goldberg and Vice President of Finance Eileen Di Benedetto on updates to Barnard’s endowment, a new initiative that would increase the accessibility of course materials for students, and changes to Hewitt Dining Hall in the first Student Government Association meeting of the semester.

During the meeting, Goldberg and Di Benedetto presented updates on Barnard’s endowment and operating budget. As of June 30, Barnard’s endowment had reached $363.6 million, a 5 percent growth from the previous year. Historically, Barnard has always had the lowest endowment of its peer institutions, including the Seven Sisters colleges.

Some of the principal initiatives discussed during the meeting were access to and affordability of course materials for students. In last November’s Desserts After Dark, an annual survey that allows students to provide feedback on student life at Barnard, students expressed dissatisfaction with the lack of support to low-income students who need help purchasing textbooks.

According to Goldberg, this new initiative will help students manage textbook costs and additional expenses required for certain classes in the college, such as art, photography, and language classes. He added that the initiative will begin with faculty and student surveys, whose specifics will be released in the upcoming months.

“The original notion was about textbooks, but we brought it out to course materials. It’s not just about books: It’s about art supplies, it’s also about other kinds of expenses [such as] access codes for various classes. We’re really trying to find ways to address this comprehensively,” Goldberg said.

When asked about what to do until the initiative is implemented, Goldberg suggested that students contact the Office of the Dean of Studies or the Financial Aid Office for support. Christina Juste, BC ’22, representative of Student Health Services, also asked Goldberg about ensuring the timely distribution of course information related to textbooks and syllabi, which she stated had not been provided for some of her own courses. Last year, it was revealed that almost half of all Barnard courses were not in compliance with federal law which mandates that professors list textbooks and their retail costs before class registration.

In response, Goldberg encouraged students to alert the Office of the Provost of any discrepancies in syllabi timeliness.

In April of this year, Barnard severed ties with its controversial food provider, Aramark, following a student-led initiative. In its place, Goldberg announced that Chartwells, one of the largest food service providers in the world, would take its place.

A complete renovation of the dining hall will be complete by the fall of 2020. Goldberg emphasized how important student feedback was in determining the upcoming layout of the space.

Chelsea Sinclair, BC ’21, junior representative to the board of trustees, questioned Goldberg on discrepancies between the Aramark and Chartwells contracts, citing an Aramark program that allowed previously-convicted individuals to be hired as employees. Conversely, Sinclair claimed, the Chartwells contract does not allow for the hiring of incarcerated persons.

In response, Goldberg stated that all employees apart from Aramark management had been offered positions to return to the college, but did not comment on the specifics between the two contracts. Spectator could not independently verify either claim.