Taking on the Fun Run and its 8:30 start time

Taking on the Fun Run and its 8:30 start time 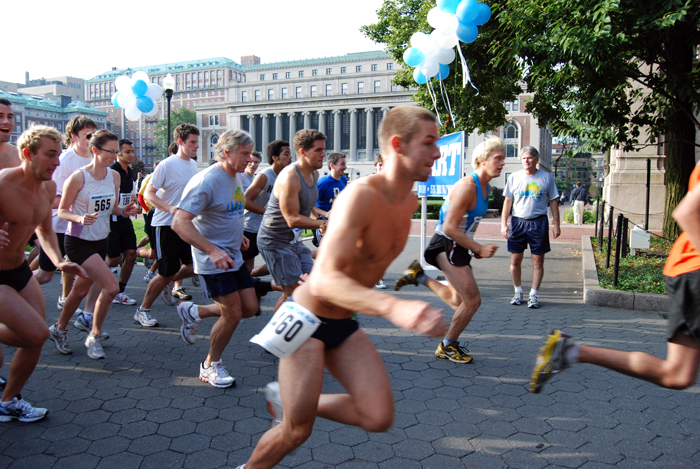 University President Lee Bollinger gets lost among Speedo-clad athletes during his Eigth Annual Fun Run on Friday. The runners stepped off from College Walk bright and early.

I signed up for this year's Fun Run on a whim. I'd intended to do it freshman year, but didn't realize early registration was required until it was too late.

Last year, I was deterred by an 8 a.m. wake-up call on a day when I could have otherwise slept until noon. But a week before the event this year, my co-editor, a serious runner for whom this race is akin to a footnote, hollered across the office, "Yo, you doing PrezBo's Fun Run?"

That's when I decided I couldn't back down.

It's not as if I can't run. In fact, during each of the last five summers, I've done a triathlon that requires running a 5K after swimming half a mile and biking 15. I had not, however, run much at all in the month since this year's triathlon, nor had I ever run in a race after working in a newspaper office until the wee hours of the morning.

In an attempt to squeeze out every last possible drop of sleep, I set my alarm with the intention of getting up at 8:25 a.m. The announced start time was 8:30. There was no chance, I figured, that a race involving several hundred bleary-eyed college students was going to start on time.

At 8:35, I showed up on College Walk and found nothing but a few race volunteers, some discarded water cups, and a few other students hastily pinning number bibs onto their shirts and looking around, bewildered. We looked at each other, shrugged, and started to run.

I've run in Riverside Park many, many times, but I realized once I was there that I had no idea which way the runners had gone. Amid rising panic, I shouted a plea for help to a couple sitting on a bench alongside Riverside Drive. They pointed and urged us on, and we thus descended at a sprint into the park.

Luckily, some partake in the Fun Run with the intention of walking, so it wasn't long before I caught up to a group of stragglers. In fact, for a while, I felt pretty good—I was passing people left and right, and no one was passing me.

Unfortunately, this was not to last. Barely halfway to the turnaround point, I began to pass dozens of runners already on the way back, including President Bollinger himself. My suitemate, a member of the track team and thus a volunteer along the course, ribbed me both times I passed him for being so far back. And, as I knew would happen but still tried to stave off, running the first mile at a breakneck pace on little training and even less sleep meant that with about a mile to go, I hit the wall. Hard.

So, two days later, my quads are still sore from suffering through that last mile, and I still wish I'd dragged myself out of bed at 8:20 so I could have measured myself against Columbia's finest.

Next year, I will. Consider my competitive drive fueled.