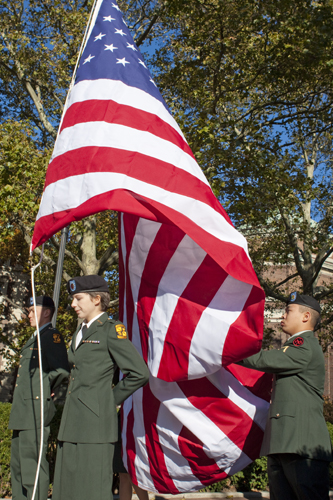 Breaking from a 42-year ban on military activities on campus, students raised the American flag over Low Plaza Thursday morning in a traditional ceremony in honor of Veterans Day.

Six members of the Reserve Officers Training Corps at Fordham University—from Barnard, the School of Engineering and Applied Science, Columbia College, and the School of General Studies—will continue to perform flag-raising ceremonies every Monday at dawn, after Columbia's University Senate gave them the green light last month.

Daniel Izzo, a first-year MBA student and army captain, said that the flag-raising ceremony came about because of the increasingly important place veterans and military service members have on campus.

"I think that Columbia veterans are taking a more active role, partially because of strength in numbers. It's just a build-up of momentum that's really bringing veterans to the forefront at Columbia now," Izzo said.

Amber Griffiths, TC and veterans benefit coordinator for the Office of Student Services, said that this year there are over 300 veterans in Columbia's undergraduate and graduate schools, an increase tied to the revised G.I. Bill that covers tuition for many of those returning from service.

"It's an important part of who they are, so why wouldn't they want to share that with the rest of the students?" Griffiths said, adding that veterans want more visibility on campus.

Staff Sergeant and University Senator Jose Robledo, GS, said that he and others have been lobbying the University Senate, University President Lee Bollinger, and Public Safety for permission to reinstate these ceremonies since May.

Natalie Lopez-Barnard, BC '11 and an ROTC cadet who participated in the flag-raising ceremony in uniform, said it's sometimes difficult to toe the line between her life as a student and her life as a cadet.

"It can be hard to relate to my friends sometimes when they're whining about how they have to wake up at seven one day, and I'm like I have to be up at 4 a.m. Big deal!'" she said, adding that she is still proud to be a part of military culture on campus.

Participants and onlookers said they could not speculate about whether or not a formal ROTC program will return to campus anytime soon.

Robledo said further military activity, like the return of ROTC, is uncertain.

"There's way too many moving pieces, and I'm just a small cog in the wheel," he said, adding that ROTC's return would take years of coordination between the Department of Defense and the University to secure funding and develop curriculum.

Between World War I and World War II, ROTC was a required activity for all students at Columbia, and John Jay Hall was committed to ROTC activity, John McClelland, GS, said.

But in the 1960s, many universities, including Columbia, banned ROTC from their campuses to protest the Vietnam War, a ban that has been reaffirmed in recent years in response to the "don't ask, don't tell" policy, which prohibits openly gay service men and women from serving.

Bollinger has said that DADT violates the University's non-discrimination policy, and he will not be comfortable with the program's return until it is repealed.

McClelland, the president of the Hamilton Society, a group of students who are exploring the option of ROTC's return, said he has gay friends who have served and supports the repeal of DADT.

"We do have a burgeoning community of veterans on campus, and that's really done a lot to smooth over the rhetoric behind the ROTC debate," McClelland added.

Check out Spectator's video of the ceremony here.

Note of clarification: In the 1960's and '70's the University Senate voted to deny credit and facilities to military activities, which amounted to a de facto ban. The Senate never ordered ROTC or military recruiters to leave, but made it impossible for their activities to continue. Additionally Columbia students from off-campus ROTC programs have participated in other events on campus related to military service in recent years.