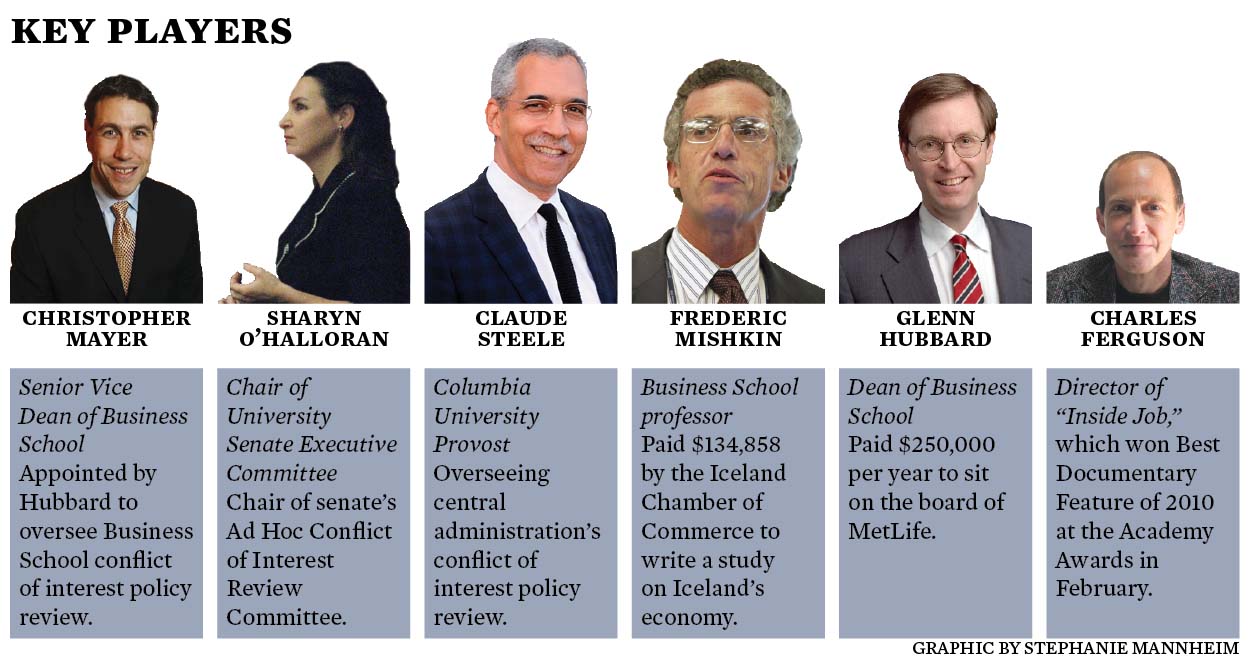 This is the third in a three-part series about the University's disclosure policies. See also parts one and two.

After watching the movie "Inside Job" in October, Business School student Joseph Weishaar was troubled.

"It damages the school's reputation," Weishaar said in an email. "The administration can mitigate the damage, but if they don't respond it makes it look like the school is complicit."

At a town hall later that month, Weishaar confronted Hubbard about the movie, asking him how Columbia was responding to its claims about conflicts of interest among economists. Hubbard told him that there was some internal discussion about the film, but he said nothing about a public response.

University President Lee Bollinger and Provost Claude Steele declined to be interviewed for the film, although both have since discussed the movie's claims publicly. Bollinger told Spectator in a recent interview that he is taking them very seriously, and that he has asked Steele, the University's highest academic officer, to lead a review of the school's conflict of interest policy.

A central question is whether professors should be required to disclose their outside consulting work to the University, which they are not required to do under current policy so long as the outside interests do not directly relate to their work at the University.The University Senate and the Business School administration are also conducting their own reviews of the University's policy.

Administrators, professors, and students, though, say that these reviews are about more than just conflict of interest policies—Columbia's reputation is at stake. The senate will screen "Inside Job" today and the film's director, Charles Ferguson, will take questions from senators afterwards.

This screening was arranged by the senate's External Relations and Research Policy Committee. University Senator Liya Yu, GSAS and the co-chair of the committee, said that "Inside Job" raises important "question[s] about Columbia's identity."

B-School responds
Teachers College professor Kathleen O'Connell—Weishaar's mother—called the film "appalling" and said that "the Columbia professors were even more appalling." She said she was especially surprised considering Hubbard and Mishkin have both had high-ranking government jobs—Hubbard was at one time a top economic adviser to former President George W. Bush, and Mishkin was a governor of the Federal Reserve.

"I was shocked at the lack of ethics that they displayed. They are in really powerful positions—they have been in powerful positions in the Federal Reserve and the President's economic advisors," O'Connell said. "But when they were asked about declaring their conflict of interests, they acted like that was not done in the business world, and I couldn't believe it."

Hubbard and Mishkin, who were both featured in on-camera interviews in "Inside Job," declined to be interviewed for this story. In a message posted on the Business School's Facebook page in February, the day after "Inside Job" won the Academy Award for Best Documentary Feature, Hubbard defended his decision not to publicly contest the film's claims.

"I have not actively worked to correct the incomplete picture that Mr. Ferguson has sought to present," Hubbard wrote. "Rather, I am counting on the discerning minds of individuals to see through to the heart of the issues.

Weishaar, though, said Hubbard should do more to address the movie publicly. "The public statements made by the business school administration so far fail to address the conflict of interest issue head on or show any recognition that issues may exist," Weishaar said. "The mere appearance of conflicts of interest in an academic setting represents a serious issue and it is the administration's responsibility to actively work to address these issues, whether they are perceived or real."

But Steele said that the film gave Columbia pause, and that concerns about the school's reputation prompted the administration's reassessment of its disclosure policy.

But Steele also noted that Columbia revised its conflict of interest disclosure policy in 2009, before "Inside Job" made its impact. This policy is not as strict as the policies at some of Columbia's peer institutions—including Stanford University and the University of Pennsylvania—but Steele said it was an accomplishment nonetheless.

"The innovation of the policy reflects an awareness of growing concerns on the part of Columbia as an institution. That's one of the elements why I feel proud of it," Steele said. "Before the movie came out there was a lot of attention to this."

'Not an ivory tower'
Michael Riordan, the chair of the Economics Department, said it is important for Columbia to engage with the issues raised in "Inside Job" in order to protect its reputation for objectivity in research.

"We are not an ivory tower," Riordan said. "It's important for a university to be engaged in policy issues of the day and protect the reputation of objectivity when evaluating those, both in terms of research and public engagement."

Many economists say the potential for conflicts of interest is an inherent problem in academia.

"It's always something that academics have had to address over the course of our academic lives. It's something that as young faculty we ask the advice of older faculty and we ask our students to deal with," Riordan said. "But it's something that has largely been dealt with through personal introspection or personal relationships with mentors."

But in recent months institutions have been looking to formulate clearer policies. The American Economic Association formed the Ad Hoc Committee on Ethical Standards for Economists in January, after being urged to create a code of ethics in a letter signed by 296 economists.

Columbia professors Elliott Sclar, Eric Verhoogen, and José Antonio Ocampo were among that letter's signatories. Noble Prize-winning economist Robert Solow, a professor emeritus at the Massachusetts Institute of Technology, is the chair of that committee.

"It has occurred to me for a long time that conflicts of interest are often a problem and you need strong ways to deal with them," Solow told Spectator. "I wasn't enlightened by 'Inside Job,' though I thought it was a very good movie."

But even those who believe that faculty should disclose consulting work that might present a conflict say that Columbia should encourage consulting. Business School professor Michael Feiner said that consulting work keeps professors informed about the world outside of the classroom.

"The ability for business school faculty makes them better faculty members," Silverstein said. "If they didn't have access to companies they are teaching about, it would be equal to denying me medical literature."

Still, Silverstein emphasized that when a professor is paid to do work for a company, it is important to examine that work with a critical eye.

"In principle, if you are a paid consultant, it doesn't matter how much money you are making," Silverstein said. "Accepting remuneration is to act on behalf of a company."

Ethics education
But despite the discussion taking place among faculty and administrators—and the fact that images of the Business School's Uris Hall were projected on movie screens nationwide in "Inside Job"—the Business School's student leadership has had little to say publicly about the film.

Olivia Albrecht, Business '10, SIPA '11, and a co-chair of the Business School's Student Leadership and Ethics Board, said in an email that "Inside Job" is "a provocative movie that has sparked dialogue within the business and business school community." But she declined to elaborate on that dialogue and on how the ethics board has responded to the film.

Business School Honor Board Chair Amit Paley, Business '11, declined to comment for this story. University Senator Tao Tan, CC '07, Business '11, and the chair of the senate's Student Affairs Committee, said last week he has not seen the film.

Yu said that conflicts of interest have been a "dead issue" among students.

"I think people in the Business School haven't responded because they are afraid," Yu said. "If you are the dean of a school, obviously all the students are going to be dependent on you for their careers and futures. It's hard for them to do anything."

"Inside Job" has also raised questions about whether or not business and economics students at Columbia are receiving a sufficient ethics education. Some professors say questions about conflict of interest, as well as the financial crisis, should compel these disciplines to rethink the place of ethics in their curricula.

The economics department does not offer courses in business ethics, but Riordan, the department's chair, said that it should. He added that an ethics component in the department orientation's program would be especially beneficial for Columbia economics Ph.D. candidates.

The Business School offers several classes that explore ethical issues. According to the website of Columbia's Sanford C. Bernstein and Co. Center for Leadership and Ethics, the Business School incorporates ethics into its core classes as well. The Business School's ethics program was established in the wake of the dot-com boom and the Enron scandal in the early 2000s, Feiner said.

"This [the financial crisis] will happen again," Feiner said, "unless Columbia, and every other business school, understands that they have a role in teaching the best and the brightest how to be on the lookout and on guard to make sure that they don't get co-opted in the system."

He argued that fostering business ethics must be one of the school's primary goals, and that the school needs to do more to achieve that. He noted the difficulty of fitting more material into the curriculum but suggested including ethics in every business core class, expanding its role in the school's orientation, and adding another core course on ethics.

A Business School spokesperson declined to comment on the school's ethics education. Yu, too, emphasized the importance of combating unethical behavior. She said that in the long run, it is not enough for Columbia to protect its reputation—it must address the alleged wrongdoings of its professors.

"Eventually we have to ask if professors such as Dean Hubbard do the things that they are exposed to be doing in the film, do we want such people to be the deans of our business school, where we teach 21st-century ethics and responsibility courses?" Yu asked.

"No one is holy here," she added. "We have to think whom do we want [at Columbia], not just bend to authority because people happen to be the dean."

Correction: An earlier version of this article failed to specify that faculty are already required to report consulting positions and other outside involvements when those interests relate to the professors' ongoing research. Spectator regrets the error.