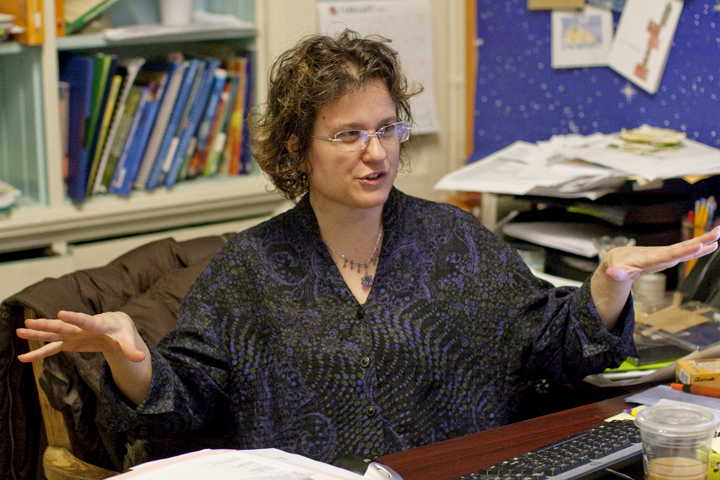 In her first year as principal at Columbia Secondary School, Miriam Nightengale has brought a unique skill set and a passion for education to the job—and students and teachers say that she has revitalized the school.

Since Nightengale's arrival in August, the University-affiliated science and engineering school—which is located on 123rd Street between Morningside Drive and Amsterdam Avenue—has started attracting citywide attention: It is now one of the top 10 schools parents search for on the InsideSchools website, Nightengale said.

Nightengale thinks that CSS "is going to be one of the top-level schools in the city."

"We have the resources to actually prepare students in very authentic ways for college experiences, as well as a teaching staff that regularly brings students in contact with real experiences around their coursework," she said.

Classroom experience
Nightengale has had a variety of jobs in education. She has taught math at Brooklyn Technical High School and in the Central African Republic—in French, while working for the Peace Corps—and before coming to CSS, she was principal at the High School for Law, Advocacy and Community Justice on the Upper West Side.

She also co-founded a Chicago theater company with her brother and lived in Morningside Heights while a student at Teachers College.

"I'm calling on different areas from my past experience that I maybe haven't used in a while," Nightengale said.

She explained that while she "misses the connection with the kids" that a classroom teacher has, she feels that her teaching experience has served her well in the principal's role.

"As a teacher, you have this group of kids that's sort of like a social circle You're not of them—you're apart from them—but your day is sort of defined by them and their personalities and their energy and their cares and their joys, and so that energy is not really present in the principal job," she said. "You have to bring your own energy to it and define your day in ways that a classroom teacher has a day defined for them."

"I like the principal job," she added. "I think there are overwhelming aspects to it where you feel like you can't do any one thing well, which is true of a teacher too."

Bringing innovations
CSS, which opened in the fall of 2007, currently has students in grades six through 10, and it will eventually expand to grades 11 and 12. It received over 1,500 applications for 25 spots in the incoming high school class this year.

The school serves the important role, Nightengale said, of providing science and engineering resources and classes to students who wouldn't otherwise have access to them. Applicants from across the city are selected for admission based on their test scores and academic records, with students from 96th Street and above given priority.

"For the students we serve, which is a very diverse population both socioeconomically and ethnically, we'll be able to place students in science and engineering fields that are currently underrepresented there," she said.

Kaplan added that Nightengale has been a "mentor" for her and the other teachers. In particular, Kaplan said, Nightengale has helped her learn how to reach every student in a large classroom.

"She helps us to develop a better lesson plan," Kaplan said. "And she walks into our classes and observes our classes and calls us for a post-observation, where she goes over all the details she observes."

Students agreed that Nightengale has contributed a lot to the school.

"Our new principal has really been organizing our school and renewing its original purpose of being one of the top schools in Manhattan," 10th-grader Sam Pirani said. "And I feel like she's really organizing the school in ways that it hasn't been before."

Kaplan believes that Nightengale has "brought a lot of innovation to the school" and its students.

"She always takes the time to explain to them why knowledge is important and how they can be better citizens in the future," she said.

Changes and growth
CSS added grades nine and 10 this year, which Nightengale said was an impetus for many of this year's changes. Student government and dances have been developed for high schoolers, and CSS has hired a college guidance counselor and planned college trips.

And even with the ongoing expansion to high school, the middle school is "still very strong," Nightengale said.

"We are continuing some of the things that have always made the middle school successful—the creative approach to the coursework that the teachers have, the work of the teachers to connect what the students are doing to things outside the school, and taking them out for the science classes to Morningside Park to dig in the ground, do investigations on the poor bugs," she said with a laugh.

CSS was founded with Columbia's backing, and Nightengale wants the school to develop its relationship with the University. Qualifying CSS students have the opportunity to take Columbia classes—which Nightengale said is essential for expanding their opportunities—and she hopes more students will be able to do so.

"It's hard with a small school, sometimes, to offer the same range of choices that a larger school could offer," Nightengale said. "But one of the benefits of partnering with Columbia is that we have some of those opportunities to offer them and a larger range of courses because every student can, if they meet the criteria, take courses at Columbia." A 10th-grader who recently took a Columbia history class received a B, she said.

On the whole, Nightengale added, she values her job and the chance to help CSS students.

"You can create a path for our students that can change what their future might be, and so that is something that is very satisfying about the job. And as a teacher you can do that as well, but as principal you can do that on sort of a larger scale," she said. "Being able to graduate students who can manage [college engineering] courses and really survive and thrive that's where we're going, and I think we have a great opportunity to get there."

Correction, Oct. 11, 2012: An earlier version of this story implied that Nightengale was responsible for improving the school's Department of Education progress report grade rise from a C to an A. In fact, the new grade was released after Nightengale started as principal but evaluated the year before she took office. Spectator regrets the error.