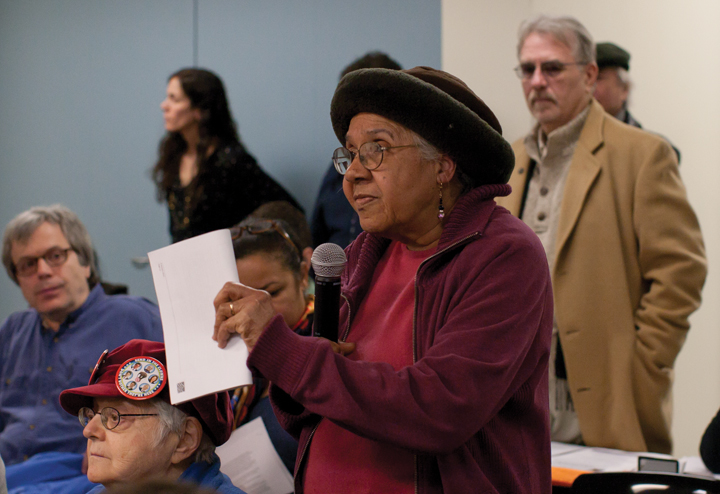 At the CB9 transportation committee meeting Tuesday night, a woman defends Ascension School against criticisms of its outdoor recess.

Students at a local elementary school will be forced to move their daily recess one block north, if some nearby residents get their way.

The stretch of 107th Street between Broadway and Amsterdam avenues is closed for two hours every weekday to allow kindergarten students at the Ascension School, a private Catholic school on 108th Street, to play outside. School officials put up barricades at each end of the block, which is just behind the school, between 11 a.m. and 1 p.m.

But at the Community Board 7 transportation committee meeting Tuesday night, locals debated the school's recess procedures, with some saying that blocking 107th Street every day is a nuisance. Cliff Thorn, who lives across the street from the church school, said that he works from home, and that the recess noise is a problem for him.

"I'm not anti-kids, anti-church, anti-school," he said. "This is a constant issue."

But a vocal majority of residents at the meeting defended the students' outdoor playtime.

"We need to stand behind our community, which is the church and the school," said 107th Street Block Association Vice President Evelyn Lanoix, who attended Ascension for eight years. "I'm sorry about a little bit of noise, but I don't see any problem."

The committee voted in favor of the school trying to hold recess on 108th Street instead, a decision that will need approval from the full Community Board, the city's Department of Transportation, and the local police precinct before it takes effect.

"This block has really taken their share of this, and the school is on 108th Street, so I don't see why this is a problem," transportation committee co-chair Andrew Albert said. "We have to hear people's concerns. They've been out here month after month after month."

Ascension Principal Chris McMahon said that the school would voluntarily go along with moving recess to 108th Street, adding that there are "a lot of advantages" to 108th Street and that he hopes the switch works.

"We're very committed to finding a solution for this," McMahon said. "The advantage for 108th is that it keeps us closer to our classrooms, with teachers looking out the windows."

In addition to concerns about noise, there were complaints from other residents about the nuisance of having the street blocked for two hours every day.

Tony Velella, a resident of the block who uses the citywide disability pickup service Access-a-Ride, said that the blocked street makes it difficult for him to get picked up. The blockage has also "severely impacted" local business, he said.

"We feel that this ought to just stop and not look for some kind of compromise," Velella said. "We've reached the breaking point. We don't want this on our block at all, period."

CB7 member Oscar Rios, who has lived in the neighborhood for 54 years, said that while he understood the concerns, the "children to me are more important than traffic."

"I've never seen any problem" with the 107th Street arrangement, Rios said. "People are standing on the corner, waiting to remove the barricade."

The meeting became rowdy at times, with a vocal group of attendees expressing strong support for the school. At a few points, the meeting devolved into personal attacks, with one resident calling Velella "sick."

"This man is always complaining about something in the neighborhood—something's always annoying to him," Rios said.

Some residents suggested that the kids play in the school gym. But McMahon responded that this wouldn't be good enough.

"Getting them outside and giving them a chance to play in the sunlight is a part of a holistic experience," McMahon said. "That said, the sunlight shines equally on 107th and 108th."

Lanoix said she didn't understand why the committee voted for the 108th Street plan, calling the 107th Street block "the safest block" for the students.

"I'd rather be inconvenienced for two hours" than take the second-best option, she said. "I can deal with it."

"The children are very pleasant on the street," she added. "There are too many studies showing the importance of children playing."

Thorn said that a trial run on 108th Street would be "a step in the right direction."

"Why is it up to us to put up with [noise from] the church and the school?" Thorn asked. In other communities, he added, "the front doors of church are on one street, the play street is another street."