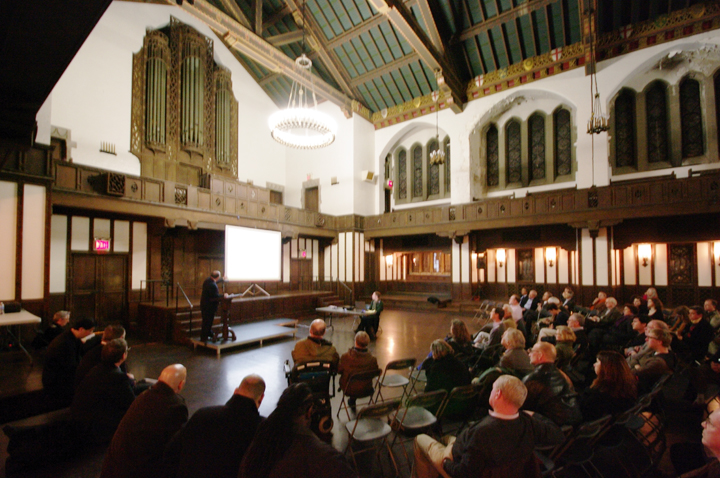 At a community forum Tuesday, administrators of the Cathedral of St. John the Divine unveiled a development proposal.

Administrators of the Cathedral of St. John the Divine unveiled their proposal to build two apartment buildings on the cathedral grounds on Tuesday night, but some locals are still intensely opposed to the development.

At a community forum in the historic Synod Hall on the cathedral grounds, about 50 people debated the proposal, which was presented by cathedral dean James Kowalski, the development's architect, and the developer.

The residential development would occupy the north side of the cathedral's grounds, known as the close, on 113th Street between Amsterdam Avenue and Morningside Drive.

Kowalski said that the cathedral needs to develop the land due to its ailing finances. Its endowment is too small, it runs an almost 10 percent deficit, and there are infrastructure repairs that need to be paid for, he said.

"We've done everything we could have done to balance the budget," including layoffs, Kowalski said. "If we don't find a way to pay for the mission of the cathedral, we're going to go out of business."

The development would be the second set of apartments on the cathedral grounds, following the 2008 construction of Avalon Morningside Park in the southeast corner of the cathedral's land.

"Some people are saying, Why are we doing more?'" Kowalski said. But all along, he explained, "the strategy was a two-prong approach to anchor the cathedral economically."

In 2003, the cathedral made an agreement with the city's Landmarks Preservation Commission establishing that a development on its grounds could only take up a certain amount of space.

"We could have built something much larger ... We restricted voluntarily what we would build on the close," Kowalski said.

The design of the development is still a work in progress, but architect Gary Handel—whose firm, Handel Architects, also worked on the World Trade Center memorial—said that the 140-foot building would take up only 54 percent of the maximum total space previously agreed to, thereby preserving views of the cathedral.

The new development will likely be modeled after the Avalon development. Twenty percent of its roughly 400 apartments will be affordable housing units.

"The idea is to create spaces that are an extension of the close ... a series of more intimate spaces that will lead you around the building," he said.

But opponents of the development weren't swayed by the presentation. Several members of the Morningside Heights Historic District Committee, which does not want the development built, expressed strong opposition.

"As if the first development isn't bad enough, this second one is a true desecration of the close—the viewsheds are destroyed," said Gregory Dietrich, a historic preservation consultant and an advisor to the MHHDC board.

"This truly is—or was—one of the most iconic views of Morningside Heights, and it's going to get even worse," he added.

Meeting attendees were split on the merits of the new development.

"Look up here to see what kind of obligations the cathedral has to take care of the fabric of the close," said Cathedral School parent John Rumely, pointing to peeling paint on the eaves of Synod Hall. "I endorse this project, and keep up the good work."

Michael Henry Adams spoke on behalf of state Sen. Bill Perkins, who represents Harlem and Morningside Heights­­, saying that Perkins "remains opposed to the whole concept of this building site."

"He's not convinced any small gain for the cathedral or small gain of jobs ... would be worth the negative impact on a world-class historic landmark," Adams said.

Speaking on his own behalf, Adams added, "The cathedral got some money for the earlier project. Maybe they'll get some more from this one, but once that's gone, what's next? What will they cannibalize and destroy then? It's not a sustainable thing for the cathedral to take the very thing that makes the cathedral so extraordinary and destroy it."

But Kowalski said that the revenue stream from the apartment buildings would help stabilize the cathedral's finances for the next 100 years, generating hundreds of millions of dollars. This revenue would contribute not just to the cathedral's operating budget but to its endowment, infrastructure repairs, and preservation, Kowalski said.

"We're not talking about some petty amount of money the cathedral has squandered its future for—we're talking about being good stewards of this property and anchoring its future," he said. "This is not a desperate or frivolous effort."

Some attendees said that the Episcopal Diocese of New York should help the cathedral with its finances so that it doesn't need the development, with several mentioning the wealth of Trinity Church in the Financial District. Trinity owns 6 million square feet of downtown real estate.

"This diocese has within it the richest church of Protestant Christendom," Community Board 9 member Brad Taylor said.

Kowalski said that Trinity is not "hoarding" its revenue but using it in its international mission.