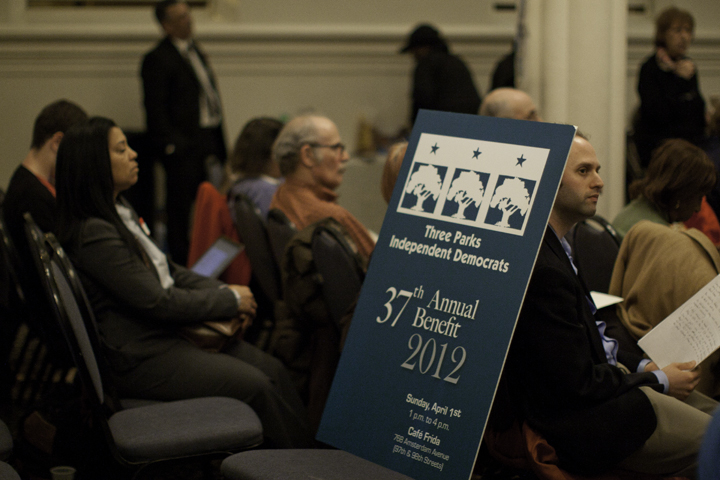 Member of Three Parks Independent Democrats voted to endorse Rep. Charles Rangel. They will help canvass the Upper West Side for signatures for him.

Rep. Charles Rangel picked up another Upper West Side political club endorsement Wednesday night, as the Three Parks Independent Democrats voted to support his re-election by a wide margin.

The endorsement means club members will petition for Rangel, helping him collect the 958 signatures needed by April 16. It comes a week after the Broadway Democrats, a Morningside Heights club, also voted overwhelmingly to endorse him.

Rangel got 59 percent of the vote, with 41 votes to 10 for challenger Joyce Johnson, 10 for State Senator Adriano Espaillat, and 9 for no endorsement.

Although he has not officially entered the race, Espaillat said last week that he would decide on whether to run in "a week or two." If elected, Espaillat would become the first Dominican-American in Congress.

Three Parks members voted just two days after documents were released by the Federal Election Commission detailing a $23,000 fine that Rangel will pay for illegally using a rent-stabilized apartment as a campaign office.

But several Three Parks members said the fine—the latest in a string of ethical violations—didn't make a big impact on their impression of the congressman, who has held his seat for 41 years.

"If that's the worst thing they could find in all his years in Congress—well, everybody's done something wrong, you and me, too," said Rangel supporter Stephanie Tegnazian.

"Well, I'm a pragmatist and I know he's not perfect, but he's served us well," Jock Davenport said. "His heart's in the right place in terms of the broad picture. The other candidates are going to have to wait their turn—he's not immortal."

Daniele Gerard, president of the club, said that Rangel's local connections helped him.

"A lot of people in our club have long-standing ties to Charlie," Gerard said. "He helped get drugs out of the [Frederick] Douglass Houses," just down the block from the youth hostel where the vote was held, on Amsterdam Avenue between 103rd and 104th streets. "People have long memories."

Many of those ties on the Upper West Side may not prove helpful come election time after a federal magistrate redrew the state's congressional district lines last week. The West Side, from 122nd Street south, will now be represented by the seat held by Rep. Jerrold Nadler, CC '69.

Other club members said they would be happy to see Rangel move on. Janet Harvilchuck, who voted to not endorse any of the candidates, said that she has "not been very moved" by any of Rangel's challengers.

"I don't think there's a great candidate quite yet," Harvilchuck said. "I feel that Rangel has shown he's really not worthy of continuing as our representative."

"I think it's time for a fresh start with someone who doesn't have any ethical improprieties in their background," Betsy Malcolm said. An Espaillat supporter, she said that the state senator from Upper Manhattan has done a good job so far. "I don't think any of the other challengers are sufficiently qualified for the job," she added.

Alex Colgan, who lives in Hamilton Heights, compared the primary to the election in 1970 that transferred the seat from Adam Clayton Powell, Jr., who had served 26 years in the House, to Rangel.

"What's happening now is quite similar, but now it's Espaillat" in Rangel's old role, Colgan said.

He added that Rangel's health problems—the Congressman spent much of February away from the House, his longest absence since 2002, according to the Wall Street Journal—may be an issue for voters to consider in the primary on June 26.

"Rangel has had his day and he's been in the hospital for a number of weeks," Colgan said. "That could be more serious than a bad back."