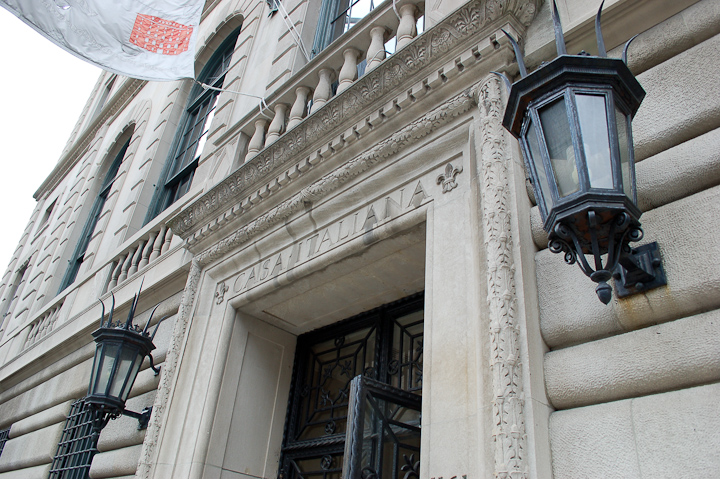 An organization is suing the Italian Academy, on Amsterdam Avenue at 117th Street, claiming it has abandoned its original mission.

The Italic Institute of America filed suit against Columbia in New York State Supreme Court on Aug. 22, in collaboration with the descendants of three families that donated $400,000 toward the construction of the Casa Italiana and contributed to its more than $280,000 endowment. The institute and the families believe that the Italian Academy has failed to follow through with the donors' original vision.

The Italic Institute is suing Columbia after spending four years attempting to talk to University officials about its concerns.

"We've been appealing to the authorities at Columbia to discuss this whole question about the library, about the mission of the Casa Italiana, and we've gotten nowhere," Italic Institute Executive Director John Mancini said. "We've made many attempts to sit down with these people, but they don't want to talk to us."

The Casa Italiana was built in 1927 "for use by the University as the centre and seat of its work in the field of Italian language, literature, history and art," according to the Donative Parchment, an agreement between Columbia and the donors.

But in 1990, the Casa Italiana was renamed the Italian Academy when the Italian government signed a charter with Columbia, agreeing to buy the building and lease it back to the University while providing $17.5 million for programs and renovations.

A Columbia spokesperson and an Italian Academy spokesperson declined to comment, saying that the University does not comment on pending litigation. But in a December interview, David Freedberg, the academy's director, referred to the 1990 charter established with the Italian government as an important document that guides the academy's decision-making.

"We have certainly followed all the aims of the charter, the principle of which is to encourage advanced studies into all aspects of Italian culture and science," Freedberg said.

Jo Ann Cavallo, the Italian department's director of undergraduate studies, questioned whether the Italian government should have been allowed to purchase the Casa Italiana in the first place, calling the situation "highly problematic."

"This effectively establishes an Italian government enclave within Columbia University," Cavallo said. "Plus, at the time, the $17.5 million received from the Italian government was falsely reported as a gift,' until my former colleague Luciano Rebay exposed the transaction as an outright sale of property."

The Italic Institute said in its court filing that Columbia entered the arrangement with the Italian government "without seeking input or approval from the Donor Families," at which point "the primary mission statement of La Casa was changed—and it should not have been."

Harvey Dale, a professor at the New York University School of Law, said that in the case of a charitable donation, donors do not have the legal standing to challenge how the recipient uses their money.

"In my view, it is quite likely that Columbia will make a motion in the litigation to dismiss the litigation on grounds that the plaintiff doesn't have standing," Dale said.

The Italian Academy has functioned primarily as a graduate-level research center, sponsoring fellowship programs and hosting University programming. But the academy is lacking in undergraduate participation, and most undergraduates can't even get into the building, except during events.

The Italic Institute argued in its complaint that the academy should return to the original goals of the Casa Italiana by making several changes, including allowing students to meet and study in the building, and giving the Italian department the chance to return to the building.

Cavallo said she regretted when the Italian department was forced to leave around the time the charter was signed. "We lost part of our identity because the Casa served as a vibrant space to foster Italian studies among faculty and students," she said.

In its court filing, the Italic Institute also asks Columbia to work on "establishing an undergraduate program in Italian Studies," even though the University already has such a program. Mancini said that the Italic Institute wants the Italian department to expand its offerings, saying that it does not begin to cover "3,000 years of Italic history" or offer courses on Italic philosophy or political thought.

But Freedberg told Spectator in December that "we are a research institute, not a cultural house" that caters to the student body at large.

"People are doing research here, and there's no reason for people to come in but when there's an event," Freedberg said.

Carla Paterno Darlington, the granddaughter of donor Charles Paterno, said that she would like to learn more about how the academy's endowment is being used, particularly concerning the books her grandfather donated.

Darlington said that her family has remained connected to Columbia—both her husband and her late son are Columbia College alumni, and since 2000, she has given the Charles Paterno Barratt-Brown Memorial Prize in English, named for her son.

"I'm so sorry that it's come to this," Darlington said. "I love Columbia ... We don't want to make a lot of waves, but we just want some answers."